These are, “Wicked headphones brah.” Philips “The Stretch” headphones, also known as “SHO9560/1” for those who like to get technical, are the brainchild of a collaboration between Philips, the electronic company who makes almost everything from clock radios, to TV’s, to some of the best CD transports ever, and O’Neill, the surfing apparel maker. Yes, the fact that this is the product of the unholy matrimony between electronics and clothing would lead you to assume that this headphone, well, sucks. I mean look at other fashion headphones like Skullcandy (south of $100) and WESC. Those are pretty mediocre headphones. So, by the transitive property, these must suck too. Well, not exactly…

Why is it called “The Stretch” you ask? Well, as shown by the title picture, these things are super stretchy. I mean REALLY stretchy. I can probably make the cups face downward, but I’d prefer not to because knowing my luck, I’d even get these to snap. So, why is it super stretchy you ask? Well, the headband is not made by normal plastic. To increase durability (Although since these are marketed to surfers, who probably prefer not to use electronics while surfing, I don’t see the point in this, but I digress), the headband is made of a magical mystical material called TR 55LX “Super Stretch Nylon.” It’s pretty cool if you ask me. Maybe Sennheiser should take a few notes for a few of their headphones… ;)

As much as I’d love to do a section about unboxing and how fantabulous the packaging of these headphones are, my pair is an open-box pair I bought for $17. The only packaging was a large plastic bag. I’m sure everyone knows what a plastic bag looks like, so moving on!

The overall feel of “The Stretch” is of very good quality at its retail price point. Like I said, the headband is super stretchy, and exudes durability, which is great in a world of cheap Skullcandies that break every three months. As you can see, these headphones have a double headband. The other headband is made of a wetsuit-like material on the black version, SHO9560, and apparently the white version, SHO9561, is made of leatherette. The cups themselves are covered with a rubberized finish. The pads are slightly disappointing though. Yes, they are comfy (circumaural) and the pleather is of respectable quality, but when I looked at the back of the pads, to my horror, there was not pleather on the back of them, but a fabric mesh, exposing the foam. What’s the big deal? Well, this pretty much acts as a treble sponge.

There is also a polyester sheet covering the driver, which I assume is also detrimental to the sound. Peeking at the driver, it seems that it’s ever-so-slightly angled. Nice touch. It doesn’t help much with the soundstage though. The cable is sheathed well, but I ask why it must be pink? Other reviews say it’s red. Philips says it’s “Bordeaux,” whatever that means. I realize that this is the “O’Neill color,” but does the cable have to be this garish color? The saving grace is that they’ve implemented a cable is made of two sections. A two inch cable comes out of the cups and is terminated by a 3.5mm plug. Then another cable is connected to that. That way, if the cable gets snagged, supposedly the cable comes off. Well, I don’t know about you, but if I’m in a situation where this would happen, the headphones would be yanked well before the cable comes off. Still, it makes for easy cable replacement, and for those Nano, Clip, and Shuffle users, you can just plug your DAP in and walk around like a boss. 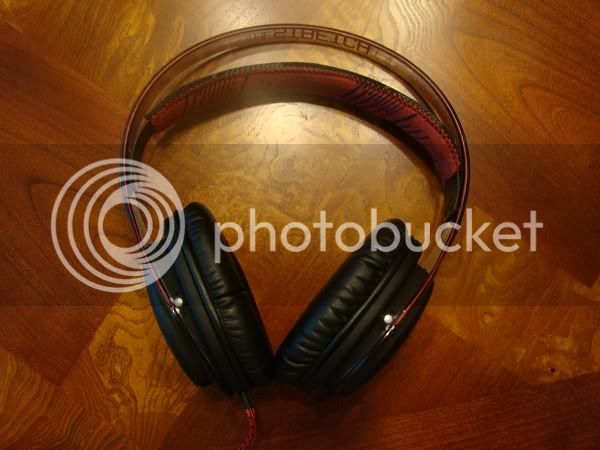 Well, these seem to look like a “hipster-ey” headphone (but everyone knows THE definitive hipster headphones is made by Grado), so I tried them out with a soulful band I heard at a coffee shop once. The album I used was Genesis Underground by Eye Alaska. I plugged them into my EMU 0204 and…despite the negative comments I’ve read by a few, I liked them. The bass was a tiny bit bloated and “one noted,” but it still managed to not be slow. The mids were a bit unimpressive though. It’s as if a veil separated me from the band. I hypothesized that the pads were to blame, and pushed the headphones closer. Ahh, there’s the band. Treble is a bit above neutral, which is surprising considering what they’d done to restrain it. Detail is a bit mediocre. Cymbals sound artificial, and instruments can get a bit smeared. Soundstage is small, but positioning is okay. However, these like a good source. Plugged into by Blackberry Bold, it sounded terrible. Bass was much less controlled, almost muddy. Mids were more veiled than prior to ampage, and treble was screechy. Along with that, everything was muddled together.

So after 5 hours of burn in (the drivers are probably burned in by now), the sound didn’t change much. I’ll change this if the sound dramatically changes somehow though.

So, what do they sound like? Well, they’re a warm headphone, lacking in mids and overall treble clarity, but making up for it with bass that can go crazy deep (20hz) without breaking a sweat. Soundstage is small to average and the closedness of them call for a lack of air and spaciousness.

For the rest of you

Since this is a mainstream headphone, a “mainstream” sound is in order. This being so, most people like bass, so these are consequentially bassy. However, the bass is much better than I expected it to be. It actually has some texture to it. Electric bass had distinguishable notes, bass drums had decay and didn’t just sound like “boom!” The part that surprised me the most is that the Stretches easily reached down to 20hz, and was only slightly quieter than 100hz. Pretty impressive. That’s where the praises end though. Like I said before, the bass can get a bit too boomy at times, and had the dreaded “one-notedness” at times. It also is very mushy without much definition. At its worst, the bass can creep a bit into the midrange.

The midrange is the most disappointing aspect of this headphone, which is to be expected. You can’t have bass and treble without subtracting mids. However, the lower midrange is accentuated because of the weighty low end. Sadly, vocals just don’t sound real. It’s as if you’re listening to them through a curtain, and their mouths were covered with a layer of felt. Guitars sound muffled and twangy as well. Other instruments just didn’t have the right timbre, which isn’t much of a surprise. However, the mids have a slightly smoky sound, making female jazz singers fun to listen to. So, yeah, mids are a disappointment for the most part. Shame.

Taking the fabric off the driver confirmed my hypothesis. The mids came out after removal. They now sound quite nice. Still recessed, but they’re more upfront and less veiled. They’re colored (far from realistic), definitely, but much more acceptable. They’re tipped up in the lower mids and upper mids.

The treble is very average of a V-shaped sound sig. It’s slightly bright, but never harsh. There are times where it can get a bit stuffy, especially with flutes and soprano singers. And detail lacks in general. Not really much to say about it. It’s neither smooth nor harsh. Not detailed, nor is it horrid. Good job, Philips, I think.

Soundstage is slightly aided by the angled drivers, but it’s still a small soundstage. As before, positioning is okay. Detail is very average too, likely because of the meh treble. Plucks are somewhat discernable, but you’ll have to strain to hear minute details. They really aren’t very quick either. Don’t try super-complicated music with these. They also have “closed can syndrome.” In which the sound is claustrophobic and completely lacks air and spacing around instruments and such, struggle with complicated, layered music.

Wait A Minute! Users Without An Amp, Read the Following

Now, I had always run them from an EMU 0204 (It has a semi-mediocre amp). I tried listening to them from a DAP because a Headphiler commented that they have a bit of a honky midrange and found that the sound greatly suffered. For starters, the bass lost a lot of control–it was loose and flabby. The midrange did have a distinct honk I did not notice when amped. (It became apparent that I wasn’t listening hard enough though, because when I tried amping them again, they retained some honk in the upper midrange/lower treble). The treble was borderline excruciating with the wrong song. So…yeah either get a CMOY or a strong DAP if you want to use these as portables.

So, does Philips have a winner here? For $80, it’s a stretch. (heh) The sound is nothing spectacular (Only slightly better overall than a Portapro in my opinion), but they are pretty durable. I mean, look at the headband. That’s a pretty durable headband. These are a portable headphone through and through, and to judge a portable headphone is hard. I take durability over overall sound quality in this situation, because I’ll be stuffing this sucker wherever it fits. If an Ultrasone Edition 8 were to ever fall into my lap, I’d be hard-pressed to take it outside with me. Sure, it may have amazing sound, but if I lose it or break it, well, that’s $1200 down the drain.

As such, it makes a crappy portable in my opinion, even though thieves probably don’t know what it is and likely won’t steal it. So, will I recommend it? It’s a tough call at the asking price if you’re a newbie looking to get into audiophilia. Sure, it has the familiar bassy sound everyone is looking for, but these just aren’t very clear sounding. (If anyone wants a point of reference, I think these sound like a Beats Solo with much better bass and a warmer midrange.) I’d take the Sony V6 every time for an $80 portable. However, it’s easy to find these online for around $40 new, or less than $30 used. At that price, for a portable, it’s a screaming bargain for a fun headphone, even if an amp is almost a must.

Oh, and this isn’t that last you’ll see of these headphones. The reason I bought these is because I wanted a cheap, but decent headphone to create a modding guide for. These are the guinea pigs.