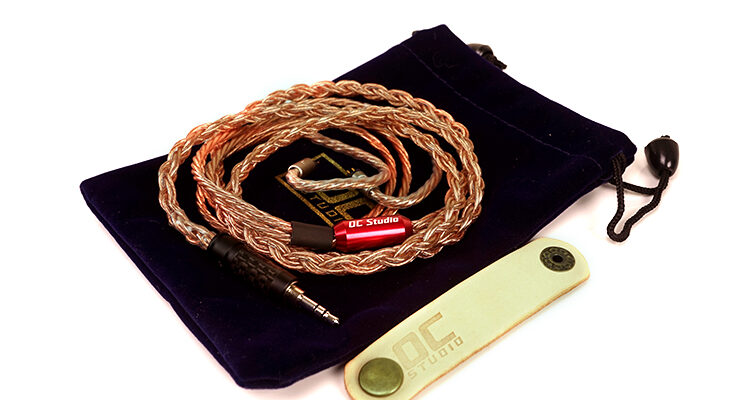 I would hesitate to describe the Orpheus MK5 8-wire as a basshead dream because there is so much more to it than that. However, if you are moving from 4-wire silver or a stock OFC 4-wire cable the first thing you are going to notice is that massive increase in dynamic range. The superior DR of the Orpheus MK5 is going to make any source sounding fuller, punchier and more holographic sounding.

Now combine this with an inherently thicker or richer timbre, especially in the low-end, that good copper cables are known for and the net result is a powerful, almost explosive sounding presentation. There is a degree of warmth in the Orpheus MK5 which isn’t surprising but this is not an overly dark sounding cable either.

What you may not expect from the MK5 is the solid treble performance which helps keep the Orpheus MK5 from straying too far into the “dark side”. It certainly helps keep a good harmonic balance to the Orpheus MK5 despite its low-end prowess. Instrumental timbre is meaty but well defined

Like the Ares II 8-wire, there is far less high-frequency attenuation in the treble performance of the MK5 compared to lower gauge/lower wire copper variants. Cables such as the Ares II 4-wire and the Astral Acoustics 4-wire will sound smooth but far less expressive and definitely more relaxed sounding at both ends of the spectrum.

Staging on the Orpheus MK5 is very impressive. It is both deep and moderately tall but maybe not quite as wide-sounding or as airy as the EA Ares II 8-wire. The cleaner and peppier treble will prevent the cable from robbing monitors of air and headroom. Instrumental separation on the Orpheus MK5 is a clear upgrade on both of the Ares II and Taurus 4-wired versions and absolutely stomps on any Plastics One variants you get as stock.

The level of resolution is also excellent. I would expect that from a well-crafted 8-wire’ superior dynamic range and better high-frequency reproduction when compared to a 4-wire. However, to achieve the level of richness in the timbre of the MK5 without sacrificing clarity and separation is a difference maker at this price point.

This is my favorite pairing outside of the much more expensive Janus Dynamic from Effect Audio. The Layla with the stock cable can seem quite dark in comparison with far less dynamic range. Its treble performance lacks a bit of air and the low-end is quite soft sounding. At times the OFC 4-wire stock can inject a little too much even-harmonic bias leaving you wanting more ‘bite’ in the Layla’s presentation.

The Orpheus MK5 really opens up the staging of the Layla with far better treble clarity and a snappier more powerful sounding low-end. The harmonic balance also improves with that treble clarity. Instrumental timbre is still rich, thick but it now has a little odd-harmonic presence that prevents it from sounding overly rounded.

This is a combination decidedly not for neutrals as I still find the mix to be on the darker heavier side but natural enough sounding to really gel well with synth wave and hard rock genres. 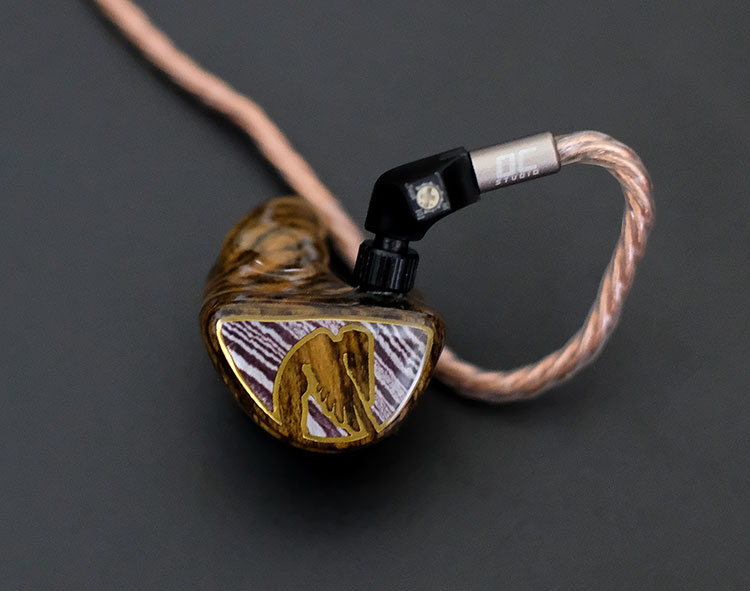 This is an expensive custom monitor and for the price, the stock cable is simply not going to do it justice. Throw away that 4-wire black OFC cable because with it the VE8 sounds anemic, compressed and lacking in power which it clearly has with the right cable.

The Orpheus MK5 will not only open up the VE8 substantially over the stock cable but it will also tease out an excellent level of low-end impact and detail. Do you want to hear how well the VE8 can do layering? Particularly in the low-end? Then this is a good cable to hear it for not so many pennies.  This is a much more aggressive tone but at the same time, it is not an overly warmed up fuzzy tone. The excellent treble performance of the MK5 cable will provide a healthy balance to the VE8’s bass power.

Like the Layla, the VE8/MK5 cable is not for neutrality lovers. This is a colored, aggressive, and lively tone that pairs wonderfully well with any beat heavy genre. 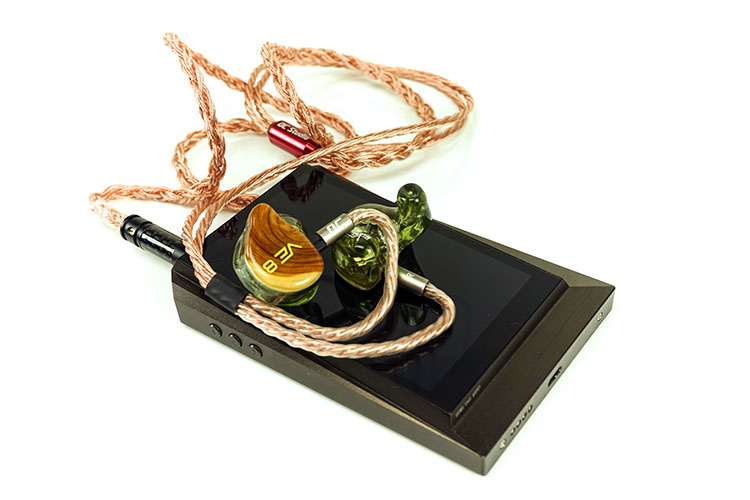 The Katana in its stock form is a neutral to natural high-end monitor. It has less low-end girth than either the VE8 or the Layla but does have a tremendously good performance when it comes to detail, imaging and top-end articulation.

With the stock cable, I tend to find it only has a minor sub-bass uptick for depth and weight and a lot more lower-treble forwardness that upsets its harmonic balance making it sound a little lean and on the bright side.

The MK5 pairing immediately beefs up the sub-bass response yet I do not find it overly warm and mushy in the mid-bass. Instrumental timbre stays closer to neutral but sounds a little more natural, slightly weightier than before but nothing you would call euphonic. The staging is far more open with that switch to 8-wire, particularly width and depth. It still has a nice articulate top-end but its not quite as pervasive as before and not quite as lean.

Though I believe you can possibly have a custom made 8-wire Taurus the stock availability is a 4-wire. Perhaps not a fair fight but the pricing is almost the same between them both in Hong Kong. Astral Acoustics itself is based in HK, the Taurus was their freshman copper cable launch.

This a 4-wire Type 1 7n OCC Litz configuration. It is a much lighter cable than the 8-wire Orpheus MK5, however, its jacket is a little stiffer than the M K5 PVC jacket. Thus, it is a bit more flyaway for me and harder to control. The braiding is also a bit looser meaning it retains a little more memory when unwinding.

The Taurus copper sound is a little more relaxed sounding than the Orpheus MK5 with more of an emphasis on warmth than aggression and a slightly euphonic instrumental and vocal timbre. The MK5 is the thicker, more authoritative of the two. The Taurus is more like the Ares II in that respect with a warmer but slightly more balanced low-end. Part of that is to do with the jump to 8-wire which always increases the dynamic range but beyond that in terms of pure tone, I find the MK5 to be the more aggressive sounding.

The other factor is the slightly more forward vocal and treble presentation on the MK5. The Taurus top-end is more laid back, perhaps even smoother to the ear than the MK5 so it doesn’t quite have that lively percussion sound that the MK5 can deliver using the same monitors (in this case the 64 Audio A18).

The Effect Audio Ares II 8-wire is one of the company’s special custom builds and you can buy it for $300. It is perhaps one of the major competitors against the OC Studio Orpheus MK5 given that it is also a copper-based 8-wire and only marginally more expensive on the international market.

The Ares II 8-wire is a UP-OCC 26AWG 8-wire 1.2m IEM cable with a slightly higher price point to the Orpheus MK5. Despite their similar wire count, the Orpheus MK5 is physically a small cable build meaning it is slightly lighter and a little more pliant. The lighter build of the Orpheus MK5 is also a little comfier around the ear than the bigger Ares II 8-wire. Both have the exact same hue and tone from their wire and side by side you cannot tell which is which save for the physical size of the Ares II 8W cable being bigger.

OC use in-house branded terminations for the MK5 including a cryo-treated OC 35CFRT 3.5mm jack and TCGP 2-pin gold plated 0.78mm sockets. Both cable jacks have a carbon print finish and both use slide-on and off chrome plated connector barrels with their logos on the side as well as clear L/R on each side. 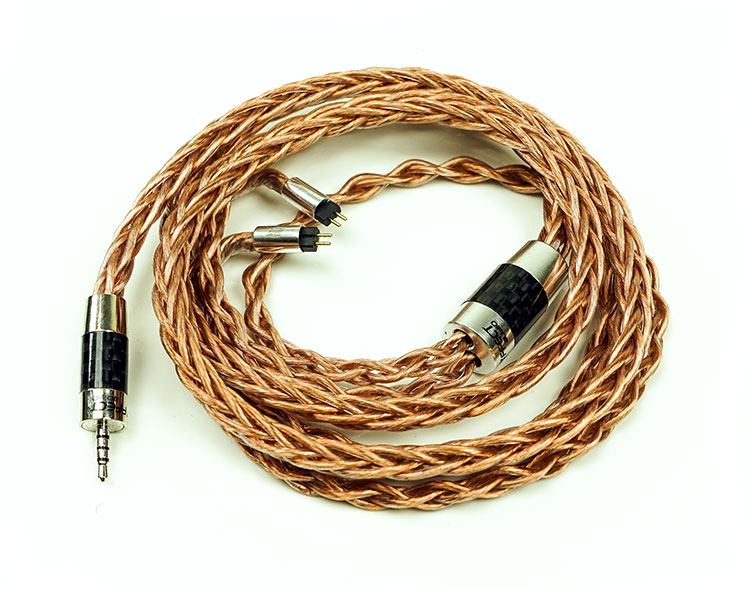 The MK5 is a thicker or denser sounding cable than the Ares II 8W. It has more low-end heft and physicality than the slightly lighter but still punchy Ares II 8W.  The Ares II 8-wire, however, has a slightly wider staging capability and a cleaner more neutral sounding midrange.

Overall, I would pick the MK5 for the better low-end weight up to the lower mids and the Ares II 8-wire for the slightly wider midrange and greater treble extension.

For $250 the OC Studio Orpheus MK5 is a seriously great sounding copper cable. If you can buy it at those Taiwan prices it becomes an absolute steal for anyone with a good custom monitor who wants to chuck out their stock cable.

It provides a weightier, slightly darker, alternative to the Effect Audio Ares II 8-wire and manages to be a touch easier to physically manage despite being a gauge higher. Certainly, it is a step up on the 4-wire Taurus which has a similar price. Though I would say the Taurus may suit those who like something a touch sweeter and more laid back.

Gear like this makes me miss our value for money score which we stopped using a few months ago. Certainly a 9+ in that regard and it does make me wonder why on earth the Western audio world has not heard more about OC Studio cables. A no-brainer here guys!