The MPOW H21 Noise Cancelling Headphones is an ANC enabled closed-back portable headphone featuring BT5.0 and up to 40 hours battery life. It is priced at an SRP of $103.99 but Amazon US currently sells for around $79.99.

Disclaimer: The MPOW H21 Noise Cancelling Headphones are a sample sent to us in exchange for our honest opinion in this review. We thank MPOW for giving us this opportunity.

To learn more about our ANC reviews on Headfonics you can click here.

MPOW is a company that was established in 2013. In their 7 year history, they have had numerous achievements, including 2 red dot awards for their headphones, and being recognized as a top 5 seller on amazon.

Their track record seems impressive for such a fledgling brand. They are known for bringing a more premium product to the mass market, and I’m looking forward to seeing how they do with their latest entry into the ANC Bluetooth headphone scene, the MPOW H21. 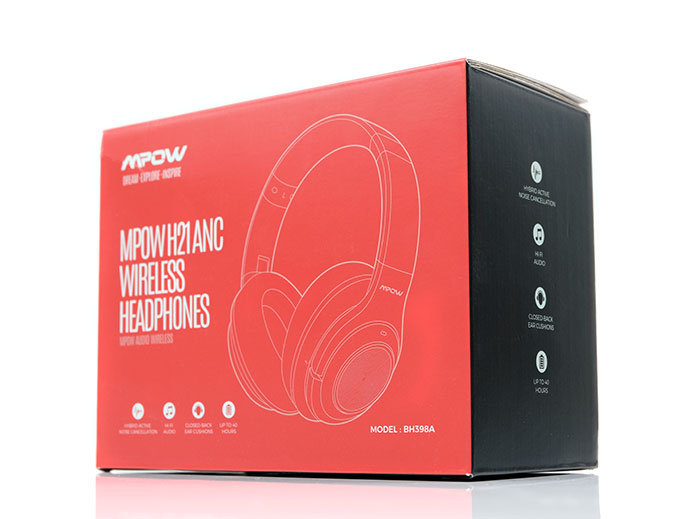 When I received the package of the MPOW H21, it was immediately evident that the packaging was spartan. It was just a simple cardboard box, that would just serve the purpose of transporting the headphone and making sure that it won’t be dead on arrival after shipment. Flipping open the box, I was greeted with a soft faux leather pouch that contained the headphone. 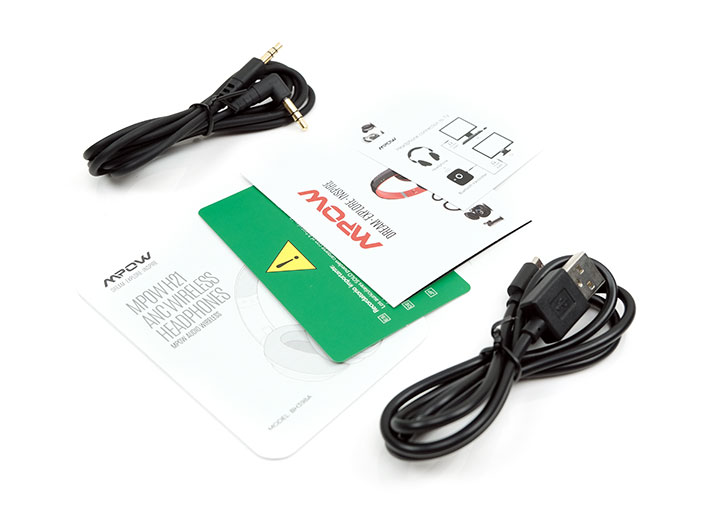 The package came with an instruction leaflet, some marketing materials, and 2 wires, a micro USB to USB type A, and a 3.5mm straight to a 3.5mm angled jack. Standard stuff that could be expected from a Bluetooth headphone package.

The H21 was built mainly with plastic but has metal and leather in all the right places. The headband adjustment has metal adjustment mechanisms that would give me peace of mind when I adjust the headphone on my head. The leather is soft enough, but also gives me the impression that it’s also quite thick so that it won’t easily break or tear.

The Left and Right earcup markings are on the top part of the inside of the headband engraved in metallic-coated plastic, which is quite subtle, so it might need some getting used to before they are easily located when wearing the headphone.

The rest of the build is just plastic, but the plastic feels thick and sturdy. The finish on the plastic is also very smooth, and matte, which would prevent minor scuffs and scratches once the H21 goes into daily driver duty. 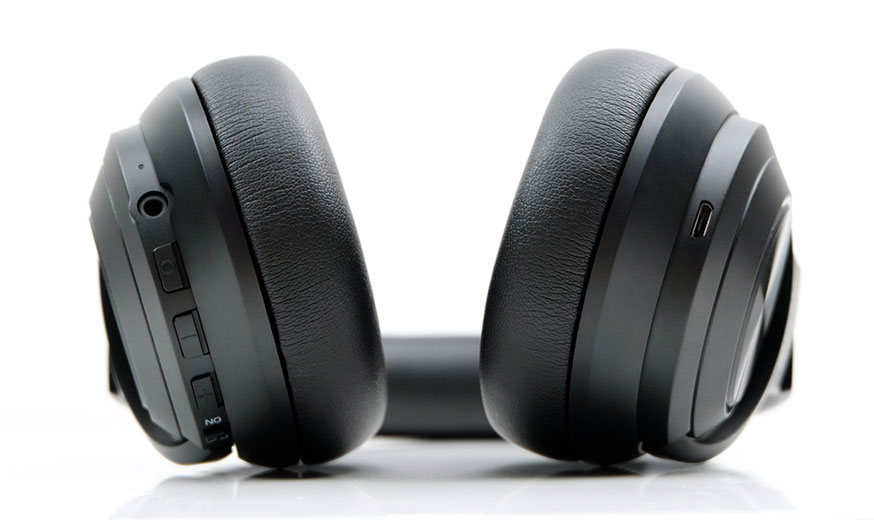 The buttons are on the bottom of the right earcup, they’re a bit small but very sturdy and well built. The ANC can be turned on and off using a physical switch near the volume buttons, which is more convenient and contributes to a more ergonomic design of the overall button layout, preventing accidental wrong presses.

The earcups also can be folded into the headphone, making it more compact when put inside the pouch for traveling. I would have wanted a proper hardshell case though so that I wouldn’t have to worry about throwing it into a stuffed backpack every now and then. 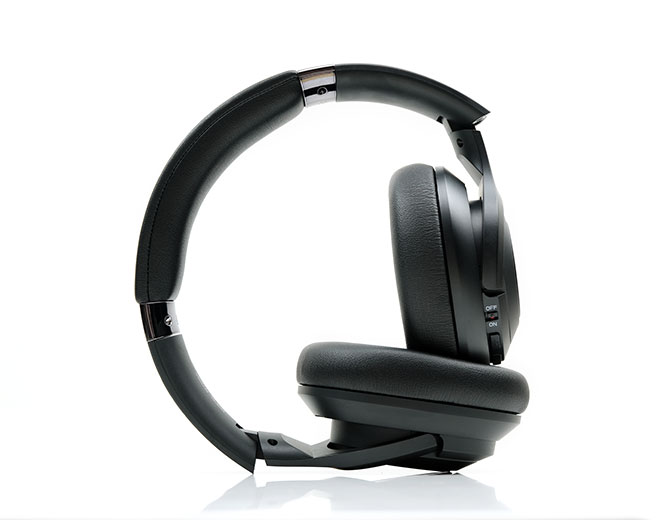 Comfort-wise, the headphone wouldn’t give me any problems. The earpads are soft enough, but not too soft that it would be squished when you put it on your head. Clamp force is also properly calibrated as long as the H21 is properly adjusted to my head, meaning there’s a sweet spot of it to sit right on my head.

The H21 won’t shake loose when banging your head to rock music, but would also not apply too much pressure on your head that it would need adjustments every few minutes. They also don’t weigh too much on my head, so there aren’t any hot spots on my head.

The oblong-shaped ear cups were also a good design choice since it would help ensure that the earpads wouldn’t touch any part of the ears when the H21’s are on. Overall, these are comfortable enough to wear for long periods of time.

When the H21 is going to be used for long haul flights, or long commutes, the Active Noise Cancelling feature will be useful. Engine noise from planes, trains, and buses, tend to be of the lower frequencies, and the H21 was able to filter out the right frequencies to do a good job of isolating you from all the noise around when in a longer commute.

The sound quality changes a bit though when the noise canceling is on. With ANC on, it feels like my ears are suddenly in a very empty space as if I were in a vacuum. It feels like my ears are being pulled out a little, so ANC might be a little bit too much for some who are more sensitive to this. I personally don’t quite like the noise canceling on unless it’s absolutely necessary. 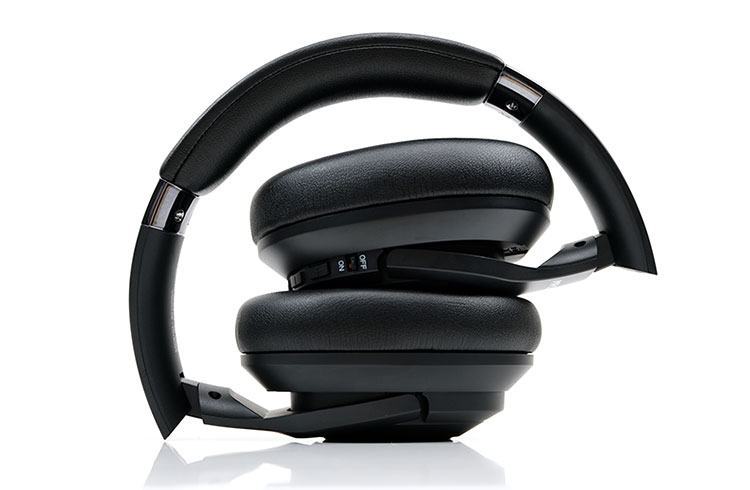 Bluetooth on the H21 just runs the SBC(sub-band coding) over Bluetooth v5.0, without any of the fancy APTx, AAC, or LDAC codecs that are available today. Despite just running on SBC, the connection is seamless and convenient.

Once the H21 has been properly set up, connecting to the H21 will be as simple as turning it on, and it will automatically connect to your phone or music player. The range of the Bluetooth connection of the H21 was never an issue, as it allowed me to freely move around my house while my phone was still on my desk.

With the latency of SBC being rated at 173ms, we can be lead to believe that the H21 would not be suitable for time-sensitive applications, like games, and watching videos. I tried it with both, and the latency doesn’t seem to be perceptible despite what is written on paper. Since the H21 is just running on the SBC, listening to hi-res audio above 328kpbs will not be possible, so the codec might become the bottleneck in certain situations.

Both the mic and the headphone itself functioned properly during the calls, and there was no noticeable latency or dropouts during the call. It was as good as directly using my phone to make the call.

The battery life of the H21 is rated at 40 hours, but they seem to last longer than 40 hours. They arrived at my doorstep fully charged despite being stuck in shipping for more than a month, so I’m sure that they can hold their charge really well. After around 5 days of use, with noise-canceling mostly off, the battery died, which is pretty much what the battery is rated for as written in the box.

Unfortunately, charging the headphone will take a while longer with the absence of a fast-charging option, as I had to have the headphones plugged in for around 2.5 hours before I got a full battery again. 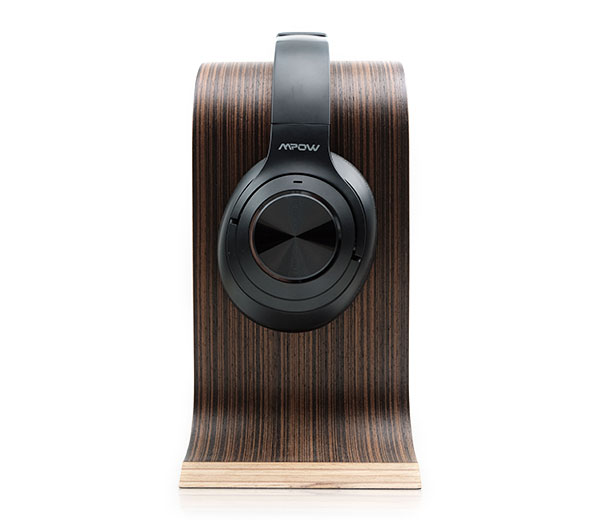 Although bass for the H21 is controlled, it doesn’t make the H21 boring at all. There is a good amount of bass, while not bleeding into any of the other frequencies. The bass rolls off a little bit early, but it doesn’t take too much away from the enjoyability of these headphones.

While the impact of drum beats are present, the decay of each beat seems to disappear too quickly to be natural. I think this is due to the driver not being fast enough to present bass decays well. Bass impact is also very present and clean, even in more complicated passages, where there are different drums being played, they tend to still sound distinct from each other.

Overall, the bass is good for the price point, although the H21 may lack some bass clarity at times, it manages to present the bass with much impact and control.

The midrange is one of the strengths of the H21, as it is able to present midrange information properly, where the male vocals and female vocals are both textured. Although the vocals are clear with the H21, there is a slight veil in the sound though, but it’s only noticeable when compared to much more resolving headphones.

With no other frequencies encroaching on the midrange, the vocalist really stands out with the H21. For vocal-centric tracks, the H21 is well designed to present details and nuances from great vocalists. Although the mids might become a little forward at times, they still play nicely with the other parts of the music.

Despite being both closed-back, and Noise Cancelling, the H21 seems to have some sound stage depth. I can hear differences in the distance of instruments from far left, and near left, or far-right and near right. The center image can also be perceived with well-recorded tracks. When I started listening to the H21, I thought there was a different set of speakers playing in the room, but it was just the H21, playing on my ears.

Imaging on the H21 was well executed, as the vocalist and the instruments are made distinct from one another. Although not at the level of open-back headphones, for a closed-back Noise-canceling headphone, I think the H21 presents the sound stage and imaging quite well for the price point.

Despite a slight midrange emphasis and a slightly recessed treble, the H21 is still able to present a coherent sound signature. The H21 is able to let present each part of the sound properly, without letting any frequency become the focus. One bonus for me is that the H21 actually has some imaging and sound stage, and is pretty food for a Closed-back Noise Cancelling headphone at this price.
External DAC 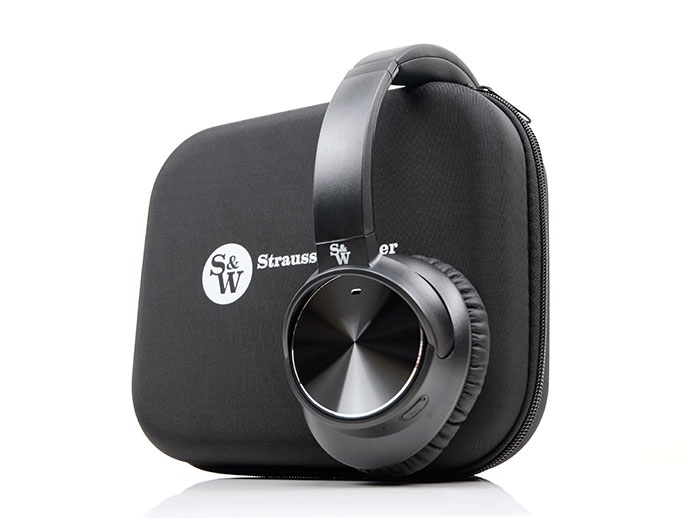 The MPOW H21, and the Strauss & Wagner ANCBT501, is really a pair of headphones with stark contrasts. From the moment that I received the headphones, to the times that I was listening to both of them, it’s evident that the 2 companies have different priorities.

The H21 has quite a few things in common with the PXC-550, the most prominent being that both of them have a similar sound signature. They’re both inoffensive and have a good midrange presentation. They also both have impactful, but clear bass, and a good midrange.

Of course, at the higher asking price, Sennheiser is also able to fit in a few extra features like touch-sensitive ear cups and swivel power-off switches. Removing the bells and whistles, and a 3-year difference in release date, the MPOW H21 is already able to hold it’s own against a much pricier PXC-550, only lagging a little bit in terms of imaging and clarity. 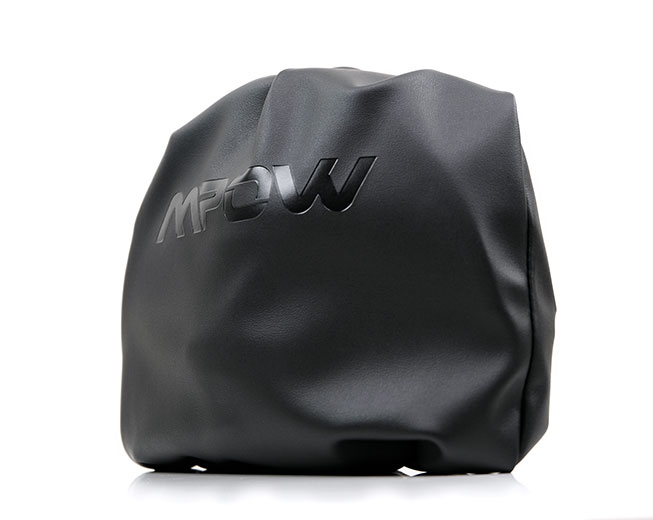 MPOW is a company that is not new to critically acclaimed products, and the H21 might just be another one in that long line of great products.

At the lower-cost segment of the market, MPOW had to make some sacrifices. MPOW might have had to sacrifice a few things like the packaging, no fast charging option, and an older USB port, but the headphone itself was not compromised at all.

The sound quality was coherent, and the internal Bluetooth DAC matches the headphone drivers quite well. The plastics in the headphones together with the earpads are also of good enough quality that would leave me at ease to use them for years to come.

The H21 may be a simple headphone, that came in a simple package, with simple features, but each aspect of the headphone been properly engineered to create a synergistic headphone experience.