Shiny…what message does this convey? Maybe some gaudiness, so it’s probably hopelessly bassy like other fashion headphones. Not quite. While the MTPG is bassy, it is tasteful, voluptuous bass. How so? Read on! 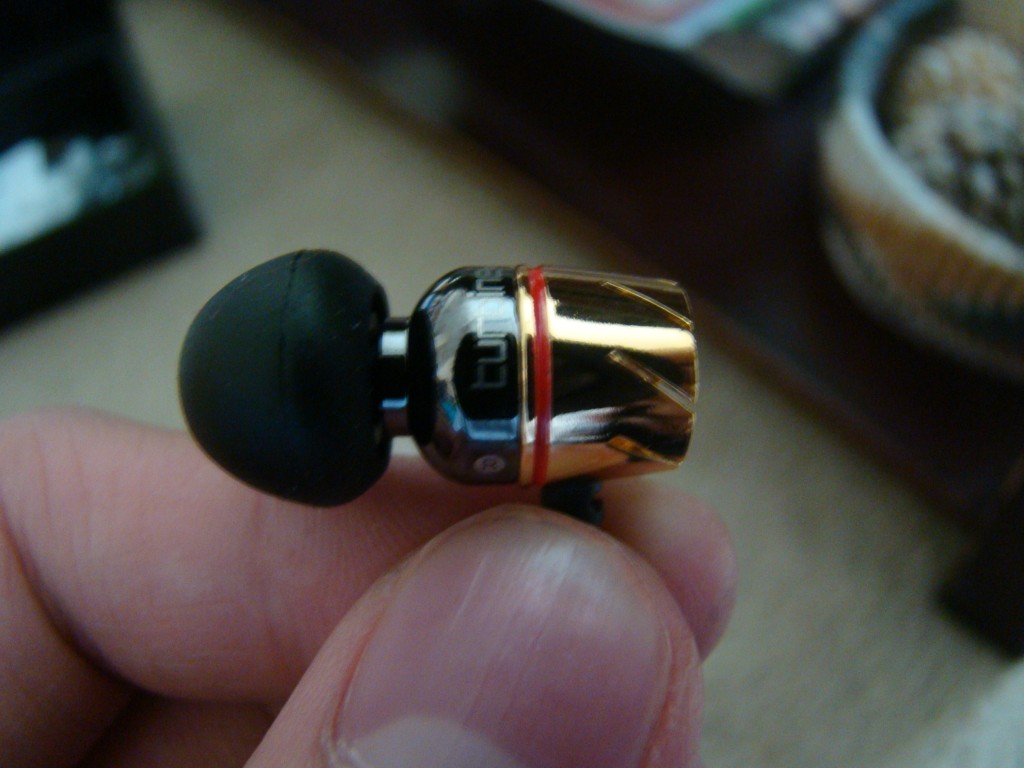 The Monster Turbine Pro Gold is Monster’s second-from-the-top tier IEM. Actually, it’s somewhat of a disservice to the Golds if I call them that.

They are about on the same level in enjoyment as the Coppers and the Miles Davis Tributes. The two are more side steps than anything. The Gold’s focus, however, is a fun sound, and a fun sound it gives.

I’d like to thank Monster for sending me this pair of Golds to review, this has, in no way, influenced my opinion of them, yadda, yadda, legal stuff. If I was a shill, I wouldn’t be reviewing stuff from different companies.

I write things as I hear them, and if I genuinely hate a product, I would politely say I don’t feel comfortable creating a review that totally decimates the reputation of a product and its company, which thankfully hasn’t happened yet. Nor do I expect it at the rapid rate the headphone industry is growing and improving. 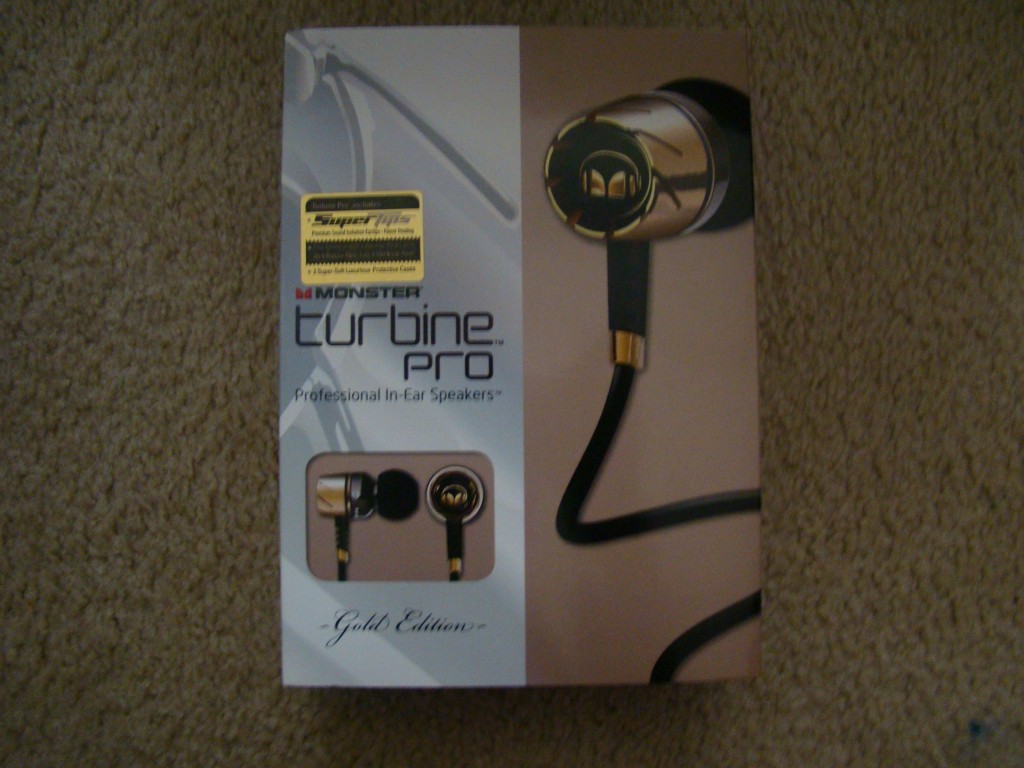 I’m going to copy/paste this from my Copper review since it’s exactly the same. In case some people skipped the top part, here it is. Beautiful packaging, and the famed quote, “Life is too short to listen to bad headphones.” is all too true. Once the box is opened–it comes with a very nice smell–, you see the Coppers in all their glory with a very nice magnetic flap case.

Under the magnetic case is another magnetic pouch case. I probably could have done without the “For Audiophiles and Audio Professionals Only” phrase on the other case. Sounds too condescending and snobby to a normal user like me.

Under the velvet-lined top portion, you find everything else you need. You find the awesome Supertips, a new innovation by Monster; it comes in foam-silicone hybrid and gel-filled silicone.

You also have some normal silicone tips and some triple-flange tips. There’s an unnecessary, in my opinion, cleaning cloth too. I don’t see the purpose because the Golds are minuscule, but why not right?

There’s also a nice shirt clip, a necessity, and a really snazzy 6.3mm adapter for those who want to use them in their receivers or headphone amp. There’s also a really cool tip holder. And there are manuals. Obviously

The earpieces are pretty weighty in your hand, but when worn, you barely notice them on. I honestly expected them to fall off, surprisingly, they hold up well. The cable joiner has a pretty cool rubber section that I know has a use, but I haven’t really found it out yet. I was told I had to say something about the “cable management system”.

This is actually just a pair of Velcro strips. They could be convenient if you weren’t absentminded like me, but I personally don’t find much use to them except as something to lose. The housings are a two-piece metal affair—likely able to resist a good bit of torture unless the glue comes undone, which I assume has been fixed if I am correct.

I have an early pair of copper, and the glue on them is already worn out. They are plated with gold paint, not genuine gold, which is a shame. Less blingy. In my opinion, it looks tacky, but I’ve always been one for the understated look.

The cable is pretty beefy, flexible, and tangle resistant, but it’s somewhat microphonic and has a bit of memory. The strain reliefs going into the earpiece are really well made, but the strain relief to the plug could be a bit better, nothing to complain about though. The “turbine” slits on the earpiece seem to be overkill, but they look nice and don’t seem like they’ll break off.

Since I have the Coppers, I’m aware of how the Supertips sound, and ironically enough, my favorite pair of tips on the Golds is the Sony hybrid tips. It gives the best balance of sound, while still providing deliciously impactful bass.

The Supertips reduced the bass exponentially and caused some shrillness in the highs. My initial take on the sound is that it shows no favor to those who are seeking the most accurate sound possible. There is an obvious bass hump, which warms the mids up, making them superbly free-flowing, and the treble has a bit of a peak.

In this review, my source is a NaNite N2, which is a warm-sounding, class-A amped player. The songs are 320kbps like they should be!

I’ll start with the bass since anyone actually interested in the Golds is likely a bass lover. Well, the bass in the Golds is probably the best I’ve heard in an IEM, which admittedly isn’t saying much since I’m one for neutral/treble-happy IEMs.

Regardless, the impact these have reaches levels of ridiculousness considering how relatively balanced the mids and treble is. They hit 20hz with ease and would probably go even deeper if I tried. Rumbling passages are hilariously fun to listen to, since the Golds rumble like no other if called upon to. But like all good things, it is not gumdrops and butterflies.

This bass comes at a cost. The overall sound comes across as a bit slow because of the fatness of the bass. However, even though the bass is silly huge, it still remains controlled and takes a step back if needed.

It never encroaches on the mids, just warms them up. Vocals and instruments are velvety smooth, feeling like a cloud. Guitars do lack a bit of crunch though because of the smoothness of the mids.

In general, though, the midrange is the most critical aspect of the sound spectrum to get in my opinion. While the way the Golds present mids is not my ideal method—forward and clear—it still manages to creep its way into one of my favorite mids because of the ridiculously serene presentation of them.

It’s warm and enveloping but still manages to be detailed and real. True, I don’t feel like I’m “there,” but there are times I’d rather be “here, in my room, with my eyes closed and getting lost” than “there.”

Treble is also deliciously smooth—a bit less smooth than my Coppers, but still smooth as chocolate.

Cymbals aren’t exactly the Golds’ forte, since the decay is a bit too quick and are too warmed up, but really nothing to complain about. Most wouldn’t know the difference.

Flutes and high-pitched brass and pseudo woodwinds are also warmed up. Imagine a stereotypical “tube” (even though that stereotype has more or less been debunked in recent years) sound. The Golds have that sound. It’s pleasant, warm, and smooth. Yet the Golds are still very clear and detailed.

They are pretty close to the Brainwavz B2 in detail, which, considering the B2 is basically the opposite of this in sound signature, is impressive because the Golds don’t have the extra treble to simulate more detail.

The soundstage of the Golds is pretty decent. There is good depth and width, but still relatively small—about a foot and a half deep, 2 feet wide. The PRaT is relatively good, but the “slowness” of the heavy bass in the Golds has created a stimulation of smooth and relaxed rather than keeping up perfectly with the music.

I’ll start with this since it’s one of my favorite genres to use the Golds in. Tool’s 10,000 Days for this segment. The electric bass is wonderfully growly, and notes are easily separated, never smeared. Vocals are growly but keep control.

Drums are well-spaced and impactful, while cymbals are a bit muffled. Thunder crashes in Wings are…shocking, and rain is surprisingly accurate, and I say this as it is raining as I write this review, and I hear almost no actual difference between the two.

Electronic is downright amazing on the Golds. I used Hallucinogens In Dub for this test. This is just…wow. If I go to a club, this is what the music should sound like.

The bass is huge, enveloping, and impossibly deep, while still being quick enough to keep up. The Golds just might have reconverted me into an electronic addict. While there is so much more I can say, do I really need to? It’s like the Golds were made for electronic.

Like I’ve said before, I’m not the biggest fan of this type of music, so I’m not the most reliable source for this genre, but for the sake of completion, I’ll include it with Atmosphere’s When Life Gives You Lemons, You Paint that S#!+ Yellow.

With this in mind, I expect clean bass control, along with clear vocals and pianos from this album. Vocals are clear, as hoped for. Lyrics are easily comprehensible and delve straight into you. Bass is tight for the most part but can get a bit overwhelming at times. Pianos are great.

Finsterforst’s Weltenkraft for this album. I have used this on many reviews, but I find the fact that this band has an accordion as the main instrument absolutely fascinating, and a good basis on which to test the smearing of instruments, because, well, most headphones get this wrong, but my DT48 has gotten it right, so I know it isn’t a recording fault.

Therefore, for any headphones to really pass this test, they need to get the accordion right. And right the Golds do. While yes, the accordion gets lost on occasion, those situations are few and far between. All other aspects of the album are very good. Vocals are actually comprehensible, guitars are wonderfully crunchy, and drums have an amazing impact.

As I have with every review lately, I will be using The Age of Rockets’ Hannah. The Golds’ smooth nature presents this album’s natural sublimity beautifully. Vocals seem to float in the air, strings sound pleasantly warmed up, guitars sound real, and drums are impactful.

I will be using Regina Spektor’s Begin to Hope. Regina’s voice is wonderfully smooth thanks to the Golds while remaining with great timbre. The instruments sound sublime and are a wonderful experience all around.

Dave Brubeck’s Take Five for this genre. The saxophone sounds wonderfully smooth, drums are impactful, while well-defined and distinguishable. You can almost feel the snares. The bass is full of body, and the plucking of the strings is easily heard.

So, you’ve read about 1750 words about the Golds, but what does it all mean? Well, for starters, the Turbine Pro Golds are a wonderfully smooth pair of IEMs, with bass that can almost challenge a good subwoofer, while leaving the rest of the sound mostly untouched.

It definitely deserves the status of a top-tier IEM. However, this IEM is definitely not for you if you like oodles of detail or any true accuracy, because the Golds are for pure fun, and don’t try to act like they aren’t, unlike the Coppers admittedly do. For the $180ish new they go for, it’s an absolute steal if their sound signature is what you’re looking for.

Sure, most IEMs under $100 have this sound signature, but there are tradeoffs. With the Golds, there are much fewer tradeoffs in the sound. Just don’t expect them to be perfect, and you’ll be having years of sonic nirvana.