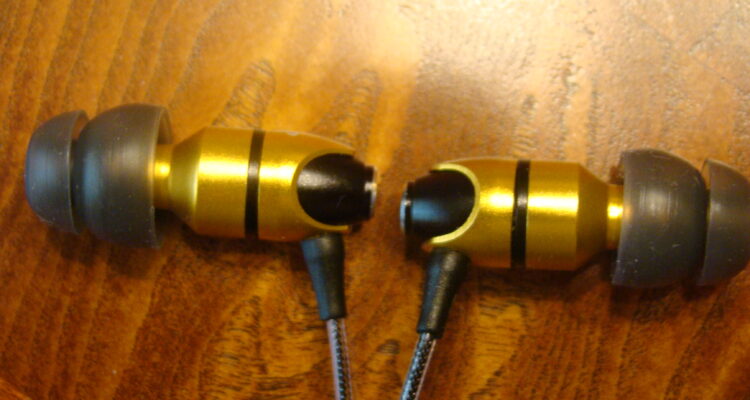 The MEE Audio M31 is an entry-level 9.0 mm dynamic driver universal IEM with a choice of up to 5 colors. It is priced at $45 at the time of launch for the non-mic version and $55 for the mic-ed version.

Disclaimer: The MEE Audio M31 sent to us is a sample in exchange for our honest opinion. We thank Mee Audio for this opportunity.

To learn more about IEM reviews on Headfonics you can click here.

Slide here to add your score on the gear!21 Votes
7.2
7.2
Score
$45
Mee Audio
Big, beefy, burly, bounteously bassy…bass. That’s what the MEE Audio M31 does best, but is it all fun and bass until the cows come home? Read on to find out!

The housing of the M31 is very sturdy feeling two-toned metal, although they’re pretty monstrous, even in comparison to Turbine housings, as shown.

They do stick out of my ears more than I’d like, but it’s a trivial negative point. The cable is a standard MEE cable, but very attractive for the $45 you’ll pay. They do retain some memory though, but it’s hardly something to cry about.

The plug, unlike previous MEE models, is right-angled, instead of the hockey stick 45° type, and feels like it would take a fair amount of abuse.

Knowing that these would be a fun sounding IEM, I first used the M31 with…wait for it—a Lady Gaga album (Fame Monster) for the heck of it, and it’s hard to contest that it isn’t a fun album.

I must say, it’s nigh on impossible not to tap my foot to the album, as much as I might not particularly like Gaga, the M31 sure make music involving. They don’t have the best mids, best treble, or even tight bass, but they don’t try to sound perfect.

Instead, they focus on, as Rebecca Black has said, “FUNFUNFUNFUN.” First impressions are pretty positive. The average consumer would love these.

To review the M31, I’m using a NaNite N2, a DAP with a class A amp section, so while it isn’t as optimal as an actual external amp, it’ll do well enough.

The N2 is already a warm player, so keep that in mind.  Tracks are 320kbps. Tips used are MEE Audio’s “Balanced” double flanges.

To me, they provide the most bass (which is the M31’s main thing) while not overly masking mids and treble in the stock package. I’ll include a tip comparison at the end.

Bass is the hallmark of the M31. It is probably the bassiest IEM I’ve ever heard, and people that know me would assume I hate that, considering my favorite headphones have “No Bass™,” but the M31 manages to be super-bassy without murdering the mids in the process, for the most part.

I can hear a bit of bass bleed, but it’s rather negligible. It is boomy and uncontrolled, even bordering on tasteless and undetailed, but something about it draws me to it for anything pop or electronic.

The CC51 murders the M31 in bass detail, even the lower M21 is more detailed and controlled, but the M31 bass is just fun. I expect a Head-Fi mod burning my lawn, but I don’t care—the bass is fun, and I like it.

Despite my gushing about the bass, it is mostly midbass. They struggle at 35hz and lower. Then again, this is a $45 IEM, with a 9mm driver at that, so I’ll let that slide.

However, the mids are where the M31’s struggle a bit. The frequency graph of any sound device is akin to a body of water. If there is a rise/wave in the water, some parts of the body have to lower.

The same principle applies here. The bass of the M31 is very accentuated, so the mids and treble suffer. The mids are warmed up by the bass, and that’s extremely apparent in any track.

Instruments are warmed up way too much to be called accurate, and the tone of voices is totally off. However, the mids aren’t as recessed on the M31 as they are on the M9’s.

The treble of the M31 is smooth, but with the wrong tips, can change drastically and be painfully sibilant, to the point where snakes and dolphins can get headaches. With the balanced tips, however, it’s smooth, but nothing special at all—even veiled. Still, it’s one of the tradeoffs for their boomy, bodacious bass.

The soundstage of these is peculiar. The stage is very wide (for an IEM) but not very deep at all. About a foot of depth max, while the width is about 2-3 feet across. I somewhat expected this with the huge port, but surprisingly, it doesn’t leak any sound that I could tell.

The detail is pretty average at best. There’s nothing particularly wrong with that, especially considering it’s a bass monster and it’s a miracle there’s any detail, but I’d like a little more. The veiled treble is probably at fault for that. Timbre and tone, as mentioned before, are a bit below average because of the bass bleed.

Rather than state how specific genres sound with the M31 (spoiler alert—electronic, rap/hip-hop, pop and indie sound good, while metal and anything involving many instruments or vocals tends to sound smeared and unimpressive.) it’d probably be more beneficial to have another tip comparison.

It’s no secret that I like the M31. I probably like them a bit too much. They’re inaccurate, bloated, and headache-inducing, but that’s exactly why I like them. I don’t analyze my music when using them. I just rock out to the music.

Sure, they don’t do well with complex music, but these love synth and bass centered tracks, and if you’re in the market for a bassy IEM under $50, the M31 should be on the top of your list!

In a perfect world, these would be sold at any given electronics store, taking any and all business away from Beats if people could actually try them.