The HUM Dolores is the Hong Kong company’s lastest flagship dual BA driver monitor and sits above the Pristine. It is priced at $1699 for the universal.

Disclaimer: The HUM Dolores sent to us is a sample in exchange for our honest opinion. We thank the team at HUM for giving us this opportunity.

This is our first official HUM review but you can read more on BA monitors we reviewed on Headfonics click here.

HUM is a Hong Kong-based IEM manufacturer and they are not exactly prolific in their product releases though they are very respected for what they do put out in the market. I actually own a universal version of their Pristine for a few years now and I find it an incredibly impressive monitor.

That’s the thing with HUM though, they are not a driver count specialist. The Pristine is just 2 balanced armatures but it sounds way better than a lot of other dual BA out there. Instead, HUM put a lot of effort into what is around those drivers internally and how they are driven.

The Dolores is their new flagship monitor and it works on exactly the same principle as the Pristine. It is not cheap though at $1699 for the universal version and $1799 for the CIEM. I went with the universal option for this review as I wanted to do a direct comparison with my Pristine and see where the improvements are.

Just as a side note, the Dolores is not posted on their website which is slightly disappointing. Thus, we refer you to their FB page in the links and the nearest local dealer, in this case, Zeppelin & Co in Singapore.

Travis, the founder of HUM, and I had a bit of a discussion about this because on the surface a two unit 3 balanced armature driver monitor at this price point would raise some questions.

In some ways, HUM has been tapping into the ‘what’s happening around the drivers” rather than pure driver counts longer than the more well-known proponents of this approach such as 64 Audio and Campfire Audio.

The secret of the ‘HUM sauce’ lies in its crossover design and an inductor for the low-pass filter. According to HUM this, combined with a 1.8k crossover point creates a cleaner and more accurate presentation that is often more difficult to achieve with multi-channel drivers. As quoted by Travis:

Not that multi-channel driver designs cannot achieve this but rather the difficulty in a multi-crossover design in such a small physical build as a monitor presents phase shift challenges. These challenges can often lead to complex driver builds over narrow bandwidths interfering with each other. The resulting outcome can often lead to a blurring of imaging and detail which runs contrary to the accepted thinking that more drivers equals more detail. 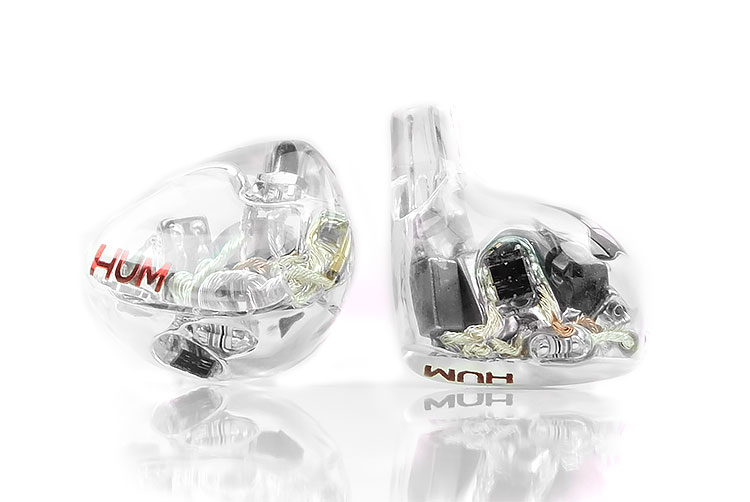 You can buy the Dolores in both universal and custom format with the custom format starting at $100 higher than the universal. The universal comes in a ‘smooth to the touch’ transparent MMCX terminated acrylic shell and bears a close resemblance to their previous Pristine flagship universal variant.

The form factor is not so much curvy as in ‘custom universal’ like an iBasso or InEar Stage Diver design but the nozzle is relatively long allowing the tips to pick up the slack for any seal issues.

That being said, the Dolores is a shade larger and heavier than the Pristine due to, I presume, the inductor and crossover design. I can guess as much because the benefit of such a clean transparent design is you get to peer right into the Dolores internal design which should pique any nerd’s interests.

The first thing you are likely to notice is the wiring. The Dolores uses a mix of copper and silver 26AWG internal wire whereas the Pristine was mostly copper. That should give the final tuning a bit more clarity and top-end reach over the Pristine’s thicker darker sound though it is not the sole factor in any monitors final sound tweaking.

The second is the use of a really big black inductor to the rear of the shell compared to a thinner but longer capacitor in the Pristine. Both BA drivers are also positioned right over the nozzle with a direct fire into two short tubes and out of a dual bore tip. HUM does not use any horn principle design with the Pristine nozzle. 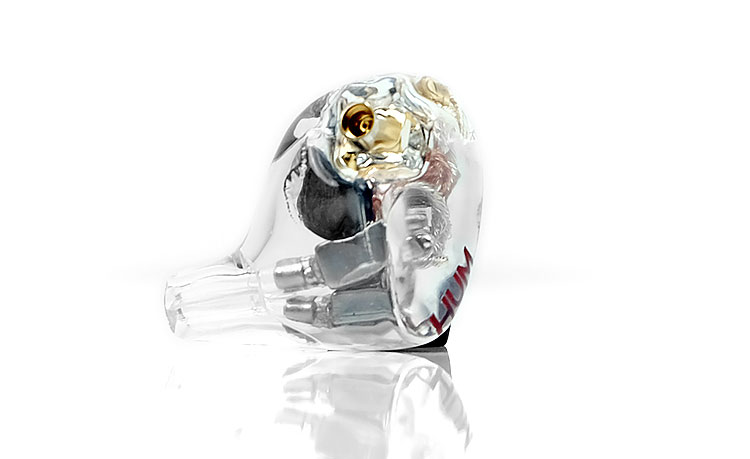 Despite the lack of deep contouring in the Dolores, I find it fairly comfortable and to seal quite well. I suspect the custom version will provide an even better experience with the universal really coming down to the tip suitability.

Due to its enhanced physical depth, it will sit out of the ear just a little more than the Pristine did though the benefit to that is the lack of pressure on your outer ear crus of Helix ridges.

The only issue I found with the universal version is that it might just be ‘too smooth’ for my ears and it requires little strain for them to slide out. Again, a tip choice may affect this however that’s my experience with the supplied stock tip.

HUM advises keeping a 5mm distance between the nozzle of the Dolores shell and top of any tip to maximize performance (close to the custom version). Now, for the tips, you will notice that the Dolores does not have a ‘tip lip’ on the stem to hold it into place.

I would have liked to have seen one at a 5mm distance from the tip for consistency tip fitting purposes using the supplied tips. Perhaps the lack of one is to give you a bit of flexibility with 3rd party tips to get the right fitting?

As for the tips themselves, the Dolores comes supplied with just 3 sets of a single wide bore silicone red stem tips in a small, medium and large sizing. I find them more than comfortable and they do cling to the nozzle quite tightly so there are no issues of slippage. 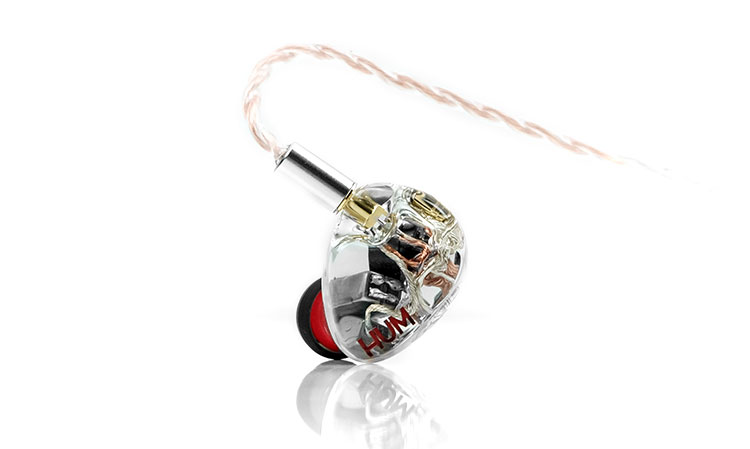 The Dolores uses a brass-plated MMCX over the ear connection system houses in the shell right at the top. Of course, the cool aspect of the design is you can see right into how the connector is wired up to the cross over and drivers.

The MMCX connector is quite flush to the shell and not raised like some other alternatives so be careful when connecting the cable as you may think it is connected but it won’t be unless you hear the MMCX “click”. A few times at the start that caught me out with the cable flapping in the wind and the driver still in my ear.

The Pristine’s reputation was built in part with a stock cable which was regarded as good quality. And so it is with the Dolores also which comes complete with their 1.2m Tara cable. The Tara is a 0.1mm x 17 strand 26 AWG 99.99% pure copper wire build using a transparent Dupont TPE jacket to let that coppery hue from the wire shine through.

I would suspect it is on the same level as the Ares II from Effect Audio though TPE is a little stiffer in handling than the new PVC jacket used by Effect Audio. The Tara is terminated with a nice grippy black aluminum long-barrel 3.5mm gold-plated jack and small lightweight chrome finished aluminum alloy y-split and connector barrels.

You will not find any memory retention with the Tara cable so it unlikely to form annoying tangles or kinks.  The Tara is also fairly lightweight also using very low-profile flexible memory hook coatings. It does have a tiny bit of ‘echo’ on the wire or microphonics when touched above the y-split but less so below the split. 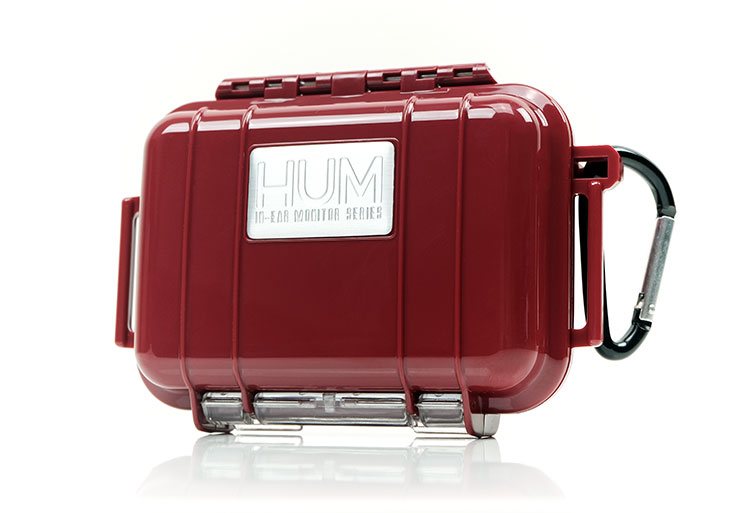 HUM keep it kind of simple with their packaging. Perhaps too simple for a product costing this much. I would love to see some retail packaging to go with the strikingly attractive modified 1010 case they offer for carrying your Dolores around.

The Pelican 1010 is dust and element proof and has some soft and very protective rubber finishing on the inside so it is pretty good for day to day use, throwing it in the bag or just throwing it if you are that way inclined. For attachment purposes, you also get a detachable carabiner lock.

Inside you get your pair of Dolores, the Tara cable, 3 sets of silicone tips and a cleaning brush. And, ‘that’s all she wrote folks’.