The Hifiman RE2000 is the company’s flagship single dynamic driver universal monitor featuring its unique Topology technology. It is priced at $2000.

Disclaimer: The Hifiman RE2000 is a sample in exchange for our honest opinion. We thank the team at Hifiman for giving us this opportunity.

HIFIMAN RE2000
Other dynamic driver IEMs might hit a little harder, sound a bit deeper perhaps but the RE2000 can rightly claim to be one of the smoothest and most coherent dynamic driver signatures out there.
Slide here to add your score on the gear!37 Votes
8.5
8.5
Reader's Score
$2000
Hifiman

The RE2000 is Hifiman’s latest flagship IEM and by all accounts calling it a single dynamic driver IEM would be an oversimplification in the extreme. Truth be told, dynamic drive technology, despite the long history, has been bypassed in favor of multiple BA designs for the last few years.

Driver counts wow audiences. Much like the AMD/Intel race of the 90s’s it is a marketing dream and not terribly difficult to justify on paper. There are some stellar designs out there that do both the marketing message and price point some serious justice.

Recently though dynamic driver technology has had a bit of an upswing and there is an avid audience out there that crave those natural deep hitting tones and impressive staging of a good dynamic driver design.

Campfire Audio cracked it with their physical sounding Vega. The IE800 is still hugely popular. Asian companies like Rhapsodio are quietly crafting successful pure dynamic driver designs such as the Galaxy V2. However, the RE2000, priced at $2000, is pushing a very different approach to driver design and performance.

What Is The Vision?

Normally I kick off with a focus on a product pitch, but this didn’t seem right with the RE2000. There is a lot more going on under the hood of the RE2000 just to call it a pitch. Three years of work to be precise is inside that shell and represents more of a vision than just a simple product rollout. Fang was keen to share how the whole concept of the RE2000 took off with a recent chat we had: 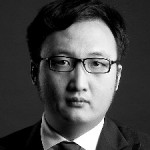 Hifiman worked on their little dynamic driver system for more than 12 years. Previously, Hifiman made their IEM products under the $300 price range. However, a lot of customers told us that our inexpensive IEMs always sounded better than the more expensive products.

This gave me an idea: what if we make a best sounding in-ear without considering cost? We spent about 3 years research on driver/casing/sound. From that, we achieved RE2000.

The RE2000 dynamic diaphragm is being touted as being a unique design and a huge improvement on traditional dynamic drivers. Particularly, in the way it controls distortion and how much additional tweaking Hifiman can exact on the sound signature before it goes to market.  In part, this process pulls from Fang’s experience working on his recent planar design materials as well as his core academic research into nanotechnology.

Hifiman has created what they call a ‘Topology’ diaphragm for the RE2000. This is a single 9.2mm dynamic driver with a nanoparticle coating applied to its surface. Fang’s reasoning for this nanotechnology is that by using distinct geometric patterns in the nanocoating he can control the final sound signature with far more finesse than he can with traditional dynamic drivers.

He also turned down a BA design because he felt that the sound produced is too lifeless and prone to heavier distortion due to the way armature drivers diffract and reflect.

The coating is also being pitched as an excellent tool through which to eradicate or at least substantially reduce typical diaphragm distortions which could again alter the signature necessarily and hinder its operational performance. 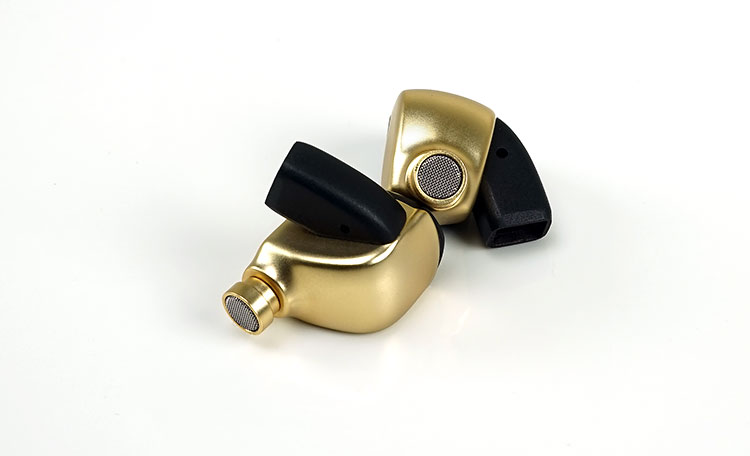 Hifiman has a tendency to come out with unique build designs in both their headphones and IEMs and the RE2000 is very much in line with that approach. This is an unusual and striking IEM design, one that stands out from the crowd.

The RE2000 is an angular detachable IEM design, perhaps on the large end of typical single DD IEM body sizes. It sports a fairly short nozzle, a gold-plated body that is oval in shape as you look down on it and finished with a hardened matte plastic front plate. There is a very long angular stem at the top of the detachable cables using the same plastics as the front plate. The shaping means the RE2000 is primarily designed to be worn over the ear. If you look carefully you will also spot the venting port for the driver at the base of the stem. 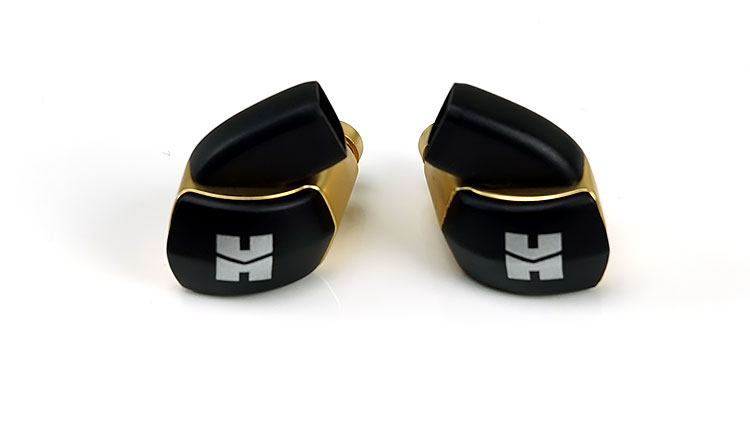 The material composition of the RE2000 also strays a little from the norm with a mixture of brass, 24k gold electroplating as well as the black plastic finish.

I am reliably informed by Hifiman that brass was seen as the ideal body material due to its more malleable production properties and generally better acoustical chamber response than either copper or bronze. Both of the latter materials were dismissed due to the difficulty working with the latter materials that are either too hard or too soft for molding.

The 24K gold plating does add a really striking visual to the brass finish and also helps prevent inevitable oxidization stains that come part and parcel with brass plating. Anyone who owns the Kojo KM-01 brass amp will understand that point all too well.

The RE2000 is the first wholly in-house IEM from Hifiman that sports a detachable cable design. Hifiman has sold detachable units before though. The older RE1000 custom design was actually a partnership project with Unique Melody using UM shell designs and a 2-pin 0.78mm connection back in 2015.

Hifiman has decided to continue with the 0.78mm fit though it is fairly recessed into the long stem meaning not all aftermarket cables will provide the optimal fit. I say this in reference to those cables with elongated memory hooks that may not sit easily on the ear given the fairly pronounced stem arch of the RE2000.

Included in the accessory kit are two little connection adapters that are provided to help those who wish to adapt to create new cables and want them to fit seamlessly into the deep sockets of the RE2000.

The cable itself pulls from some of the work put into the HE1000 wiring. So like their high-end headphones, the cable is constructed from crystalline copper though the specs stated that it has a silver coating or SPC as opposed to a full blend of crystalline copper and silver. The wiring itself is coated with a rubber or PVC jacket so it is actually fairly thick with what looks like a butyl rubber strain relief system at either end. 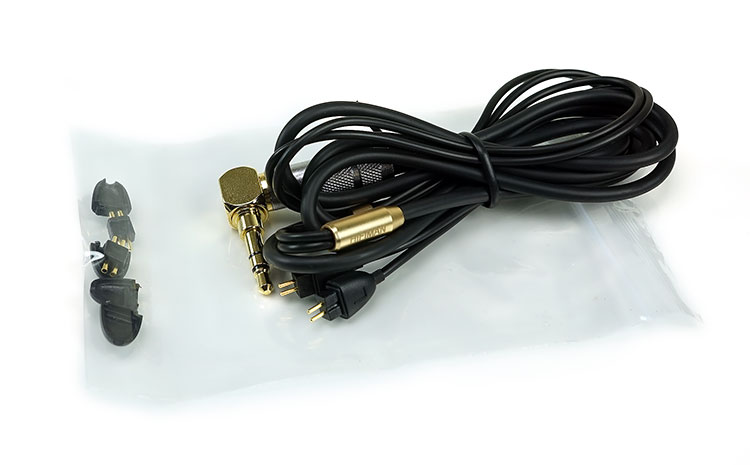 The y-split tube and adjustable chin strap are coated also in 24k gold to compliment the driver housing.  Beyond the y-split, the cables thin out a touch and feel a little less durable. The connector strain relief is also a little thin and short for my liking so I would take a little bit more care.

The cable is completely memory free so they will not tangle one iota and sits really nicely around and over the ear. The cable does not use memory wire but you really do not need it as its own weight keeps the cable in check. The microphonics performance of the cable is excellent both below the y-split and above.

The cable is terminated in a very sturdy right-angled 3.5mm gold plated stereo jack. I have started seeing a lot of Asian companies turn to this type of jack and I have to say its one of the nicer jacks I have worked with. Certainly, they are a lot tougher than a lot of slimline straight jacks with less direct pull on the strain relief when taking the jack out.

Surprisingly no quarter jack adapter is included in the package, something I thought would be ideal with the RE2000. Nor is there any balanced cable alternative in the package though you can attach one with a similar 0.78mm 2-pin connection. Two omissions that I think would have added substantially to the RE2000 performance and connectivity.

To be honest, given the size and form factor I didn’t think the RE2000 would be a great fit but I was wrong. Do note that the RE2000 has a very short nozzle so a lot of the seal and comfort levels will be driven by the tip you choose. Hifiman does include a set of plastic slip-on hooks that do keep things fairly locked in place but I find them a little less comfortable than the cable alone.

However, the design does neatly “jump” over the antihelix ridge. It also uses the antitragus and Helix cartilage protrusions of your ear to stay nicely in position without adding too much pressure. They do sit a little outside of your ear so they are not flush but given their 13.8g weight I found the whole experience to be fairly comfortable.

The RE2000 comes with a fair range of tips but not market-leading. Included are 2 sets of T-400 Comply Foam tips in large and medium as well as a fairly flat set of dual flange tips in small, medium, and large.

What I did latch onto was a set of triple flange tips which were my personal favorite in terms of comfort, penetration, and seal. The foams will do a better job of sealing but I found the flanges to be a little lighter and comfier.

What could be improved? Personally, I would have liked to have seen a range of single bore silicone tips, maybe hybrids or SpinFit types in there inside of the flatter dual flange tips. 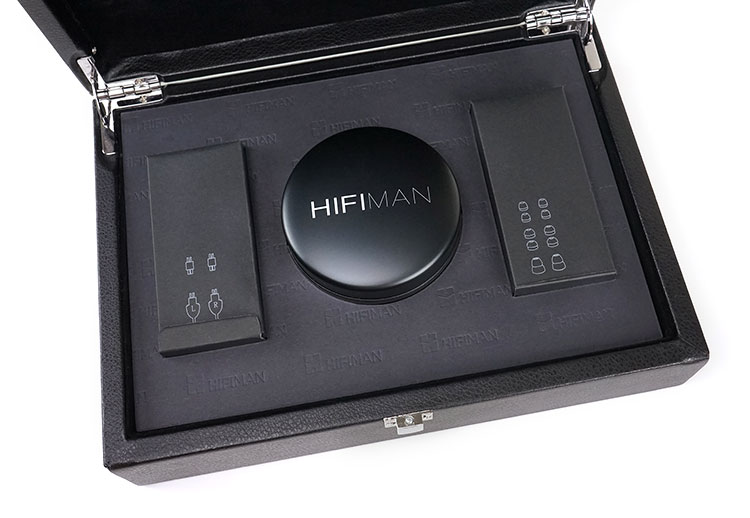 The packaging is big and impressive though you could argue slightly OTT but hey its the flagship and why not throw some money into creating a premium perception. This is a large presentation style case finished with black faux leather.

The hinged box has a similar style of silver metal plating in the middle branded with the Hifiman moniker and the RE2000 lettering. The lid is secured with a metal fastener not similar to the headphone cases Hifiman uses for the HE1000 V2. 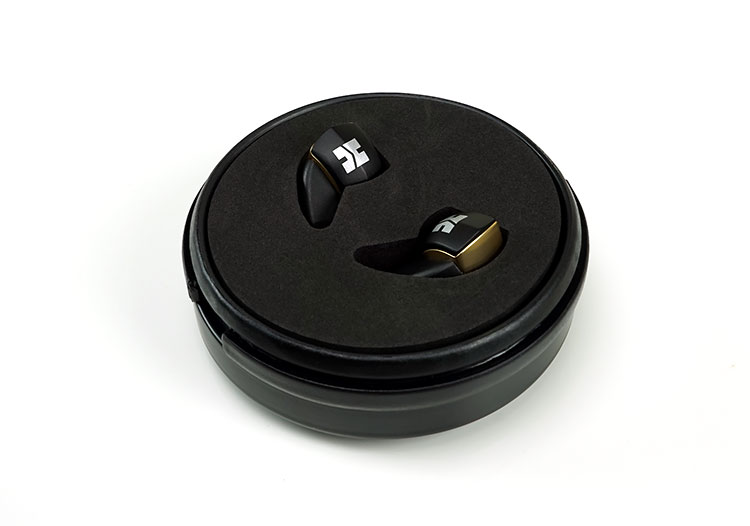 Inside you have a foam layer 3 cut-outs at the top to house the cable/connectors and silicone tips with a small portable hard case in the middle. Inside the hard case, you will find your set of RE2000’s nestled in a small mini cutaway which you can elect to take out or leave in depending on your preference. 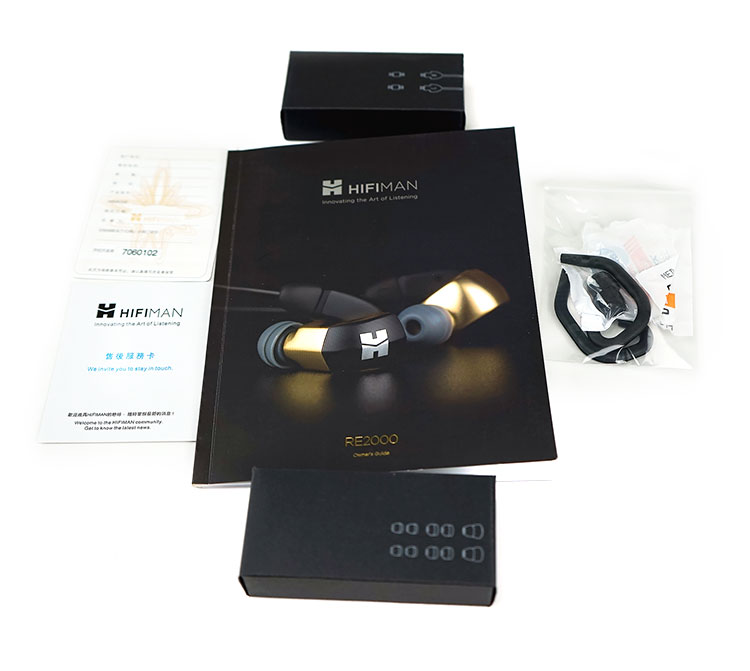 Underneath the foam layer, you will find a small but rather interesting color brochure/manual which I actually took the time to read from end to end. You will find plenty of history regarding the RE2000 development as well as the technical data, warranty support, and the purpose of the H connectors.

Apart from the manual you also receive a set of contact and warranty cards, the two bags of Comply foam tips, and the set of aforementioned ear hooks.