The ARC Pollux is a new Thai custom monitor based on a single balanced armature design and priced at $399SGD or just under $300 US.

Disclaimer: The Arc Pollux sent to us for the purposes of this review is a demo unit sample and does not have to be returned. Thank you to Arc for giving us this opportunity.

If you hunt around Facebook (as you do) you will come across one to two of the largest membership-based audiophile groups you will ever encounter with up to 60k members and growing.

Both of them are based in Thailand and are very active indeed. Thus, it is no surprise then that we are starting to see some homegrown audiophile gear emanate from the likes of Thailand. After all, we have quite an industrious micro-industry already from Vietnam in the shape of Aya Audio and Soranik with a really nice set of IEMs in 2016 and 2017.

Step forward ARC CIEMS from Bangkok and their very first offering, the ARC Pollux. This is actually a custom monitor, though for the review are going to putting the demo universal version through its paces. The differences, I am told, are minute between the two versions due to the acoustic performance of the supplied SpinFit tips.

The price is great for a custom monitor. At SG$399 or just under $300 US, the Pollux will appeal to those who are also attracted to the Avara customs range from Indonesia

ARC has a very specific “space” theme that runs right throughout their vision and that includes the Pollux. This is their first custom monitor but I believe they have another one in the works called the Mira, of which I have no information about at present.

ARC itself is short for Arcturus, which is a bright red star constellation of Boötes. The name Pollux is a very well-known yellow-orange giant star located in the Gemini constellation.  It has been referred to countless times by noted laureates such as Percy Shelley classic Homer’s Hymn To Castor And Pollux since the names are also drawn from classical texts on the Roman and Greek Gods.

ARC has built on that core theme and the Pollux launch concept by integrating a number of specific visual designs and buzzwords. Terms such as “contact light” and the clever use of “baggage tags” on the sides of their carry cases all pop-up. Of course, there is a heavy use of black coloring to designate space itself in their branding

I am not quite sure how much relevance this space stuff has to the average buying audiophile. However, astrological theming seems popular with a number of companies, not least Campfire Audio but they tend to view space from the ground looking up rather than actually being in it.

The ARC Pollux uses a single Knowles ED-26805 balanced armature monitor. The ED-26805 is a vented mid-range BA driver that was specifically picked by ARC because it has a specific phase delay characteristic built right in that matched the sound signature the company wanted to achieve for the Pollux.

To some extent, the Pollux follows a similar technical specification as that laid out by Knowles for the driver. The FR is not that far off either, however, ARC has done some fine-tuning specifically on the lower treble response.

Apart from that, the impedance for the Pollux is matching at 28Ω and I dare say the sensitivity level also at 109dB (113dB at a 1mW weighting) though that is not listed in the Pollux spec sheet. 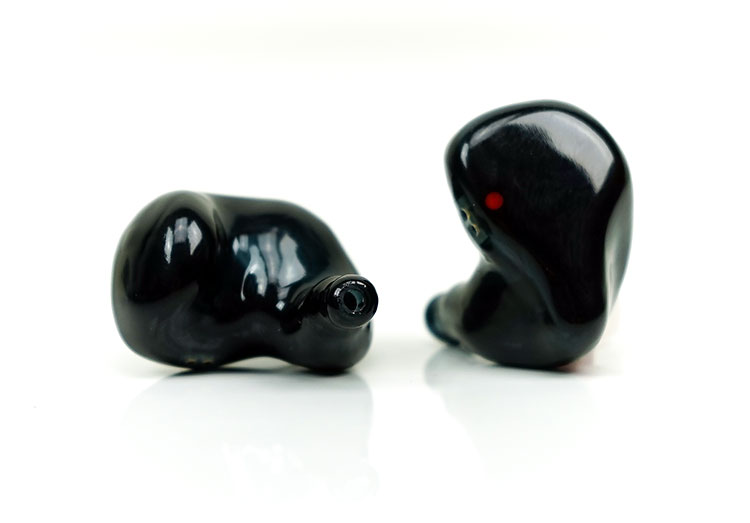 Of course, the Pollux to you will be a custom monitor so it will start from a set of clay impressions sent to them and designed with your specific preferences. I presume these are 3D printed designs and from what I can see on their Facebook page you get a few color options, black, red and clear in shell and plate variations. It also looks like you will be able to personalize them with artwork.

The demo universal unit I have here is a hollow-shell acrylic body in black with a matching black faceplate. I presume the materials are pretty much on par with those used on the custom monitors themselves. As such, they are professionally finished with a nice lacquer overlay and I can find no bubbles or visual oddities on the plate or body.

The only punctuation in the monolithic styling is the single red dot near the 2-pin connection ports that signify the ARC or Arcturus star in the sky. A nice touch actually but an old school IEM user like myself might have preferred a red dot on the right driver only. Old habits die hard and the presumption is a blue dot will be on the left.

The contoured design is what we now come to call “custom-universal” which you will find on a few competing units such as the single BA qdc Neptune and or the hybrid iBasso’s IT03.

Basically, the whole design is drawn from a ton of ear scans and developed into a universal shape that ideally fits the average ear. The contours and ridges are there to ensure the fit is tight and the comfort levels are maxed out.

For example, the Pollux has a little dip in the inside of the shell for your ear’s concha ridge that relieves physical pressure. Believe me, that makes a big difference in comfort levels.

The use of tips will take a little away from the true signature of the custom build, however, the nozzle reaches pretty deep. Certainly, the nozzle is much deeper than iBasso or Jomo custom universal versions.

It sort of reminds me of the SA-43 from M-Fidelity which also had a very long nozzle. These longer lengths tend to favor those who like to move around a lot and keep a secure fit. 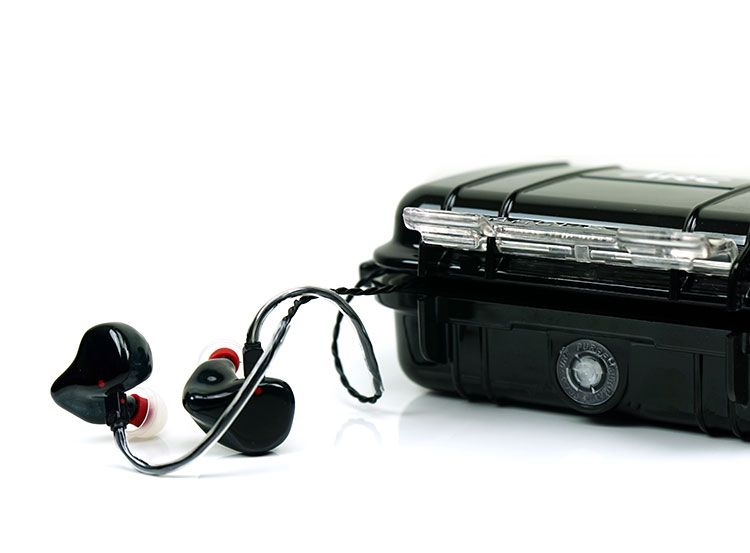 The Pollux uses a 2-pin 0.78mm set of connectors housed at the top of the acrylic body. These are flush rather than recessed sockets and are designed to be worn over and around the ear.

The supplied cable is a 1.2m OFC 4-wire OFC, possible a Plastic One or variant of that type. The stock cable uses a set of soft plastic memory hooks that have good memory retention for shaping. The cable itself is light, plaint with no tangling issues and is very microphonic free as most of these types of cables are. The cable is terminated with a right-angle 3.5mm TRS stereo jack houses in a thick rubber barrel with matching rubbery y-split.

Cable rollers may want to explore higher AWG or 8-wire variants to release the Pollux’s true potential as these lower grade stock wires can often inhibit high-frequency performance and dynamic range. They do offer a fairly soft and to the warm side of tuning though which some people quite enjoy.

For a demo universal the fit is fantastic. I am not sure why they are not selling the Pollux demo as a standalone universal, they really should. The deeper nozzle combined with the custom style body shape gets the Pollux really tight to the ear without the additional pressure. It feels more secure than the Campfire Audio Comet and on par if not slightly better than the qdc Neptune.

There is much less work for the tips to do given the deep insertion and being a BA there is no bass vent either. All this means the Pollux universal is one of the best sealing universal units at this price point. 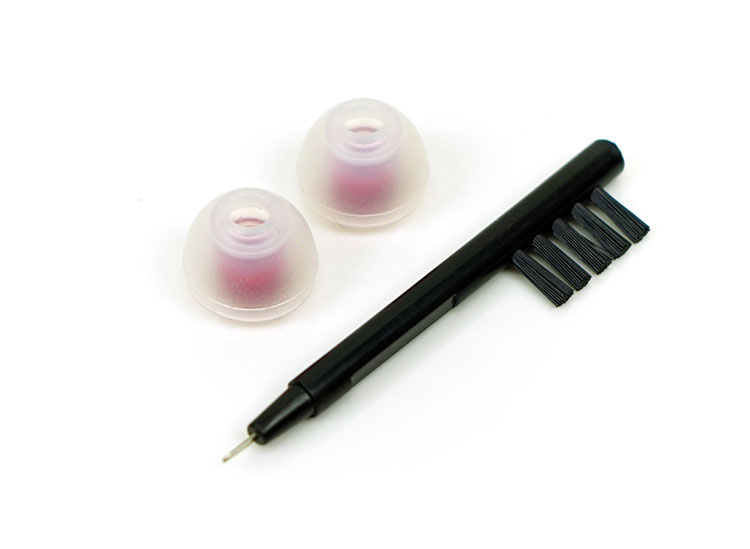 This is the interesting point of the review and one I will delve into later in the sound impressions. The demo unit was supplied with a set of medium-sized SpinFit tips. I asked Techat of ARC why these particular set of tips and his response was that it was the closest match they could get to the custom build frequency response.

Judging by the supplied data everything does seem to match both build types from around 200Hz onwards. The only difference is a slight drop in low-end output with the SpinFit universal by around 1-2dB from 200Hz down to 30Hz where both seem to once again match in output. In terms of a seal, silicone will leak a little more than a custom build so the drop is understandable. 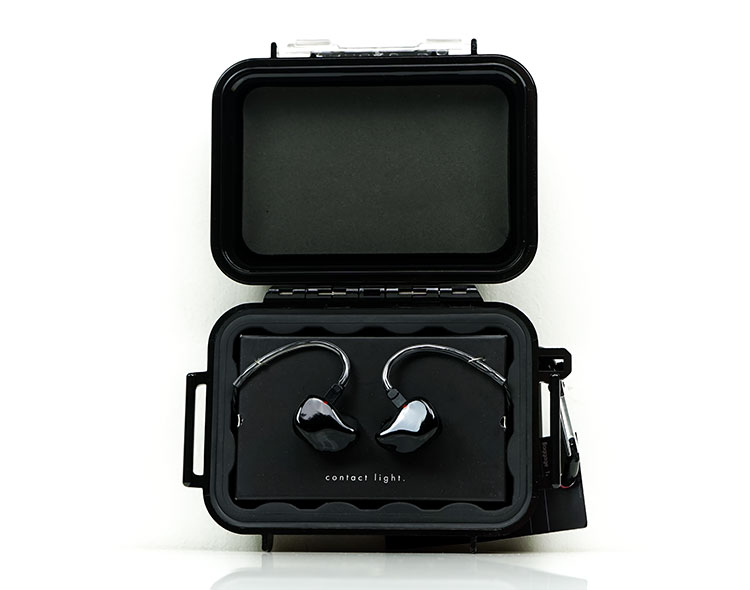 The packaging all fits in with the space theme and has some nice finishing touches. The included accessories and hard case are not unlike an older AAW or Noble Audio ensemble. You get a polished opaque black Pelican Case 1010 hard case with the ARC branding on top and a rubberized interior to prevent unwanted knocks during transportation.

You also receive an additional aluminum black and silver carabiner handle for attaching to whatever you want to attach it to as well as a small cleaning brush. Attached to the carabiner is a themed baggage tag with flight no and from. I would presume the warranty details maybe on this tag on the custom version. Since the nozzle on the demo unit is likely to be similar to the nozzle opening on the custom, i.e. no gauze then that cleaning brush will also come in handy.

Inside the Pollux unit, it set with a cardboard pullout featuring the words “contact light” (all part of the space theme) which you can gently pull out. Underneath you will find the cleaning brush and for the demo unit the tips also.