The FiiO Q5s is a revision of the original Q5 portable Bluetooth DAC/Amp using FiiO’s latest interchangeable AM3E amp module. It retails for $349.99

Disclaimer: The FiiO Q5s sent to us is a sample in exchange for our honest opinion. We thank FiiO for this opportunity.

We reviewed the original FiiO Q5 back in June of last year and were so impressed with it we gave it our Best Portable Amp/DAC award for 2018. Now we are back with a revised edition of the Q5 called the Q5s with FiiO promising some worthy updates to the original.

However, it is not just physical hardware updates but there also seems to be some more integration and features accessible via their Android app, FiiO Player. Before it was just iOS so this really continues the theme by most of the major DAP players such as HiBy of introducing feature-rich software to better connect their ecosystem of devices. Something we welcome here on Headfonics.

The good thing is that the price has not changed, it is still $349.99. Often improvements can come with price increases but this is not the case here and FiiO has to be commended for that. However, is the new feature set worth selling your old Q5 and upgrading? Read on.

Ok, so there have been quite a number of changes over the older Q5. The first is the upgrade in the dual DAC system with a move to the newer AK4493EQ over the older AK4490EQ. That should mean a slightly smoother upper mids and treble performance over the older harder sounding chipset from the Q5 as well as lower distortion and better SNR numbers.

Jitter and decoding potential via USB have also been given an upgrade from the XMOS XU208 to the XMOS XUF208 USB decoding chipset. The Q5s can now handle up to 768kHz/32 BIT PCM as well as native DSD decoding (up to DSD256) via USB. 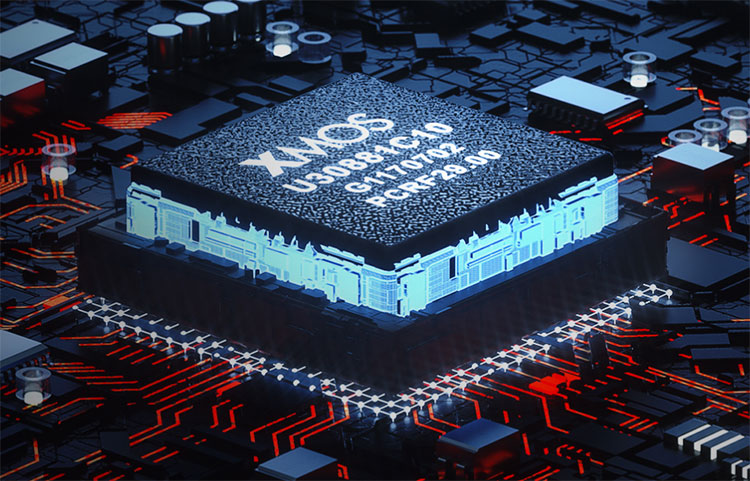 The next big update is the inclusion of a brand new amp module card. Despite what you might think, the FiiO amp cards are still being developed and rolled out on a frequent basis. This latest one is called the AM3E and includes similar output functionality to their latest M11 and M11 Pro DAPs.

This amp is now more powerful with better output numbers than the previous AM3a. It is also more flexible with both balanced and unbalanced outputs capability via a 3.5mm TRS, 2.5mm TRRS, and a 4.4mm pentaconn connector.

Bluetooth on the Q5s has now been upgraded to BT5.0 from 4.2. This means it can now accept the most up to date codecs in receiving mode including aptX-HD and LDAC.

Under LDAC BT5.0 your optimal decoding rate jumps up to 24BIT/96kHz from the Q5’s maximum aptX 16BIT/44.1kHz. BT receiving speed is also now going to be much faster than the older BT4.2 protocol if paired with a BT5 transmitter source and pairing distances likewise should have a bit more maximum distance without disruption. All the things we test out on page 2 of this review. 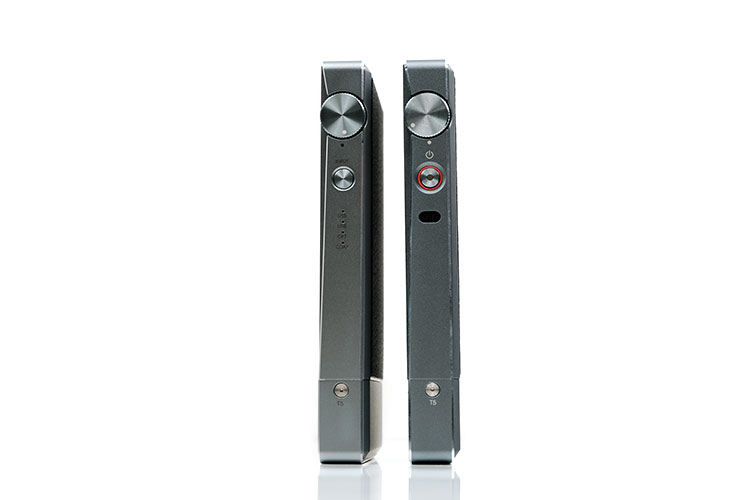 The basic form factor of the Q5s remains the same as the Q5 and both are really drawn from the X7 Mark II DAP sans LCD screen. That means an elongated but nicely curved sandblasted CNC aluminum body with a detachable amp module to the base.

The black leatherette rear panel layer remains in place and does a nice job of covering the softer plastic panel which maximizes the BT signal with its more porous nature. The primary playback and BT pairings controls remain on the left side panel of the Q5s as does the tiny hard reset pinhole a little bit further down.

So, what are the changes? The coloring of the aluminum body is slightly lighter on the central flat panel where the X7 Mark II LCD would be. It is a nuanced touch but it does seem to be more harmonious in coloring compared to the two-tone look of the original Q5.

The gawky gold hi-res stick on the front of the Q5 is now printed right into the finishing of the Q5s aluminum housing and is a more low-profile black color. The FiiO logo is now blackish and cut right into the panel as opposed to white and “stuck” on the top.

The rest of the labeling, particularly around the buttons and switches are darker in color but also more legible with more space around them to read than before. The larger ringlets of the coaxial and line out sockets on the top panel are slimmed down which does help with additional decal space. 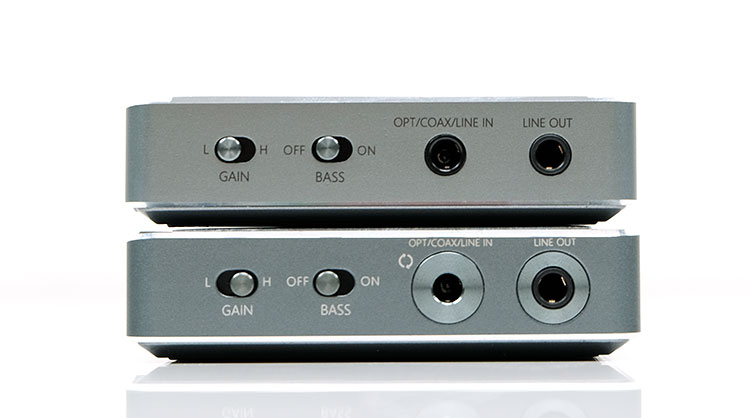 Another big change is the power on/off mechanism which has been removed as a button and replaced with a resistance switch built into the volume dial. The volume dial is unchanged with the same 45-degree grooved pattern for grip (and styling) and finished with a red ring at the bottom. However, the old power button is now replaced by an input switch button which is very handy.

ADC Volume control has been retained on the Q5s’ dial which I do welcome as the channel balance and consistency in volume levels from using this technology is excellent on the original Q5.

We are now down to a single USB socket on the base panel via the amp card. Ok, so this one I find curious because FiiO made a big deal out of using separate power and data transfer Micro-USB sockets on the original Q5.

This was on the principle you are channeling power away from signal to reduce noise and jitter. It also meant when updating the firmware you can have a consistent charge during the upgrade process and be sure it won’t brick and die in the middle of updating.

I can only presume that the higher grade XMOS USB chipset combined with the AK4493EQ DAC implementation is far better at handling noise and jitter than the older Q5 design and thus it is no longer required.

Whilst the core functionality has not changed, the means to access it and the technical ceiling has increased exponentially. Gone is the side panel LED function indicator replaced by a much simpler input selector for USB, line out, coaxial and optical inputs. I much appreciate that. It could be argued its old school but the simplicity makes it much easier to understand for me.

You still have the same functionality on the left panel with the three raised physical buttons that have a primary playback control and a secondary Bluetooth pairing mode feature. It is from here you pair with your source transmitting device.

You simply press and hold until the LED bar on the front plate flashed red and blue then pair with your smartphone etc. Once paired the LED will stay on a constant blue color until you disconnect.

These remain the same on the top panel with a high and low gain switch as well as FiiO’s bass boost system. Aesthetically the labeling and spacing is much better and easier to read and as mentioned the right panel input selector makes these more accessible to use than on the Q5.

The new AM3E amp does change the I/O landscape of the Q5s base panel options and one which brings it up to par with the M11. You now get pretty much all the analog outputs worth having in one amp module. You get a single unbalanced 3.5mm, balanced 2.5mm TRRS, and 4.4mm balanced pentaconn.

Now you will notice that the micro-USB port form factor has been retained on the AM3E module because it is really a modification of the original AM3A module from the Q5 than a complete rethink. I would love to see these cards come with USB-C but perhaps design-wise that is not possible.

The good news is that XMOS XUF208 USB decoding chipset upgrade which allows USB-DAC PCM rates up to 32BIT/784kHZ and native DSD decoding is retained which keeps the Q5s very competitive for digital. No MQA though which is still a bit of a miss for me.

Whilst the AM3E is based on the core AM3 line the performance numbers are improved over the AM3 and Am3a from the original Q5. Jitter, noise and distortion improvements are going to come more from the AK4493EQ technical capability than the amp itself.

Any tonal differences will also likely to be largely from the new DAC chipset as the same opamps from the Q5 are used in the Q5S for the LPF and OP+AMP duties. What has changed is the output power numbers which FiiO seems to have tweaked for higher levels under load. Potentially better levels of dynamic range and perceptible detail with more demanding headgear is possible with the Q5s compared to the Q5.

You go from 160mW on a 32Ω unbalanced and up to 440mW balanced on the same load on the Q5 to 210mW and 560mW on the same Q5s settings. Note, the 2.5mm TRRS and 4.4mm pentaconn outputs share the same stage so their performance is the same. The Q5s simply switches to whichever one is active and you cannot run them both at the same time.

FiiO has swapped out the older aptX only Qualcomm CSR8670 from the Q5 for the more modern and better-featured BT5 capable CSR8675 Bluetooth chipset in the Q5s. This allows the Q5 to receive not only a BT5 transmitted signal but to also receive well beyond the Q5’s aptX limit with LDAC and HWA firmly on the menu.

If you happen to have an Android smartphone or DAP with Oreo upwards and the likes of the LDAC capable Sony DAPs this will make big a big difference in terms of distance, dropout and audible sound quality on the Q5s compared to the older Q5.

The accessory lineup seems to have remained largely unchanged from the original Q5 picklist. That’s good news for you if you are coming to the Q5s for the first time or anxious any upgrade might mean you lose your favorite addon.

The box itself is fairly typical FiiO. It is professionally done with not a huge amount of fuss in materials. It does have the usual origami infused cardboard folding affair on the inside to hold everything together.

I do hope there will be a new leather case soon for the Q5s as whilst the original Q5 leather case fits, the button positioning is off and makes it relatively unusable. You still get the netted black drawstring pouch which, while adding some needed protection, is much too loose to adequately hold the Q5s. 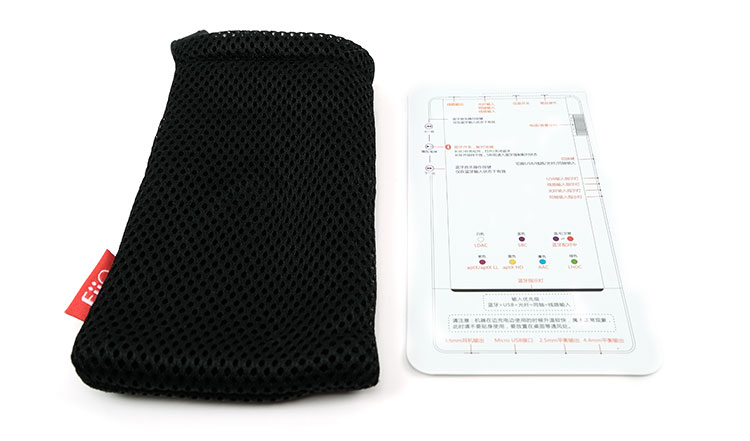