This will be my 3rd encounter with AAW products, the first being the musical W300AR custom and the second being their first universal IEM, the budget friendly Nebula One. In each of these releases, I got a clear sense of the AAW thought process. This is not just corporate off the production line vanilla earphones; these guys enjoy what they are doing with audio gear and are putting something out there that, for one reason or another, catches the eye. The Q In-Canal Monitor could not be more eye-catching, more focused in vision and at SG$299 (US$220) more mid-fi than the Nebula One universal IEM. Yup, it’s another universal product from AAW but there is something very different about this one.

Let’ start with the claim that the Q is perhaps the smallest ICM in the market today. That is not a typo, it is technically an ICM or In-Canal Monitor and not to be confused with the term IEM, which is an In Ear Monitor. This little guy is smaller than the darn tips fitted on it that’s how small it is. I know some stripped out IEM dynamic drivers that are bigger than these ICM’s also.

Price wise this is not a budget ICM either. $220US is pushing mid-fi easily and as such AAW know that this type of product will have more appeal to those who fully buy into the iGadget mobile lifestyle due to its unique proportions as well as place it into audiophile territory given the price is closer to a few well-known competitors. You are talking about Oriveti, Fidue, Campfire Audio, JVC to name but a few, all with good quality earphones at a similar price. The one thing that will give the Q a visual edge though is that diminutive form factor. It’s a big pitch for such a small ICM.

Let’s start with the dimensions. The Q form factor measures in at just 8.8mm in length, 6mm in diameter and weighs less than 1g per side. In context, the Westone W4 weighs in at 12g and I tend to think of that as one of the lightest of that type. It is also ten times lighter than the 10g woody Zero from Shozy which pretty much puts it in the category of Ant-Man audio gear.

The microengineering deployed to make something such as the Q is quite remarkable. Inside the 8.8mm length, 200-micron thick, milled stainless steel shell sits a 6mm micro dynamic driver, leaving roughly 1.4mm either side and maybe less than 2-3mm top and bottom for everything else to sit alongside it. That is a very small acoustic chamber. Too small for any regular diaphragm to work properly. AAW have solved that problem by placing the driver in the front cavity of the acoustic chamber with the diaphragm right at the tip. The theory being this actually will reduce resonation issues and keep everything sounding coherent and smooth.

AAW’s driver diaphragm has been built from the ground up to take into account the limited space the Q has to work with to get a proper dynamic driver sound. The body of the driver is steel the rest is a ultra-thin bio-composite diaphragm. This thinness of this diaphragm, combined with a very tight fast moving center ring and a more flexible outer ring, allows the Q driver to deliver a pretty impressive 10Hz to 40kHz frequency response on paper. That’s a decent, though not earth-shattering, bass performance combined with plenty of high-end extension on paper. 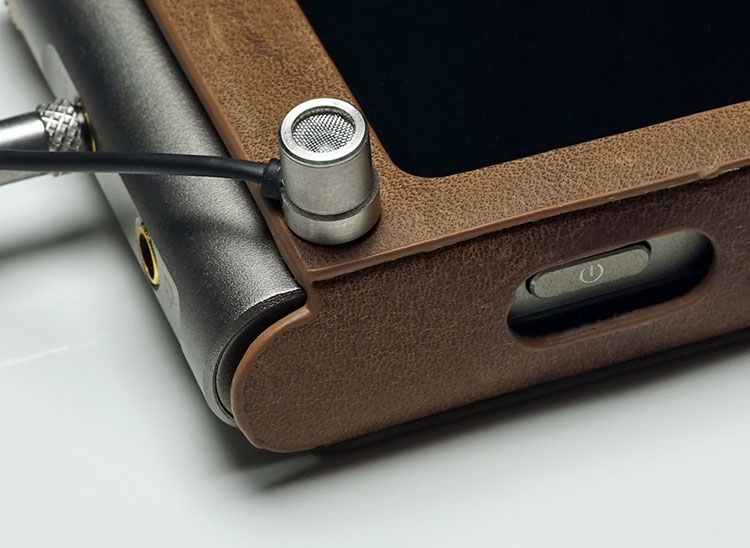 Literally, you stuff the Q down your ear. That might seem slightly disconcerting at first glance but the after a few false starts it slotted right in. In the back of mind, I am thinking crazy thoughts of the Q sliding all the way down the canal never to return but that’s what the tips are there to guard against.

These tips are designed by AAW precisely to prevent the micro units from slipping into an eternity of audiological and biological purgatory as well as getting the seal just right. And they do just that I might add. The seal is excellent, even with the single bore tip that comes stock on the Q. If you need more there are some even bigger foams that should really increase the passive isolation by a good few dB.

Hilariously the tips are bigger than the Q bodies but mechanically they really needed to be or else the whole concept simply would not work. There is nothing pressing against the outer ear either which feels remarkably comfortable and makes you wonder why no one thought of this before. 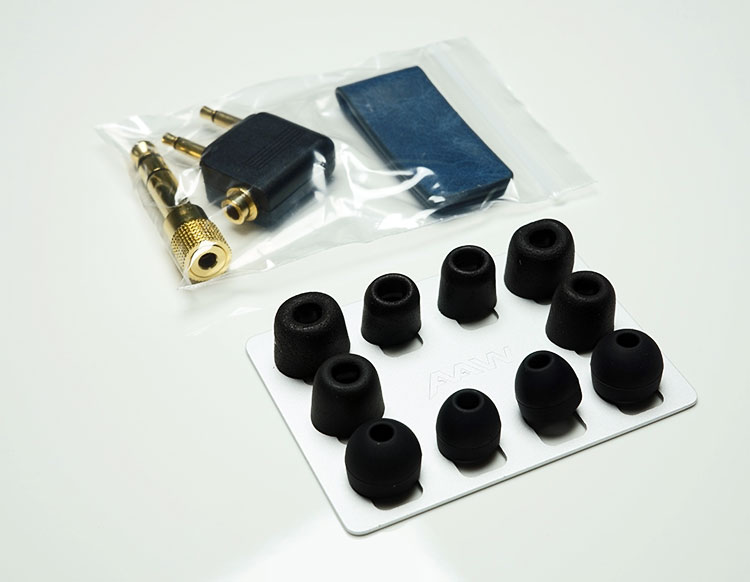 The Q is a non-detachable cable design and done on purpose. The mechanics of designing and using a detachable solution might sit well with cable swappers but invariably it would blow the proportions of the Q form factor far away from the design goal of making the smallest ICM in the world.

Instead, AAW developed an embedded SR system using flexible TPE materials that are specifically designed to cope with strain and swing movement. Given also the fact it an in-canal fit the concept of either a stiffened external SR or a detachable module made no sense. This needs to glide in and thankfully it does.

The OFC cable itself is approx 1,2m length so a decent length for portable use and suffers from very little memory retention with that supple nylon cloth coating. Microphonics are low but not super low and that’s understandable given that the cable is almost inside your ear. You can reduce that noise level further by using the supplied cable clip in the accessory kit or wearing the cable over the ear. Isolation is much the same whether worn straight down or over the ear. Both the y-splitter and 3,5mm jack are designed with the same metal materials and finish and AAW have also included a fairly discreet black rubber chin strap just above the metal y-split tubing.

Unfortunately, the package I received is sans retail packaging due to delivery constraints but the accessory set is pretty good actually. Inside you receive:

The tip selection is rather like the RHA and Noble’s silver metal tray design with each tip occupying its own dedicated slot. Sadly, you cannot fit the tray inside the rather diminutive blue strapped carry pouch which is a shame since you have to carry it separately leaving a bigger chance of them falling off and being lost as a result. 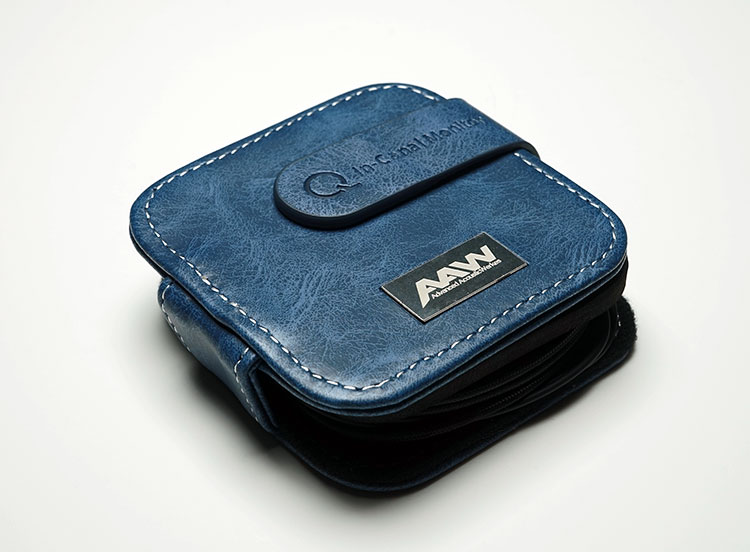 The little blue carry pouch is built on the same design philosophy as the IE800 from Sennheiser with a foam contoured top cutaway for holding the drivers and jack and the rest of the cable sliding through and wrapping around the side. You then simply close the flip top and press down on the magnetically sealed strap and you are good to go. It’s very small, very pocketable also and fitting for the Q’s design vision.

The Q needs a bit of power to sound optimal but when it does it really impresses for a 6mm micro driver. Tonally, the Q has a fairly clean tone with a warm and natural mid-bass elevated low-end, a neutral midrange with a slightly elevated upper midrange and an energetic but very well extended treble performance. It is not a v-shaped profile as such, though there is a dip in the lower mids which keeps the Q from sounding overly thick or suffering from bass bleed. The emphasis here is on a tactile but musical response pitched more for modern RnB, EDM and pop than out and out rock or metal. It is not hugely detailed and analytically it might come up a bit short but in return, it is delightfully engaging and pretty easy on the ear for long listening sessions.

Bass on the Q is full sounding but tuned with a mid-bass elevation around 100-250Hz and instead, rolling off the sub-bass presence once you start dropping down to 50Hz and beyond. The mid-bass elevation is not terribly sharp, more of a gradual plateau of sustained weight and body than a hard-hitting slam. Once you start moving beyond 250Hz it starts dipping again into the lower midrange keeping things muffle free but losing a bit of weight on the instrumental low end.

What I did find impressive was the quick yet natural sounding decay from the Q’s driver bass presentation. It’s not quite BA level but I certainly didn’t find it languid, slow or muddy and keep and an impressive level of definition, particularly on modern sparse sounding RnB recordings which have been all the rage these last 12 months.

The Q’s midrange is decidedly more neutral sounding than its bass performance but it is not exactly overshadowed either. That little dip into the lower midrange allows the Q to keep a healthy separation and minimal bass bleed. At times though the lower mid-range does feel a touch thin and recessed compared to its upper midrange which is more energetic by comparison. That lack of lower mid-range body doesn’t really blend as well with crunching low-end guitar work despite the pleasing clarity. It does feel more suited instead to genres which get their power from a little lower such as EDM. Vocals are accurate sounding with male vocals sounding a bit more neutral and less energetic than higher pitched female vocals. On the

Vocals are accurate sounding with male vocals sounding a bit more neutral and less energetic than higher pitched female vocals sitting on a slightly more elevated upper midrange. On the flipside, female vocals have a touch more sibilance and energy than male vocals which are generally a bit smoother sounding.

Treble is energetic, sparkling and articulate. A slightly forward nature will give a nice perception of detail in the Q’s top end performance. Lower treble though has a slightly peaky 5-7k range which makes higher pitched instrumental work sound a touch brittle or unnatural sounding such as synth or high hat but it is not as extreme and can settle down progressively depending on the power supplied to the Q. Good amps will control it more and keep it largely coherent with the rest of the treble performance. Treble extension is actually very good with some impressive articulation and plenty of headroom.