I remember the first time I popped a universal Unique Melody IEM into my ears in mid-2011 and wow, I was blown away by the soundstage, the bass performance and the clarity of sound. Until then I was not convinced IEM’s had what it takes to compete with headphones. That IEM was the demo unit of the hybrid Merlin. I promptly ordered the custom version and by Sept 2011 I had my first CIEM. That dynamic driver made the difference and to this day I still love hybrid IEMs for the way they can deliver a deep and natural sounding bass response combined with the speed and clarity in the mids and highs that you can only really get from a quality BA design.

Of course not all are built to the same exacting specification, some have been bright, some overwhelm with bass and to be honest it has been hit or miss since then. However, roll on 2016 and back comes Unique Melody with a brand new hybrid IEM called the Martian. It has not one, but two dynamic drivers and thus pushing us back into the ‘more is better’ debate about just how good an IEM can be given the number of drivers stuck in the shell. The pitch here is that two is simply better at one for dynamics, resolution, depth and decay of bass. They also seem to allude to new BA drivers specifically for the mids and treble but as yet not confirmed. It may well be that these new BA drivers are part of the overall re-tuning UM have been doing with the majority of their existing line up.

Priced at $699 the Martian is marginally cheaper than the original UM hybrid, the single dynamic, quad BA Merlin ($879). Just to note, UM’s re-tuning has resulted in all units being branded V2 so the Merlin I currently have is the V1. The new V2 Merlin is a little higher priced than the original. You can still buy the Merlin V1 in universal format starting at $879 on the main UM website or go for the new V2 version which I believe is selling for $1159.00 base price. One important point to make out is that the Martin is a universal format only IEM from UM and they will not be releasing it in a custom version at the time of writing nor will they offer a service to reshell it.

The UM Martian is an acrylic universal shell with just enough contouring to ensure you get a comfortable fit no matter what size or shape of ears you may have. The Nozzle is a relaxed fitting meaning it is not that long in comparison to custom fits and allows enough wiggle room for a wide variety of tips to be used from single bore to flange. I believe at the time of writing you can a variation of colors for an additional fee. The stock color it comes in without a fee is black. If you want a change in color you will have to request it. The front is branded with the Unique Melody logo (one of a few variations you can choose one of their custom units).

There are a couple of important areas in the build of the Martian that I need to point out. The first is the brand new connector style UM have decided to use after years with the traditional recessed 2-pin format and the second is the actual depth of the driver housing in order to accommodate the dual dynamic driver design making it one of the bigger UM universal units out there. Those who have used dual dynamic driver IEM’s before shouldn’t really be surprised at the depth aspect of the Martian. I have yet to come across a slimline DD IEM in years of testing. For those used to all BA designs or just single driver IEMs, these will stick out of your ear just a little more than normal. 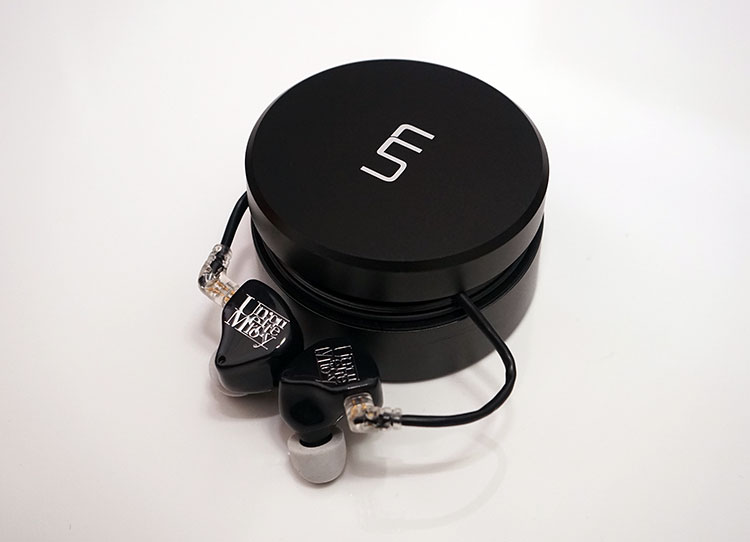 The UM Martian is sporting a new type of cable connection also used by the likes of UE. It is still actually a 2-pin solution but this time, it is a protruding socket instead of a recessed or flat socket. In theory existing aftermarket cables will work and fit this new connector but it is a bit ugly in how it looks and I am not convinced the durability is as good.

However, the new connectors on the stock cable look solid and UM does claim that the new design eliminates the possibility of loose connections with the slide over plastic connectors on the cables. UM also claim the new connector design is more rugged and better at preventing particles and dust from entering during use as well as a more ergonomic design for fitting around your ear. In my review testing, it is a heck of a lot easier also to match left and right without checking the colors. You just know automatically which one is which.

Since it is a universal IEM the fit and seal of the Martian will largely be tip dependent. UM have stuck on the foams as stock when you first take them out of the box and this is as good as it gets in terms of noise isolation and seal. It is pretty darn tight, almost custom level, which says a lot about the choice of tips UM have included. The contours of the Martian are excellent also and fit very well in my own ear. This is about as close as you can get to a custom without it being a custom. Passive isolation is well above par, they sit rock solid in my ear and are very comfortable indeed.

As I mentioned though the Martians do stick way out of your ear for a universal IEM. Think Roxanne or Lear BD4.2, (also dual dynamic), level of sticking out and you are in the right direction. The new connector designs do actually feel a lot easier to manipulate around your ear with a lot less use of ‘origami skills’ to get that cable bending nicely around your ear. Overall a very satisfying rock solid fit and seal.

UM are using a very pliant and flexible dual braided 1.2m OFC cable terminated with the new style 2-pin connectors on the top side and finishing with a right angle 3.5mm gold plated right angle 3 pole jack on the other side. If I am not mistaken this is likely to be the stock cable UM offer on most of their mid-tier customs so it’s pretty decent value if you ask me. Of course, it looks like just about any other stock CIEM cable I have seen before but that is not a bad thing because they suffer from zero microphonics and incredibly easy to work with having zero memory retention. 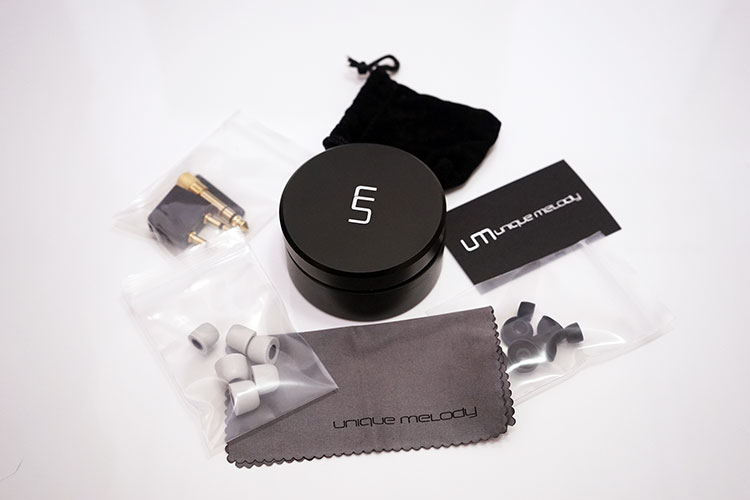 UM have long since harmonized and modernized their packaging for all their IEM and CIEM range and the Martian is no different. The level of accessories and packaging is actually very good with a quality hard metal screw lid case, a smaller soft carry pouch, a range of foam and silicone single bore tips in small, medium and large as well as a quarter jack and airline adapter. UM have also stuffed in there a cleaning cloth as well as a calling card. Perhaps the only thing missing is a cleaning pick tool for the nozzle which some other CIEM companies are packing with their product lines but otherwise, I can have no complaints. 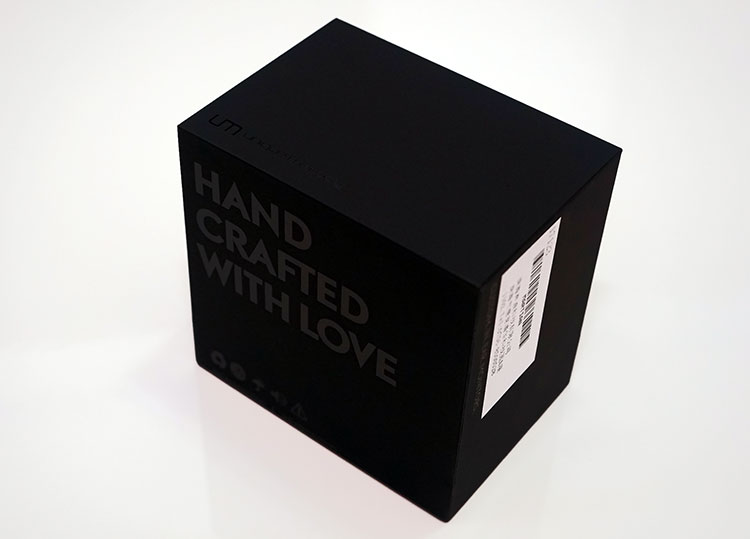 All of these accessories comes neatly packed in their standard “Hand Crafted With Love” black retail boxes which are also used right across the entire range. Gosh, this is nit-picking of the highest order but I do wonder if a different color scheme other than black for the boxes would be ideal for each product line just to give it a unique touch. Am I asking for too much?

The Martian’s bass signature is not what you expect it to be for a dual dynamic. Sure it hits hard, excellent bass in both depth and body but it is very controlled and articulate and it honestly is not the first thing that hits you when you start listening to them. It is an incredibly likable bass response with an elevated sub-bass tuning rather than a curt mid-bass slam so you never feel it dominating or bleeding into the midrange.

The Martian bass control is critical because the Martians, when not pumping out the bass, actually sounds fairly mid-centric with a slightly forward vocal presence. Instrumental separation is actually pretty good with decent imaging but overall I would classify the Martian midrange as sounding a little more intimate than say the Merlin which is just that bit more expansive. It also sounds a touch thinner in body than the Merlins quad BA setup and whilst I wouldn’t deem the timbre as being unnatural it isn’t as inviting as the Merlin’s richer tones. It’s clean, clear but just lacking a little texture compared to quad BA equivalents.

Treble on the Martian is lively with very good detail and pleasingly sibilant free. It does have more brilliance in its upper treble sparkle but sensibly avoids any lower treble unevenness or nasty peaks so cymbal and percussion work flow smoothly without distracting. Much like its mids performance The Martian does lack a little treble body compared to quad BA’s but it is very competitive and far smoother and more refined than say the Fidue’s hybrid A83 strident treble performance.