So when it came to writing about the Sony PFR-V1 I just could not figure out where to classify this left of field designed headphone. Yeah headphones is a working title but the intent is full audio, albeit on a miniature physical scale and you are in no doubt when you unpack it and slip it on your head that you better get used to treating these as full audio as going outdoors in them could seriously be a no go.

Sony of late have not really gone for flagship damage in the way we have seen with the HD800 from Sennheiser, the array of Stax and the Beyer T1. Instead from time to time outside of their mass consumer models they have tried to think slightly out of the box. The SA5000 was a case in point in terms of look and feel and for many the SA5000 was and still is a fantastic and very articulate headphone. Don’t even begin to mention the huge and much sought after R10, alas now sadly defunct. You only have to look at their PC range with their Vaio P series to see that from time to time the R&D dept does like to have a bit of fun.

However these experiments seem to be fleeting, as if almost to test the market with what will stick and then move on to the next if it does not. And so is the case with the Sony PFR-V1, launched in 2008 and promptly discontinued last year, the PFR-V1 looks ugly and awkward, but after spending sometime with it, its one heck of a sweet sounding ugly duckling. If only people could get round the looks I guarantee that you will enjoy a whole new listening experience which for me was right up my street in terms of my favored EQ. 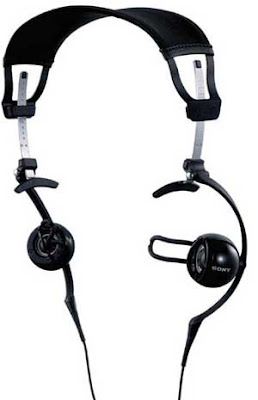 Now the basic premise of the PFR-V1 is that in fact they are not headphones as you know them with the cup covering your ear and projecting air down your ear canal. They are not electrostatic in that sense either having a very clear diaphragm dynamic speaker type setup. They are indeed external speakers, tiny ones at that, mounted on a wire frame that sits, ergonomically speaking, around your ear with an odd little loop that sits just inside your ear representing the bass reflex.

If you can read Japanese all the better but I think you get the idea from the picture above – nothing goes down your ear canal or sits on your ear, sound is delivered to the entire ear and not just down the canal which in theory is supposed to be superior to just throwing it at your skull.

So lets try and do the numbers game first:

What you get in the box 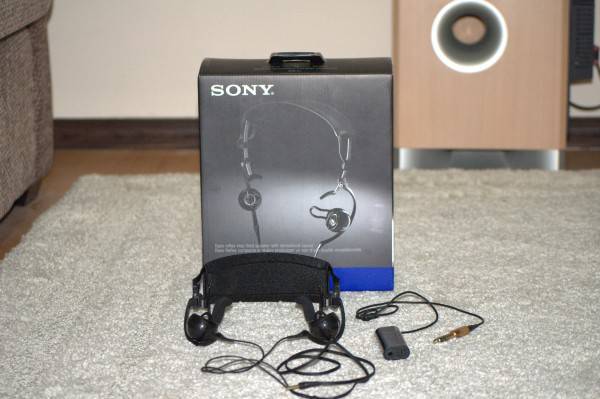 Sony have have done well in this department with a nicely constructed leather case with superb internal layout and a twin pocket for the accessories. Considering this retailed originally at $500, picking this up at $150 now makes this a real treat for the price. The pocket contains an extension cord (gold plated stereo mini- jack -> gold-plating L type stereo mini- plug, 3m), carrying case, user manual and low and behold, what do we have here but a little in-line amp powered by a few AAA batteries? Well its an amp alright, and initially I was going to ignore it with my EF5 and Bada Ph30 sitting there I felt I had no need, but actually later on in this review you will come to appreciate that it really does sound better with it on. 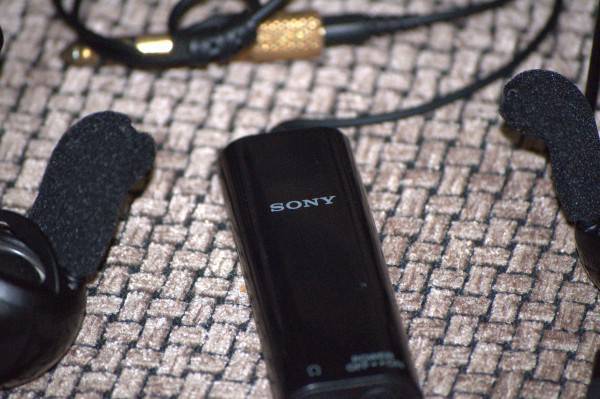 Importantly in the kit there are two little mic boom covers. These are for slipping over the bass reflex coils and from my experience I suggest you do just that before you start using them for comfort and bass reasons since without they are a tad cold and kind of bass light.

Putting the package to one side we now have the interesting process of putting them on your head. The trick to getting the best out of these headphones is positioning and man they are hard to position on the head. Just when you feel you have the sweet spot you go and find another spot that is slightly better. There are a ton of spots and the sq goes up and down like a yoyo depending on where you position them. In the end I found putting them at a slight angle on my head with the bass reflex firmly at the base of my ear canal and the speakers pointing in a touch gave me the best or most favorable sq. Once you have that sweet spot don’t touch them until you are done or you will just go through the entire process all over again and if you are on a long listening session this is going to be a royal pain.

Putting your fingers in your ear beside the bass coils makes for a huge jump in bass but at the cost of detail and a dark veiled SQ so i would not advise that unless you are completely mad and don’t mind listening to your music with your fingers stuck in your ear. If you want a little touch more bass then buy a set of 6mm rubber grommets and put one each in the bass coil loop and put the mic cover over. Bass boost for less than 10c and you are good to go.

The Sony’s have zero isolation and has often (though perhaps unfavorably) been nicknamed the baby AKG1000 since this is a similar characteristic. So when you plug them in and turn up the dial just remember they are indeed tiny speakers and as such anyone within 10 meters is going to know not just that you have music playing, but what exact song and more than likely what year it was published in – that is how little isolation I am talking about. My main concern outside of that is whether or not I could actually enjoy this at all in say a cafe, train or plane or even at home. Since it had no isolation was it not a case of my own enjoyment being ruined? Not a chance! This is hard to explain but they excel in blocking out background noise like regular cans do when playing. When playing light acoustic music or classical its even better; they genuinely do come off as a small speaker system in the room and I personally found this very relaxing and involving.

Now this is where it kind of tricky because there is not much to compare with on a like-for-like basis. Putting aside the initial wow factor of having the speakers outside my ear in that fashion I would have to say the first thing that bites and grabs your attention are the mids and the sound stage. The in-line amp certainly helps in the respect. Having tested with a mini3 amp and a go vibe petite also I can assure you the little amp is a winner for me. It just gives that extra edge to any amps pre-existing presentation, makes the stage a tad bigger. Now possibly its just a trick of the loudness wars but it works for me and a few others who tried it. Without it though you can try the stock extension cable so preference wise you have choice.

The sound stage and imaging on these are big, open and involving. Not huge in the sense of a Stax or AKG1000 but for their size they are superior to many large mid-fi cans such as the AD2000 or some of the mid ranked Senns. Positioning is accurate and detailed and instrument separation is above par. Playing back Sileypud off the Ultrasone Demo CD, known for its purposeful instrument positioning brought out the best in these. It’s only drawback for me is that they can lack the aggression of a Grado on certain genres that need that in your face approach sometimes regardless of sound stage qualities thus limiting the value of the big sound stage which honestly works better for concert type music – classical, atmospheric and acoustic.

The highs shimmer, too much though without the bass reflex coil mic boom covers off. This is a pain and too sharp for all but the most treble resistant ears, having them on helps immensely with the bass and gives much more body to the sq overall. These cans convey a very sweet and forward reproduction on vocals without the intrusiveness of the Grado. They are not as polite as say a house Senn, they remind me more of the ATH – AD2000 in terms of tonal qualities. The AD2000 was a mid king with a lush airy SQ that was so musical and easy to listen to. Now the Sony’s can’t quite match that with the highs being a tad bright on occasional but they can present a very warm and lush response when required.

So the big thing when I got these in the advance read up was the bass – cries of “no bass” rang in my ear and that is what I expected to be honest, but with the coil covers on and the right sweet spot for positioning this is just bunkum. Now don’t stick these on expecting M50 levels of slam, nope that is not going to happen, think Stax – it is there no problem, just not at hip-hop levels guys so pull your pants up and turn off the pimp mobile. I don’t see these headphones appealing to team bass for sure, but its just false to say it has no bass.

I have to note at this stage do not be deceived by their diminutive size and 16ohm rating. They are speakers and as such they suck in a bit of power. Much more so than I thought would be the case. When I first tested them I was running them out of the jack of a 5.5g Ipod thinking to play safe but it didn’t suffice. The Go Vibe Petite amp/dac – one of my favorite small amp/dac’s went all the way on the dial before I declared myself satisfied. The mini3 portable amp went to 1pm on the dial. These are not that easy to drive to be honest and could benefit with a bit more power. Luckily things get better with the bigger cousin of the Petite, the Go Vibe Magnum and they shine from the stars with the EF5 power tube amp (albeit only at 10am mind you in the dial). 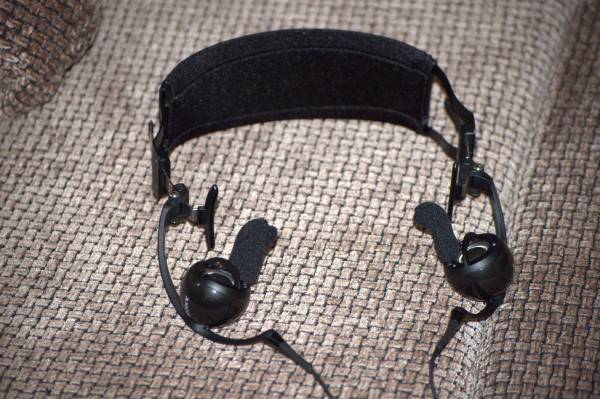 If you are out and about, value your credibility as a fashion looker and into huge R&B or mind melting bass then perhaps not. If you want a unique experience with superb detail, big sound stage and smooth warm sq with prominent highs and mids and could not care less about how it looks then this is for you.

If you are seeking something different, have a penchant for complex music and don’t mind the lack of slam you will enjoy these. There are a few new units knocking about on Amazon now at about $180 and for this price they are a bargain for what is now a collectors item.