Unlike the Violectic V281, it does not bludgeon you with a visceral low end, rather it is more linear sounding, trading weight for speed and body for spaciousness. And my word, the Formula S soundstage is just that; really open sounding with bags of headroom and a very black background.

Being solid-state, the Formula S might lack a little of that rich lushness in the timbre that I enjoy from tube amps but at the same time, you couldn’t call it lifeless, dry, or analytical. Instead, it delivers a very precise and detailed sound that carries a slight sweetness to its timbre.

The timbre is nothing you could define as inherently warm but it does have a very pleasing harmonic balance. I would contend there is perhaps a slight even harmonic lilt to the sound so instrumental timbre is more wet than dry. Certainly, when compared to big powered mid-fi amps such as the Cayin iHA-6 it comes across as a little smoother and more liquid sounding.

This is the kind of amp that pairs incredibly well with the likes of the HD800 and Susvara, two headphones that I tend to think of for excellent detail and staging qualities. The Susvara is one of the best planars out there for its speed, something which the Abyss is noted for also, so it makes sense that with the Formula S pairing you get an emphasis on clarity and very precise imaging.

Throw on Lyndsey Stirling’s “Mirage” from her Brave Enough album for a wonderful example of how well this pairing performs. This is an incredibly complex and fast-paced track with loads of instrumental layering, particularly string and vocal. It shifts from explosive to quiet extremely quickly and requires a very high level of dynamic range to get that scale and precision just right.

The Susvara/Formula S nails it without being overly aggressive or sounding so ethereal as to lack any sort of gravitas. The “pitter-patter” of the percussion and string arrangements are almost electrostatic-like in their clarity and articulation. A very immersive and engaging experience and a pairing I wish I had when I originally completed the Susvara review last Dec 2017.

This is especially with fixed voltage line-in sources such as the Hugo 2 and the ALO Audio Continental Dual Mono. Opting to use a good pre-amp will produce better results in a low gain.

For pre-amps, I preferred something very transparent and neutral when paired with that Formula S. Excellent pre-amps such as NuPrime’s CDP-9 or even the little Burson Play Classic Configuration did a marvelous job providing a much better level of dynamic range than with weaker fixed voltage mobile DACs.

The balance of the Formula S is such that it pretty much pairs with any headphone, even the most demanding such as the Susvara, HD800, and to a lesser extent the HE6.

I still have a slight preference for the LCD-4 and LCD-2 paired with the Violectric V281 because of its more explosive low-end gusto and sub-bass rumble. I guess that is a little in terms of preference but I do always see that as the strong point of the Audeze LCD range, its low-end and lower mids presence.

The Formula S synergy really is at its best with quicker-paced and very open-sounding headphones. Presentations that have an emphasis on clarity, perhaps a little delicacy in their sound, and capable of a very expansive but accurate soundstage.

Thus headphones like the HE6 will actually power quite well from the Formula S with excellent depth and space it does fall a little short in showing off the Formula S’s capability with headphones that have a more precise level of instrumental separation and imaging.

The top two headphones for me that really paired well with the strengths of the Formula S were the Susvara and HD800. More Susvara than HD800 due to the slight tonal hardness of the HD800 lower treble.

The Susvara was the smoother and more engaging of the two for a wider selection of genres. The Formula S will not alter the inherently fussy treble 7k peak of the HD800 but it will do a great job filling in that very wide and airy soundstage.

The Studio 6 is ALO Audio’s flagship headphone amp. Like the Formula S, the Studio 6 is also Class-A construction though its design is a single-ended triode (SET) circuit design rather than BJT solid-state. Power is provided from a “virtual dual monoblock” design compared to the R Core transformer of the Formula S. Both amps have single-ended circuits, neither are balanced designs.

What makes the Studio 6 unique is its triple input and quadruple single-ended headphone outputs. Its load-balancing is such that you can connect 4 beefy headphones at the same time and experience no loss of power to each individual headphone. A bit of a reviewer’s dream really for comparing headphones from a single amp.

In terms of outright output power, the Studio 6 is rated at 1W into 32Ω compared to the Formula S’s 2.1 watts into 46 ohms. If it’s pure power then the Formula S has the edge in terms of headroom for thirsty headphones though neither is really set up with the goal to be pure muscle amps.

The Studio 6 is warmer with a more intimate presentation and a midrange that is lusher sounding than the Formula S. The Formula S has a smooth and natural tone for a solid-state but it’s a little more articulate and precise sounding and slightly less euphonic.

The low-end of the Formula S is not as warm compared to the Studio 6 but it extends further and is able to deliver more detail and texture right into a sub-bass performance. I honestly find the Studio 6 just to be the slightly punchier of the two but not as tightly defined as the Formula S.

The Studio 6 delivers a natural almost analog-sounding midrange, like a live performance with all the even harmonic timbre you could wish for from a TOTL tube amp.

The Formula S is also very smooth sounding but is not quite as liquid as the Studio 6 in its timbre. Its harmonic balance is marginally more neutral-sounding than the even-harmonic dominant Studio 6. It will sound slightly cleaner but tighter of the two amps with a blacker background and better instrumental separation.

I actually think the Studio 6 has excellent treble detail and it is on par with the Formula S in that regard. However, the positioning and timbre are slightly different.

The Formula S treble has a bit more presence and perceptible articulation. I would content it is neutral in positioning though slightly further forward and more energetic sounding than the Studio 6. The 6 is more relaxed in its top-end, easier going but that should be no surprise given its tube design.

The V281 is physically the smaller of the two solid-state headphone amps but it is potentially the more powerful.

It can deliver a fully balanced or single-ended headphone output of up to 4W into 50Ω (balanced) with stepped attenuation volume control as well as pre-gain and pre-amping output options. It has more raw grunt than the Formula S using balanced mode. However, if both use single-ended, they have fairly similar levels of power.

At the heart, both are fully discreet Class A amps though in terms of power supply the V281 uses a more popular toroidal transformer power supply compared to the R Core transformer of the Formula S.

Both have options for multiple connections with XLR and single-ended though the V281 can connect 2 single-ended headphones at the same time. Violectric has also provided the option to upgrade to a DAC/Amp capability but I have never really been that impressed with it as a DAC. It is really the amp that is the performer and a perennial favorite of many audiophiles. 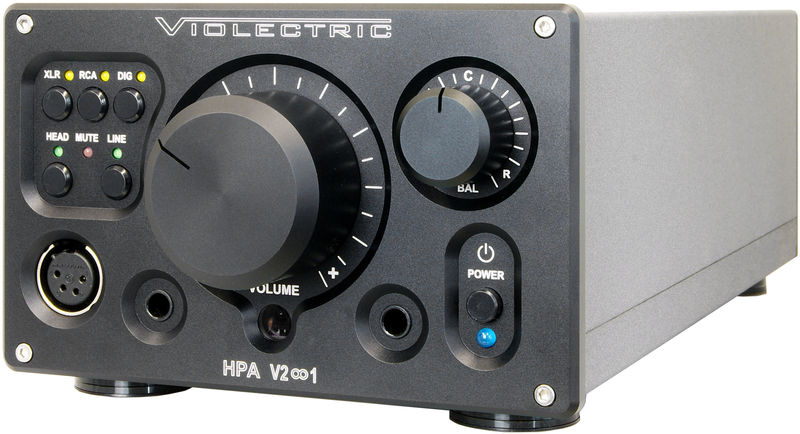 If you are using the V281 in a balanced configuration it will come across as harder hitting than the Formula S. There is more low-end body and it delivers a more explosive sound with better sub-bass rumble. Switching to single-ended on the V281 takes a little bit of crunch and impact from the balanced presentation. You get a little less dynamic range though it still remains fairly punchy.

The Formula S is comparatively more linear and also a little more liquid sounding. The low-end has fantastic depth and detailed texture but it trades a bit of impact and weight for a more spacious and open sound. The focus here is on clarity and detail in that texture rather than outright physicality.

Imaging is more immersive on the Formula S. The V281 sounds a bit more center and depth focused but it is more forward and aggressive sounding, particularly when opting for balanced output. The Formula S trades a little weight for better speed and more instrumental separation to get that detailed but open sound.

The Formula S also has a little more treble presence when paired with the same source/DAC. In this case, the LCD-4 is combined with the Chord Hugo 2.

Treble on the V281 is good, very good indeed but the clarity and separation on the Formula S are just a touch better. When I say better I mean a little more energy, headroom, and air rather than brighter because the Formula S stays incredibly sweet and smooth from end to end.

The Formula S is a true top-of-the-line solid-state amplifier. However, it does not shout out flagship through crude power numbers. Instead, it is much more nuanced in how it delivers its quality though it still has plenty of headroom for demanding cans. This is a linear but slightly sweet-sounding amplifier with a huge emphasis on resolution or detail, pace, and dynamic range.

It pairs wonderfully well with open and expansive sounding headphones, headphones that are articulate rather than visceral. I can see why the Abyss team tuned this amp and my short time with the AB-1266 pretty much matched my initial experience with the HD800 and Susvara.

My only wish is for Xi Audio to get their website really up to date to market the Formula S properly. It is a confusing mess with the English version a bit lacking in information and how to buy it. This is a gem of an amp, not just for Abyss users and it needs to be heard by a much wider audience than it currently gets.