When our buddies at Digital Walker asked if I wanted to review the LP I knew one of our guys had taken a shot at the True Blood M80 with great results so naturally, I was keen to have a look at the LP version’ myself. Great looks, high portability and some decent reviews on the net just added to my curiosity. I also have a decent range for comparisons such as the DT1350, the ESW9, the Aviators and even the HE400 to give it a good working over.

For those unaware, v-Moda is the brainchild of Val Kolton with the considerable assistance of designer Joseph Bucknall and the direct result of a party hard visit to Ibiza in Europe which is famed for it’s unbelievable dance parties and heavyweight DJ’s who often rise to fame on the back of huge sessions there. Essentially Val figured that Headphones are not just electronics but lifestyle choices and should be sold outside of the rather drab confines of appliance sections. To a large extent in 2004, Val was tapping into or kick-starting what has now become a cultural phenomenon of the fashion or consumer line of headphones by such tour-de-forces as Monster, Bose and Skullcandy which has sought to move headphones into mainstream lifestyling with great success. Only for V-Moda the sound quality does indeed count.

I remember somewhere on Head-fi Val spoke about the SQ of the Crossfade line pertaining to the fact his years in the music business have taught him the value of your hearing and to a large extent he has designed the sound to ensure that prolonged listening to the v-moda line would not do direct damage to your ears. After a few hours with the L,P I can understand his thinking on that and how it has shaped the listening experience which I will get into later.

Wel,l no kidding this package has real style. It puts other major and well renowned manufacturers to shame. Even the box has a ribbon which you must cut to open the box much like some sort of event. Open the box up (complete with faux-snake skin handle)and the first thing you are going to notice is this very weird but awesome alien type headphone case in which the headphones are housed. 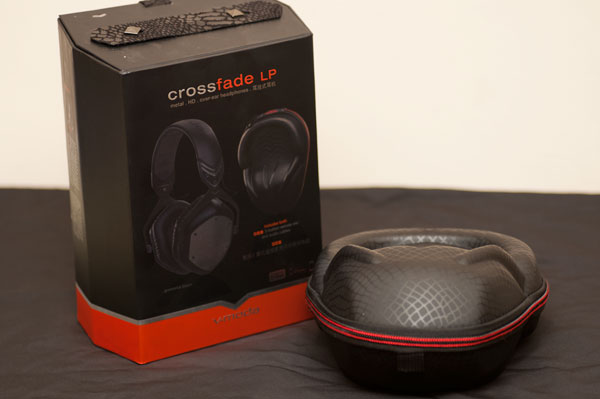 It looks pretty alien but you know it really works well to be honest. One of the best cases I have seen and very unique. Its pretty sturdy and actually the contours give it a smaller footprint than most regular cases. Open it up and everything has its place. 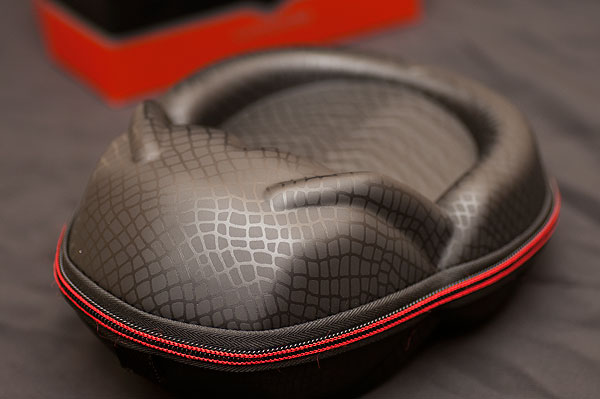 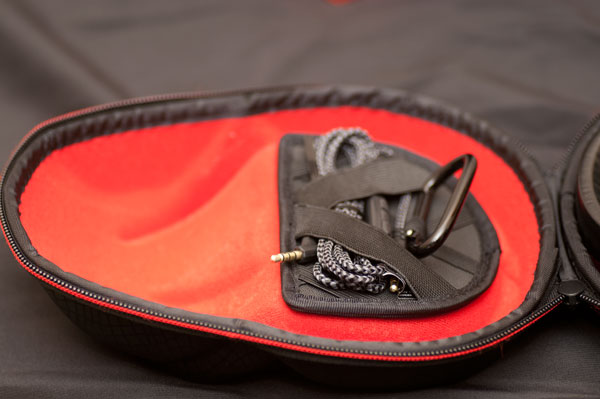 The headphones themselves can be fitted either side of the case with ease and being a detachable single entry headphone there is no wire mess with two cables being tucked away under a little elastic nylon holder. You will also notice a nifty little latch which can be taken out and attached to the case and say a bag or rucksack for extra portability. Something I might try myself on my travels next month. The cables are pretty durable looking and covered in cloth with one end straight and the other as a slight angle. Both seem to fit in the headphone but my preference is for the right angle coming out of the cup. It just seems a tad more natural. 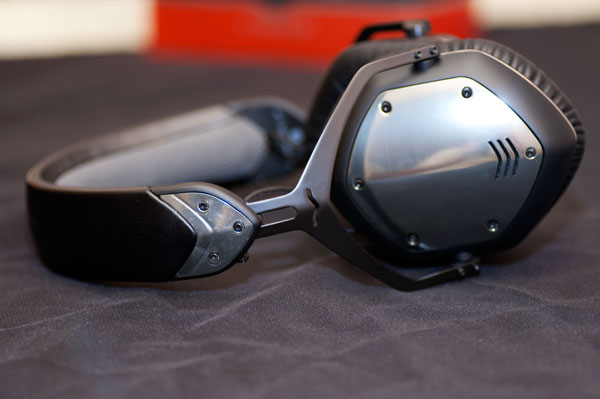 The headphone itself is very durable and very well put together actually. This is not cheap looking at all and much more distinctive than some of the more staid designs out there. Pair this beside an M50 or an HD25-1 II and this is the one that is going to grab your attention first. Fit wise the pads are very comfortable for an on-ear and just the right amount of pressure on the head. They term the LP as semi-open on account of the tiny slots at the bottom also on the faceplates. The headband is made of a stiff outer and soft inner and the cup gables are rather like the Beyer design only a little more aggressive in appearance. Its a sort of a mixture between gothic, metal and industrial in design coupled with the fact you can also have custom cup face plates which makes the whole experience a little bit more interesting and personalized.

As I speak also there is a white version out now and some may love that. I prefer bad-ass black to be honest but horses for courses!

Just a word of warning, like the ATH AD700 MK2 you got to slot the cable tight into the cup entry or else it won’t connect properly and give you sound from hell. This happened to me first time round and I damn near threw it away only to realize it was not securely connected.

Isolation and clamping is actually very good and the cup materials give a nice soft padding on the ears. The whole headphone is sturdy but light and something you can comfortably wear when walking around without fear of it falling off. Its a softer and better fit than the DT1350 and HD25-1 II and slightly better than the ESW9. The clamping is stronger than the ESW9, but weaker though than the other two. 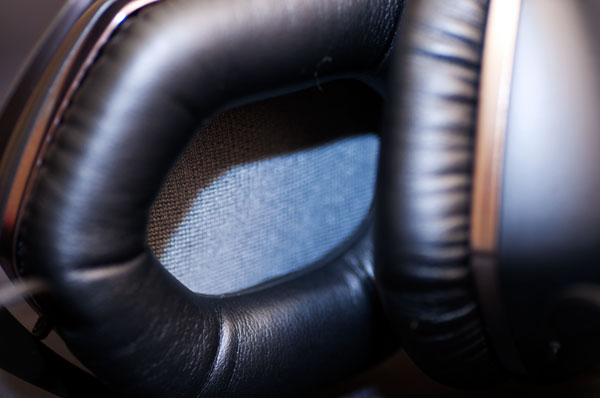 The LP is built from the bottom up giving more bias to the mid-bass and mids with a roll-off on the highs. There is a slight reverb (big hall echo) when I initially burned them in but it settled down after a few hours of solid play. The bass itself is punchy when needed though does not extend deep down as some other headphones or quite the same snap as saying the HD25-1 II, but a bit more weighted and thicker than the DT1350. Running Megadeth’s 1988 ‘Hook in Mouth’ from my Cowon X7 (flat EQ) and ALO National Amp the added weight of the National’s above par bass attack is excellent without ever bleeding into the mids. Definitely a mid-bass hump of sorts but not an ever-present one that distracts from the rest of the SQ. Overall the bass is rich and thick with decent extension without being overtly punchy.

Thankfully no bass bleed allowing the mids to to post better than average results with vocals. Not as strong or as forward as the more mid-focused and detailed DT1350 but cleaner and less recessed and smoother than the HD25-1 II. I still rate the ESW9 as tops for vocals and smoothness in the mids though – you just can’t beat a good woody sometimes. The tonality is very smooth and musical and the mids do not sound of place in the overall presentation. 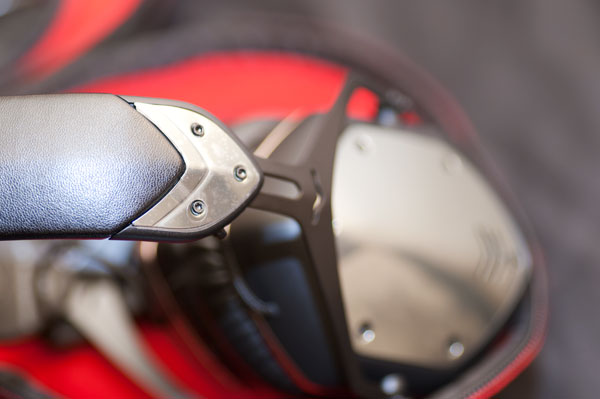 This is not a treble orientated headphone so those looking for sharp details, aggressive and fast attack will need to think again. It lacks the shimmer and the heat of the HD25-1 II and the detail of the DT1350 though given its overall smooth sound signature I don’t think this is surprising, to be honest. In some ways, its highs are not too far off the ESW9 without perhaps some of the articulation. Thankfully the LP is 100% sibilance free and for those who like a warmer laid back and smooth treble response that is non-fatiguing will enjoy this.

The LP soundstage is on par with the ESW9, certainly better than the HD25-1 II and slightly bigger than the DT1350. It does have a touch of reverb common in closed cans despite its semi-open nature. Imaging and instrument separation is again on par for closed headphones and I again ranked it just behind the ESW9. The warm smooth sound might make it seem muddy to others who are more used to the razor-sharp attack of say a Grado though.

So where does the LP sit in the plethora of today’s consumer-driven higher end headphone market? Well for starters its a winner for looks and comfort and unique appeal; the headphone stands out from the crowd thanks to its aggressive design, customizable faceplates and fantastic contoured headphone case which actually has a purpose. It is easy to drive, good isolation and clamping is just right for outdoors walkabouts. You will be noticed with this headphone that is for sure.

Sound wise its warm, musical and not overly analytical with a smooth response that is perhaps a tad too rolled over on the highs but retains solid strengths on the mids and a decent bass that is not overly dominant or punchy or have a typical consumer v-curve signature.

Overall I think the LP has plenty of potential and a solid debut for v-Moda on the on-ear market that is going to appeal to a lot of casual listeners and those with sensitive ears looking for a durable portable headphone.