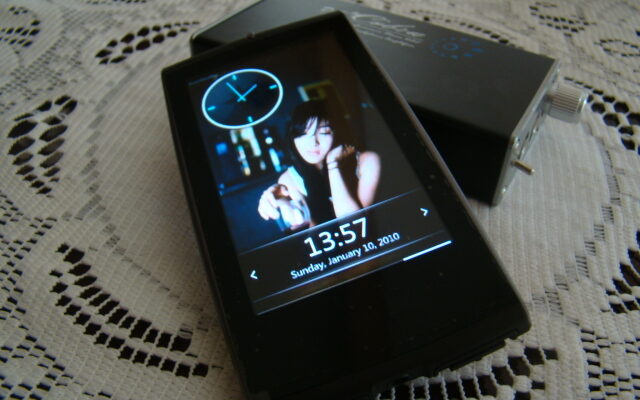 The S9 By Cowon

The box of the S9 is definitely a sight to behold – clean, elegant, minimalistic. Immediately you are greeted with a sexy shot of the PMP, and the AMOLED label on top, Cowon is surely bragging about the power of the AMOLED screen here.

The first thing that’s gonna get you when you open the box is the tons of included documentation, which, other than the warranty card, is practically useless (there’s an included manual, which is also useless if you have used any DAP/PMP before) going further and you are greeted with unit itself along with the included USB sync cable ( standard to 20 pin connector) and a pair of earphones (I was told these are rebranded Cressyn Earphones, but I didn’t bother trying them out anyway :D )

To the unfamiliar lot, the Cowon S9 may be mistaken as an iTouch clone/wannabe or one of those rampant china phones, well I beg to disagree. The Cowon S9 has the Korean Race Queen pedigree – petite, slim and very sexy. Its light to the touch as well, which might equate to poor build quality to others, but on the second feel is quite sturdy and built well enough – no creaks anywhere. Another thing to note is the screen is underneath a layer of extremely tough Gorilla glass, which I think is more than enough for everyday abuse.

The rest of the unit is covered in a rubbery matte paint, which makes it its easier to grip. Quite a treat for those with sweaty and shaky hands, like me. The bottom houses the USB jack, the power/hold

The bottom houses the USB jack, the power/hold switch, and the headphone jack. I was a little bit iffy with the jack, as I prefer it to be on top of the player as opposed to the bottom but the presence of tactile bottoms on top of the player was a big plus, and perfect for blind operation. it practically has all the basic functions covered – prev/next track, play/pause and the volume rocker. I had no problems adjusting volume and skipping tracks with the S9 in my pocket.

If there’s one thing people would go ogling at the S9, it’s definitely the screen – 16 million colors in 3.3 inches of pure AMOLED goodness. colors are vibrant, blacks are deep and provide spectacular viewing angles. take that iPod. ;D

When I first turned on the S9, I wasn’t immediately impressed with the UI – it was mediocre at best, cluttered and uninspired. Ironically it was also one of the reasons why I bought the S9 – the incredible tweakability and customization. In fact the first thing that I did with it was to customize the UI and boy was it fun, in the end I settled for Claw’s Wallpaper UI which not only provided the additional tweaks i wanted but also gave me the opportunity to run alternative UIs as well.

Touch controls is provided by a capacitative touchscreen, same as the iTouch and the Sony X,  on the other hand  it isn’t the best out there, sometimes experiencing slight delays when switching from one menu to another, or when switching and clicking tracks and on-screen buttons, the Accelerometer  (which is aptly called the G Sensor) meanwhile allows the user to switch from landscape mode and vice versa, also suffers from this slight lag.

For this review I used the UM3X, unamped. I feel that this is the most proper can for this review, with the UM3X’s accuracy, neutrality, and excellent frequency response. Tracks used will be my usual audition tracks composed of vocals, rock, jazz, some Rap RnB and the obligatory Kpop in both 320 kbps mp3 and FLAC. I also updated the firmware to the latest release (2.50) which features better touch response, gapless playback support, among others.

Out of the box, the sound of the S9 was boring, flat and lifeless, like your usual family sedan on a trip to your grandparents on a sunday. However it was a positive note that the S9 has very good volume output – my nominal listening volumes are only up to 11 (out of 40) with the S9.

With BBE+ on the S9 becomes a different beast. I tuned my S9 with Flacvest’s EQ settings, albeit modified to my own preference. and the difference was immediately evident – there’s plenty of bass with good extension, mids are more prominent and have more sparkle, there’s also better high end extension while instrument separation and detail becomes more defined and there’s a significant increase in soundstage. with the BBE off and the EQ flat, it’s a mom car, but with all the enhancements blended together, the SQ is like a Porsche. 8)

With further fiddling of the audio enhancements of the S9, I found out that I can tune it to just about any sound characteristic I want –  I can increase bass even more, tune the soundstage to simulate a small room to a full size amphitheater, have my vocals on the back and emphasize the instruments ,among others, in fact methinks that the S9 is the tweak geek’s perfect DAP.

With the AMOLED display and generous screen real estate, the S9 not only becomes an excellent audio player, but is an equally good video player as well. With the AMOLED’s faster refresh rate, much more vibrant colors and exceptional viewing angles, watching videos are a definite treat. in, fact this review does not give justice to the video quality on the S9, it has to be seen to be believed.

The S9 supports 3rd party flash apps and games besides the preloaded utilities in the DAP (which includes a basic notepad and a calculator), the S9 community is quite active in producing apps and games for the S9, a plus for the S9 users.

Standard FM radio, but with the additional recording capability to WMA. haven’t really tinkered with this, so yeah. ;D

The S9’s bluetooth supports A2DP for music streamin through bluetooth earphones and speakers, I don’t have either so this feature is just a novelty to me. :)

Yes it also can.

TV Out, Line in recording

Sadly a purchase of separate cable is necessary, it would have been better if it was included in the package, but i may be asking too much :D

I would have to say that the S9 is indeed one of the top tier PMPs out there, with it’s impressive screen, multiple format support, exceptional sound and video quality and excellent user customization. If i have one gripe about this PMP, is that it lacks memory expandability. with regular firmware updates I still expect this player to deliver more.