Looks can be deceiving but the technology and inspiration behind the HD560s are quite different from the rest of the HD5XX line.

With an all-new 120Ω dynamic driver capable of reaching deep down to 6Hz and up to 38kHz, Sennheiser promises reference-grade sound similar to Wraith. The HD560s however takes its roots from the widely popular HD660s repackaged into a more cost-effective and single-ended only product.

One of the more obvious differentiations when looking inside the cups of the two headphones is the angled dynamic drivers on the HD560s.

Joining the historically rich HD5XX line, it is no surprise that Sennheiser only iterated on the design and comfort of their HD599 headphone by incorporating some cues from the HD660s.

So, even while the build uses more plastic than Wraith and the foam on the headband is glued, the 240g light HD560s has an easier time disappearing on the head when worn.

I encountered no problem with either headphone when checking for cup depth and dimension. Sure, the Wraith’s earpads are deeper, but the angled drivers on the HD560s ensure the transducers are also kept out of the way.

A globally known brand in the professional setting, Sennheiser knows a thing or two about monitoring gears. And since both headphones tackle this target, I was excited about how the budget-friendlier HD560s will fare.

Carrying over the thinner profile with guitars, steely tones on the HD560s are more engaging. The Wraith however pulls ahead of the HD560s in pulling up quieter details even though the latter makes the intention of instruments much more obvious.

One of the more immediate things that will tell apart the two is the farther vocal placement on the HD560s. The forwardness of the Wraith makes bigger images than the cozier space allowed by the other.

The treble region on the HD560s compared to the Wraith feels much more vivid and raw. Characters may be rougher around the edges but the upper zing of the HD560s produces a livelier violin solo.

The staging width between the two is a toss-up. While the HD560s offer a wider soundscape, images tend to stay far away so some finer effects and sound may be harder to detect.

Popular in the audio community for a variety of reasons, the LCD-X having launched way back in 2013 has built itself a reputation of being one of the top choices when looking for a studio monitor.

Each built with proprietary technologies like their Uniforce diaphragms and Fazor waveguides, Audeze’s claim to fame allows them to charge almost double that of the Wraith.

Extending well beyond Wraith’s capabilities on both ends of the spectrum, the LCD-X has a frequency range between 10Hz-50kHz. And it doesn’t take much to excite the 106mm drivers of the LCD-X with its more efficient 20Ω and 103dB rating. 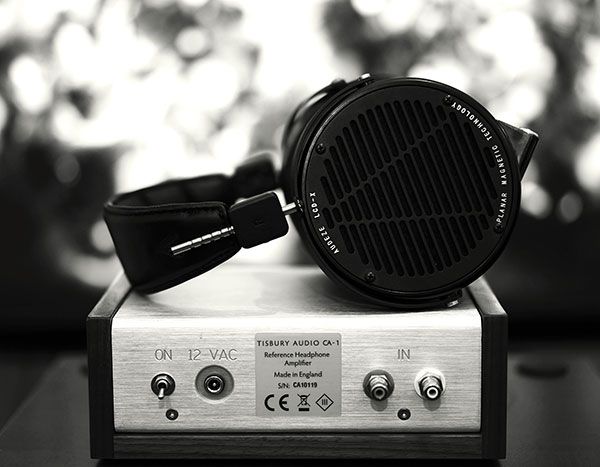 The Wraith is not the lightest headphone out there but it is nothing compared to the 612g chassis of the LCD-X. Aside from the huge round cups physically looking much bigger on the head, the latter also puts more strain on the neck with long listening sessions.

Like the Wraith, the clamp of the exposed spring steel is just enough but the weight does move the cups around, more so for being the heavier one.

Both incorporate a leather headband suspension system but Thieaudio affixed theirs with the adjusting mechanism of the Wraith whereas the LCD-X stays in place. Here, the perforated genuine leather used by Audeze feels much more supple and looks more premium.

The extension rods used on the LCD-X are directed outwards instead of inwards which allows only for minimal swivel. Finally, looking at the cups themselves, Audeze features their signature ‘A’ pattern screwed on four corners.

Audeze’s take on bass is closer to what I’d consider neutral. Not having the focus on the mid-bass, you get to enjoy the better resolution of the LCD-X in conjunction with its crisper and deeper rumble.

The LCD-X puts more life on singers but comes with a minor tendency of being nasal at times. Nonetheless, I’m sometimes reminded of the Wraith whenever a brighter melody comes and the upper midrange on the LCD-X similarly cuts back on energy.

Strings with the Wraith are not as lean and piano sounds are not as expansive brought by its weightier profile. This puts the placement of these instruments slightly farther when using the LCD-X.

For a change of pace, I listened to some live music and the LCD-X didn’t fail to capture the vivacity of the ambiance. Aside from being fuller sounding, layering was so precise that a more realistic audience was accomplished.

Not that bigger is always better but the extra $150 HarmonicDyne is asking will get you a larger custom 102mm nanocomposite planar diaphragm. Having that additional bit of driver size while less efficient at 64Ω offers a broader frequency range of 10Hz to 45kHz.

Where Thieaudio went deeper into fine-tuning their driver for an accurate pinna compensation, especially around the 1-3kHz range, the G200 is bolder in claiming its technical advancements.

Utilizing an isokinetic magnetic field from a high-density S+1 coil and double-sided high-pass magnetic tapes, the G200 claims THD reduction from the rapid vibration of the drivers.

The two headphones’ basic design is very similar with an adjustable suspension strap and 90-degree ear cup swivel. Stopping here with the similarities, other components are barely the same.

The headband of the G200 is bare carbon fiber showcasing the weaving of the material suggesting lightness. Continuing the arc to the sliding mechanism, the G200 has a more conventional design against the sharp inward curve of the Wraith.

There is no foam on the leather touching the top of the head for the Wraith while the G200 managed to squeeze in a few thin memory-foam blocks to help with comfort.

Confining the larger drivers of the G200 are circular ear cups that does add to its physical bulk. But at least to my preference, I like the ring guide the G200 uses to fit either of the two provided earpads as the much more robust and long-term solution.

Neither the G200 nor the Wraith offers a neutral and accurate representation of bass. Of the two though, the one adding more girth to kick drums and synths is the G200.

The numbers here aren’t simply for show, indeed the G200 is pushing for a more satisfying and filling rumble with the small drawback of getting a bit overwhelming at times.

It does, however, carry its weight when it comes to dynamics where it beats the Wraith with bite and clarity when listening to more delineated passages like the strumming of the bass guitar.

Passing on to the resonance and presence of a guitar string, the G200 will be appreciated by those looking for a thicker and darker sound. But those looking for more accuracy in midrange and tonal balance should look at the Wraith.

Simply put, treble-sensitive individuals won’t have an issue with the G200. Looking at how it offers more definition and top-end extension when it counts, it still leaves cymbals and horns somehow more blunted and less metallic.

With the tuning of the G200 as it is, a lively audience doing a round of applause will find a more realistic accommodation with the Wraith. The forward stage of the Wraith is also more evenly distributed against the more varied presence in the G200 that depends on the singer’s vocal characteristics.

A Phantom homage or not, the Thieaudio Wraith is a go-getter headphone that shines with its technical abilities and special tuning, ticking most of the important boxes.

Having infused some flavor to its target sound, Thieaudio has come up with a unique profile that should spice up a collection. Yet, I do think that if the presence of the recessed regions is improved to be more leveled and the bass is given tighter control, this device would be a lot more exciting.

Unsurprising but admittedly a bit steep at $549, it positions itself against a lot of the more popular planar releases in the same category. The pitch and technology are both laid out, the only missing component is for would-be buyers to appreciate what Thieaudio has done.