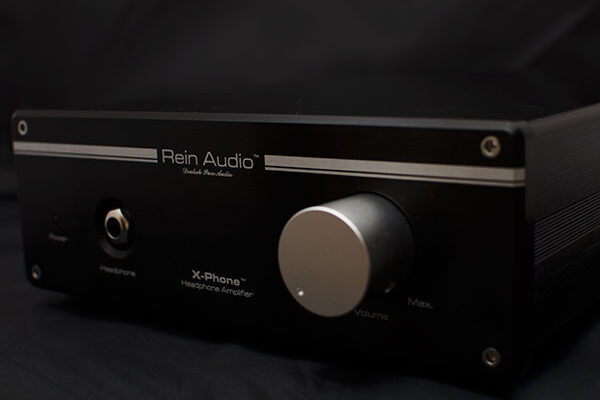 Rein Audio are relatively new to the audiophile market but have produced some well received products including the X-DAC which by all accounts was full of win but I have yet to try that one myself. For a while I just simply just gazed at the pics and hummed wishful thoughts. That was until Jason of Rein said, “hey try out the X-Phone headphone amp we just built.” Easiest yes I said in ages and frankly after listening to it now for a few weeks I can have no regrets. It will not be for everyone and those with low impedance headphones may not get the best out of them but some of the matches with this amp were really satisfying indeed and at $448 right now I think it is a pristine and well presented steal.

I am trying to get away these days from waffling on about the packaging things come in even though for some it is pretty relevant and a niche identifier. I thought I reached the limits of endurance as to what a brown box can do for my sense of purchasing satisfaction but actually Rein Audio’s X-Phone is one of the nicest headphone amp cases I have seen in the market to date. For those in the know it is very Asian in thought and design with a thin ribbon type elastic holder (gold colored) wrapped around a elongated stiffened black box with the logo smartly presented on top and a foam cut interior and a nice little dust protection bag and power cable. No RCA cables or extras in that way. Loved it, so did the customs guy though and charged me an extra $10 for import tax, he couldn’t believe it was the price that it was – naturally I coughed up after they stopped fondling it.

So what is the X-Phone?

Looking at Rein Audio’s road map of product delivery it was only a matter of time before something like a headphone amp was released. You have the DAC and the dedicated AMP so yup out comes an addition to one of the fastest growth areas in audio today – the headphone market. Speaking with Jason though I got a feeling that the X-Phone though had a target in mind when released and that was a dedicated headphone amp for higher impedance headphones. Certainly the rated 100 ohm output impedance on the amp itself lends credence to that suggestion. Great then but how will it handle the planer market? This is a growing market guys, and with superstars like the LCD-2 with a nominal impedance of 50 ohms but with a hungrier demand for power the match is going to be interesting. 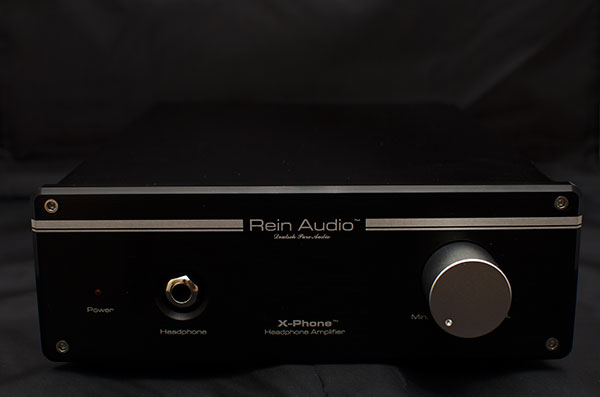 The secret is in the OP?

It was just blind luck I grabbed my trusty AKG K550 (32ohms) as my initial unit for the burn in process. Fast, articulate but very thin and a stack of unwanted sibilance on some female vocal tracks. Unforgiving? Maybe. Burning in and high impedance output? Most likely. Opamp? Aha now that was an interesting part two of my discussion with Rein on the amp.

After calming down the team’s initial panic that I didn’t like the amp and really just finding the right match I did ask what the Opamp was and the answer was a dual MC33078 setup instead of “everyone’s favorite” the OPA627 or such Opamp’s as the OPA2605 or the NE5532. Interesting choice because the MC33078 is not the most expensive Opamp in the world but has a very fast slew rate and clear signal that many would describe as clean, fast, expansive with a good sound stage but slightly lacking in impact and meat in the mid to lower range of the frequencies. My take on the tonality of the X-Phone as a whole doesn’t veer too far away from that interpretation to be honest.

Overall the X-Phone has a very pristine and clean presentation with some wonderfully detailed highs that sparkle without it ever being accused of being too hot or grating. The attack is fast and articulate but with a slightly thinned out midrange and a tight impactful bass that doesn’t sound in anyway bloated or boomy. The X-phone is built for speed and clarity with an added bonus of having a nice spacious sound stage.

The power on the X-Phone though not specifically designed for the planer market handles the planers pretty well though tops out with the HE6 giving a slightly leaner sound that is filled better with the likes of the Mjolnir’s 10w per channel. I found with the HE6 the dial was almost full tilt but a respectable level could be found around 2-3pm on the dial whereas the $750 Mjolnir does it all and balanced for around 12 noon on the pot or less with the HE6. Switch the Mjolnir to single ended though and the dials are much more similar. The same results for Hifiman’s EF5 little headphone bazooka tube amp which was pretty comfortable at around 12 noon for the HE6.

Comparing with the Audio-gd C-2C the C2C had a touch more juice single ended than the x-phone. The C2C ran at 1pm on the dial for the HE6 for similar volume levels at 4pm on the x-phone pot. I did find the C2C top end a little more muted and with slightly less sparkle than the X-Phone and a slightly smaller sound stage and not quite as detailed but these differences were subtle. The X-phone though handled the LCD-2 V2 pretty easily as also the HE400 and most high impedance headphones such as the T1 and the HD800 without too much effort or strain. So the X-Phone really isn’t going to win awards for power hungry planers such as the HE6 but its no slouch with pretty much everything else. It really is just a question of matching to your own preferences. 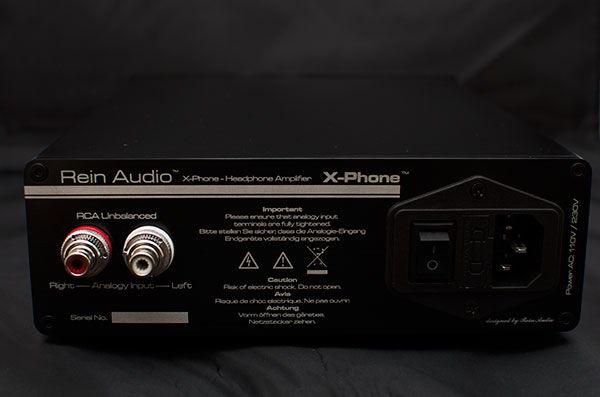 Its not a warm amp or a thick analog sounding amp and the bass is very well controlled giving a sense of spaciousness without loosing what I think is a more analytical solid state sound than a warm bass heavy musical sound. The treble is very fast and articulate and worked quite well with the LCD-2 v2 without loosing that wondeful natural flowing presentation that so many LCD-2 fans go for but not so well with the more humble AKG K550. The AKG K550 really does need tubes or a warm signature such as the Just Audio UHA-120 to thrive or else the treble will burn too hot for quite a lot of genres. So it was with the X-Phone for my personal taste leaving the mids far too thin and the highs with too much heat and sibilance.

Given Rein Audio’s previous statement that the better matching will lay with higher impedance headphones and that 100ohm output stage reaching for the T1 and the HD800 seems the next logical direction. Paired with the X-Phone the Beyer T1 was never going to loose was some might describe its sparky top end but I did find the presentation to be never too hot and the bottom end very well extended tight and well controlled. The T1 is any headphone best demonstrated what the X-Phone is all about – a neutral top down engineered audio tonality that is clean and fast but bites in the lower end when required. The mids on the T1 are not the thickest with the X-Phone but it doesn’t lack detail thankfully. Nothing is claustrophobic or muddy in that sense and the T1 is a good headphone to capitalize on that strength. I do wish though in the end though there was a tad less fizz in the top end with the T1 and the X-Phone combo such as what I got with the LCD2 rev 2.

Surprisingly for me I loved the HD800 and X-Phone pairing for acoustic and classical genres. Just perfect. The detail and clarity was excellent and the top end fizz inherent in the T1 seemed far less prominent on the HD800 which I didn’t expect at all. The X-phone and HD800 combo on Max Richter’s re-composition of Vivaldi’s Four Seasons was incredibly articulate and involving with no loss of that huge sound stage the HD800 is famous for. There is something about that bass extension also on the x-phone that performs so well. Its not thick and heavy but it hits hard when it needs to even on the HD800.

When I first picked up the X-Phone I really wasn’t too sure but with careful matching I really grew to admire the X-phone strengths as a frighteningly accurate, clear and fast headphone amp. It’s presentation is top notch and the current price right now is very appealing indeed. The higher impedance output does mean though that you need to think about which headphone works best combined with that cleaner tonality and for me matching with headphones that are not inherently bright perhaps even dark such as the Senn HD650, the Hifiman HE400 and the LCD-2 rev 2 are going to give better results. I still can’t believe though how enjoyable I found the matching with the HD800 for my nerd music – did you guys tune with the HD800 as a reference at any point in the process? Most curious indeed.