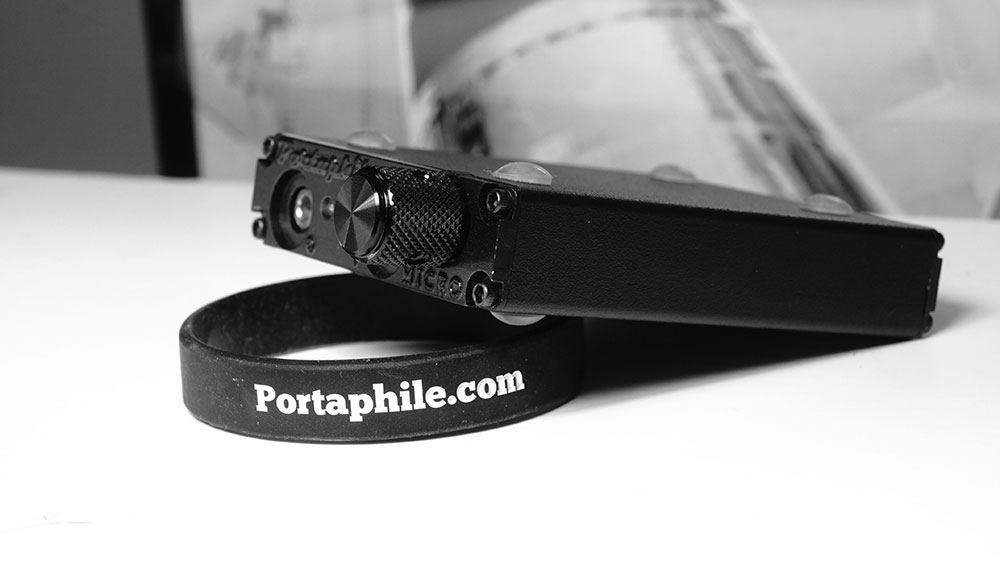 The Micro Portable Amp By Portaphile

Ceasar over at Portaphile has been up to no good!

A while back, I’d heard his original 627 portable amp, astounded by the price to performance I’d naturally wanted to own it and review it.  Since then, Portaphile has released a revision called the Micro at $499.

Portable goodness that satisfies the wallet and the senses…yummy.

All of Ceasar’s amplifiers use roughly the same foundation, three opamps and two buffers per channel.  This Micro is a smaller version of the original 627 ( OPA627AU, respectively  ).  He’s mentioned that he added in the option of a DIP Chip so that he can swap in different opamps ( the MUSES01 and 02 ), as well as the additional charging ability via a standard USB input, where the original 627 only offered a DC charging function.  The only real differences between the famed 627 and this Micro are the batteries, which in turn allowed for a smaller chassis in the Micro version.  Ceasar told me the Micro and the 627 are essentially the same in performance.  The original 627 uses larger TKD potentiometer, the smaller Micro uses an ALPS potentiometer. All three of his portable amplifiers use 6 Burr Brown BU-F634’s ( 2 per channel ) that buffer the OPA627AUs.  This equates to a pristine sound signature that is user-friendly with regard to rig source pairing.  It isn’t at all picky with what is connected to it as a source.

Ceasar says he specifically forged his creations to work around the OPA627.  For reference, Fiio’s X3 uses the AD8397 opamp, which is a downgrade to the OPA627, so you should have a solid idea of the level of performance the Portaphile amps are capable of.  In it’s own right, the 8397 is a great chip, one that is bested by the A627 in my direct comparisons with other rigs during this review.  I confirmed the Portaphile Micro offered a superior sound.  I started my A/B of the Micro fed by the Sony A17, which sounds identical to Fiio’s X3  ( sadly, I have no idea what the opamp configuration is for the Sony A17, when I reviewed that I had the Fiio X3 on loan and I failed the blind testing in being able to differentiate the two. ).  In turn, the Portaphile Micro fed by the Fiio X3 and the Sony A17 had shown a very noticeable increase in dynamics and sound quality from top to bottom.  When the Portaphile Micro was sourced by the X5, I passed every blind test with 100% accuracy and was able to easily spot which rig had the best clarity of the bunch:  The Portaphile won, to say the least.  As good as my Fiio E12 is + X3 (  OPA1611 and LME49600 ) it was noticeably more grainy and far more claustrophobic than Ceasars Micro.  This is just a way of me saying the Portaphile is really damned great.  It was able to pair with a very good midtier portable Dap and still outperform it, increasing the sound quality noticeably with it in the pairing.  Hard to believe since this amp is only $499 and has such a insane amount of output power as well.

The OPA627 is quite finicky and requires 18v pp to top it off, it is a very hungry amp ( But more on why this is awesome later in the review ).  Ceasar said he implemented a voltage boost circuit to achieve the needed power, it was “carefully designed to make sure it wouldn’t add any noise to the circuitry”.  He made sure to include a wall-usb charger as well as a standard mini usb cable for charging needs.  This guy loves his products and designed it from the ground up, instead of just tossing parts in that don’t make sense.  Don’t want to name names, but there are more than a few portable amplifier makers that really don’t invest time into the actual sound qualities provided, or that have a pre-designed sound in their heads that they need to strive to achieve with parts selection.  This is immensely hard stuff and when I hear that a designer actually wanted X sound and spent time to achieve it, I feel like an award is required. I need to give this guy credit and my money because of the immense stress that I would assume is involved, as well as the ridiculous time and experience needed in R&D.  You’d need a daunting level of experience with opamps to actually design something specific like this and you would be surprised as to just how few amplifiers and dacs designers specifically compiled parts to sound this or that way.  This is one of the most challenging things to do when it comes to headphone amplifier construction.  Ceasar is one of maybe 3 others in my entire 15 year trek through portable Audiophile Land to ever tell me he “Specifically” designed something to sound a certain way.  Massive props, sir.  Massive.

He also mentioned that the battery will likely not degrade over time because of the design and that the experience will remain stable for the duration of the battery’s life time.  Here is a quote from him that explains this, as I am no expert with voltage bias in portable applications like this:

“Amplfiers that are powered straight from the battery will start out at around 4Vs (full battery) then as the battery drains the voltage will drop to 3.2V given you lower voltage supply.  Even amplifiers that use higher voltage batteries such as some that use 18Vs and power the circuitry directly will experience this.   Performance will be optimal at full battery and drop while the battery drains.   Use of the voltage boost allows my amp’s performance to remain constant throughout the life of the battery by seeing a constant voltage until the battery is fully drained. The amplifiers can also correctly drive low impedance headphones.  While high impedance headphones need higher voltage, low impedance headphones need more current.  To meet this demand, each channel has 2 buffers per channel so that they can provide enough current. “ 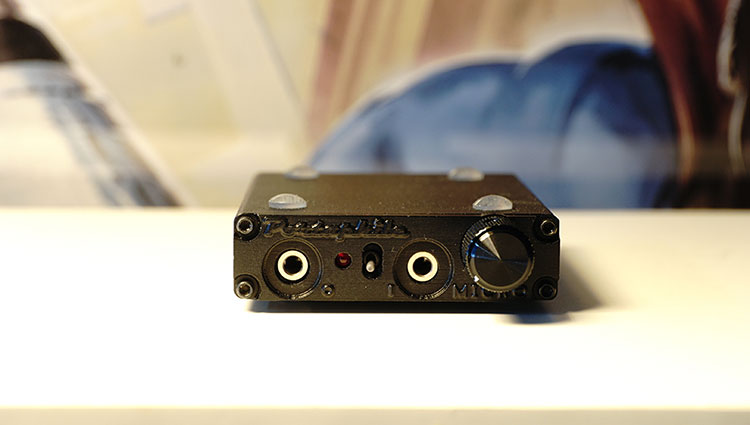 He also made sure to design the exterior plates to stand the unit on attention without tipping over or scuffing the lettering.  This is pretty neat and something I think I’ve neglected to notice in all portable amplifier or dap reviews in my past:  Flush bottom plates take damage often, but if there were raised edges or in this case screws with the Micro that were in turn flush and flat with the surface, no damage will take on the shell of the product.  All the damage likeliness will be taken by the screws, which are easily replaceable and don’t devalue resale if you buy or sell used.  Another thing I noticed was the Gain switch having the most gently raised head over the flat top plate near the volume knob.  I’ve had issues with those little knobs on other models from various companies that insist on using a very thin, but elongated switch for powering the device on, or perhaps the gain switching.  There is no reason for this and it is a huge pet peeve of mine.  Thankfully, Ceasar designed the little gain switch to be raised ever so slightly so that it doesn’t intrude or catch on anything, that along with recessed input and output 3.5mm jacks on the same top panel make me very happy.  I have a lot of pet peeves with design, like bad headband design and such, but one of the biggest I have is when portable amp makers put the input and output jacks on opposite sides of the product…the rage inside me boils over and my eye blood vessels pop, my family puts hard hats on and goes on vacation for a few days until I cool down.  I am so happy that Ceasar kept things simple and elegant. Headphone in and out next to each other..such a simple and logical thing that goes neglected by nearly everyone else who makes portable amplifiers or dacs.

The exterior plates were machined and the Portaphile text logo is embossed onto the chassis itself, not printed.  Ceasar machined all of this himself in house, then sends the plates out to a 3rd party for anodizing.  He said each faceplate takes 3-4 hours to craft, that combined with the time needed for anodizing is the reason his orders may take some time to complete.  This product just became art, handcrafted inside and out, as well as with regard to the compilation of circuitry inside.  It is also almost the same size as the SR71B from Ray Samuels, carrying a hefty weight to it that really screams high quality materials inside.  One thing I wanted to touch on briefly about the design is the volume knob.  I am not sure how he did it, but Ceasar made liquid sex with the volume knob in the form of hardware.  I find myself just toggling it left and right for no good reason, it is super slick and extremely tactile with perfect resistance, never sticks and always lets the user raise and dip volume with extreme accuracy.  The SR71B feels like junk with the volume knob experience, most amplifiers I’ve come across don’t feel like they offer a floating knob head like this, almost zero-g in tactility on the Micro.  It is really cool.