The Sony IER-Z1R is the company’s latest top of the line hybrid universal monitor featuring a dual DD and single BA design. It retails for $1,999.99.

Disclaimer: The Sony IER-Z1R sent to us is a loan sample in exchange for our honest opinion and will be returned after this review to Sony Philippines. We thank the team at Sony Philippines for giving us this opportunity.

To read more about Sony products we reviewed on Headfonics click here.

2018 was a busy year for Sony as they have made huge strides in adding to their integrated audiophile offerings through the expansion of their One Sound Signature Series which includes the DAP DMP-Z1, a headphone in the form of the MDR-Z7M2 as well as three IEMs particularly the IER-M7, IER-M9, and the IER-Z1R.

In this review, we take an in-depth listen to the flagship IEM from the One Sound Signature Series which is the IER-Z1R, a dual dynamic driver and single BA hybrid IEM setup.

Sporting dual dynamic drivers was a fad say 3 or 4 years ago and I thought this was rather a thing of the past. In today’s audiophile world currently being taken over by manufacturers developing electrostatic driver hybrid setups dual, dynamic drivers may be antiqued.

Sony, however, didn’t abandon the technology and instead built around it by making their iteration and adding a balanced armature in the mix for a more refined sound. It will be interesting to know how the flagship IEM from their One Sound Signature Series fairs with other hybrid driver designs currently offered in the market today.

Sony claims that they have tuned the IER-Z1R with one thing in mind, to provide a natural sound that is able to evoke the emotions as well as reveal the smallest of details of your music. They have also used the 5mm dynamic driver as super tweeter which Sony claims to produce up to 100 kHz.

Additionally, they have also utilized a specific technology that acts as a crossover to avoid any unwanted incoherence from the drivers as well as a tubing system that allows the IER-Z1R to belt out a balanced natural sound with a wide sound stage.

Sony has stuck some pretty intricate technology inside the IER-Z1R starting off with its 12mm dynamic driver which makes use of a magnesium dome with a liquid crystal polymer (LCP) diaphragm. This driver handles the lows and the midrange of the IER-Z1R. Sony also utilized a proprietary balanced armature driver to take care of its treble. Handling the role of the super tweeter is the 5mm dynamic driver which sports an aluminum-coated LCP diaphragm.

To avoid the incoherence usually suffered by hybrid driver setup in IEMs, Sony implemented the Refined-phase Structure which prioritizes the alignment of sound waves through carefully-adjusted sound paths. Part of this structure is the magnesium inner housing for the drivers which is built for eliminating resonance which could add some coloration to the sound.

Additionally, they have also developed the Sound Space Control technology, an acoustic tubing system which aims to provide big soundstage as well as a natural and balanced sound. This technology consists of an acoustic tube which allows the sound to travel through an extended acoustic cavity that in turn evokes a wide soundstage. 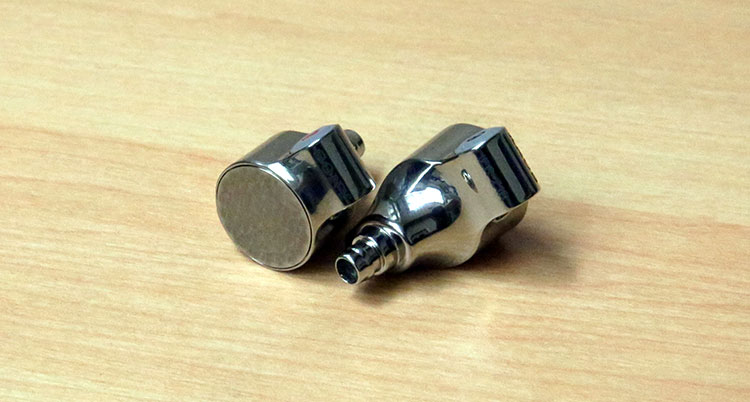 Housing the drivers is a zirconium alloy shell that sports a nice ergonomic fit. Its faceplate is adorned with an attractive perlage patter design and if you take a peek on it when it’s still stored in the box sans the cable you’d easily mistake it for a pair of earrings since the perlage pattern on the faceplate makes it look like a piece of jewelry. The IER-Z1R is easily an eye candy especially for those who would prefer a luxurious look.

I’d say that IER-Z1R is solidly built and I don’t see the internals having any issues should the IEM fall off or suffer any impact due to the sturdy shell. There may be a seam around the shell but I don’t see how the IEM could be pried open should it suffer any impact from falling. It does leave marks of your fingerprints when you touch especially on the inner part of the shell but this for me is not an issue at all since after since you’d also be provided with a cleaning cloth which could pretty much bring back the sheen of the IEM. 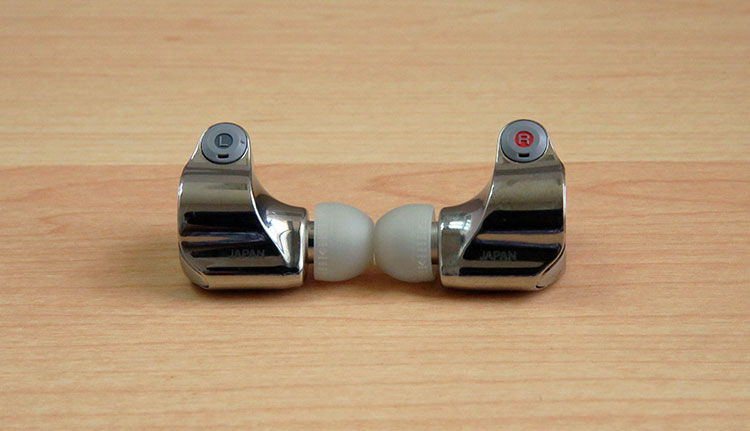 The shell, however, is on the heavier side but due to a deep fit in the ear canal, its weight could be offset for a more comfortable fit. Without the tips, you’d think that the nozzle are quite short and fitting would be an issue. But once you use either the hybrid or triple comfort tips, you’d be surprised how good comfort and isolation is.

The fit is deep and both the hybrid and triple comfort tips can be used for extended listening sessions. There are not many sharp edges on its shell to make the fit unbearable. It also doesn’t have that bubble for the concha which you could get from acrylic customs or semi-customs. But for me, it’s just right that Sony chose to abandon that design since IER-Z1R’s rounded fit is already very comfortable. 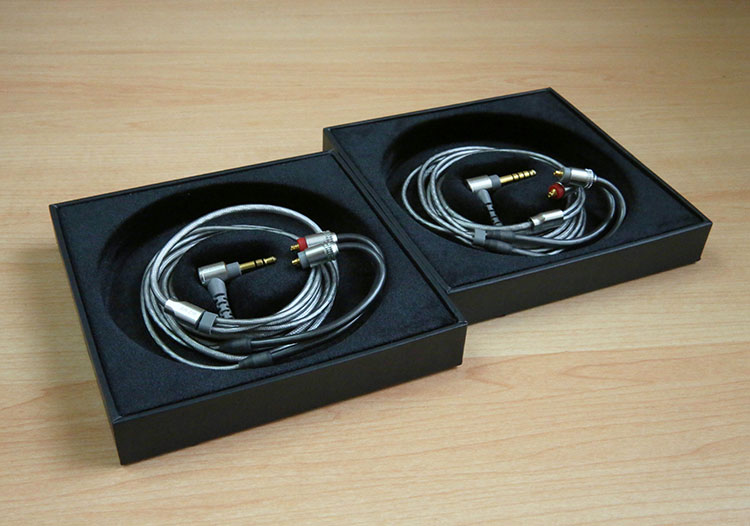 The IER-Z1R utilizes two MMCX silver-plated oxygen-free copper cables inclusive of the L-shaped 3.5mm single-ended and the L-shaped 4.4mm balanced terminations with both plugs making use of non-magnetic gold plating. Securing the internals of the cable are the braided silk insulator as well as a pliable plastic shielding. The plug, on the other hand, is secured with a plastic shielding as well as a strain relief for some added durability for the wire.

A small aluminum mold is used for the splitter to keep the cable lightweight. There is also a chin slider which could be pulled up until the strain relief that separates the wire and the ear hooks.

As for its looks, the silk braid insulation provides an attractive sheen to its overall look while the alloy splitter and connectors complement the shiny look of the overall design. The alloy mold for the MMCX connector, meanwhile, sports a nice-looking groove which also adds to the aesthetics.

The socket, for its part, is recessed which allows for a more secure connection for the stock cable. Be wary of using aftermarket cables though since other manufacturers include some sort of shrink tube or other protective layerings on the barrel of the connector which would result in fitting issues on the recessed socket. 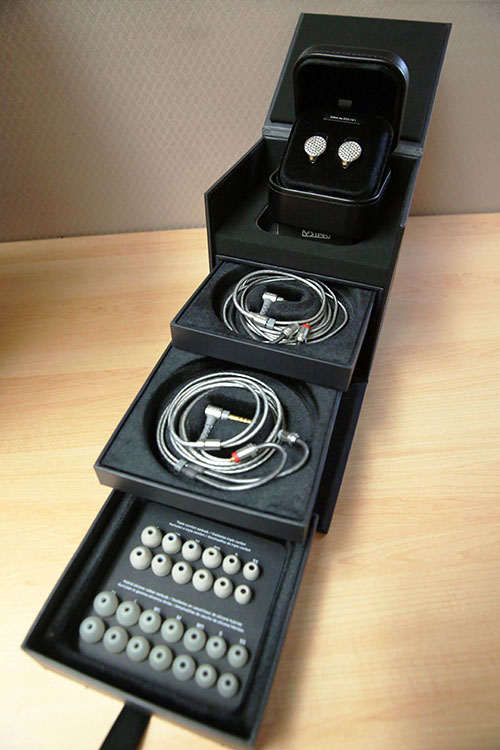 The IER-Z1R would be perhaps one of the most enjoyable unboxing experiences that I have encountered. If I were to describe the experience, it could be summed up in one phrase — a jewelry box.

The box is covered with cardboard that bears the brand and the model of the unit. Slide the cardboard sideways and you’ll be greeted by what would seem as a jewelry box. Lifting the top lid exposes you to another box which contains the IEM while the front lid of the box then opens up exposing the “drawers” containing other accessories. The box of the IEM has an elegant design to it which is accentuated by the leather case and the soft and smooth textile that lies across its interior. Inside are the monitors that sit on a mold and below it is a cable organizer and a cleaning cloth.

Under the section where the leather case for the IEM sits are three drawers. Pulling out the first drawer, you’ll find the cable with the 3.5mm termination and inside the second drawer is another cable this time, on 4.4mm termination. 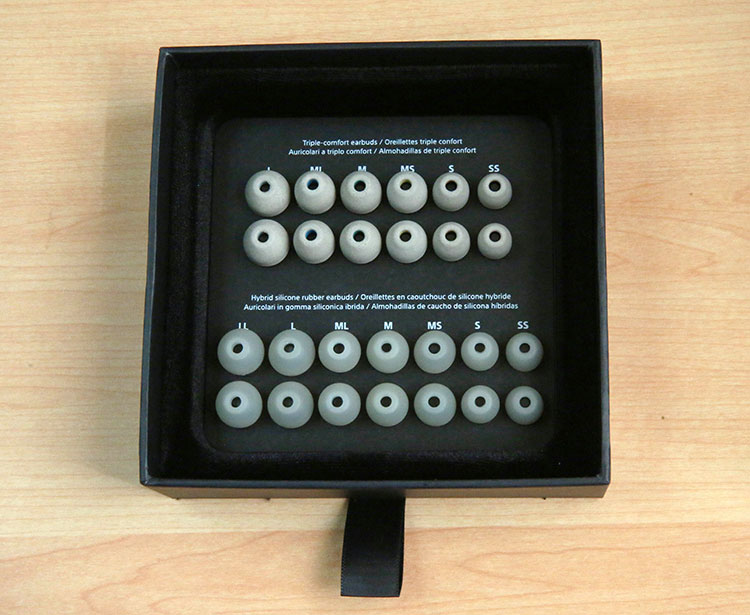 In the bottommost drawer are two sets of tips of various sizes (SS, S, MS, M, ML, L) namely the triple comfort and the hybrid silicone. The clear variant of the hybrids that are included in the package I think are exclusive to the IER-Z1R since the common Sony hybrids that I have seen by far are those with black tips and stems that are color-coded according to size.

The triple comfort, on the other hand, makes use of soft memory foam. Both tips are very comfortable but I will discuss more about how the two types of tips would sound later in the impressions.

In a nutshell, the packaging is simply premium while Sony is extra generous in throwing in a lot of accessories for their flagship monitor this time around especially with the inclusion of two cables as well as two set of tips. Sony leaves no stone unturned in providing a premium feel to their packaging as they also gave attention to some tiny details like the box and the drawers wherein the interior of each section is layered with black cloth.