We just reviewed the Ether 2 a few weeks ago and it is a fantastic reimagining of the Ether line by MrSpeakers. It is somewhat cheaper than the Empyrean, $1000 less actually and it does differ in quite a few areas.

The Ether 2 is a single-sided magnet design using their patented TrueFlow and V-Planar tech and a more regular planar diaphragm shape rather than a hybrid isodynamic array found inside the Empyrean. This combined with the much smaller form factor and build aspects such as the Nitinol headband make the Ether 2 a much lighter headphone at 290g compared to the Empyrean’s 430g.

However, I find the long-term listening comfort of the ovoid cup and deeper more open pad design of the Empyrean to be on par for comfort. The curved leather strap also dissipates pressure just as well as the Ether 2. The larger internal opening and deeper pads also deliver a higher level of comfort against lateral pressure. I believe MrSpeakers will be offering new bigger pads to offsets the closeness of the existing pads so I am interested to see how that affects the experience. 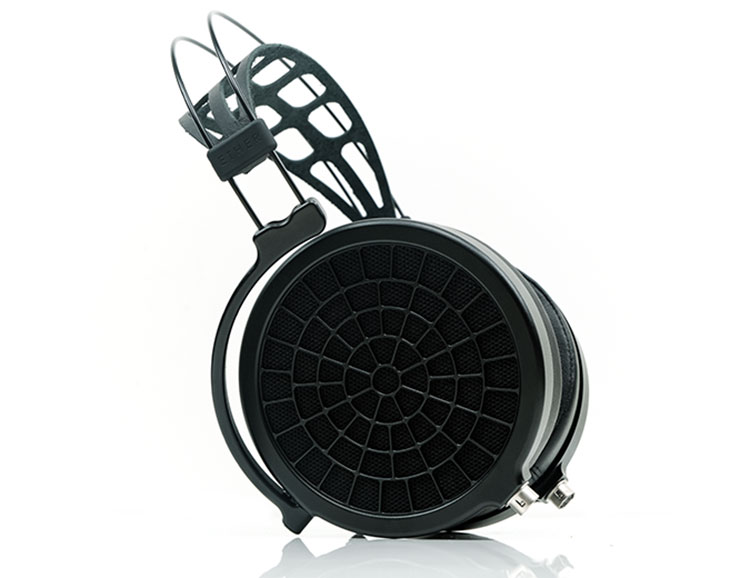 The Ether 2 is rated at 16Ω and around 92-94dB in our previous testing. Compared to the Empyrean’s 31.6Ω and an SPL of 101dB is it the slightly harder of the two to drive. We tested both with an Oppo Sonica/ Xi Audio Formula S in single-ended format and a Gungnir/Mjolnir combo using the balanced 1.2M 4-pin Furukawa PCUHD XLR option and in both setups, we found ourselves pushing up the volume by around 10-15% for the Ether 2.

If you are planning on going portable then you do need decent current and voltage for both. DAPs such as the Lotoo PAW Gold Touch and Cayin’s N8 as well as iBasso’s DX200 with Amp 1 or Amp 8 are our recommendations. Here we found the Empyrean to require less current than the Ether 2 and could be run at lower volumes though both did require high gain settings on the Lotoo’s 0.5W output.

The linear bass performance on both is impressive and very neutral to my ears in terms of positioning up to around 1k. If anything, the Ether 2 has a gentler sub-bass bias than the razor-flat Empyrean low-end with the leather pads. With the Alcantara pads, you get a bit more depth and warmth to the Empyrean low-end.

From 1k onwards they go in opposite directions, crudely speaking, with the Empyrean elevating markedly for from 2k into the upper mids and lower-treble and the Ether 2 dropping down in amplitude from 2-4k. From there the Empyrean starts to slowly drop to the 10k marker with a slight-bit of roll off whereas the Ether 2 gains a bit more elevation around the 8k marker.

Vocals and especially percussion presence on the leather pad Empyrean sound a little more forward and realistic than the Ether 2’s slightly warmer and more euphonic-sounding mids and lower treble signature. If anything, the Empyrean mid-range is a little more lively or vivid of the two because of that little tilt forward with the leather pads.

With the Empyrean Alcantara pads, vocals drop back a touch and staging becomes more expansive than the Ether 2. However, percussion timbre becomes a little leaner on the Alcantara pads compared to the Ether 2. For this matchup, I would take the leather pad Empyrean as the more impressive alternative when pitted against the Ether 2.

This is Final’s flagship headphone, a semi-open planar magnetic full-sized circumaural headphone weighing in at a hefty 523g compared to the 430g of the Empyrean. The D8000 is a more traditional circular headphone design with a hint of retro using the Yamaha HP-1 as its design inspiration. Compared to the Empyrean the design is more industrial than opulent but still quite high quality.

Be of no doubt, the fit of the Achilles heel of the D8000 is magnified here when compared to the Empyrean’s superbly balanced levels of comfort and deep pads. The D8000 headband is simply too long, the pads, comfy as they are, cannot support the vertical pressure and reduced contact point at the top of the head. Larger heads may disagree on the D8000 headband length but I suspect larger heads will also find the Empyrean the more comfortable fit of the two.

The Final D8000 is rated at 60Ω with an SPL rating of 98dB. Compared to the Empyrean’s 31.6Ω and 101dB there was little if any difference in terms of dynamic range. This particular comparison was done with the Auris HA-2SE tube amp with a 50Ω setting and the XI Audio Formula S.

Volume levels also were almost the same on both amps though the weightier low-end of the D8000 might give a perception of more power compared to the more neutral Empyrean (leather) sound.

Both the Empyrean and D8000 sound very good indeed from the Cayin N8 and LPGT DAPs, two DAPs with more than decent output power. You will hear a bit more low-end weight on these pairings form the D8000 but that’s simply down to how the D8000 is tuned rather than any driving issues. 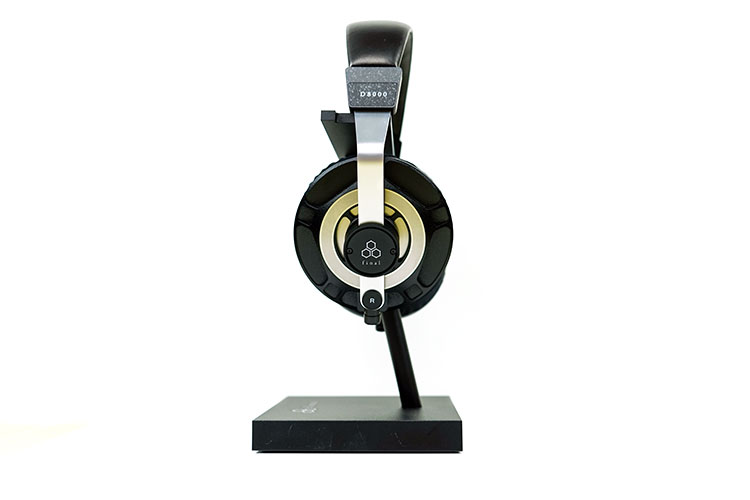 Depending on the pads you use there are a number of differences between these two flagship headphones. The first is the low-end emphasis. The D8000 low-end is not as flat nor as linear as the Empyrean bass performance. There is a degree more sub-to-mid bass emphasis with a slight drop into the lower mids up and a subtle rise again to 1k.

The Empyrean is much more linear and neutral in its tuning up to 1k by comparison, especially with the leather pads. It does get a degree more warmth and body with the Alcantara pads but it still will not impact as hard as the D8000 sub-100Hz.

Mids are quite contrasting on the two headphones. The D8000 dips around 2-4k which is a fairly normal response curve for a lot of planar headphones. Not so with the Empyrean which pays closer heed to the Harmon Target with an elevated rise from 2-4k. In fact, its peak amplitude is around 4k across the entire FR.

This leads us to the other key difference with their timbre. The D8000 has more treble emphasis from 6k onwards and sounds the airier and more extended of the two with a bit more sparkle. This does affect the timber between the two in different ways.

On a general level, I have a preference for the smoothness of the Empyrean voicing for female vocals, they have less of an edge than the D8000 for artists such as Anette Olzon whose range can go pretty high when needed.

The more forward treble on the D8000 injects a little more odd-harmonic presence that gives it that slightly edgier harder sound which can work well for string timbre but less so for vocals. Percussion will sound the brighter and snappier of the two on the D8000 and smoother with more body on the Empyrean.

You can argue that on the balance of things the D8000 is the more musical and fun sounding with the more contrasting bass and treble of the two and the Empyrean is a little more coherent and on the smoother side of things.

It is still early days with us on the Diana Phi so take some of our impressions here as fairly initial than final. What I can say is that both are exemplary builds but with very different purposing. The Empyrean is luxuriant, almost opulent whereas the Diana Phi is funkier, with a definite 70’s retro aesthetic. Both are beautifully engineered and perhaps the most impressive designs I have seen to date.

They are, however, so different in size, handling and also for fitting. The Empyrean is very much a desktop experience whereas the smaller Diana Phi has more of a portability look and feel. The Diana Phi is the lighter and more compact of the two at 350g compared to Empyrean 430g.

In the hand, the Diana Phi feels the more discreet of the two. On the head, however, the pressure balance on the Empyrean is the better of the two. The deeper pads and curved leather strap takes away that central contact point on the top of the head and places less vertical downward pressure on the ears.

On the Diana Phi, there is a lack of memory foam in the headband so you can feel that contact point a little more on the top of your head. There is also a bit more side clamping and a longer headband on the Diana Phi. This makes it a bit more ‘fiddly’ for a sweet spot on my head. 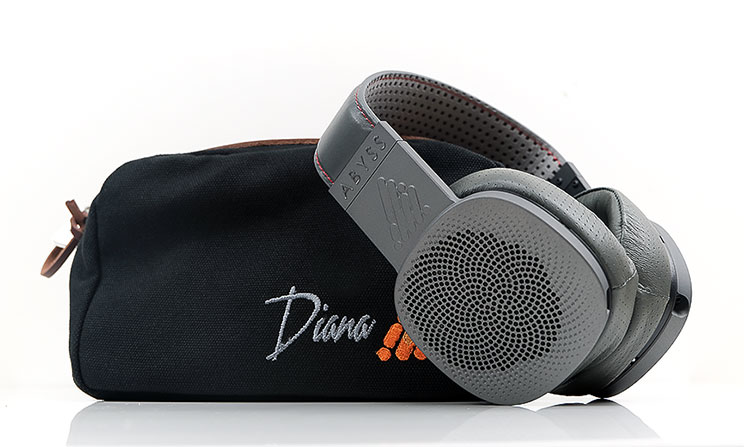 The Diana Phi is no high sensitivity portable headphone though. It is rated at 32Ω but just 91dB SPL. Compared to the Empyrean at 31.6Ω and 101dB and you can quickly see that the Diana Phi needs a lot more current than the Empyrean.

On all the amps we tested these two with (Formula S, Auris HA-2SE, and the Schiit Mjolnir) we found a significant difference in volume settings with the Diana Phi significantly higher volume than the more efficient Empyrean.

I still think you can get decent performances on powerful DAPs with the Diana Phi but it will require a lot more juice. Watch synergy though, our initial impressions are that the Diana Phi loves a smoother warmer sound from the likes of the punchy N8 over the cleaner reference LPGT.

Like the Empyrean it seems to have a fairly flat and very coherent sounding low-end but with perhaps a little less body. It does respond ever so well when required and there is no doubt I can pick up a very well defined sub-bass presence on the Diana Phi. However, its main focus seems to be much more on delivering incredible levels of speed and articulation.

I guess the use of the Abyss-Phi drivers will give it that type of presentation since I tended to find the Abyss to be incredibly fast and light on its feet for a planar headphone when last I heard it.

Vocals on the Empyrean have a little more focus and sound the more forward of the two. The Diana Phi seems more neutral to my ears, especially when instrumental passages get quite energetic and complex. 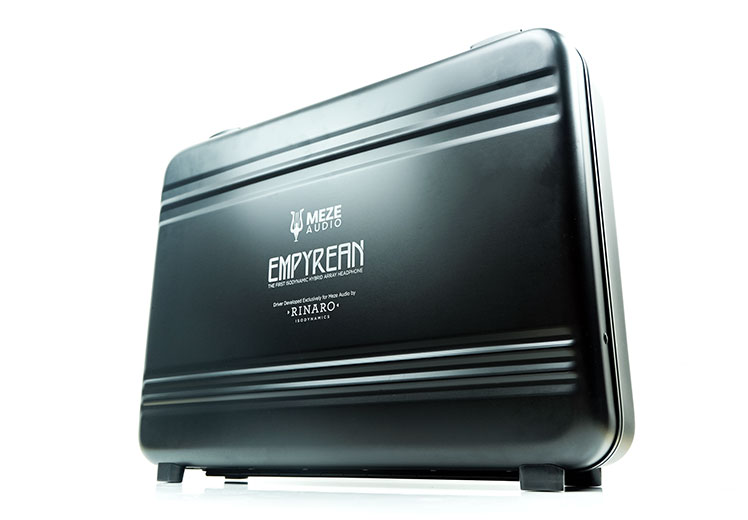 The Empyrean is wonderfully different from a great many planar headphones out there in the market today. It has a tuning that is both masterful in its subtleties to warrant being termed as a “connoisseurs’ choice’ yet pleasingly musical enough for just about anyone to pick it up and simply enjoy it with just about any genre. I honestly cannot fault its performance from a personal ‘vocal loving level’ and from an objective technical level.

There is a wide range of audiophiles out there with an increasingly diverse level of source and amp these days. In a way, the Empyrean tuning and power needs reflect that level of diversity. I love that it doesn’t require huge power but my, it sounds beautiful with great amps, as any great headphone should aspire to do. The fact it has enough flexibility to sound excellent with very good portable sources also is the icing on the cake.

The Empyrean is a beautiful looking headphone with an endearing tuning quality that I think will appeal to both the hardcore and casual alike. It really is amazing that previously with Meze we were talking about cracking little mid-fi portable headphones and now this. Mighty oaks from little acorns grow as they say.