Our review today covers the new HiBy W5, which is a wireless Bluetooth dongle designed to be attached to IEMs and pair with sources such as LDAC. It is priced at an SRP of $109.

Disclaimer: The HiBy W5 was sent to us as a sample in exchange for our honest opinion. We thank HiBy Music for this opportunity.

To learn more about HiBy product reviews on Headfonics you can click here.

HiBy W5 Review
The HiBy W5 is quite advanced for today's BT audio market with the highest ever BT sampling rate in a futuristic but quirky design.
Slide here to add your score on the gear!22 Votes
7.9
7.9
Reader's Score
$109
HiBy Music

LDAC, AptXHD, HWA. All fancy high transmitting rate codecs and supporting hardware that has sprouted since 2017.

HiBy, who created the HiBy Music app and several popular DAPs including the R3 and R6 Pro just announced the W5 Bluetooth receiver. Not just any BT receiver but one which claims to outperform existing competitors featuring a groundbreaking new codec.

The UAT codec newly developed by HiBy transmits a maximum 1.2Mbps (LDAC is maxed at 990 kbps) audio signals from an Android Phone/Device to the W5 delivering 20%+ more signal content with up to 192kHz sampling frequency (normally below 96kHz).

Based on the CSR8675 Bluetooth 5.0 chipset, HiBy has further pushed wireless transmission’s boundaries. This allows studio-quality tracks to be replayed at a higher rate than ever before, a big leap on paper!

With an up-to-date ESS SABRE ES9218P DAC onboard boosting 1.6Vrms output we are expecting decent power from the W5’s output. While enhanced bit rate is definitely welcomed, we have to take compression, connection stability, tuning, and quality of the amping stage into account. Amping is still an important part of the equation.

The W5 comes in clear PVC packaging with the receiver unit displayed. Inside, you will find the receiver unit with a dual-tone pebble stone design and a glossy semi-transparent plastic top with a ring shape LED indicator below.

The other side of the receiver body is made from stainless steel in a subtle brushed finish. You also get a charging cradle and the corresponding charging cable with a USB-C connector and a user manual.

The design looks very sleek and simple with a clip underneath which you can remove. A charging cradle tags along with indicators showing how much power is left much like a power bank dedicated for the W5.

You may find the cradle lid a bit tight in the beginning but it will loosen up after some time. The combo is easy to carry around and even takes the receiver for a jog without feeling too much additional weight.

To power on the device, you have to press and hold the upper area of the black side until the unit vibrates. It is advertised with haptic feedback and a clean interface however, I am not a fan of the touch controls. Physical volume buttons will still be handier when using gloves for example.

It is still easy to adapt to the control functions on W5, in occasions like taking a phone call you just need to press the touch-sensitive button or hold it to reject the call. The lack of buttons does make the W5 look futuristic and cooler than most Bluetooth devices in the market.

The bright side of having no physical buttons is the element-proof nature of the W5 with IP67 certification. Raindrops and spilled drinks will carry no fear for the W5.

The W5 is also integrated with 8th generation Clear Voice Capture algorithms. This is a technology designed to reduce echoes and enhance clarity when making calls. During our test calls on our Telegram app when out and about in the town we found it is quite clear and loud as advertised.

With the W5, LDAC receiving or the maximum bitrate and sampling rate is possible on HiBy’s DAPs as well as several other Android devices using the HiByMusic App. You will need Oreo to take full advantage as well as Bluetooth 5.0 hardware though both are almost ubiquitous in the market today.

The level of interaction on the W5 is still at its early stages though. You can access most features via the HiBy Music app but it will not be fully functional until the final launch date so apologies for not being able to give you a full rundown of its features in this review.

You will be able to review the W5 sampling frequency, its Bluetooth format, battery status, and volume level as well as upgrade the firmware in the HiBy Music app when it is finalized for public purchase.

Aside from UAT, other common codecs available on the W5 include the following:

W5 will automatically switch to the highest supported codec when paired with other Bluetooth devices. The Qualcomm aptX LL codec with <40ms low latency would be particularly useful for low latency synchronized audio and video on supported devices.

What makes the W5 stand out is the variety of settings tweaks. You could tweak equalizers, codecs, sound effects, and transmission rates instead of getting stuck on the defaults. You could switch between codecs to test out different qualities or to extend playback time and connection distance on the W5 by using lower resolution codecs.

With a high transmitting rate and compact size, you can expect the 150mAh battery to drain fast. Interestingly HiBy found a special solution to extend the W5 battery life by pairing the unit with a 1000mAh charging cradle.

There are 3 LED indicators on the charging cradle to show how much power is left. Officially, it states ~4-5 hours & 5 charges on the W5 charging cradle totaling 20 hours of battery time. Recharging the W5 via the cradle fully takes around 1.5 hours

Switching between LDAC and UAT modes playing WAV and other higher res files I have the W5 running up to 20 hours with non-high-res replay and just under 10 hours with higher resolution files and using the LDAC codec.

With all settings maximized towards optimizing the sound quality we tested the W5 using their own R6 and using a FiiO FA7.

The initial impression was a device tuned to be fairly V-shaped. The low-end is full-bodied and punchy with an elevated mid-bass quality along with decent power making it easily competitive with some mid-fi DAPs output.

With good energy in the lower spectrum, it starts to take a slightly darker midrange tone delivering a fairly laid-back vocal presence before pushing a more forward treble performance in the 6-10kHz range but not hugely emphasized.

The W5 provides a reasonably large chamber-sized soundstage but despite the sparkle and clarity, there are times I wanted a bit more headroom. With a balanced sounding or bass-light IEM such as the KOEL from Brainwavz, the treble does open up a bit more offering better clarity and air in the presentation.

Overall, the performance is excellent on both UAT and LDAC modes with more detail in the treble and good control in the mid-bass compared to aptX and other lower-resolution codecs. The only complaint is the stock tuning being a bit boxy/V-shaped. This can be tweaked on R6’s MSEB tuning menu to sound more open or by pairing it with a mid-high-focused IEM.

With either higher bitrate or sampling rates, the W5 outperforms quite a lot of lower-end phones and DAPs though it still lacks the solid power and extension that you can hear on wired connections from the mid-fi DAPs such as the R6.

Nonetheless, the output is easily more than satisfactory for Bluetooth audio playback. The W5 has a steady tuning with a lower output impedance than the R6 so lower-impedance IEMs will sound just fine on the W5.

Pairing the W5 with the Xiaomi Max2 (Bluetooth 4.2) using Android 7.1 and without the higher-end codecs, you will have a noticeably lower level of resolution and clarity in the whole spectrum. Power is still good to give the music more dynamics than on phone-out.

Switching back to the R6 BT connection you will immediately you will hear a much more open sound and better levels of clarity or detail. You will also notice a bigger difference with highly detailed IEMs such as the HUM Dolores I am using during the swap.

With the higher level transmission, the distance to performance stability was relatively short on the W5 when connected to a source device.

Expect to keep the W5 and your player close by or else the connection will be unstable. Do not expect UAT or LDAC devices to let you sit on the sofa and stream to your HiFi system a few meters apart flawlessly. You will also get glitches when system settings are toggled or when you move the connected device apart vigorously.

BTR3 surprised me with its LDAC performance when it came out not long ago and quickly became a popular device. It also adds USB DAC support which makes it even more functional and with an AK4376A DAC onboard the Fiio receiver delivers good bass depth and resolution with a decent level of detail in the mids. 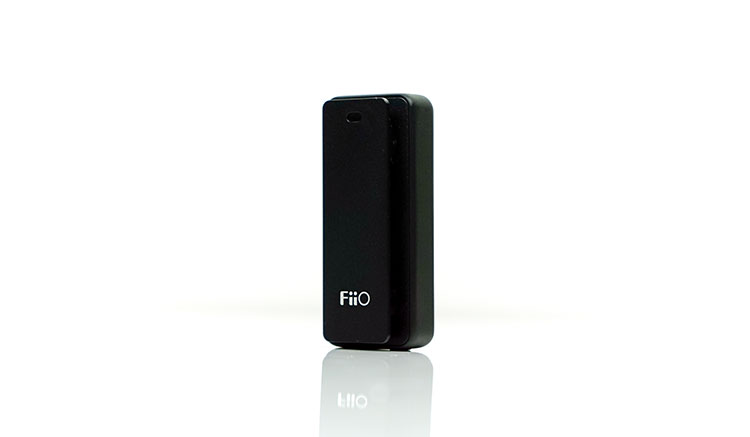 Compared to the W5 you will hear a different presentation with W5 being much more dynamic and engaging in tuning. It also has a cleaner vocal and a refined quality to its timbre. The BTR3 is quite treble-shy but thicker in the vocal. It sounds more balanced while the W5 squeezes out not only more bass impact but more texture in the treble.

If you require the receiver to work continuously throughout the day pick the BTR3 as the W5 has no charging port and the physical buttons on the BTR3 are pretty easy to use. However, if you are looking for a lightweight wireless device for your bus/ train ride or drive to work daily, the W5 will probably please you with its form factor and sound quality.

With similar chipsets onboard, the shanling m0 doubles as a high-resolution Bluetooth receiver as well as being an outstanding performer at the price given.

The two shares a similar choice of decoding hardware and Bluetooth receiver chipset, however, the W5 sounds less compressed and more resolved than the m0 in receiver mode. While the m0 is designed as a DAP with more power arranged for other components it is not hard to imagine it sounds inferior to the W5, which is dedicated to being a high-resolution Bluetooth receiver.

HiBy suggested in our conversation our W5 is still a prototype build especially the corresponding control app. There are certain small glitches in volume control and buffer so I am expecting a smoother experience when the final product is out.

The W5 is quite advanced for today’s BT audio market with the highest ever BT sampling rate in a futuristic but quirky design. The small form factor and the design that thinks out of the box, certainly contribute to the user experience though those who prefer physical buttons may have challenges as the W5 has none.

I also like how it is tuned for its usage environment with slightly lifted bass and upper vocal range but you may find yourself pushing a little harder on EQ for headroom and air.

While there are limitations with such an advanced codec in terms of sources that broadcast it right now I am expecting more applications for UAT when Bluetooth 5.0 gets more and more popular.

We could foresee larger DAC Amps integrating with stronger antenna and a big battery or Hifi receivers to adapt to such techs. It is quite possible in the near future wireless products could reach the same fidelity as on our clumsy stacks!