When I saw that the Poseidon is shipped with 4-pin balanced XLR cables by default, I was worried that it would be a hard-to-drive headphone. However, with an impedance of 64Ω, and an SPL of 103dB/mW, the Poseidon is not particularly hard to drive.

With most of my amplifiers, the Poseidon played quite nicely with them, where the Burson Soloist 3X only needed to be turned up to 50 at medium gain to reach the highest listening volume that I could bear.

People always say that tube amp pairings with dynamic driver headphones are “magical”, and to some extent this is true. So I plugged the Poseidon into the Little Dot MK3 SE, and it surely beefed up the midrange, while doubling down on the airier quality of the Poseidon. However, the richer nature of the amplifier also made the bass response a bit too slow for my taste.

Switching over to a solid stage amplifier like the Topping A30 Pro, there is an uplift in speed, while retaining a controlled level of midrange richness and euphony. This pairing, however, is more closed in, while still having that touch of airiness.

Finally, I tried the Poseidon with the Auris Audio Euterpe, and this turned out to be a pleasing pair, where the Poseidon’s richer midrange is given a bit more euphony and sweetness, while the bass remains taut and controlled. This also allows for better dynamic control, giving a better sense of depth compared to the previous pairings.

Upstream to the amplifiers, I tried different DACs such as the Audio-GD R2R 11 and the SMSL SU-9. While both pairings turned out well, the R2R 11 makes the Poseidon more lethargic, so I leaned towards the SU-9 for a more balanced overall chain creating a better tonal balance, good layering, and a spacious soundstage.

Coming from the same company, there are striking similarities, but the biggest difference between the 2 headphones is the driver material. Where Zeus uses a more traditional Beryllium dynamic driver instead of the more innovative pure Nickel dynamic driver.

Both headphones have a rated impedance of 64Ω, but the Zeus has a lower SPL of 100dB, which means that it would require more power to achieve the same volume level.

With my testing, I needed to increase the volume by a smidge to volume match the headphones. Neither headphones require gobs of power though, so most dedicated headphone amplifiers will do well with either.

When it comes to aesthetics, the 2 headphones are very similar, where the headband structure and the overall mechanical design of the headphones are mostly the same. Even the earpads are the same on both headphones, so they are equally comfortable.

While both headphones come with a balanced cable, the one on the Zeus is a 4.4mm balanced pentaconn connection with converters to ¼” jacks and 3.5mm TRS. So it seems to me that the Zeus might be more geared towards some portable sources as opposed to the Poseidon that seems to be more equipped for desktop sources?

Comparatively, the Zeus still has a lot more bass, but the quality of the bass is different between the 2, where the bass is simply more ethereal on the Zeus while lacking some grip, texture, and roundedness. 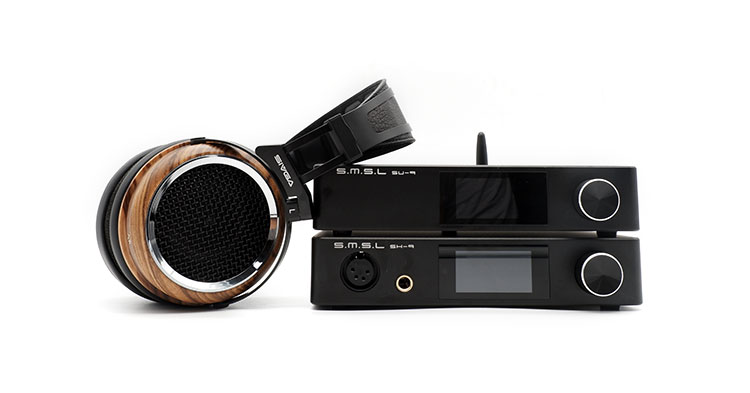 To increase overall driver rigidity, the Phoenix comes with a composite polycarbonate dynamic driver which is also designed to be rigid throughout the frequency range. Powering the dynamic driver is a 3mm rubidium iron magnet that will ensure high magnetic flux density in the magnet structure.

Both headphones have a sensitivity of around 103dB, but the Phoenix has a much lower rated impedance of just 32Ω. This translates to the Phoenix playing louder at the same volume level. In reality, this holds true, where I needed to add around 5 steps on the volume knob with my Burson Soloist 3X.

The color combination used with both headphones is very similar in that both of them are mainly black with some wood accents. The wood accents on the Phoenix though are made of real wood instead of a glossy vinyl wrap.

Based on my first impression, the Phoenix has a smaller earcup, and true enough, the earpad on the Phoenix is also much smaller. This results in the Phoenix being more of an on-ear design as opposed to a full-sized over-ear design.

Since the Phoenix has smaller earpad holes, my ears tend to rest on the earpads themselves. This means that it’s less comfortable compared to having full-sized earpads where my ears are properly resting in the earpads.

Both headphones are rolled off in the sub-bass regions, but surprisingly the smaller Phoenix has a more linear sub-bass response. Although both can produce an enveloping sub-bass presentation, the Phoenix is a bit more physical. The midbass on the other hand is about equal on both, however, the Phoenix timbre is more rounded and comparatively glossed over.

The Phoenix’s vocal presentation is pulled back a bit while having a richer more euphonic quality. With acoustic instruments, on the other hand, the Phoenix ends up being more honest between the 2, allowing for brighter instruments to remain bright, which may result in some sibilance on less than perfect tracks.

Treble on the Phoenix is more forward than the Poseidon while having the same amount of bite and control. However, the overall treble extension is less linear, resulting in reduced air and delineation between the images.

One of the most striking features of the Pheonix is the ability to create a very wide soundstage, and it’s still very wide comparatively. The images within the soundstage are more blurred together with the Phoenix while directionality still remains generally accurate on both headphones.

The depth within the soundstage is about equal, with the Phonix edging out the Poseidon due to a better delineation in its dynamic range.

Both headphones have an open-back design, however, the Hi-X65 has a smaller 44mm dynamic driver design. Austrian Audio says that 44mm is the optimal size for creating both a deep and engaging bass response while still maintaining high rigidity across the entire audible frequency spectrum.

With an impedance of just 25Ω and a sensitivity of 93dB/mW, the Hi-X65 is current-hungry. However, it’s still easier to drive comparatively, which means that it needs around 5 fewer notches on my Burson Soloist 3X to volume match with the Poseidon.

The 2 headphones create a very different visual aesthetic with their contrasting form factors. While both headphones’ earcups can be articulated, the ones on the Hi-X65 have a more limited range of motion, but it’s generally enough while ensuring that the earcups on the Hi-X65 don’t flop around when it’s not on my head.

Since the Hi-X65 is designed for a more traditional studio setting, its detachable cable is only limited to a single-entry system. So heavy customization will be required if you really want to have a balanced connection with the Hi-X65.

So both headphones have earcups that are large enough to accommodate my ears, it’s just that the Hi-X65 might be a bit tighter when it comes out of the box, but they are generally comfortable.

Being designed for the studio, the Hi-X65 has a much more neutral overall presentation. This means that there is an obvious absence of mid-bass embellishments, so it’s an even more matter-of-fact presentation of the music.

This allows the Hi-X65 to present a more textured bass response, easily presenting the nuances of drum hits and the texture of bass guitars. Vocals are also similarly textured, where the grain and the edginess of the vocals are more apparent. However, this leaves the vocal quality of the Hi-X65 comparatively drier and less euphonic compared to the Poseidon.

The HI-X65 also delivers a more immediate attack and an even quicker sense of decay compared to Poseidon’s slower-paced dynamic driver performance.

The Poseidon is the flagship follow-up to a Harmonic Dyne’s own Zeus, but aesthetically, they are strikingly similar. Their accessories also show a lot of that family resemblance, where they both arrive with a suitcase that serves as its carrying case.

However, it’s apparent that HarmonicDyne is learning from the shortcomings of their previous headphone, and thus the Poseidon is simply a more polished product.

Having good delineation between the images, the soundstage presentation on the Poseidon is wide and generally accurate, only lacking in the separation of layers within the soundstage.

Refinements in the tonality are also apparent with the Poseidon, having an overall natural tonal balance and some richness that allows the Poseidon to be both relatively accurate and enjoyable.