Fist pumping Swedish power metal legends, Hammerfall are back with their latest release, Infected, released on the Nuclear Blast Label today. These guys have been on the go since 1992 and have a built an extensive back catalog and hardcore fan base with solid power metal riffing and huge vocals courtesy of Joacim Cans whom I think has the perfect surname for a headphone website!

Those who have been following their career to date will know that Hammerfall have been a breath of fresh air to the sometimes over serious and burdensome power metal genre. Their previous release, No Sacrifice, No Victory with its rousing riffing and memorable melodies was their highest Billboard charting to date in 2009.

However Infected marks something of a departure from their tried and tested traditional metal outlook and have gone for a more modern chugging approach and a semi-concept approach deal with Zombie type infections which is an odd turn of events considering their rather more mystical approach to song writing and their somewhat more elaborate melody architecture. Here the spectrum of melody is slightly more limited though not without some memorable moments.

The production though is top notch, heavy and not overly refined. Credit for that can be laid at the feet of legendary producer, James Michael who has worked as a record producer, songwriter and/or engineer/mixer with many recording artists including Meat Loaf, Mötley Crüe, Scorpions, The Rasmus, Papa Roach, Trapt, American Bang, Saliva, Sammy Hagar, Halestorm and Brides of Destruction.

I don’t think Hammerfall have gone mainstream just yet but it is evident they are heading that way with the possible exception of a few highlights such as Dia De Los Muertos, The Outlaw and Bang Your Head.

Anyway for hardcore fans this will surely be added to the collection. Its still power metal, its still fun and you should still take a time out to listen to it because Hammerfall are still a cut above the average dirge right now. It just feels we could have got a bit more out of this given their pedigree. 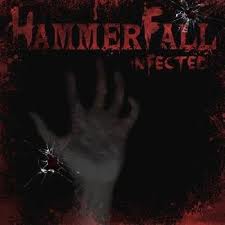