It is commendable that a flagship planar headphone these days can actually sound reasonable off a modest amping both portable and desktop and the Ether C Flow is no different in that respect.  It is not yet at the level of the Hifiman Edition X V2 for pure portable drivability but it is not as muted as the Audeze LCD-2 or first-gen Hifiman HE series.

Perhaps there is a factor in the increasing quality of amping stages in DAPs these days but even the budget Sony A35 got decent volume before it hit the top of its output and started clipping though the dynamics were way off what I would call ideal.

More powerful DAPs such as the balanced outputs of the AM3 module of the FiiO X7 and Cayin’s N5 also gave a suitable bump in the dynamics and resolution of the Ether C Flow but it is not until you throw in some portable or desktop dedicated amping that I found the Ether C Flow to really start to offer its true potential.

Natural to neutral amps such as the current mode Bakoon HPA-01M are an excellent match for the Flow C. The HPA-01M is built for planars with a current mode output negating the output impedance matching that you normally have with regular voltage output amps.

You get a speedy, neutral, and detailed presentation with excellent dynamics though the bass weight is tailed off ever so slightly.

Some people might enjoy that, it is kind of a midway path between the old Ether C flatness and the more u-shaped elevated curve of the Flow. If you want to get a touch of warmth and enhanced bass response the voltage output from the HPA-01m will deliver that but I think it sacrifices a little in the way of speed which is one of the Flow’s stronger attributes.

If you want something a bit more natural sounding, perhaps even a touch darker, then the Cypher Labs Duet is an excellent pick. It’s been knocking around for a while now but it’s still a quality amp and in balanced mode, you have plenty of power for the Ether C Flow to perform.

More than that tonally they both match each other core strengths perfectly. The Duet has a bias toward getting the best out of the low end and lower midrange which is exactly where the C Flow has been fine-tuned.

This is also a super smooth pairing on the top end, with accurate vocals with an excellent sense of space, and a low end that feels weighted but quick. Even with an old-school Solo plus iPod Classic, it sounded very fresh from EDM to hard rock.

Throw in something like Die So Fluid’s Crime Scene and the pairing has no issues at all churning out well-defined bass guitar breaks and a very powerful rhythm guitar performance.

Tonally I do like a more neutral system setup with the Ether C Flow as opposed to the slightly more organic and mellow tube setups I found myself gravitating to with the original Ether C.

The Flow is definitely less picky when it comes to matching for its treble response so amps I tended to avoid, especially with Sabre DACs in the system setup suddenly become quite enjoyable. Neutral setups such as the balanced output of the Mjolnir and Gungnir from Schiit gave a nice clean and dynamic response with plenty of snap in the low-end delivery.

If you want to drop down the aggression a notch and give the Ether C Flow a slightly richer and more liquid presentation I can highly recommend the ALO Audio Continental Dual Mono DAC and either the Stereo 6 tube amp with some Brimar 6v6 tubes.

Previously I would have EQ’ed a Sabre DAC supplying a tube amp with the Ether C just to make sure the neutral Sabre top end didn’t push the peaky aspects of the Ether C too far but with the Flow, it ceases to be an issue. The treble response is a lot smoother even with an analytical source in the system. 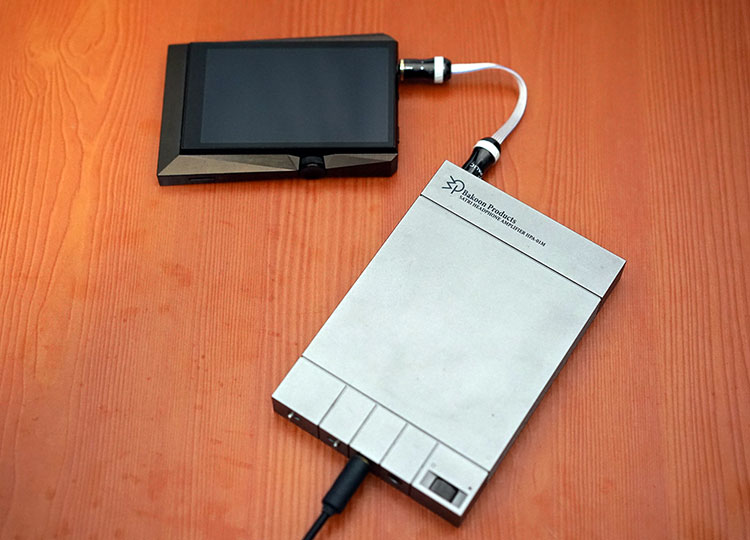 At $1499, AKG’s dynamic closed flagship headphone warrants serious consideration when compared with the Ether C Flow. It is built very well, got some premium materials in there, and has a cleverly designed pad that is much lighter than the plush Ether pads but seals just as good.

They also weigh pretty much the same and have very similar headband control systems even if they look aesthetically quite different. Of course, they are also $200 cheaper but on par price-wise with the Ether C.

The one big edge the C Flow has in terms of design is the detachable cable design and the ability to go balanced if needed with the DUM connection options.

At 36 ohms the K872 may not really need to go balanced but it would have been nice to have seen that option in the cable design. The C Flow’s planar design and competitive efficiency also mean it can scale pretty well in an unbalanced and balanced mode so put that one on the C Flow tick list.

Both are to my ears more musical sounding than the Ether C but the K872 and a touch brighter sounding in comparison to the C Flow’s more powerful presentation.  Bass weight and body on the K872 are more substantive than the Ether C with a bit more sub-bass presence but lacks the authority of the C Flow, particularly in the mid-bass performance and the lower midrange body.

I do have a slight personal preference for the K872 vocal staging over the Ether C Flow but I prefer the tonal quality of the C Flow vocals. The K872 vocals have a bit more presence and space afforded to them by the leaner lower midrange and linear bass performance.

In much the same vein as the original Ether C vs K872 review though I do prefer the Flow vocals for brighter sources whereas the K872 could at times slip in a bit more sibilance than the Ether C. The vocals on the C Flow seem less prone to sibilance and a little smoother sounding than the K872.

Treble performance on the K872 is a touch thinner and more brittle sounding than the C Flow which in turn is smoother in the lower to mid-treble with the better body.

I think both are substantial improvements on the original open K812 and the Ether C though, both seem to have corrected the original problems without sacrificing detail and articulation. On lighter airy tracks that require something a bit more ethereal I think the K872 is the business but when I need the additional power and gravitas the C Flow is more adept.

In price terms, it is still the closest match but with the advent of the C Flow, the DCA creation is putting a bit more clear light between the two than before. The C Flow is still the more neutral of the two but the gap between both in terms of the low-end body, (and slam), is now much closer than before and there is that speed edge that I give to the C Flow.

I still prefer the imaging of the C Flow over the XC (this is the version before the recent retune by Audeze by the way), it has a bit more space and resolution overall and better treble energy and articulation.

Weight and comfort once again are with the Ether C Flow at 394g compared to the XC at a comparatively huge 650g. The LCD-XC might win the pretty stakes but the comfort stakes go to the C Flow. The seal is about even though on both units as they sport some lush and very comfortable leather pads.

This little electret supraaural headphone is a very interesting concept and we will be putting out a review in the new year. It is closed, it’s woody and it delivers a very fast, speedy, and detailed presentation that is fairly neutral. In some ways, it is the complete opposite of the Ether C with a shallower soundstage and a perceptibly leaner bass body.

If you are moving away from the Ether C looking for more power the MJ2 is not the headphone for you. It projects sound closer to the way an electrostatic headphone does which is fast, detailed but polite, and lacking in sense of oomph (read power).

With the M2J you get a more mid-centric focus and a smaller stage to go with it so it is not quite at Stax level and more in keeping with the Koss ESP950 sound only more neutral. For me, this works wonderfully for acoustics and intricate acoustics but if I want power and a bigger stage and better body all around I am plumping for the Ether C Flow. 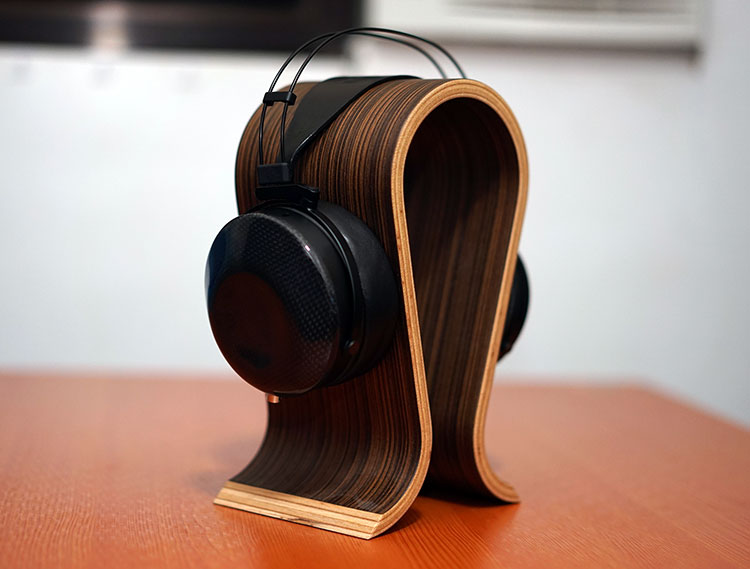 If you remember I said there is room in the den for both the Ether C and the C Flow right at the start of this review simply because I actually think the tonal change of the Flow C is evolutionary more than revolutionary. It offers something different and personally, I think the new tonal flavor will appeal to a wider audience than before.

The Ether C was already a fantastic closed planar headphone in its own right and I still feel the urge to pick it up for certain genres.

However, the C Flow gives me the power, particularly in the lower mids and midbass that puts some meat on the well-formed bones of the Ether C as well as smooths out that peaky treble response. It offers me more PRaT, a little bit more musicality, and much less pain in system matching.

The impression of the C Flow is much more immediate and impactful than the Ether C in that respect. If I want to lay off on the power a little, go for something a little flatter, and have the right match up I can still pick up the Ether C and feel pretty satisfied. Best of both worlds once again. DCA by continuing to sell the Ether C might actually agree on that point.