For the last few years I have been a regular attendee of our national Hi-Fi show held every November in the business district in one plush hotel or another. Quite apart from jostling for space as the President of the country no less flirts from room to room with an ensemble of like minded audiophile nuts you would also be hard pressed to enter a few of the showroom areas without noticing the achingly beautiful Cayin layouts from one or two well known local distributors.

Multi-tube integrated amps such as the striking CS 100A, the smaller MA-80 and the smooth retro wood finish of the MT-34L always draw in the vinyl and hi-fi fanatics looking for that finishing touch to their well thought out desktop system. That was 30 minutes of well spent visual admiration but as a portable media user I felt, well, left out of the party just more than a little. Sure I could grab their HA-2 tube amp and be content but I did go home a few times wishing Cayin actually paid a little more attention to that silent onlooker at the back with a pair of customs IEM’s dangling from their neck. We may have small setups but we can spend big also right? Well possibly ahem.

Well thankfully that wishful thinking won’t happen at this year’s Hi-fi show as Cayin have come up with their first dedicated headphone amplifier, the C5, and just to make it even more tempting they made the whole thing deliciously retro and portable sized. Retailing in and around $170, the C5 is priced at what I like to call the ‘upper budget class’ and would be seen as a competitor in that instance to the likes of the lower end Ibasso amps such as the D42, the FiiO upper end with the E12 and the similarly styled and priced E18 as well as the very popular JDS Labs C5 to name but a few. There are other amps such as the E11k that come in at almost a third of the price and size I might add but for my money $170 is already very competitive indeed if the sound and technical aspects of the C5 match up the visual promise.

Well I did say visual promise because the pictures actually do not prepare you for the C5 in real life. I was half expecting some sort of E18 derivative and whilst the lines are similar the whole presentation is a lot more eye catching then some of the competitors’ units currently in the market. Back in the day champagne gold was one of the top choices for audio hi-fi and both my old Marantz CDP and integrated Denon receiver had that same retro color styling. So holding the Cayin C5 in my hand with its similar champagne gold scheme and smoke tinted plastic finish presented me a lot of fond memories. Only a company steeped in hi-fi would think of champagne gold and placed side by side with amps from FiiO, Just Audio, ALO it just looks far more appealing. That is of course personal preference and you might prefer the cold allure of silver or black instead but it has been a very long time since I said wow during a portable amp unboxing session. 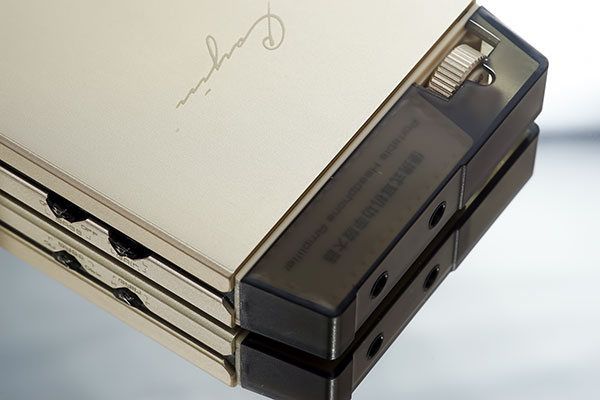 The C5 measures somewhat larger than the average portable headphone amplifier coming in at 136×63×15mm which is 10% larger than the E12 in length but marginally thinner in width and the same in height. Its also about 5% longer than the E18 but again marginally thinner in width by 3mm. Cayin seem to have designed the dimensions of the C5 to mirror that of a cell phone rather than the more traditional matchbox proportions of other amps that look to match more with snub nosed high end DAP’s such as Astell & Kern’s AK range. However, unlike the E18 and the smaller D42 from IBasso the C5 is strictly a headphone amplifier for audio and does not have a DAC component for USB audio from cell phones.

Therefore the C5 works in much the same way as traditional portable headphone amp utilizing an analog IC connection from either a headphone jack of your source of choice or in the case of older apple units a 30 pin to analog out. Whilst this means you can pretty much connect it to any source with such a jack it does invariably mean the C5 playback quality will be dependent on the sources DAC capabilities (and their amping section). It also means the front of the C5, outside of the design touches, is the same as most traditional headphone amps with a line in, a headphone jack out and an ALPS volume potentiometer. Both jacks and the pot are protected by a smoke tinged plastic cover which is a nice finishing touch designed primarily to protect the pot from inadvertent movement during daily use. On the right hand side looking down the C5 also supports two switches; one for gain and one for bass with high and lo settings. 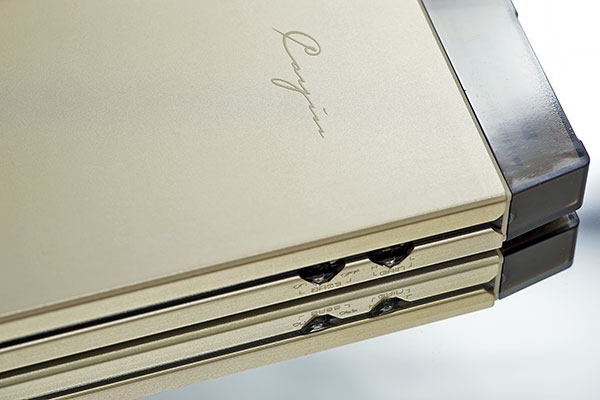 The Cayin C5 comes with 2 bright blue colored rubber bands for stacking; a single short micro to micro USB cable for the power bank feature and a short right angle, gold plated 3.5mm terminated IC for connecting to the source of your choice. I can’t say I am a fan of the blue bands; the color scheme seems very much at odds with the retro champagne gold of the C5 amp. Perhaps translucent brown straps would be a much better match. I would also have liked to have seen a single longer USB cable for charging purposes included also. 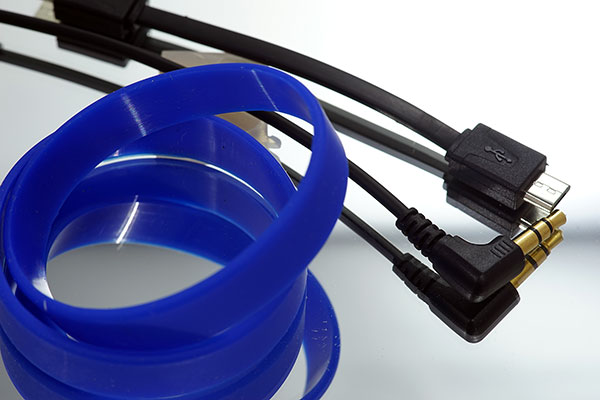 As well as being a traditional portable headphone amplifier, and much like the E18, the C5 also doubles up as a power bank for fading source batteries when on the go. Cayin have helpfully supplied each unit with a micro to micro USB short cable to allow most devices with similar unit (and those with adaptors) to easily connect and charge in the normal manner as regular power banks. The battery capacity is a rather modest 1000mAH/11.1v so whilst I do not have real time results similar power banks devices give you around 4- 5 hours on the go power from a full charge. Ultimately it depends on your own battery capacity also in terms of added power the C5 can offer. As a dedicated headphone amplifier the C5 offers a more respectable 10-12 hour playback time on a full charge and takes around 3-4 hours to charge to full capacity again. 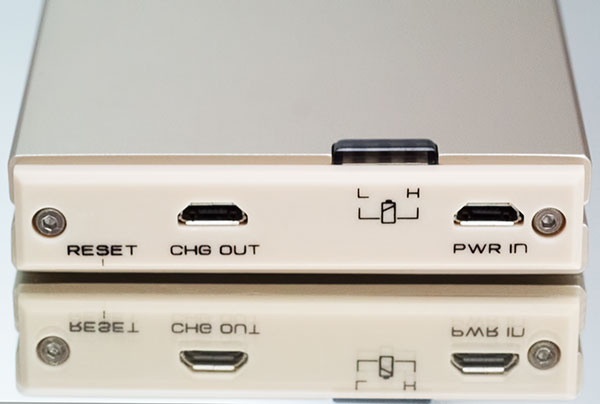 A small caveat though the unit I have would be considered revision 1 and as such there were some issues regarding the quality of the plastic cover including some uneven finishes around the jack ports preventing some headphones getting a sure connection and some bubbling in the finish on the corners. Since receiving this unit, Cayin have done a revision to the C5 which includes a revised plastic cover largely eradicating these issues. The revised unit also now includes a pouch for carrying the C5 which the rev 1 or review unit sadly does not have.