The BQEYZ Spring 2 is a new triple driver hybrid universal IEM with 1 dynamic driver, 1 BA, and a 9-layer piezoelectric driver. It is priced at $170.00.

Disclaimer: The BQEYZ Spring 2 that was sent to us is a sample in exchange for our honest opinion in this review. We thank the team at HiFIGo for giving us this opportunity.

To read more about insert HiFiGo products we reviewed on Headfonics click here.

BQEYZ Spring 2
Sound-wise, the Spring 2 is detailed and has great instrument separation, with an intimate presentation, however, some might find the treble a bit too shrill for their taste.
Slide here to add your score on the gear!101 Votes
7.5
7.5
Reader's Score
$170
HiFiGo

According to the manufacturer, BQEYZ stands for Best Quality Earphone for You. The company may sound quite new to anyone reading this, and that’s quite natural since they are new.

When HifiGo.com first asked me if I wanted to review this sample, I didn’t know anything about their brand, and I was thinking that BQEYZ is just one of those Chi-fi brands that have been popping up like mushrooms all over the internet. 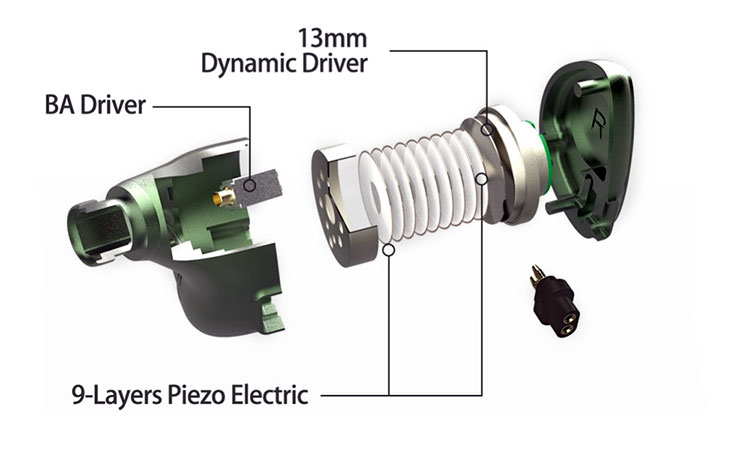 The Spring 2 is a triple driver IEM, but this is not your run off the mill triple driver that just utilizes balanced armature drivers and dynamic drivers. Unlike others, they have implemented an interesting combination of a dynamic driver for the bass, a balanced armature driver for the midrange, and a piezoelectric driver taking care of the highs.

What’s interesting is the integration of a Piezoelectric driver doing the super-high frequency, placed coaxially with the Dynamic Driver. Piezoelectric driver technology though is not new to being used in headphones. In fact, it was used in a very early headphone design where they needed extremely efficient headphones to be used on crystal radios.

Their main disadvantage at the time was that Piezo drivers were not known to be able to present midrange and low frequencies properly, so making them take care of the higher treble frequencies might be a good idea.

With BQEYZ tri-brid technology, mainly having 3 drivers, they also have to ensure that each of the drivers will be playing well with each other. Meaning their crossover frequencies should be aligned properly so that there will be no undesirable humps and dips within the frequency response, which may result in incoherent or unnatural frequency response.

I’m interested to see how the BQEYZ would be able to overcome the technical challenges posed by using a relatively new application of existing technology and be able to properly integrate it into the more commonly used BA and DD technologies that we have today. 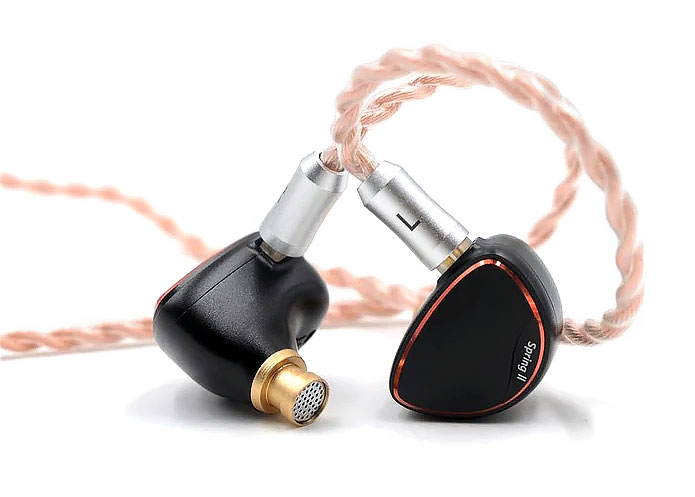 The shells of the Spring 2 were made with pure aluminum, machined on a 5-axis CNC machine. The CNC machine shells then underwent a 2 step anodizing process, ensuring that the colors of the shells would not fade quickly.

The words and letters on the shells were then laser etched, and the nozzle is made of solid metal. This gives me the impression that I won’t have to worry about the Spring 2 looking worn our too quickly when it goes through the rigors of daily life with me.

The heft and weight of the shells are substantial, but it does not mean that they will get dislodged from my ears that often when I listen to them. They have been ergonomically shaped so that they would not come loose despite some movement when enjoying music.

The stock cable is a 4-strand, 224 core single crystal copper wire, which was finely braided, and seems to be soft to the touch, and looks durable. The cable was terminated in a .78mm 2-pin in the socket at the headphone end. You get a choice of balanced 2.5mm, or 4.4mm, or a single-ended 3.5mm termination during any checkout process.

The cable is soft but thick for IEM’s, which would give me the impression that it would transmit the signals more clearly without any coloration.

The Y-split was also nicely implemented since there is a BQEYZ pendant that keeps any of the wire splicing hidden from the user, and protecting the wire splice any potential accidental snags. It was a nice touch that they also added an additional clear bead for adjustment.

Cable terminations into the IEM’s fit snugly, with a clear plastic standoff hiding away the termination once plugged into the IEM’s. Plugging the cable into the IEM shells gives a satisfying smooth sensation, that gives me the impression that they were really made for each other.

With IEM’s, I usually lean towards the older style of IEM’s which have their wires straight down, instead of looping around the ears. I think I’m a bit of an old soul that way. However, when I tried putting these on, the fact that they looped around my ears didn’t bother me, since the cable was so soft.

The shells also never touched my ear, which is already good in my book, since this would ensure that they won’t become uncomfortable for long listening sessions.

The Spring 2 came with 3 types of ear tips, each one gave the Spring 2 a distinct flavor. The first tips that I tried were the ones labeled “reference”. Reference tips made the Spring 2 sound very bassy and messy, and they made the sound feel like it’s too deep into my head.

The foam tips on the other hand cleaned up the bass, making it much more articulate, while the sound was still too close to my ears yet again. Finally, I tried the ones labeled atmosphere, and they sounded the most balanced to me, also having the most open sound stage of the 3 tips.

I ended up doing most of the listening tests with the atmosphere ear tips since they made me like the Spring 2’s just a bit more.

The BQEYZ Spring 2 arrived with a very refreshing teal box. The team at BQEYZ really took “first impressions last” seriously, because when I opened the box, I was pleasantly surprised that the box doubled as a presentation case of sorts.

The sides of the aluminum faceplate of the IEM’s showing their smooth aluminum finish, with a metallic red lining drawing your eyes to the IEM’s themselves.

In the package, they sent over 2 kinds of ear tips, the first kind being labeled Atmosphere, and the other being labeled Reference, both come in small, medium and large, and 1 pair of small memory foam ear tips.

The tips were stored on a stainless steel card, with holes exactly sized for the ear tips, except for the memory foam tips that were stored in a small plastic case that resembles the little cases for storing pills.

The transitions between each driver need to be properly tuned to smooth out any bumps and dips in the frequency response. Each driver in the setup must also be properly matched to the others, to prevent one from overshadowing the other.

The Spring 2 generally sounds very detailed when I listen to songs that play mainly in a certain region. With vocal-centric tracks, or with instrumental tracks with just 1 or 2 instruments, the Spring 2 sounds highly articulate, detailed, and textured.

However, the Spring 2 has a bit of trouble presenting a perfectly coherent presentation when the song starts playing across the entire frequency spectrum.

In some complicated passages, like some parts of The Greatest Show from The Greatest Showman, the treble tends to become more shouty and breaks down due to the complexity of playing bass decays while playing high-frequency instruments. With less busy tracks, the Spring 2 does just fine in presenting the nuances of each passage.

The Spring 2 has the ability to present details very clearly, and this also gives the spring 2 an edge in instrument separation. Every instrument is clearly distinct from one another, giving me an easy time picking out which one is playing what note.

For an IEM, the Spring 2 is great at instrument separation and imaging, however, the soundstage tends to be more intimate, which is sometimes a good thing when you want to listen for the minute details in the music.

The bass frequencies in the Spring 2 can be described as articulate, and smooth, while slightly pulling the punches just enough to toe the line between being boomy, and having a bass presence. Although the decays sometimes seem to be cut short, it makes the Spring 2 sound clean, and the bass frequencies don’t seem to encroach on the other frequency regions.

While the midrange of the Spring 2 is smooth, it remains very articulate. Details are very good, with each note, and overtone being presented, without shouting it at your face. The Spring 2 really shows you that it can be accurate while being smooth.

With the piezoelectric drivers, the treble region of the Spring 2 is presented as fast and detailed. Every shimmer and airy detail is highlighted. With the piezo driver being highly efficient, the Spring 2 is able to present details that I can’t quite pick out with other IEM’s, much more easily.

With the extreme efficiency of the piezo drivers though, the Spring 2 could sometimes end up being a little too shouty with brighter tracks.

I first tried listening to the Spring 2 through the headphone jack of my Nokia 7.2. Although the sound signature was overall pleasant, the Spring 2 simply sounded congested, and in my head. The imaging was just messed up, and the clarity across all frequency ranges was simply not there.

I then tried to plug it into my ifi Zen DAC, with their power match mode for IEMs, and the Spring 2 simply came alive. The Spring 2 sounded like a different IEM altogether when I plugged it into the Zen DAC, giving it crystal clear imaging, dynamics, and a much better sound stage.

The Spring 2 is just listed at just 32Ω, with a 110dB sensitivity, which makes them seem easy to drive. However, they are quite source revealing, so they do benefit from a nice clean source.

The Sony XBA-N1AP is an older IEM, released by Sony in 2016, is a dual driver setup, with 1 Dynamic Driver, and 1 Balanced Armature driver, the price at around $200 at the time of release.

N1AP is built with just plastic shells, and it came with a cloth pouch and a simple cable with MMCX terminations for each of the IEM’s. While the Spring 2 is built much better, with aluminum shells, braided single crystal copper cables, and a hardshell case.

Clearly, the Spring 2 is built for the more modern consumer, with the more attractive accessories package, build quality, and overall presentation.

The sound is quite different between the 2 IEM’s. Comparatively, I perceive the N1AP to have fewer details than the Spring 2, probably because the air frequencies of the Spring 2 are a bit more emphasized.

While the N1AP seems to lag behind the Spring 2 in terms of details, the N1AP has an overall more coherent sound signature. The N1AP is able to present a wider perspective of what each song is about, not putting any particular part of the song under a microscope.

To me, the Spring 2 is very detailed, similar to putting a song under a microscope. The N1AP on the other hand just lets you see the song in its entirety while viewing it from the top of a hill.

The Spring 2 also came with functional and practical accessories, and robust build quality, usually found in IEM’s priced much higher than their current asking price, the Spring 2 presents great value for your money in terms of what you get in the box.

Sound-wise, the Spring 2 is detailed and has great instrument separation, with an intimate presentation, however, some might find the treble a bit too shrill for their taste.

With a great value proposition at its current list price of $170, the Spring 2 seems to live up to its status as the BQEYZ flagship IEM.