Noble have gone with something a little bit more musical and fun sounding with the Wizard Savant over the Classic 4. This is not as neutral or flat and therefore unlikely to sound as “reference” as the Classic 4. The Wizard Savant trades absolute analytical correctness for something a bit smoother, a bit more flowing, a bit easier on the ear but no less competent in detail retrieval and resolution.

I would not term the tonality colored though, it’s still has definite audiophile sensibilities, but this time it sounds very natural and with a slight edge taken off, especially at the top end which didn’t sound as dry as the Classic 4 but just as clean. The Wizard Savant reminds me a lot of junior version of the ADEL A12 from 64Audio which retails about 4 times the price. If you are looking for something more genre agnostic, then the Wizard Savant makes a very good claim indeed. It’s an earphone with very likeable timbre, great extension and just enough smoothness to prevent fatigue after long listening periods.

The Wizard Savant has a slightly elevated bass response, particularly around 50-100hz range before tapering off a little from 30hz downwards. Bass extension is somewhat more convincing than the Classic 4 and certainly is not as flat or neutral with a hint of warmth and more presence than the Classic. The resulting response is impactful and more musical but its not exaggerated or slow. Having said that I didn’t find the Savant bass as fast or clinical as the Classic 4 which had a tighter and cleaner low end.

Sub bass on the Wizard Savant is good but not dominating with a slight roll off right at the bottom, the main punch comes from that 50-100hz area so EDM and hard rock will benefit most from the Savants richer bass line and orchestral sub bass drum work might lose out. It is horses for courses really between the two and as before I felt the Classic 4 couldn’t deliver the bass vibe and feel of modern rock and pop the Savant really can.

Tonally the Savant mid-range is a smooth and spacious sounding though slightly recessed in in the lower mids but not by much. The mids on the Wizard Savant are designed to give a bit of a platform to vocals, perhaps more so with female vocals over lower pitched male vocals. It doesn’t possess any huge peaks, more of a drop off in the lower mids until around 1-2k with a smooth elevation until 3k before falling away again in the top end.

Thought smooth sounding I didn’t find the mid-range to be that full bodied, thick or lush. It lacked a little low end presence making note seem a tiny bit thinner than they needed to be. The trade-off seemed to be more of a focus on excellent detail, separation and clarity over something too rich or full sounding. That being said instrumental separation is excellent and very well controlled never once sounding congested. Paquito D’Rivera’s stunning clarinet chops in “Tu” were inch perfect in both speed and clarity. You couldn’t really ask for more in that department.

Vocal performance on the Wizard Savant is very good, particularly with female vocals. I am a big vocal lover and the Savant didn’t let me down in this department in terms of control and sibilance free performance. Dash Berlin’s “Like Spinning Plates” female solo vocal was pitch perfect, smooth and sibilant free. Sometimes on lesser setups this track can have a hint of grain making the vocal pitch sound a bit coarse or harsh but not with the Wizard Savant which kept everything crystal clear. If anything the Savant could do with a bit more ‘beef’ much like the rest of the mid-range but if you are after clarity and detail, then the Savant really excels.

The treble on the Savant aims for extension and clarity with a purposeful dip in the lower treble that subdues any nasty sibilance and keeps percussion works slightly in the background. Noble have opted to put the sparkle in the Savant just a little bit higher at the 10k range rather than the 5-7k range which is hugely welcome. 7k peaks are awfully challenging to match with source and amps and often distract unnecessarily especially sounding splashy if not done correctly.

With a subtle peak at 10k, Noble is able to tune the Savant to sound clean and clear with good extension but avoiding any unwanted sharpness to produce a very non fatiguing treble performance that still has plenty of sparkle. Post 10k things begin to fall away sharply so you do not get extreme extension but only the treble purists would notice something like that. Me personally this is the kind of treble I tend to enjoy especially with genres that need a good treble detail like trance or prog rock works like Pink Floyd where I find there is a lot of subtle detail that needs a good focus on clarity.

The Wizard Savant is a lovely compromise between being expansive and accurate. The width is just wide enough to sound realistic without being too left/right and staging overall sounds bigger and more hall like compared to the more intimate Classic 4 sound stage. Separation is spacious and with good placement and very accurate imaging and whilst there is not a huge amount of depth or extension I think there is just enough to convey a very believable “3rd row” in the audience type experience. In all a very coherent presentation. 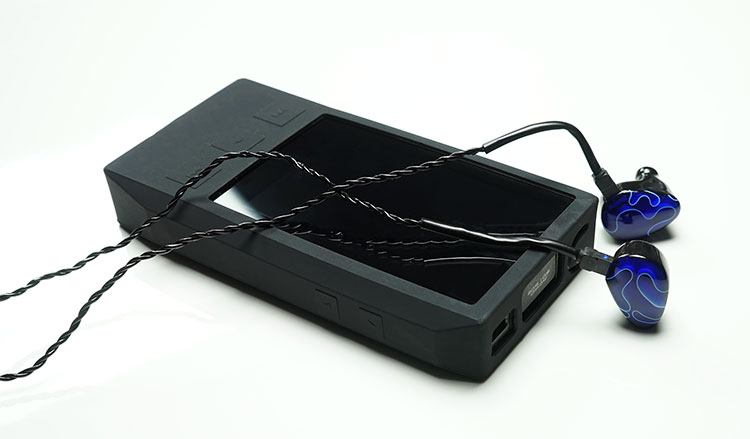 The Wizard Savant is rated at <30 ohms so it is unclear how much below 30 ohms it is rated at or if it is indeed right on 30 ohms. Educated guess might place it at around 26-30 ohms with around 106- 116db but it is entirely debatable given the lack of specs Noble is yielding for the Savant. At no point on any of the DAP’s I tested did I detect any unwanted noise or background hiss with the Savant.

That being said it’s a relatively easy IEM to drive out of most sources including smartphones. I had no issues at all with the BB Passport which I regard as my best smartphone but overall my weakest amp and source. Volume on the BB Passport topped out at 7.5/8 and somewhere in the same range my Westone 4 quad BA and ever so slightly less efficient than the Cypher Labs C6IEM V1 by half a bar of volume. The C6IEM is rated at 26 ohms so that slight increase in efficiency probably places the Savant closer to the 30 ohm mark.

I have to say on the budget side of things full marks also for the FiiO M3. Paired with the Savant made for a very easy going and pleasurable listening pleasure. That slightly richer weighted tone of the M3 paired very well with the crystal clear natural tones of the Savant. Nothing peaky, too thin or sibilant with volume at less than 50%. Sure its not the last word in resolution or dynamics but it more than acceptable for a budget source.

Higher up the food chain and the Savant sounded excellent with clean and clear DAP’s such as the X7 with a gain output sitting very comfortably at 65 on the X7’s digital volume control, and around 65-70 on the warmer sounding DX80 from Ibasso. Generally speaking, the Savant sound is a more flexible sound for DAP matching than the Classic 4. That natural flowing signature lends itself very well to DAP’S from the FiiO X5ii right up to the AK380. I couldn’t really find a DAP that made it too sharp or harsh.

If there is one area that I felt might be something people will want to tinker with is the general richness of the mid-range. Stock on the AK240 might leave a few people wanting for a bit more body but then that’s a common theme for the AK240 regardless of its outstanding accuracy. If your DAP has an EQ you might want to fiddle around with that for the desired effect or pick an inherently warmer or richer amp such as the Vorzamp Duo or the Cypher Labs Picollo.

Who is a clever little Wizard then? If the Classic 4 was all about neutrality for pure reference with detail, then the Savant is all about that same level of detail in a slightly more musical package that audiophiles can enjoy without shouting “colored”. The slight thinness of the lower mid-range stops me from awarding supreme marks but I have to say I really enjoyed the natural tonality of the Savant and its ability to produce a detailed yet fatigue free listening experience.

It’s also a much more flexible IEM than the Classic 4 for genre matching and DAP matching as a result of that engaging sound. You will rarely get a complaint for me on this IEM on just about any DAP you can throw at it, or smartphone for that matter. Those looking for a healthy dollop of sub bass won’t find it here, this is not an exaggerated bass response. It is much more coherent with the rest of the range than that but there is just enough mid-bass lift to give it a nice injection of welcome warmth where the Classic 4 went missing in action.

The price, starting at $599 and moving up to $799 for the special editions, is competitive actually for this type of performance which is a rare thing these days. And I guess that is the “knowing” in the Savant right? Would you pay what is being asked at the cash registers or do you need a driver count to figure out if you are getting value? A small part of me is really dying to know if it’s 2, 3 or 4 BA’s inside, but a large part of me is just saying let it go, it’s not worth it, just enjoy the sound, and quite right too.