Beyerdynamic had a busy year in 2016 with the release of the DT1770 and DT1990. These were updated revisions of the older DT770 and DT990 classic models, both in terms of sound and looks.

Personally, I thought the DT1770 was an excellent studio headphone when we reviewed it last September but not ideal for simple listening pleasures with its unusual, though effective, frequency response.

I only briefly heard the DT1990 at CanJam earlier this year also and much of the noise about the ‘abundant’ treble response seemed a little overblown to me. It sounded good and perhaps better than I expected.

The Amiron Home open headphone is the latest creation from Beyerdynamic, released just a few months ago with an SRP of $599. It sits in a slightly different niche to either of the two aforementioned studio headphones.

In fact, Beyer wants you as far away from the studio as possible with the Amiron, hence the name “Amiron Home”.

The Amiron Home is being pitched by Beyer as a Tesla technology open back circumaural headphone suitable for home listening and pure musical enjoyment as opposed to studio or specialist use.

Now Tesla is nothing new to Beyer, it’s been used since way back on the T1 first gen but this time around Beyer claim to have produced a dampened version that greatly diminishes unwanted vibrations and tamed that treble peak that some find polarizing on previous Beyer headphones. In short, this is being pitched as a relatively easy listening headphone but still retaining the clarity and control of the Tesla technology.

Beyerdynamic is also pitching the Amiron Home as one of their most comfortable designs yet, in keeping with that long ‘easy listening’ pitch of the new headphone. The pressure balance and positioning combined with a new headband and ear pads are engineered to be very comfortable. We are talking Alcantara microfiber materials here which I find very comfortable to use.

The Amiron Home is also the successor to the older T90 though in the marketing pitch Beyer has not been that explicit in making a direct connection between the old and the new. There is some credence to that legacy if we look at the older T90 marketing material which goes to great length to describe the T90 as a headphone for “spontaneous listening enjoyment”. The T90 also boasts an open back Tesla design as well as being spec’ed at 250-ohms. 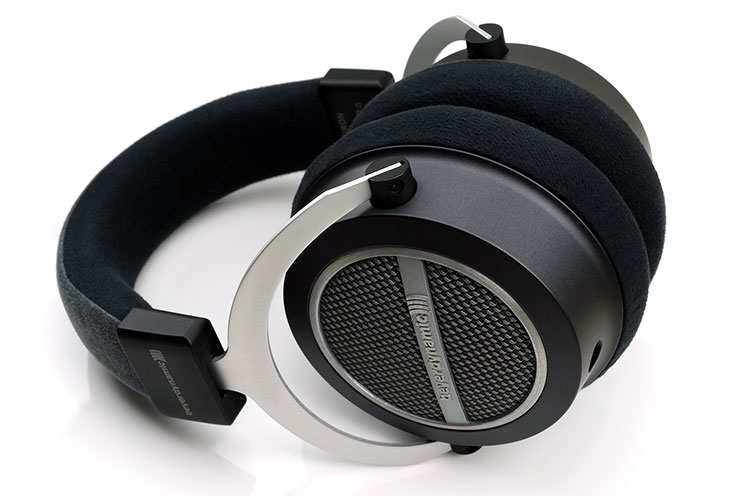 The Amiron still had the familiar form factor of a Beyer headphone with its very solid build, angular arched metal gimbal design, well-padded headband and circular cups. However, compared to the older T series and the latest DT1770/1990 releases there are some differences.

The first is the accented colors on the Amiron home are neither pure black (DT1770) nor all gray as you would have found on T90 and T70. The second is the use of a dual detachable cable system on the Amiron as opposed to the non-detachable single-entry cable system of the older T series. As a consequence, gone are the older mini cabling from cup to headband you got with the older headphones making it a much cleaner looking design.

The Amiron Home also weighs in at 340g which is not insignificant for a full-sized dynamic headphone though it is pretty similar in weight to the previous T90 and T70 line up.

The Amiron has a charcoal hard plastic cup finish with brushed silver aluminum accents on the rings. There is a single strip running across the middle with the Beyerdynamic logo on it which differs to the older T90 which was more uniform in its open mesh design and lacking in any front cup branding.

The gimbals, much like the old T series, is a solid gray/silver finished aluminum which is slightly smoother in its cornering than the DT1770’s brushed black metal which felt slightly rougher.

Beyer has supplied a fairly lengthy 3m dual detachable cable with the Amiron Home. This is the kind of cable that sits comfortably with desktop systems rather than mobile systems so there is no equivalent 1m shorter cable for use with DAPs and moving around. I guess that is consistent with the “home” pitch. 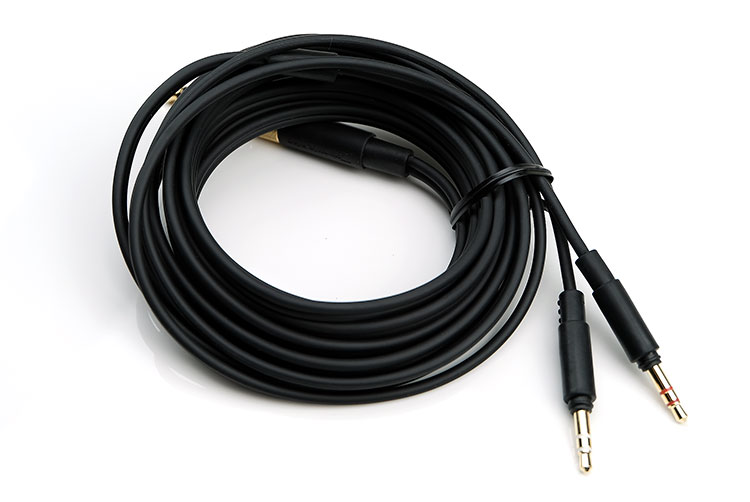 Mind you the connectors are now 3.5mm gold plated stereo jacks with a small threaded locking system so the potential for balanced and shorter aftermarket cables is much better than the 3-pin system of the DT1770/1990. The cable is also terminated on the input side with a 3.5mm straight angle plus with a screw on gold plated quarter jack adapter with a rubber y-split keeping both left and right channels neatly together.

The materials used both on the headband and pads are incredibly comfortable and much thicker than the old T series pads. The headband us a micro-velour material as opposed to the faux leather of the DT1770 and the micro suede of the T70 headbands. 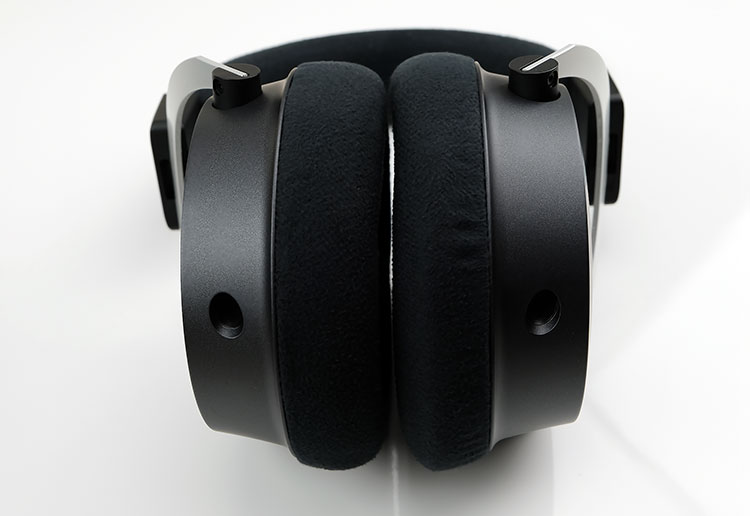 Pressing both the T70 and Amiron pads at the same time I got a little more resistance on the Amiron materials. It also felt a little deeper and less likely to flatten onto the harder headband adjustment rods.

The ear pads are made from a soft alcantara material but they are deeper than the older T series pads and more resistant to flattening or allowing the ear to touch the drivers. They also have a better foam filling and I believe one which Beyer favors for the low-end response over the older pads. Either way, the new pads are much better than the old ones.

This is an open back headphone so isolation is not great. The pitch of it being a home headphone ideally makes this an indoor quiet time listening experiences as opposed to the closed back DT1770 and T70 which had superior isolation more fitting for mobility and noisier environments such as studio or commute.

The Amiron Home has the typically functional packaging you get from Beyer with a fairly informative and bright white background retail box similar to the T series and DT series headphone packaging. Inside though you get a slightly different carry case experience along with some leaflet materials and the 3m cable. Unlike the DT series you only get one set of pads and not two different type (faux leather and velour). 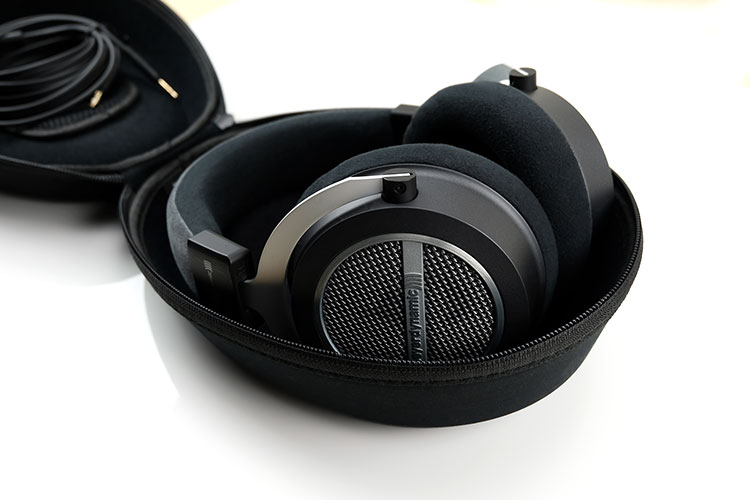 For me, I much prefer this case to the older boxy type cases and even the newer firmer larger nylon cloth covered case of the DT1770. It is much smaller and easier to transport or pack in your bag and sports a more contoured modern design. I get that the DT series boxy cases are more for pros and maybe a bit more protection in them but they take much more space in your bag than the Amiron case’s tiny form factor.

This is a warm to neutral tonal musical signature with a V-shaped frequency response. Combined with the open back design it presents a fairly large soundstage with a slightly recessed but clear sounding midsection, an elevated and slightly warm low-end and a treble response that’s sparkling, particularly around 7-8k before dropping off pretty quickly the further up you go into the brilliance region.

And yet, compared to the T series, this is a more relaxed listening experience with a treble response that fatigues far less. That is not to say you won’t be able to spot that peak in your listening but it does provide an appealing contrast with the warmer low-end performance without dominating and feels more coherent or less edgy as a result.

Presentation wise the Amiron Home is more deep than tall or wide with just a hint of roll off beyond 8k throwing in a slightly darker tone with the majority of the energy in that forward lower to mid-treble peak. However, the sense of spaciousness is good with excellent layering so I never found the sound congested, particularly with the vocal performance that never really came off as subdued or lacking in clarity.

The low-end is where the Amiron draws the majority of its warmth from with its elevated mid-bass response and fairly full-sounding performance rather than pure sub-bass rumble. There is roughly a 5dB increase from 20hZ to 100Hz where the bass peaks then you get a fairly linear drop 10dB from there to around 1k in the mids before it levels off.

As such you get some decent impact and good depth from the Amiron but not as much sub-bass power as the DT1770 which tended to sound a little cooler in tone with a more pronounced dip before it hit the mids but could still generate a lot more rumble.

Thankfully the mid-bass elevation is not overcooked and that drop in the FR from 100Hz to 1k prevents it from sounding wooly or bleeding unnecessarily in the mids. Instrumental clarity there is good with decent fundamental tones to lower pitched notes and a healthy dose of PRaT.

Mids on the Amiron are a touch cleaner and more neutral sounding than the bass response with a timbre that is reasonably accurate though with slight partial overtones creeping in the further up you go with the infusion of upper mids energy around 4k and again into the lower treble at 7k.

Upper bass to lower mids have a slightly fuller sound though nothing fuzzy but the note sustain and warmth is a little higher so rhythm and bass guitar carries a bit more weight and presence.

Vocals are not that forward given the Amiron’s v-shaped presentation but I actually find them clean and clear and very well presented, particularly male vocals which sound accurate and enjoyable. Anthemic hard rock power singers such as Johnny Lima, Marc Scherer, and Ivan Moody seemed to really fit well with the Amiron mid presentation whether it is a ‘grumbly’ low range Moody rant or the more melodic ‘sweeter tones ‘ of Scharer.

Further up and higher pitched vocal performance can be a little sibilant particularly if the recording is bright or the vocal is overly breathy. Upper mids percussion passages can sound a little harder and more prominent which at times can push down on female vocals accentuating the sibilance. I have to emphasize it is not always going to be the case, Keiza’s ‘Hideaway’ sounded superb on the Amiron but LadyHawke’s “Sunday Drive” was a challenging listen with its upper mids percussion energy.

The top end is lively in the lower treble with a definite spike from around 5k and 7k (approx. 10dB above the mids) and then a drop off post 8k in the final octave.

The forward and energetic lower treble response will bring a fairly high level of perceived detail and clarity with a definite focus on an energetic and lively reproduction of percussive and synth passages.

Having said that, compared to the T series it is much more palatable and easier to listen to than before. There is a good level contrast as well with the warmer bass signature to produce what I would term a more ‘exciting feel’ to the music and does contribute to the Amiron Home’s more musical qualities.