I am a sucker for little tube amps and long since I got into this little addictive hobby there has always been a headphone tube somewhere so it comes as no surprise then when I received the V3 and the Ocean from Bravo Audio that space was immediately cleared on the desktop for their display.

Now, these tube amps are among the smallest I have seen to date for desktop setups (not counting mobile units such as the ALO Continental though someday worth a comparison) and interestingly both look nothing like each other. The V1, V2 and this, the V3, all follow the same basic open back construction which is also popular with the likes of Indeed (the other very similar tube amp manufacturer). In fact, you could almost make a point that the v3 is the v1 with an extension for the EQ options and as such if it not for the EQ options I guess a review of the V3 would be redundant. It takes the same Harmonix 6922EH tube also so the similarity is pretty much there with the earlier V1.

The Ocean, on the other hand, is an altogether different beast with a more traditional aluminum enclosure and an added dual line in option at the back giving it a higher level of flexibility over the v3 but without any eq options. It also looks more durable and certainly much safer in terms of protection from the heat sinks but it still runs pretty hot so do handle with care. I believe going forward Bravo Audio might be using the Ocean design for their new concepts more than the older v designs and this makes sense since this schema has been doing the rounds now for a few years with other companies.

So let us see how these two shape up then. 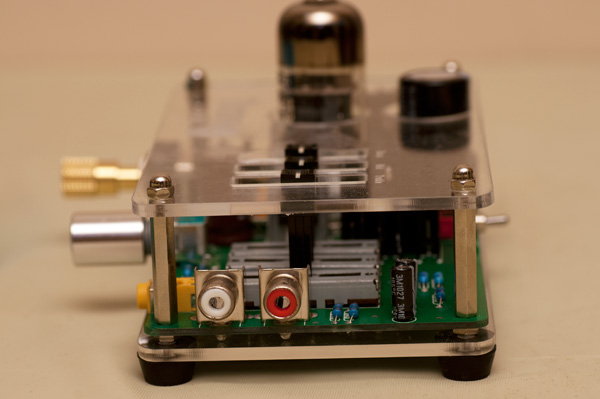 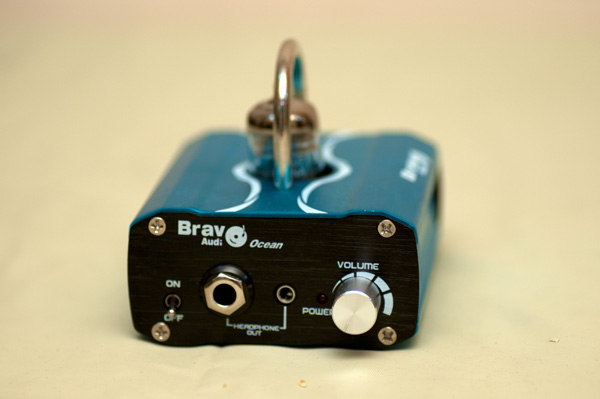 On a technical level, the Ocean varies in terms of options and tubing. Whereas the V3 has a basic analog or RCA inputs the Ocean has an added line input through a 3.5mm jack and an RCA line output (giving it some pre-amp capability) but lacks the passive EQ that the V3 has. The tubes used are also markedly different on each unit with the v3 using an Electronic Harmonix 6922EH found on the V1 amp and the Ocean using the 12AU7 tubes found on the v2. From the initial review by Don, this will likely mean the v3 has a bass orientation and the Ocean more mid-centric but we will get into that later on. For now, though you cant swap the tubes between these though you can tube roll from the same group of tube families fairly easily. The stock tube on the Ocean is the Shu Guang 12AU7. 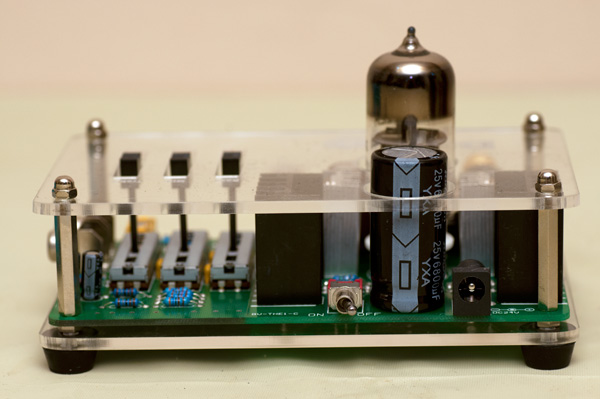 V3 from the back 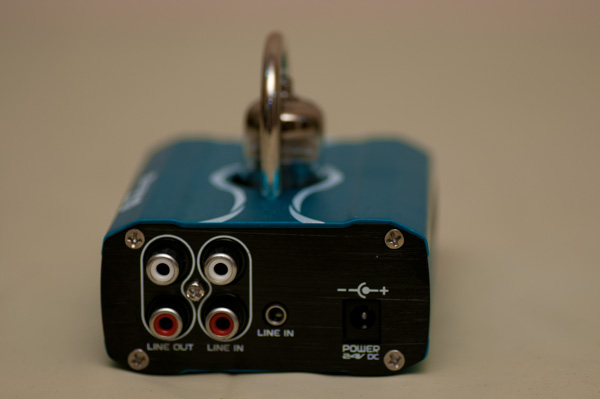 Both of them are Class A so they run pretty hot – and I mean hot! With the bravo v1, both heatsinks were on the outside of the PCB where air can pass it easily which is needed to keep things from overheating. On the v3 the right heat sink is in the middle of the PCB and close to the EQ rods and the cover that is over reduces the free air flow somewhat. The right part of the amp can run slightly hotter than the left which is different from the V1. I found on a few occasions changing the EQ is like turning bread in an oven. On the Ocean, the whole casing is the heat sink so best to handle it with the little arch metal ring as I found this to be the coolest part of the unit when fully powered for a long period of time.

One thing I noted on the power specs was that the output rating for all Bravo Audio amps is set at 500mW which is pretty respectable for such a small amp. The real trick is in the massive gain at 30dB and it is that which gives its ‘punching above its weight’ quality with even some very hard to drive headphones. Don’t get your hopes up through that these are the answer to some sort of mini-Hifiman planer powerhouse for the HE6.

Inthe context of their size and pricing these amps are superb but be warned you need to pick carefully based on your existing setup as the tubes do play a role in how they sound and you nay or may not get a great match as a result. Both are inherently warm, organic and very liquid and help to take the edge of the sound. The V3 EQ presents both benefits and problems. 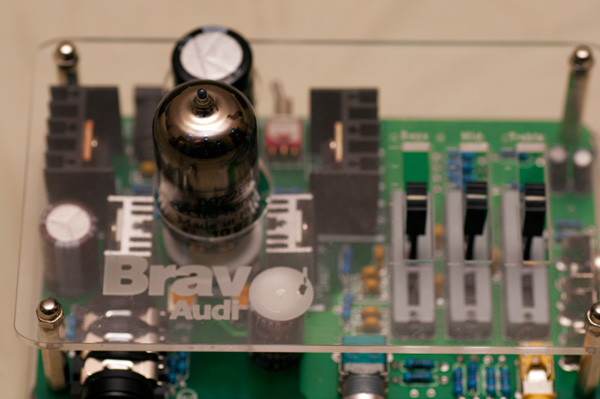 The house sound is very much a basshead’s choice with a v-shaped sonic signature. Now one would expect the EQ to present you with some good options to get out of that v-curve if so needs be and to some extent you do but the sound just is not as satisfying as replicating a v shape on the EQ which in effect just mimics the core sound. I did like it flat at zero (the bottom and not the middle – old timers beware on this, the middle is not zero) – here is seemed most balanced and less colored. With eq at the bottom it sounds cleaner and has a touch more sparkle – this almost feels like the natural starting point.

Moving the EQ up to 7/4/7 (bass, mids, highs) gave it’s classic v-shaped and it really excelled at this and for me gravitated more to hip-hop, R&B and Dance where the mids demand is not so essential. Moving the mids up to 5 or 7 did bring the mids more forward but lacked the finesse a little and just didn’t seem as satisfying as the natural v-shape. Adjusting the mids down to a 7/5/7 seemed the best compromise using the ATH ESW9 and the Hifiman HE300’s (wired with silver) as my test cans. Niki Minage and Speech Debelle tracks where really punchy and warm on this setting – more musical than accurate and highly enjoyable.

The power and big gain adjustments fill the sound out very well and gave added weight to the bass, particularly after tweaking the passive EQ. It had no problems driving my low impedance cans with authority and didnt struggle volume wise with the lower end Hifiman planers. 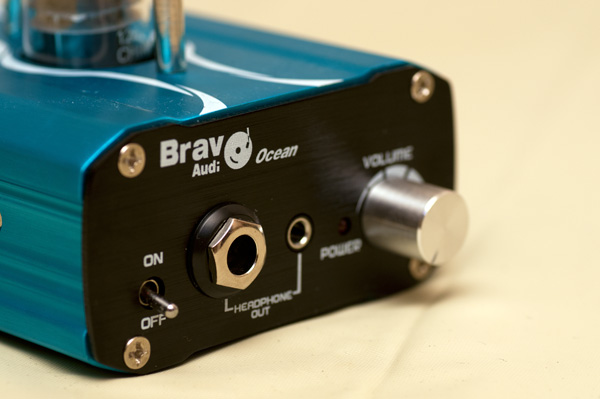 The Ocean does mids better in my humble opinion. Whilst it does not have the EQ options of the V3 it has more sparkle across the range without losing any of the weight at the bottom. The clarity in the vocal presentations are excellent at this price point and makes the FiiO E9/E7 sq sound positively grainy and arid. The Ocean, of course, sports the 12AU7 tube and if one remembers Don’s review on the V1 and V2 he felt this was the superior tube if mids and vocal are important to you. Don’t get me wrong, the v3 is not an inferior amp to the Ocean – it just appeals more to bassheads even with the passive EQ. The Ocean for me is the more flexible amp, be it rock, dance or vocal it handles with more assurance. It is still a tube warm and liquid amp and doesn’t quite have the edge and clarity at the top end like many more refined tube amps but at $110 you shouldn’t complain too much because at this price point there is nothing tube wise that can touch it.

So which one to choose? My money is on the Ocean as the amp for those with a wide variety of tastes and dig a warm retro tube sound. If your an uber basshead the V3 is going to be more in line with your tastes and the passive eq and looks give it great appeal. Both are budget-friendly and both have great power on tap for just about every headphone out there outside of the power-hungry flagship planers. Modders will love them also for the easy access to the caps and rollers are going to enjoy swapping out those tubes for little or no cost.

What’s not to enjoy about these budget tube amps??

Bravo Audio can be contacted at www.bravoaudio.com

Distributors can be found at: