Aside from the pre-loaded Google official browser, Honeycomb also supports a healthy number of other web-centric apps you can get your hands on. Alternative browsers such as Dolphin HD and Opera Mobile 11 have their own unique twist to internet browsing; the former uses extensive plugins and gestures for navigation, while the latter has far better Javascript optimization and the famous Speed Dial homepage. Some apps like Read It Later will help in saving one precious data by saving webpages for offline viewing; others provide specific web content like the official apps for Engadget, CNET, and more. And while the official social networking apps can run on tablets, their layout is focused more on phones, so 3rd-party programs come into play. Apps such as FriendMe make use of Honeycomb’s fragments and panels, while TweetComb is a Twitter client engineered specifically for the larger resolution with an improved format. 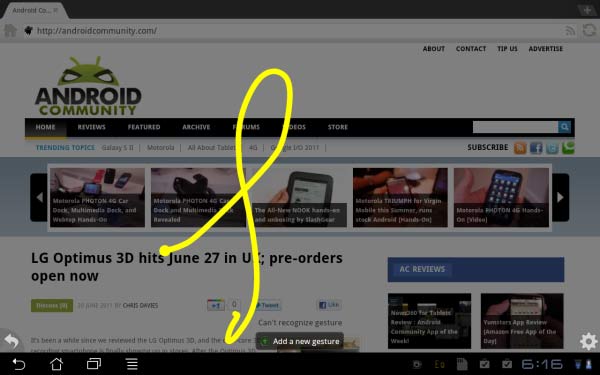 For reading applications, there’s Amazon Kindle, Kobo eBooks and Barnes & Noble Nook for those who want better features for e-reading. These apps sync seamlessly with Amazon’s, Kobo’s and B&N’s own e-book stores. Offline viewing is also possible on Android, with support for epub, oeb, fb2 etc. formats through FBReader, Moon+ Reader, and more. Most of these apps support features like night mode, bookmarking, and even text-to-speech functionality. For webzine applications, Android has quite a handful; these can be either subscription-based or freely synchronized across various sources. The ASUS Transformer has some built-in like Zinio that offers magazines available within its service, and PressReader which brings in full newspaper issues from multiple countries such as L.A. Times, Philippine Daily Inquirer, Bangkok Post, and more. Others, such as Comics and Mango, cater more niche audiences – specifically Western comic and Japanese manga readers. 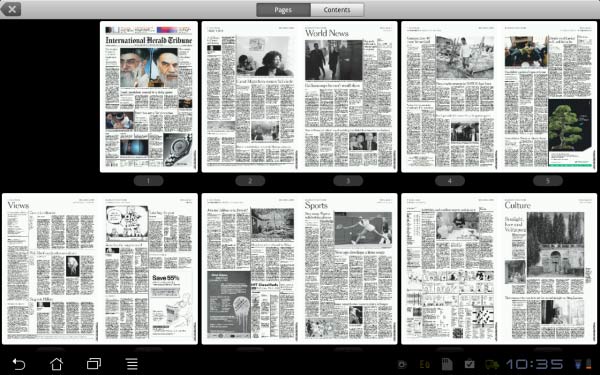 PressReader offers a subscription model for all available newspaper sources across nearly 100 countries.

Of course, there other apps that I could list to be in the “cool” category, because frankly they are quite awesome (and no, not fart apps) to own. Great apps to get include are ScoreMobile and Adidas miCoach for sports buffs, while ChordBot and Cleartune are obvious choices for musicians with their robust tweaking and tuning system. Augmented-reality apps such as Google Goggles and Layar utilize GPS and onboard camera for users to explore more of the world with layers like weather, store locations, pricing info, etcetera. Want something from the net and get it to local storage? Android has you covered; jetVD (remember JetAudio?) allows downloading of Youtube videos up to HD 720p resolution, and tTorrent is a client that turns an Android device to a torrent machine. Anyone who wishes to use anything other than the stock keyboard can download alternatives like Swype, Thumb Keyboard (great for tablets), Perfect Keyboard, SwiftKey, and more.

The ASUS Transformer is not only great for media consumption, but also for more work-related applications. For avid note-takers, Catch Notes and Evernote provide quick and easy publishing of notes and support tagging of images, video and audio recordings. There are four major Office alternatives for those who want editing Word/Powerpoint/Excel data – QuickOffice, Polaris (included with the tablet), Office Suite, and DocumentsToGo. These provide full access and control over most content, but these are still mobile apps so not all may be correctly formatted like some charts and formulas; however, these still excel in basic/medium-usage editing of documents. When I tested Polaris out on my school documents, all seem to work properly and given enough time, I could be used to editing them within the tablet and using the soft keyboard. 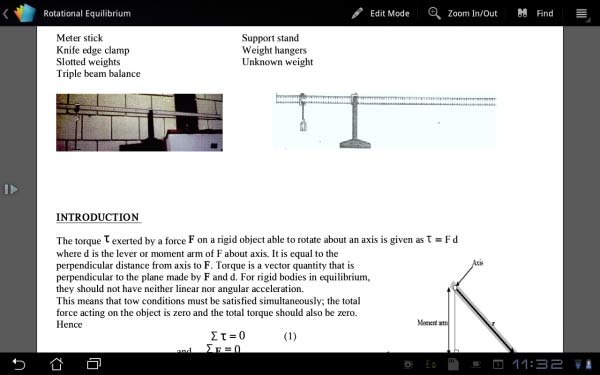 The Transformer includes Polaris Office, arguably the best Office alternative out of the four. It has the most correct format and layout of any presented document, and it features better editing tools.

Other productivity apps fulfill some specific or niche category of work or study. Some mathematics tools include RealCalc Scientific Calculator, RpnCalc Financial and ElectroDroid for electronics applications. Google Body is a must-have for people studying anatomy and physiology, while Google Earth is a choice for exploring more on the world at large. Autodesk’s SketchBook Mobile is a prime example of a tablet-optimized drawing and artwork app. For more corporate and web usage, there’s Citrix Receiver, 2X RDP/Remote Desktop, Splashtop HD, among others. Dropbox is still a favorite among users who want to sync data and media in the cloud, while Lookout Mobile Security is an all-in-one tool for malware protection, securing data in the tablet as well as finding the device in question through GPS signaling. 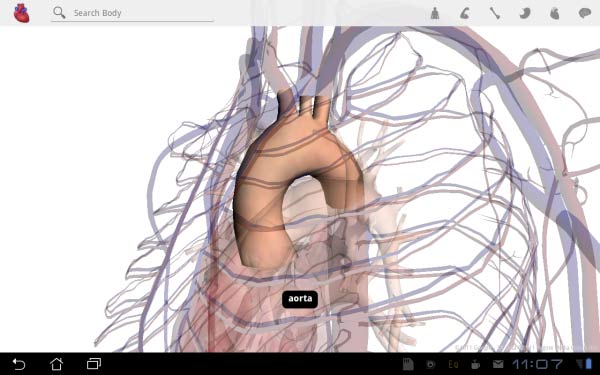