So far, what I’ve showed you are the characteristics of the ASUS Transformer, and the bone-stock Honeycomb OS in general. But of course, the overall value of the device will be dictated by its real-world performance and the availability of topnotch apps. In truth, there are a lot of apps that showcase the prowess of Android tablets today – and many more will come as their popularity grows. Multitudes of applications, both exclusive and multiplatform, have already made into the Market and received critical acclaim. And of course, the Transformer executes most of these smoothly and effortlessly; however, some of them are admittedly not yet ready for the Honeycomb ecosystem. Without further ado, here is a collection of top apps – categorized according to usage and interest.

Besides the incredibly seamless Google Music official app, there are tons of 3rd-party music apps out there that attempt to differentiate from one another. There’s DoubleTwist that allows over-the-air syncing of media from a client to a receiving Android device, while PowerAMP boasts topnotch sound quality as well as a robust equalizer system. UberMusic has the unparalleled smoothness and minimalism with its Zune-like UI, and Winamp is a favorite among users of the desktop version and syncs well with internet radio broadcasts. These apps mostly work on tablets, showing correct music ID and album art, others even effortlessly find music throughout the filesystem. However, some have not yet optimized their UI to take advantage of the larger screen – Winamp’s Now Playing screen for example has an unusually large progress bar on landscape mode. 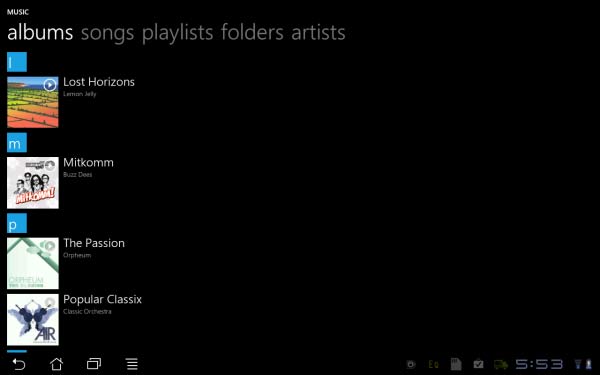 UberMusic emulates the Windows Phone 7 interface, right down to the very transitions and animations.

In terms of dedicated internet radio, Pandora, Winamp’s SHOUTCast and other similar apps are available – these stream music and podcasts from a favorites list tied to an account. Syncing is smooth and hassle-free, as long as a decent data connection is available. Other radio apps successfully use one’s location to find and broadcast local radio broadcasts, while some exceptional ones (like my favorite TuneIn Radio) connect to all available radio stations everywhere – yes, even Philippine’s very own. Still others found on the Market are mostly individual apps for a specific radio station, which are cool if one’s into a particular station but they’re simply not universal enough for my tastes. 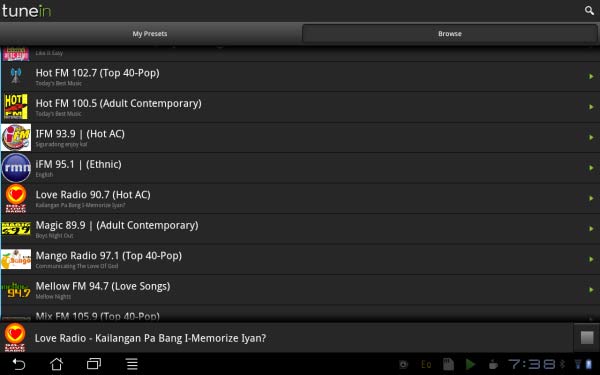 The default video app incroporated in the Gallery is pretty much enough for most codecs, like MKV, MP4 and WMV files. However, there are others available which employ a much more functional UI than the barebones default one. RockPlayer has been the favorite for decoding even more codecs and containers, while MoboPlayer does a fine job displaying videos in a Coverflow-like presentation and could choose between subtitles and audio tracks embedded within. Others such as VLC Direct and VPlayer stream videos to and from a client PC; a word of caution though, these services are data-heavy and could even slow down a Tegra 2 device while re-encoding videos to a playable format. These apps definitely improve the tablet’s status as a full-on multimedia machine, able to play back movies and shows in outstanding quality and both from local and internet sources. 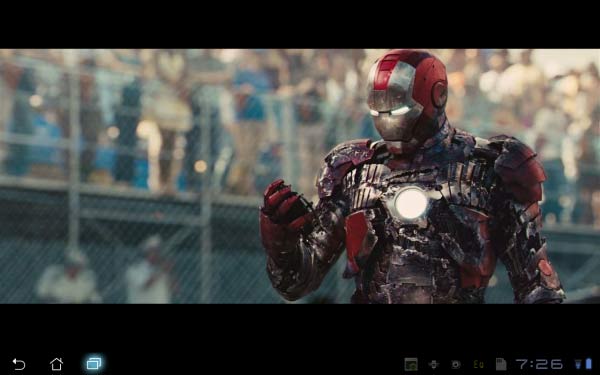 The default video player does well on most codecs.

If there is one category of apps that could really showcase what Honeycomb is capable of, it’s got to be the plethora of news aggregators available for Android. Most of the top apps for the platform belong to this group, and I could see why they are lauded by thousands of users. The variety and quality of such apps are astounding; there’s Pulse that brilliantly makes use of screen estate to list news in interactive thumbnails, and there’s Feedly which displays RSS articles in a minimalistic journal format. Tablet-optimized versions like The Daily Habit and CNN make excellent layouts for viewing articles and videos. News360 probably has the best implementation of Honeycomb so far; it uses its famed 360 format to smoothly display news in the form of free-flowing layers of pictures, and its article viewer makes use of different panels and tabs for reading topics across numerous sources. Reading more will take one to an in-house web browser that displays the full webpage of the selected article. 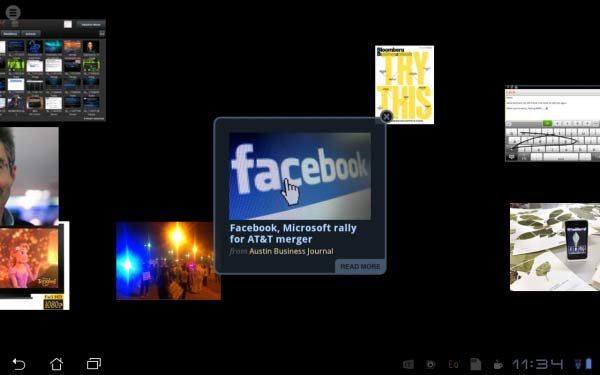 While these apps are developed by some top-dog media partners, there are also great ones created by individuals or small teams of indie developers. JustReader for example is a powerful RSS reader that could synchronize one’s Google Reader preferences as well as save articles and podcasts for offline use; this is done by a Russian developer, and is constantly praised for his quick responses and timely updates. Minimal Reader Pro is done by an XDA-Developers member, who had released the widget to the forums while it was in Beta, and was further improved as it was finally published in the Market. This shows how Google’s open-source approach into developing and publishing apps shines through; even lone devs can create astounding work for the community – and most of them do not charge at all for their products.