OK, so I got these a while back direct from Aiaiai I have been playing them solidly for a while now alongside the original TMA-1 and just for kicks the Fools Gold edition of the TMA-1.

When the original TMA-1 came out it was love at first sight for me. The perfectly tuned dance-centric DJ headphone by Swedish fashion masters, Aiaiai was a home run, a hit and a cult classic in almost the bat of an eyelid. Just about everyone who heard them thought very cool and very classy.

It was pitched right in there with the venerable but aging HD25-1 II from Sennheiser and the budget-busting ATH M-50 and frankly, in my opinion, outdid them both for style and usage points. There maybe one or two who prefer the top end sparkle of the M50 or the rugged legacy of the HD25 but as it stands right now not many can beat the TMA-1 for what it was designed for and how it sounds in its key genre of dance.

So that is that then right? Well, not quite because such was the indie hit of the TMA-1 combined with the fashion legacy of Aiaiai that invariably versions of the original started popping up such as the Fools Gold edition, and the Beatport Edition.

Now we have this Studio Edition which is perhaps more of a departure than the fashioned tweaked ones. The Studio edition takes the original design and tweaks them primarily for the studio DJ / dance or house producer who required a touch more fidelity than when gigging in the clubs. 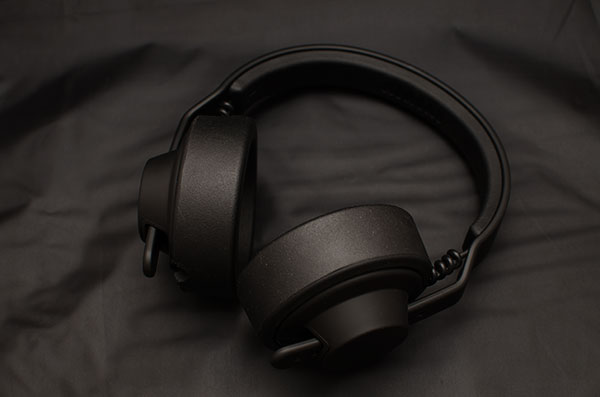 The Studio Edition is aimed primarily, no surprises here, at the Studio DJ, the house mixer or the producer. Keep in mind the original TMA-1 only shone with Dance genres then your in the same field as the Studio in terms of type of mixing that you might want to apply these headphones to.

With that comes some key differences and if you are used to the sound of the original you may be in for a surprise if you think it is more of the same only bigger and better. This is a very different headphone sonically in many respects.

Until you set it beside the original TMA-1, the Studio actually looks much the same with its clean-cut lines and super flexible black plastic molding. This Scandinavian design ethic really works so well on headphones and I don’t know why anyone didn’t try this a long time ago.

Now, most of the Scandinavian companies are imitating this successful blueprint in their new designs such as Urbanears with their excellent Zinken and on a much cheaper scale the Coloud Knock and Boom cans (same company as Urbanears if you do your research).

These are incredibly rugged and durable even pitched against the aging tank that is the Sennheiser HD25-1 ii they just seem much assuring in your hand that if dropped nothing ill will come of them. 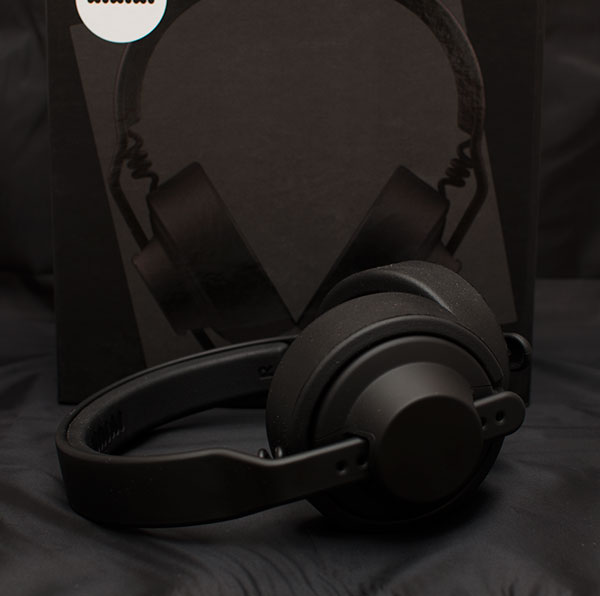 This time Aiaiai has changed the pads and you will notice this is the biggest physical change when you pop them out of that oh so nice packaging. The pads are bigger this time than the TMA-1. Instead of on-ear, we have an over-the-ear cup design with two detachable pads – a PU foam Grado type bowl pad and a protein leather earpad.

Both have their pros and cons and both change the dynamic of the listening experience considerably according to some FR charts done on the two pads.

Comfort-wise I preferred the PU foam bowls myself but I am an ex-Grado guy so for those without the Grado experience or don’t like this ‘styling’ the protein leather pads are pretty comfortable. Also, those have slightly less sealing potential. I did find the clamp on the head to be superior to the original TMA-1 which was a bit loose compared to the clamp of death experience of the HD25-1 ii. 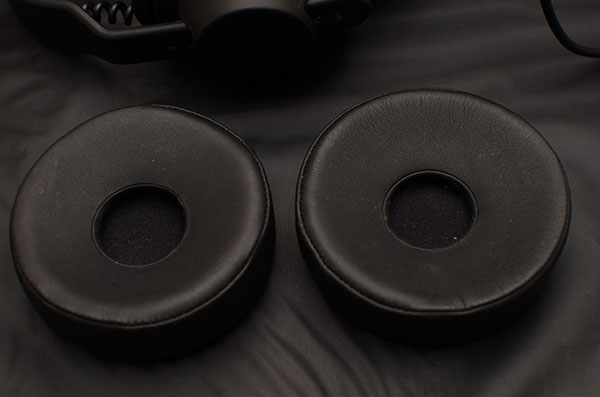 There are another few more subtle changes that are a continuation of the limited edition regular TMA-1’s.

The cables are now ‘lock and load’ instead of just insert which was an iteration of the Fools Gold Edition and probably welcome for those who move around a lot. There is still a straight (mic controlled) and curly-tailed cable package.

The quarter jack still screws on and off but this time on an angled termination 3.5mm plug rather than a straight one. The Studio edition comes in a nice sleek soft cloth pouch much like the original TMA-1 but this time in black. 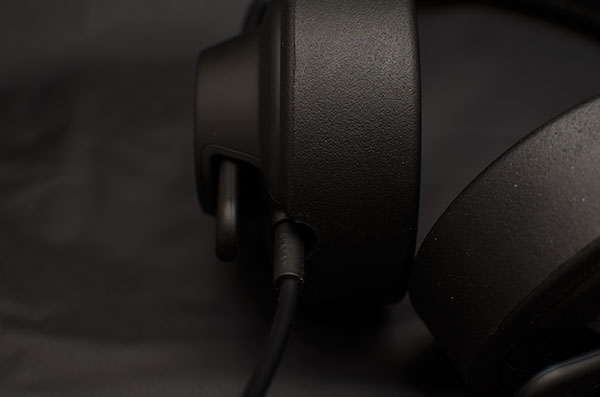 At the time of receiving the pads had some QC issues with some glue resin not holding it all together and sure enough, my edition had that glue issue. Not a big problem with some Unibond glue all was well again and I believe Aiaiai have now cleared that up quickly so I highly doubt anyone is now experiencing that problem if they go to buy them.

Now honestly if you expecting the TMA-1 Studio Edition to sound like a bigger original TMA-1 then sadly you are going to be very disappointed. I trawled through a lot of feedback already on the Studio and honestly, most of the negativity is coming from a few different directions.

Importantly they all came loaded with so many preconceived notions that it was either going to be bassier than the TMA-1, a monitoring dream for the studio mixer or a neutral listeners dream minimalist headphone.

The truth be told its really none of these with any sense of conviction so clear your mind of expectation. In fact better yet don’t call it a TMA-1, just call it a new headphone from Aiaiai and see if you like it or not.

Those who initially rushed out to buy this are certainly going to be lovers of the original slamming dark attenuated treble TMA-1’s but there lies the paradox – this TMA-1 is not likely to be for you, the original TMA-1 fan unless you just want the design aspect.

The guys in my local headphones meet all came out with the same response – oh its kind of boring compared to the original TMA-1, lacks slam they say or sounds very flat. 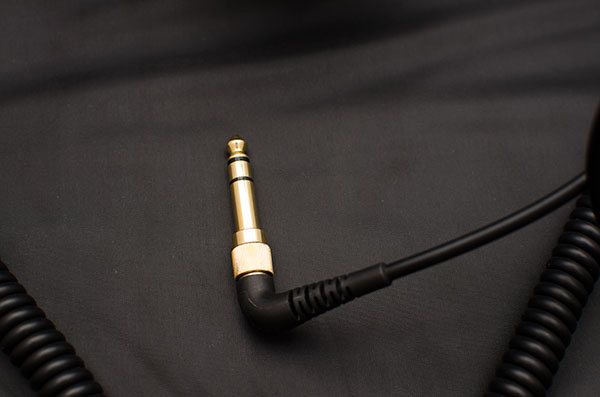 In truth, they are right in some ways. The Studio is a more neutral and flatter headphone in terms of reproduction than the TMA-1. This is in context though because for neutral heads this is still a dark headphone so don’t expect this to compete either with say a Tesla driver or a Shure SRH series headphone in terms of transparency and top-end articulation.

But it is a more flexible headphone than the original TMA-1 with slightly more extended highs, more detail, and more articulation and not quite as dark.

The sound stage on the Studio is more open than the TMA-1 also but not airy and expansive like some closed can miracles such as the AKG K550 but in context of the first generation TMA-1 a big improvement with snappier imaging and better separation.

The Studio does benefit from a much more evolved mid-range than the original TMA-1, outside of a slight bit of bleed from the bass into the mid-range, I found this increased mid-range to give the Studio a definite edge over the TMA-1 for vocal work and certainly any dance genres with vocals had much better clarity than the older TMA-1. 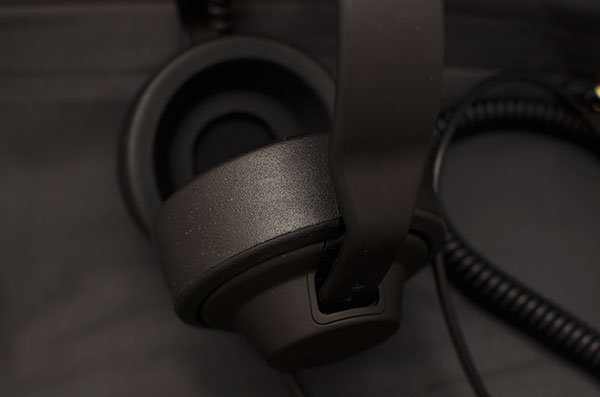 Looking at some FR charts there is at least a 10db gain on the bass of the original TMA-1 over the Studio with a smaller 5DB difference on the upper bass region around 100mhZ which explains why a lot feel the Studio lacks substantial bass compared to the original TMA-1.

Bluntly speaking the old TMA-1 will simply sound a lot more exciting to the bass head fraternity. But it does have good reach and it doesn’t feel it lacks bass particularly when it comes to the home territories of bass-centric music.

It just isn’t in your face as much allowing the mids a bit more space to breathe and give vocals more prominence than previous. The top end is not quite as shelved down as the older TMA-1 either but certainly doesn’t have that airy sparkle on say an ATH M50’s treble reproduction. In context again the Studio treble to me is simply better than the original TMA-1’s attenuated treble reproduction.

Amping wise those this is a breeze to drive on most DAPs and amps. I ran this specifically through a fairly neutral setup with the Triad Audio L3 and my Meridian 506 CDP which is know for being fairly transparent and honest in reproduction. It might be overkill for a $250 headphone but I was anxious to avoid any coloration and control the bass a bit better through the L3.

The bass tweak on the L3 did help considerably as did the treble tweak on the E09/E17 so those who wish to mess around a little might be pleased to hear that. I wouldn’t match this with a dark amp though if you can avoid that so much the better.

Something more neutral with added bass tweaking might be a good choice or a really good DAP with plenty of EQ options such as the Cowon X7 or the DX100 from Ibasso. The Hifiman range might be too warm for the Studio and stay away from the C&C X02 which will put you into full-on night mode since it is already a very dark amp, to begin with.

I actually found the PU foam bowls to be a better experience than the protein leather pads. The seal was good and the bass a bit deeper and the whole experience more aggressive and club-like than the more on-ear muted pleather pads which for me lost a bit of weight and depth when used.

The puzzling aspect to this though is this really a Studio headphone for dance producers and mixers or simply a re-tuned TMA-1 for those who don’t want the whole experience to be so dark and bass orientated?

The commitment to go full out studio doesn’t feel quite there yet it also should not be considered simply a bigger TMA-1. This is not a neutral headphone but it is a more mature and agile headphone than the TMA-1.

It does still have its roots firmly in the dance and DJ genre for it to be at its best but it does perform better than the TMA-1 on other genres with careful matching and tweaking. 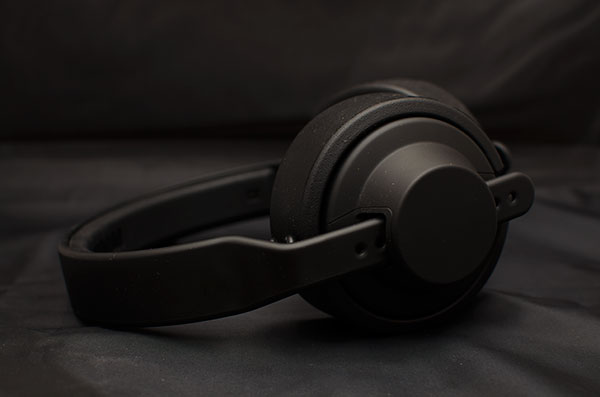 It still retains all the physical qualities that made the TMA-1 such a robust and attractive headphone and I do not see any reason why it cannot do a great job in a booth in a club.

Is it a better headphone than the TMA-1? Oh, tough question, to be honest, some will say yes, some will say no. Its cleaner, more articulate and a bigger sound but at the cost of some bass impact and excitement. It makes you wonder why to call it a TMA-1 in the first place since those preconceptions are very strong as to what it may have been rather than what it is.

Notes on the review: