The F2 was part of that original creative process Piotr did with the FIBAE 1. Hence, it came out “green” as he felt I lacked substantive green”ess” in my life. Clearly, a Polish CIEM agenda as Lime Ears did the same thing. Hit me up and let me know if Poland loves green, I think they do.

That being said I actually like this design a little more than the F1. It is not obvious how subtle the design actually is until I started taking pictures of it and zooming in to see the little mesh details and the smoky finish to one side as a lovely contrast to the more transparent green on the other side.

There are no “premium” faceplates on this one but to be honest I don’t think it needs it. I am big into fusion colors of late and this one is a nice take on it.

Much like the FIBAE 1 the FIBAE 2 was constructed with a hollow body acrylic shell. The feel is similar though the F2 has slightly a slightly weightier feel with the dual BA inside as opposed to a single BA of the F1.

You can, of course, get a silicone version but I am unsure if this design is workable beyond acrylic. Suffice to say, much like the F1, the finish is excellent. The shells are clean, bubble free and the lacquer coating is very smooth. 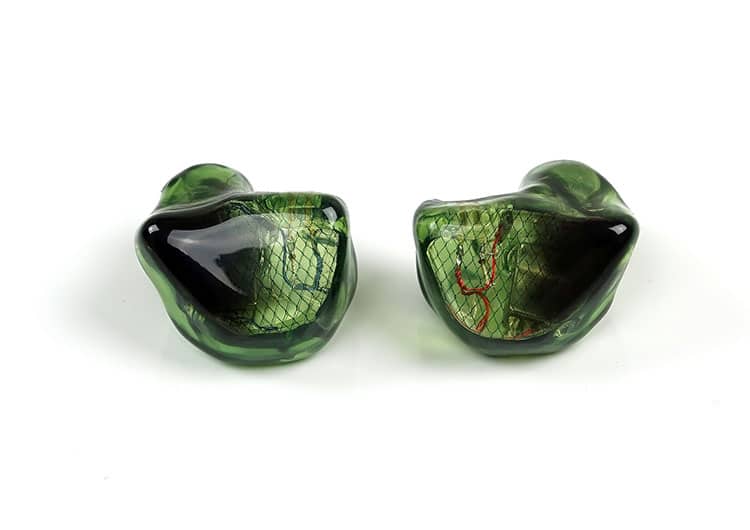 Though the shell is not as transparent as the FIBAE 1 the cabling and armature alignment is fairly easy to make out. With a dual balanced armature design, there is a little bit more going on the inside of the F2 compared to the F1.

The F2 still uses the Knowles 33357 proprietary driver custom tuned for the FIBAE IEM range as its mid to high driver. However, for the low-end, it uses a Knowles CI series 22955 which is just about the biggest and more powerful BA that Knowles currently produce. It is this driver that adds a lot of the bass goodness to the F2’s tonality.

The placement of the top end BA (mid to high) is similar to the F1 as in right above the nozzle. The low-end bass armature is much bigger and further back in the shell. It is angled towards the nozzle to allow for a cleaner tube to nozzle design. You can see both tubes run parallel to each other to the tip.

The nozzle design itself is a more traditional dual bore configuration, unlike the F1 which was a single tube into that inverted cone type single bore. Both tubes run flush with the top of the nozzle rather than slightly recessed opening on the F1.

Much like the F1, the FIBAE 2 uses some red and blue wiring for left and right driver designs, which I like. There is more than a single wire this time though so on closer inspection I see a secondary white wire tucked away under the colored ones. 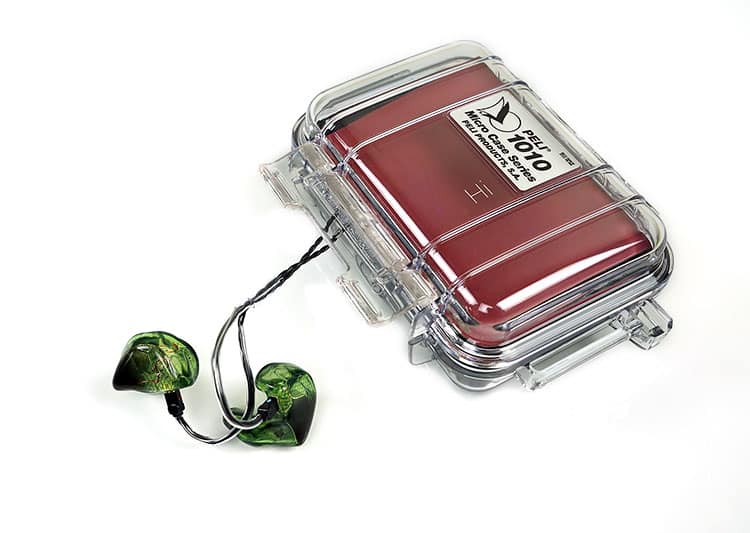 The FIBAE 2, much like the entire FIBAE range, does offer a range of connection choices. However, the silicone version is slightly more restrictive in connector choices due to the nature of the materials being used.

You can elect to go with a standard flat socket 0.78mm 2-pin cable but you cannot select MMCX. Nor can you choose a recessed socket in silicone. I presume the pressure applied to a dropped socket design could break the silicone shell a bit quicker than it would on a stiffer acrylic socket.

The cable choice is the same as the FIBAE 1.  This is a Plastics One cable design to get you going out of the box. I don’t have any issues with this cable, particularly at this price point. It ticks all the boxes in terms of being light, pliant and just the right length for portable use (1.2m). I am presuming this is a 4 core copper wire cable and the sound signature suggests it is a bit but it is not overly warm as some other variants.

Upgrading the cable on the FIBAE 2 to something like an SPC 8 core variant will give you a nice boost in dynamics with a more holographic quality to the staging and a touch more top end sparkle. Something worth considering if you find the stock cable a bit too relaxed.

The cable is terminated with a right angle 3.5m gold-plated stereo jack on one end and finished with the usual 2-pin connectors on the other with left and right markings. The cable does have good memory hook materials. They are a little on the thick side but they retain their shape very well. Note this cable, as in all cables for the FIBAE 2 is designed to be worn over the ear.

The FIBAE 2 was cut from the same mold as the FIBAE 1 so the fit is excellent and very comfortable. The nozzle is reasonably long or a pro-fit as I like to call it so it stays fairly secure during energetic movement.

Background noise is nil, isolation is full on. Zero dynamic drivers mean zero venting ports so it is as good as it gets for the seal. CA did a great job with zero gaps either open or closed jaw and no uneven pressure points. Credit to the audiologist I guess I can’t take away from the fact a great ear mold will help immensely.

The Model X build and fit is a little wider in the nozzle with a bit more left and right sided pressure than the FIBAE 2 which has more top and bottom. For some reason, either accuracy or build methods, the FIBAE 2 felt a little more relaxed and comfortable.

The Model X body behind the nozzle is actually not quite as curved as the FIBAE 2 so this may be where some of that pressure is forming. Again, much of this will come down to the quality of the mold however the X would be my choice is I was doing anything really active. The F2 would be for really long listening sessions or a more relaxed choice.

M-FIdelity have nowhere near the same level of creativity or choice in designs but what they do excel in is fitting. To date, I still rate the SA-43 in my top 3 builds for depth and accuracy.

It is indeed deeper than the FIBAE 2 and purposefully so. However, the nozzle is super accurate despite the length so it does not apply the same levels of pressure as the Model X in the canal. The F2 is on par for accuracy but a little shorter with a more relaxed fitting.

The BD4.2 is a comfortable build and the nozzle is the same length as the FIBAE 2. However, the hybrid nature of the BD4.2 means the body is huge and sticks way out of your ear. It also has a venting port for the dynamic driver and you will get far less isolation compared to the FIBAE 2’s BA seal. It is comfy though, just a lot bigger. 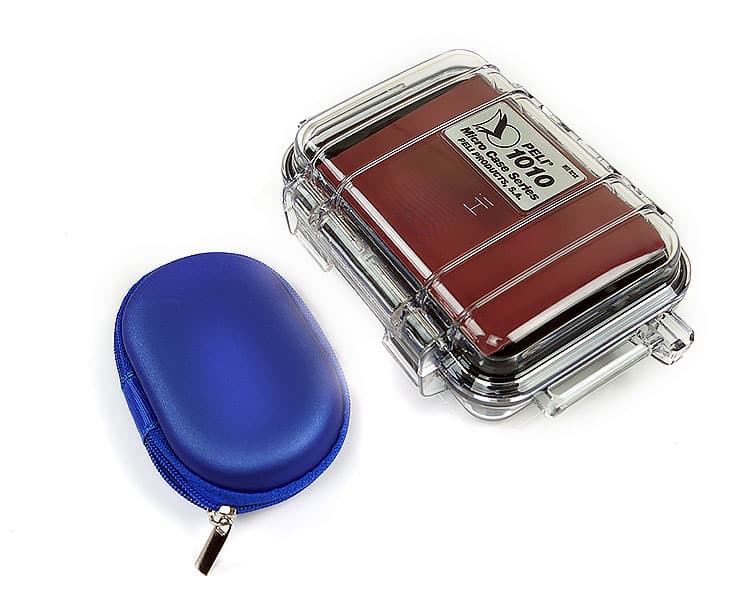 In a way, the FIBAE 2 is the HD650 to the FIBAE 1’s HD600, at least on a general tonal quality with the stock cable. Out goes the more neutral mid-centric delivery and in comes a blend of that quick pacey BA-driven top end and more emphasized and fuller sounding low-end.

This is a smoother and more weighted delivery with more of a bass to lower-midrange focus and as such presents a bit more depth and power than the FIBAE 1 which bodes well for those who like their arena genres and anything that relies on solid bass fundamentals.

It sort of reminds a little of the original Harmony 8 in terms of presentation with a slightly darker sound than the FIBAE 1 and an injection of low-end warmth. This partly due to far less lower-treble emphasis than the FIBAE 1. Overall, I find the FIBAE 2 a very easy going with just enough upper treble and vocal elevation to prevent it sounding overly veiled.

Changing the cable is the best thing you can do for the FIBAE 2. I highly recommend an SPC or silver Litz of any brand. Something that delivers excellent dynamic range improvements and brings a bit more energy to the top-end. Effect Audio’s Thor II or PW Audio’s The Flash are two cables I tried and the benefits were night and day over stock. Granted, it costs a bit more but I think it is worth it.

That slight veil on the upper mids and lower treble from the stock cable was lifted and replaced by a more spacious and holographic sound with a lot more energy. This is the sound I heard and loved at CanJam Singapore. It remains highly musical but the clarity is much improved with better treble contrast and generally a more articulate sound.

The low-end response of the FIBAE 2 is far more planted and fuller sounding than the FIBAE 1. Out goes the gentle and subtle mid-bass lift of the smaller FIBAE 1 bass and in comes a more elevated and stronger response from around 30-100Hz. I would hazard a guess of around 6-8dB increase with the elevation beginning around 30Hz and a primary focus around 80-100Hz before falling away.

As such, this is still not a sub-bass beast though the power and presence are more palatable than the linear and more subdued FIBAE 1. You will get a meatier and fuller sound on the FIBAE 2 that will suit beat-centric genres.

From 100Hz its a slower drop to the lower mids than the FIBAE 1, bottoming out around 800Hz-1k. As such it brings a bit more warmth and fullness to the upper bass and lower mids than the flatter sounding FIBAE 1. It is not a bloated sound, there is enough dip to retain good levels of clarity, particularly with a good cable. However, the lower-pitched instrumental timbre will sound warmer and richer as a result.

Lower mids on the FIBAE 2 are more prominent and weighted sounding than the FIBAE 1. 500Hz to 800Hz is still delivering a bit of that mid-bass glow so instrumental timbre will retain a richness and warmth that I like for rhythm guitar work with a bit of authority.

It doesn’t have the clean edge of the FIBAE 1 mids though, it is a little softer sounding than that. If you are after a precise and clear delivery of acoustics, and smaller stringed instruments the F1 is the tool for you. Instead, the focus on the F2 is that of a fun signature with a bit more power and depth.

There is a slight lift around 1-2k for vocals which is a difference-maker for the F2 for me preventing it from becoming full-on dark or veiled sounding. There is a still a slight dominance of the low-end but the lift brings pretty much most vocals, especial mid-pitched female vocals into a bit more focus. You start to think that its a little “W” shaped in that regard.

Upper mids to lower treble on the F2 is a little muted, especially with the stock cable. With the stock you get a loss of snap and generally a very subdued tone especially for percussive passages. The sparkle comes back with a better cable.

It still is not what I would call a forward sounding top-end. In fact, it is rather relaxed from around 3-5k. There is some energy from 5-7k that delivers a bit of welcome sparkle and air but it sits relatively neutral in comparison to the mid-bass and 1-2k lift so it is a bit subtle.

One big change from the FIBAE 1 is the extension in the final octave. Simply put, the FIBAE 2 has the better extension and sounds a little more articulate right at the very top with a touch more headroom as a result. I got a better sense of energy around the 10k marker on the FIBAE 2 than I did on the FIBAE 1.