The rumors are indeed very true in that the Dharma is kind of a one-note bass end experience: something that doesn’t offer much in the way of responsiveness to EQ and remains the same in texture and quantity for the most part no matter what you do or listen to.  It is one of the least responsive Summit level headphones with regard to bass that I’ve come across in a while.  But, that isn’t really important for me.  The headphone still has plentiful, solid and pure bass enough to satisfy me.  However, it just doesn’t want to change when I drop or increase the EQ on the low end through any of my sources.

The community calls this type of a lack of responsiveness “one note” and I think it is a fitting title.  Despite that and for the most part, the Dharma gets the job done on the low end and definitely does a better job with bass in general than my HD800.  I rate these two headphones as equals for bass purity, but the Dharma wins out with the quantity award without question.  It isn’t a bass head model, but it doesn’t leave me craving more as my HD800 always does.  I’d call this bass moderate in quantity and of a very good quality.

The headphone does well with most genres, but you can hear the lack of responsiveness with certain tracks like Bassgasm from Techmaster.  I highly recommend you test that track out in .Flac and see for yourself how poorly the Dharma responds to very low bass frequencies and how unstable everything ends up feeling.  Ugly is a light term I’d use to describe the Dharma’s bass responsiveness to that type of an extreme bass track.  For casual listening and for those who do not listen to bass best tones or extreme bass quantity tracks, you’ll be fine.  But, if you like Techmaster and similar groups that incorporate extreme bass depth and quantity, this is not the headphone you want to use.

Sadly, the Dharma responds to those types of tracks with a ton of bass with a D- rating: very poorly, but not a complete failure.  For everything else, it scores high and that really strikes me as odd.   The HD800 and AKG K812 retain control on those super bass tracks I’ve tested with, but the Dharma sounds like it blows out quickly and like something is wrong once you get to a certain frequency area on the low end of things.  What a shame, my $55 OnePlus Icon IEMs completely destroy the $1190 Dharma in bass responsiveness and depth.  Those cheap little IEMs keep control, quantity and detail all while never sounding like the driver is fluttering or watery.  The Dharma…does not fair as nicely.  Ouch.   But again, that is only for the destructively low areas of bass tracks.  95% of the time, the Dharma sounds nice and you’ll never notice any problems with it.

If you enjoy the Stax 007 or the feel of the lower end Stax electrostatic models out there, you’ll enjoy the Dharma.  I think these guys have produced a very slick and effortless sounding midrange in their Dharma and that is something I never expected.  Hybrid or not, the idea of getting that type of smoothness in something that isn’t totally an electrostatic seems a bit too fictional, but they’ve done a good job at replicating that yumminess and creaminess of most static headphone’s midranges.  If we are to compare raw clarity to anything, I think it is just about half a step behind the HD800 in overall purity.  It exceeds the T1 and the AKG K812, even the N90Q that I’ve recently reviewed from Harman.

There is no denying the Dharma offers Summit level clarity, but if I am paying $1190 for a headphone…I’d rather just invest another $200 or so into a used Stax 007.  This poses a serious problem for buyers who want the electrostatic sound, but do not want to break the bank.  Overall, the 007 is the superior headphone, although you’ll be spending at least another $400 on top of things with a required electrostatic amplifier if you go the Stax route.

To be honest, it is worth it to go that route instead of the Dharma if you’ve the cash to blow on it.  If not, you might be looking at one of the lower end Stax models with the amplifier in the budget of $1200 and under. The Dharma is probably the better route to take.  The Dharma also doesn’t require an electrostatic amplifier, so you can use your pick of a normal solid state or tube amp that one would pair with a dynamic or planar headphone.   But let’s be honest here, you are probably going to spend a at least $200 on cables and will probably buy a new amplifier that costs well over $400 if you buy this Dharma.  Ha.  Don’t lie to me, you know you want that expensive custom braided cables out there…you aren’t alone, I want them too.

While on the subject of amplifiers and due to the efficient nature of the Dharma, you don’t really need much amplification voltage to get a smooth midrange.  The tone of the amplifier is more important than power needs, as I’ve found high voltage in the 1.5watts and beyond ratings do nothing for the headphone…obviously.  I highly suggest you pick up a smooth amplifier or USB DAC with a decent power output though, maybe a Burson or the older Apex Glacier.  The reason for that is to pair the Dharma with an equally midrange bloomed source or amplifier in attempt to retain or even augment the Dharma’s fantastic midrange.

Under no circumstances would I be using a neutral (in physical placement lows, mids and treble) or flat sounding amplifier.   Due to the Dharma’s moderately forward sound signature with regard to vocals, I suggest you find a “vocalists” amplifier or USB DAC and never look back.  Enhancing things is the way to go for listeners like me, but the neutral purists will probably want to seek out amps and USB DAC’s that are neutral in both tone and physical setup: equal parts bass, mids and treble. 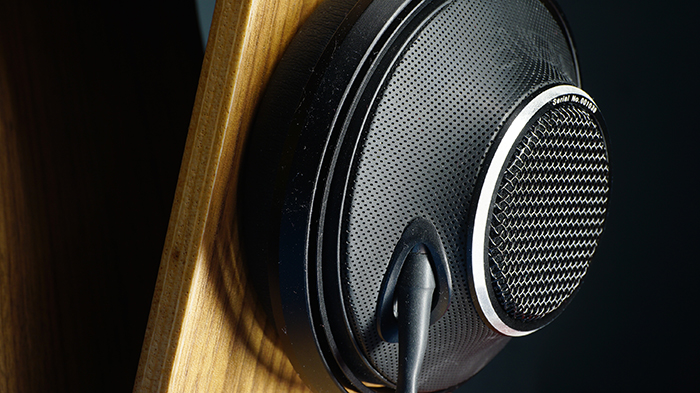 In my humbled opinion, the upper end sounds like what the HD800 offers on a very good amplifier, except the Dharma doesn’t need a good amplifier to achieve it.  Both sets retain similar physicality and styling, as well as clarity for the entire top end.  With that in mind, I’d say the Dharma is on the bright end of the spectrum and lacking softness just like the HD800.  I was hoping for a Stax level treble experience, but it seems like the Dharma shells out more of a typical dynamic driver tone and texture up top.  Disheartening, to say the very least.  If you want a more vivid and engaging top end, I think you’ll be more than happy with the somewhat bright but still enjoyable Dharma D1000.  However, if you want a creamy and laid back, but still vivid top end similar to the Stax 007…the Dharma isn’t for you.

Unlike the bass end, the Dharma’s treble is very responsive to EQ.  I am able to set a variety of presets for myself and can swap freely between them without causing a storm of haze.  Depending on the genre or even the track, the Dharma can sound somewhat sweet and plentiful, or even a bit harsh if the track happens to be recorded as such.  It seems like the Dharma’s top end has a lot to offer you and likely won’t bat an eye if you want more or less quantity.

I actually detect very little difference between the staging dynamics of my Stax 007 and this Dharma D1000.  However, I think the difference between the Dharma and the HD800 is still an unfair comparison to make.  Don’t expect HD800 masterclass imaging, but do expect 007 level depth of field and a much more concise and coherent, moderately forward sound signature.  There is an odd feeling when swapping on over to the HD800 after using the Dharma for a while, where the latter of the two sounds like a headphone should and where the HD800 sounds like an immaculate sounding megaphone.

The source locale of voices and instruments feels too far and distant inside the HD800, also too recessed even by comparison to the more engaging Dharma.  Height and width are good, but not great on the Dharma.  Depth of field is very good, but not quite up to par with the HD800.  All things considered, the Dharma offers a more than passable and enjoyable imaging experience that really doesn’t lack in any way that I can detect.  If I had to warrant a direct comparison, it feels more like the AKG K812 than anything else that I can recall.  I wouldn’t call this a sound stage titan, but I do feel okay calling it a well-rounded imaging headphone with very little to gripe about.

EnigmaAcoustics has crafted a fine headphone with almost nothing to complain over.  If not for the almost non-existent bass response to certain tracks, I’d have given it a higher score.  That lack of low end control and near instant loss of quality during tone tracks and Techmaster album tracks really hurts me on a personal level.  I love my bass, so I was upset to find the Dharma not at all setup for those who want to raise or drop the dB levels on their low end.  Beyond that, the build quality is of an excellent caliber, the mid-range and treble are prime quality for the price and the imaging is more than satisfactory.

Truly, the headphone world needs more models out there like this that push the boundaries of what is possible.  I want to see more boldness from other companies in the future, not the same stuff rehashed or re-released.  Where are the innovators and mad scientists?! We need those guys back in droves and it seems like only a few teams currently even exist in the audiophile world that are interested in making something new and fresh like this Dharma.  For $1190, I can’t possibly complain.  The price seems justified for what you get and I’ve actually enjoyed the headphone from day one through the penning of this review.  The same cannot be said for the HD800, which I repurchased just to compare to this Dharma and to use with my AiristAudio amplifier.  Sufficed to say, the HD800 has already been resold.  It is obsolete, unless you want massive sound stage of course.  The Dharma is the better-rounded of the two for genre selection and the clear winner for me overall.