The world of high end portable music players seems to be set up like a tiger pit with many companies vying for attention, the ultimate prize of which would be reigning over all others with an iron fist.  The DAP Wars of 2011-2015 really spouted off some serious contenders and upped the level of quality in the portable experience to fiercely competitive levels.  Can Luxury and Precision compete with the other big boy toy portable players?

Luxury and Precision – A brief rundown

The creators of this company originated with Colorfly and those who worked on the C4 and CK4 portable music players, both of which I’ve owned and reviewed in the past.  Back then, I wasn’t impressed with Colorfly in the slightest and gave the C4 low marks, so I am beyond elated to report that Luxury and Precision took what they learned from Colorfly’s shortcomings and improved their game.  Before continuing, I wanted to thank John Yang for bridging the gap between Luxury and Precision and I, what a great fella.  I wanted to say thank you for your always lightning fast response times and helpful incite, constant updates and overall stellar public relations capabilities.  You deserve accommodation for doing such a great job.

This DAP could very well offer one of the most hefty and solid constructions in a portable music player that I’ve ever experienced.  There also is little doubt in my mind that it is on the top end of the list when it comes to aesthetics and I’ll be damned if this isn’t one of the most beautiful exterior designs in a DAP that I’ve ever handled.

The rear plate is a thin cut of rosewood with aluminum surrounding the entire sides, top and bottom of the unit.  Well played, Luxury and Precision, taking what everyone loved about the C4 and bringing it over and into a more portable chassis.  The L5Pro also comes with a hard leather case that is custom cut to fit the player’s exterior measurements, thankfully it isn’t just a rectangle and that they’ve cut the leather to spec with the odd top area’s curves of the L5Pro’s design. 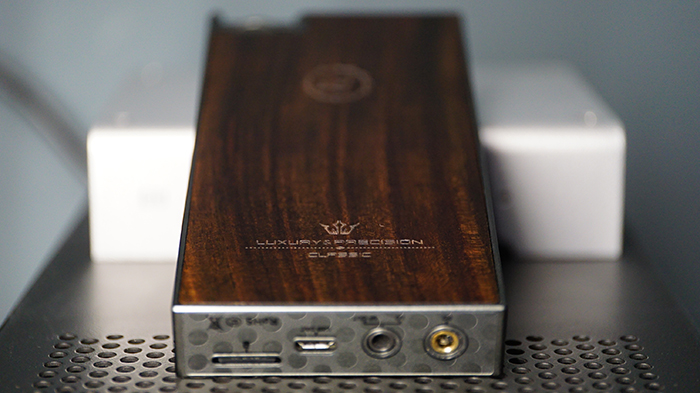 At the top of the unit lays the horizontally tuned volume knob, which feels plenty hefty on its own.  It isn’t exactly a precise piece for tuning loudness, but more on that later in the UI area of the review.  For what it is, it feels good and inspires a clash of retro and modern design.  I actually prefer manual control like this, opposed to the fully digital touch control for volume via current gen DAP’s, or even those with small one click button that most other DAP’s utilize.  3 preset hotkey buttons adorn the immediate left hand side to the volume knob, which are: screen off, custom hotkey 1 and custom hotkey 2. 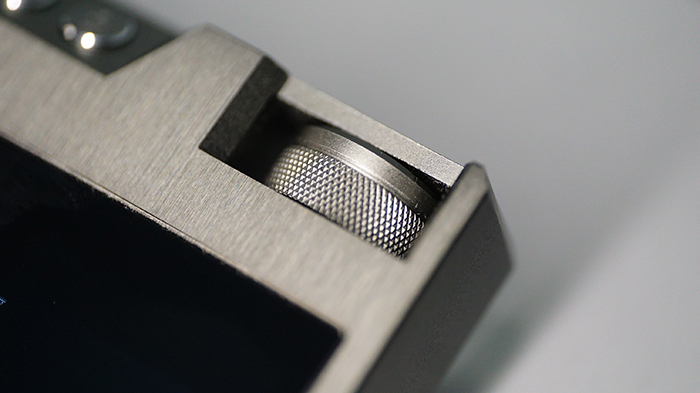 I must say, coming off the iBasso DX90 and the nightmare placement of its own screen off button (which is located underneath the protective case and on the units left side) the L5Pro has gifted me no bitterness when it comes to free form functionality and tactility.  I really hate having to flip over my DX90 case and thumb down the lock screen/screen off button while the unit is on, especially so when Rockbox’s UI is enabled.  With that active, the screen is more sensitive and I’ve often found myself fumbling menus and subsets that I don’t ever want to touch, menu’s that mess up the settings of the DX90 easily.  This isn’t a problem with the L5Pro and it is simple, little design elements like this that are well thought out that make me smile.

The L5Pro comes with 32gb onboard storage and only one micro SD slot.  I feel like for these prices that near a grand, DAP’s should be designing and taking a page off of Calyx’s M, which is a DAP that had onboard storage, a micro SD card slot AND a full size SD card slot.  I can’t complain, but it looks like iBasso’s new DX80 is one of few of the newer generation DAP’s to house a dual micro SD slot feature.  What a shame the L5Pro doesn’t also have that feature, darn.  For $809, Luxury and Precision should have opted for a full size SD card slot as well, as 512gb cards right now cost the same as 128gb micro SD cards and I’d much rather has the full size SD card in there than the currently overpriced 200gb Sansdisk micro SD card.

With that in mind, storage isn’t really a problem for me on a personal level until my .DSD collection comes into play.  Those with large amounts of DSD files in their lot are going to run out of space before they can blink, often times with 1gb+ albums in DSD64 file types.  Ouch, I am running into this problem at the moment and truly only the Calyx M is capable of saving me from being forced to make sacrifices and actually…oh jeez, dare I say it…manually picking and choosing albums to add or delete from my collection.  Good God, that brings me back to 12 years ago and having to be stuck with 50 songs on my Samsung Yepp player…nothing bothers me more than having to sift through gigabytes of my music collection and tell certain albums to walk the plank.  “No room for ya, matie.  Off with Ye!” 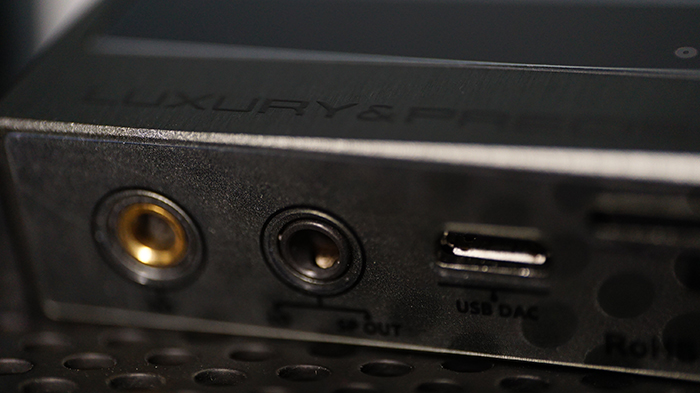 The L5Pro also has physical Play/Pause, Fast Forward/Track Forward and Reverse Track/Last Track buttons on the right side of the unit.  All the buttons feel of a solid quality without any plastic like feel, looseness or jiggle.  Truly, from top to bottom this L5Pro screams high quality on the front panel side, even more so on the gorgeous wooden rear plate area.  When the sun shines on this player’s rosewood back plate, I grow weak at the knee.  As most of you know, woodies are my Kryptonite and I simply find myself staring at the wood grain for no reason outside of how stunning it looks.  I get that the cut of wood might not be as thick as I some prefer it to be, but the weight of the player is already on the boarder of being too high for me.  For something so small, 195grams feels just right for that quality to actual heft ratio that most of us want: we really wouldn’t want something super heavy, nor would anyone want something that feels hallow at $809.  Thankfully, the L5Pro feels dense enough to justify itself and exudes high quality physicality in build materials used. 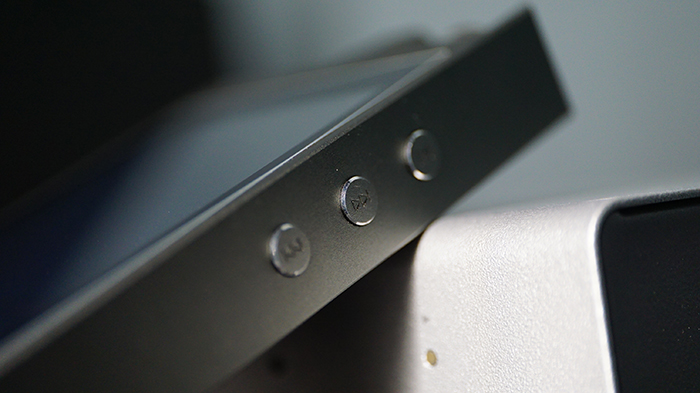 The screen is also subpar for the price and Calyx really knocked it out of the park and became untouchable with their OLED screen.  By comparison, the L5Pro looks dull and lifeless, low res and severely lacking compared to the Calyx M.  It really isn’t important, but I would rather see OLED’s take over from here on…if you have seen the Calyx M’s insanely beautiful screen, you’ll understand what I mean.  If they produce any future models, I don’t ever want to see a low res screen like this.  But then again, that applies to every DAP company out there.  No more low res screens please, OLED is the future. 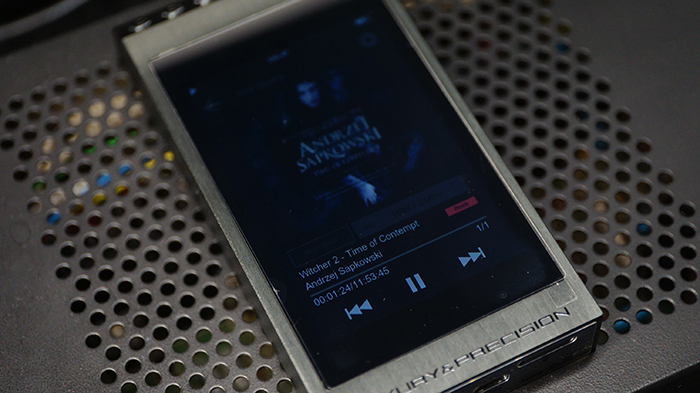 The UI – My gripes

Oh boy.  Well, the L5Pro is missing some functionality right now but I’ve been assured that new firmware updates are coming.  Currently, the USB DAC function is locked and I’ve a list of gripes that need to be addressed.  But, before I do that, I want to make it clear that the L5Pro still sounds bloody fantastic.  It simply needs some tweaks here and there and the developer-coder is working to fix these gripes sometime in the near future and with an update.