Status and peak level audio quality rolled into one just isn’t enough for these guys.  They had to go ahead and craft some of the most beautiful designs along with it.  My K10 is one of those very few pieces of gear that I would take with me if the world ended and I’d somehow survived.  Zombies, Vampires, giant rodents or perhaps even genetically modified ex-girlfriends of mine wouldn’t stop me from trying to scour the land for a solar powered USB charger…if only to power my portable players to pair with my K10.  Yep, I’d totally bring the K10 with me as the nukes drop.  I would pick a nice spot at a park bench overlooking my city and get vaporized with a smile on my face as my lips ignite.  With my body aflame, I’d shout “But, dat’ Bass though.”

For $1600, I expected better accessories and maybe even a spare cable.  I wasn’t given anything else useful with my purchase outside of a nice, hard case box and the stock cable, a nice Noble K10 owner’s card and the honor of knowing what will be inside my body very soon.  True, I am not an avid defender of cable quality, but I would have preferred a nicer, custom styled and fabric braided cable for something that costs more than my 99’ Corolla.  Not a big deal, but it does bother me that such a basic cable is paired with something like this.  Thankfully, the Noble ciems utilize the Westone/JH connectors and I’ve a spare braided and RSA Balanced cable I can use as I shelf my JH16 for the time being.

Noble should absolutely offer some other adapter options for the cable that is included.  Let’s be honest here, these ciems should be balanced at all times if you have the ability to use it that way.  I think at this price, it is more than fair to consider the fact that most owners already own higher end gear and plan to use the K10’s with said “really nice gear”.  I want at least some options in the future.  The stock cable is too thin and low quality for something if this type of a price.  If you are a K10 owner, odds are great you are going to try to invest yet more cash into a custom cable, so be prepared to cable hunt if your rig is balanced.  You know what else would be cool?  A cap for the tips of each mold, some type of little dust cover slip to go over each side would be super awesome, dust protection and such.  Meh.  Maybe I am asking too much. 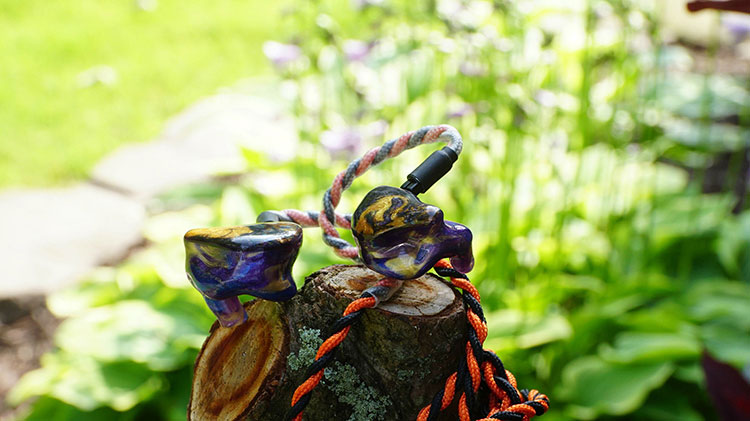 The following gripes are just that: gripes.  Nothing more than subjective and personal preferences, as well as annoyances regarding the build quality.

When I handle my JH16’s, they feel a little heftier and more solid in my ear than my K10.  I feel like the clear shell of my JH16 weighs more than the entire K10, despite the K10 being so much larger.  This is a good thing if you want a light weight ciem in your ear.  However, I would prefer more heft.   Yes, I actually want metal shells, or at least something that feels like it is of a more solid quality.  There is nothing wrong with the K10 build, it is just that when I hold them and fondle them, I get a sense of thinness in the shell and it bugs me.   A bit extra weight won’t matter to me on a personal level, but I can see why it would bother others I suppose.  I mention this to you all because I’ve a $300 ClearTunes CT200 that feels the same as this K10, yet my JH16’s feel noticeably more dense.  For $1600, I would want more heft and that is really the point I am trying to get across.  I know that sounds stupid, but I equate heft to quality sometimes and in this case I want something that feels more weighted.

Important Ear Molding advice:  If you DIY or use a Radians kit for your molds, do not push the molding material flat and flush with the rest of your ear.  Let it naturally bulge.  The bigger the rear plate area is, the better, as I was told.  In the past, I’ve always gently pushed the mold material and flattened it a bit and the K10 is the first time I’ve ever had to perform remolds because I wasn’t supposed to do that.  If you see an Audiologist for your molds, prepare to pay $100-300 extra just for these molds if you live in the USA.  Or, you can buy the $20-30 custom mold kits online.

I suggest you avoid buying from Earplugstore, as they’ve switched the nozzle injector to one that is very narrow in the tube.  You’ll end up injecting the material too far into your canal due to the nozzle being very thin now and half the circumference of the previous tube they offered in their kit.  Normally, the material injected comes out quite fat and bulbous with the older tube.  The new tube provided with the Radians Kit from this store come out narrow and steam out too quickly even with gentle pushing of the injector tab.   I hadn’t noticed they changed their tube until after I tried to mold one ear and thankfully I still had my old Radians tube from a while back when I made my JH16 molds with the very same kit.  The Radians Kit on Amazon now no longer includes any tube injector at all.

Of course, it is nothing short of spectacular.  The Wizard option is an expensive add-on of $400 if you want a unique design, $200 if you want a rehash of someone else’s Wizard design.  If you take a gander at Noble’s Facebook page, you’ll likely sift through a few dozen photos of previous owner designs, gawk for hours and drool heavily at some of the stunning artwork and craftsmanship that went into so many of them.   They also offer a user customizable option as well that can easily jack your final tally price tag above $2000usd.  24k Gold, wooden faceplates, rush order, glow in the dark, ect ect.   I asked Brannan at Noble during the design phase options of my K10…”why can’t you just give me a few different models of the K10, each with a different design, so that I can use a different one for every day of the week?” I was joking, of course.  However, after receiving them and seeing them live and in person, I’d started to think the impossible should be a reality.  Yes, I want 6 more, each unique in design, for every day of the week.   God dammit, Noble.  Just…god dammit. 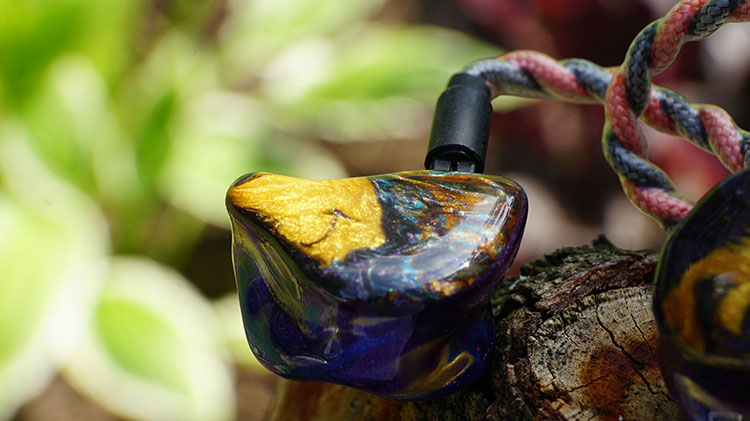 I’ve opted for a Wizard reprint that was owned by someone else who purchased a Savant.  I was told that his design materials cannot be used in the K10, but that it was possible to get a similar design in appearance.  The end result was a fusion of what looks like blond wood and blue-ish burl.  I posted a few snaps on the Reddit headphone page and was met with (in a good way) violent reactions and joking threats from others to come steal my K10.  Truly, it is beautiful and photos don’t really do it justice when you see them up close with the naked eye.  There are subtle patterns from the mixing process that kind of flutter in the sunlight at times, mimicking natural wood grain: That, combined with the more blue tinged areas with their gentle sparkle and reflecting of direct light makes for a hell of a visual appeal. 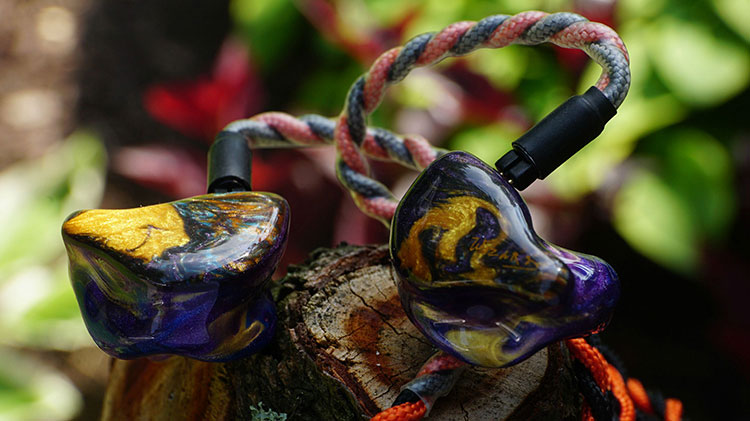 I’m impressed, but I’ve a gripe that pains me.  I wanted the entire ciem to appear like the faceplate is set up, but it appears the tips and central body area are lacking that woody appeal that I wanted.  There isn’t much of it there and the fusion of colors on the faceplate is what I was after.  It might be my fault for not specifying, so dialogue with Noble might be a wise option if you purchase one that you want to achieve a specific look.  Totally my fault for not telling them I wanted more of the blonde wooden look (it’s not wood) on the rest of the ciem.  For me, there is too much blue swirl on the body and it does bother me.

But, this is Art.  Who the hell am I to question it?  It is still beautiful, but it isn’t quite what I wanted.  Again, the faceplates are spot on for what I asked for and I think that is really the only important part.  Everyone can only see that area when I wear them anyway, so it really isn’t a big deal.  If you noticed on the left ciem, there is a long, curved line on the blonde shade blotch area that looks like a butt crack.  Great, I’ve the Butt Crack K10 and it will forever be known as 24bit’s K10 Butt Crack design…some said it looked like a smile.  But, let’s be honest here…that is an accidental butt design…sigh.