By pure luck the local demo tour of the new FiiO X3 2nd Gen was happening when I started this review so I was able to bring in Bryan Co from our local chapter to throw in his thoughts also so in effect we have a dual review. You will find Bryan’s comments either in italics or with a heading in italics.

So Apple closed out the Classic line late last year and everyone mourned, not least the ones who strenuously denied it was anything other than a glorified transport with a HDD and a superlative OS. 7th Gen was truly the end game as far as that iconic player went and lots grabbed one just to say they had it and of course in case it gains about $300 in value over the next decade. I doubt it but I have mine and we count the months. The death of a legend has opened a gap, one hell of a gap in a price point that is anyone’s game and FiiO are no schumcks when it comes to spotting a gap in the audiophiles arsenal and the new X3 2nd Gen (yup they are using gens Apple lovers) brings just about everything to the table that is good about FiiO such as price, functionality and form factor and mixes in with a touch of what the big spenders deeply desire with modern hi res codecs galore. It also brings together the entire DAP range from FiiO into one very recognisable product line that for me is perhaps the closest looking device in terms of form factor to the old Apple IPod Classic.

It also signifies the end of the promising but ungainly looking old X3 candy bar version they had out for the last few years. Importantly the new 2nd Gen X3 is going to cost you just $199 which is a consumer sweet spot, a low risk purchase relatively speaking and right in the middle of the X1 and the X5 line as it should be. It is still cheaper than the excellent DX50 from Ibasso and the Oppo HA-2 which might tempt some mobile phone users rather than buy a DAP. I wasn’t 100% sold on the X1, but I might just be on the X3 Second Gen if it can do what it says it can do and do it well.

Despite the pre-production packaging it is not the X3k but in fact the 2nd Gen. Previously, FiiO slapped on a ‘K’ for all product revisions but this time they decided to adopt the Apple generation game so what you see here is not what you will get in the market, you will not see a K version out and about unless it is an early demo sample. Packaging follows the previous lines of the X1 and X5 with a small red and black decal retail package which opens up to the X3 2nd gen already in its accessorised silicone case and a ready to peel screen protector slapped on the LCD screen.

Underneath you get the usual manuals, quick user guides as well as a coaxial short cable similar to what you got in the old X3 and X5 and a standard 0.3m USB cable for hooking up to your MAC or PC. Added accessories now also include decals to jazz up your X3 look if you so wish and some spare screen protectors. The decals are the Stars and Stripes and a ‘wood’ version. I didn’t try either but if they can do one flag relevant to the country of sale I would tip my hat off. Nothing sells quite like naked raw nationalism on a product. 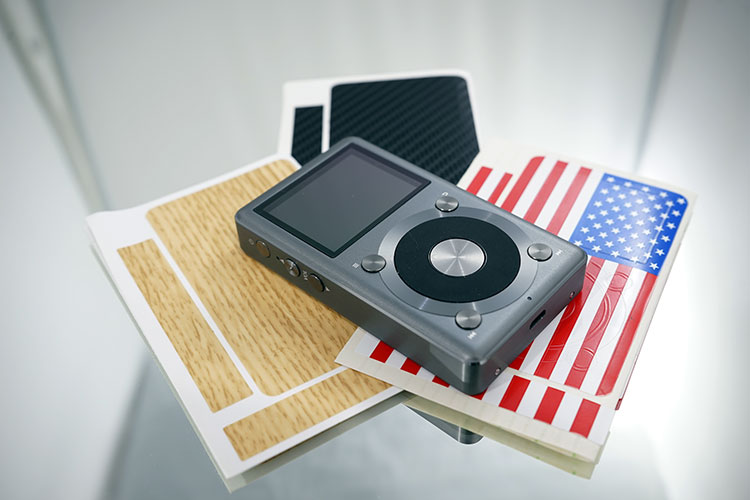 This is the most immediate difference between the old X3 and the new X3 and is more in keeping with the new form factor of the X5 and the X1. In fact from a distance you could mistake one for the other but for a few key differences. The first is of course the color itself. The X3 2nd Gen currently is being offered in a very nice Titanium finish whereas the X1 is sold in a brighter silver or gold finish. Personally, I found the Titanium more to my conservative tastes than the brighter X1 but each to their own. It is not as dark as the X5’s hulking black exterior, kind of got that gun metal vibe going.

Bryan: I was told by Joseph (popularly known as Joe Bloggs at headfi.org) of FiiO that the company has opted to go with the popular X1 physical architecture and retune the popular X3 while keeping its original output impedance at approximately 0.2 Ohms. The X1 and the X3K share the same physical dimensions save for the coat of paint adorning both. X1 comes in silver and black while the X3K comes only in titanium gray. Out of the box, the gun metal / titanium glossy finish of the aluminum body shimmers and begs to be appreciated. Shiny, solid and it appears that the jog wheel is now less wobbly than the one on its older sibling, the X5.

The final key external difference between the X1 and X3 2G is the added lineout/coaxial out from the top plate of the X2 2G which is not a feature of the X1 but was a feature of the original X3. Unlike the X1, you can use the X3 2G as a DAC in much the same way as you could use the original X3 as a DAC via the USB and either a line signal out or a Coaxial line out depending on your setup or simply direct to the headphone out.

In all else the build of the X3 2G matches the form factor of the X1 with the 4 button and jog wheel front plate configuration just below the 2 inch 320×240 LCD screen, a micro SD slot to the right side, the USB port to the bottom and the volume and power controls to the left side. Of course it is a complete redesign compared to the original X3 but not so much of an evolution when compared to the X1 and X5 which now pretty much sets the bar or road map for the type of design FiiO is after.

The jog wheel on the X3 2nd gen though does feel like a 2nd generation also in terms of control and click. It feels tighter, more accurate and less play in the movement and the click feels a bit more accurate than my older X5 and a tiny bit quicker to the punch than the X1 and with better grip for nudging. It is not however a volume control dial like the iPod and those used to the iPod may make that mistake. It is easy to see why and very natural to try coming from iPod but the wheel is strictly for navigation and selection and the volume buttons are to the side. 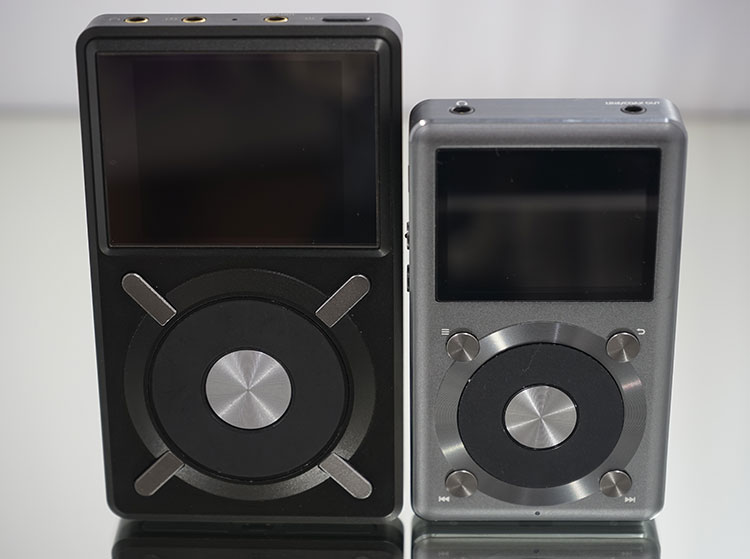 The X3 2G has had the internals completely reworked from the X3 first generation also. It is this reworking that gives it that added codec firepower that the previous X3 did not possess as well as a step up from the X1. The X3 2G now uses a Cirrus Logic CS4398 DAC chip over the older WM8740 of the X3 and the TI PCM5142 on the X1.

The advantage of the Cirrus chip is in its decoding potential over the much older WM8740. The multibit Delta-Sigma architecture of the CS4398 not only allows 24BIT delivery but also enables the X3 Gen 2 to support native DSD decoding which is fast becoming a default feature in the mid-tier $200 upwards chipsets such as the Oppo HA-2.Whilst I am not suggesting it is a ‘must have’ functionality but it does seem to be a ‘must not omit’ feature right now in hi-res capable devices and FiiO is no exception. Native DSD at $199 right now is as good as it gets.

FiiO have also taken a serious approach to increasing the pure DAC potential of the X3 2G with the CS4398 chip which has superior low pass filtering and jitter control than the X3’s older WM8740DAC chip. It also helps that the CS4398 is a bit more power savvy than other DAC chips in the market with regards to keeping your battery life reasonably long despite the higher processing capability than the older Wolfson.

Battery life as a result is a respectable 11-12 hours playback time. This is not bad given FiiO actually opted to place a slightly smaller 2600 mAh lithium battery inside the new gen X3. The previous X3 has a larger 3000mAh battery which ran out originally within 10 hours though subsequent firmware upgrades pushed it slightly higher.

The amping on the X3 2G has also had a change from the original X1. Specs wise, the X3 2G is now positioned more for higher sensitivity headsets and earphones than the older X1 with a slight decrease in proportional gain for specific loads. Gone now is the 16-300ohm rating and in comes now 16-150 ohm rating with an increased SNR to 114db from the older 104db. FiiO seem to be aiming for a better performance than before with demanding or sensitive earphones. It might mean a slightly decreased output gain for more demanding headphones but I personally think the net benefit of a more controlled and better IEM performance is where FiiO should be heading with this DAP.

The X3 2G much like the older first gen X3 can double up as a portable DAC and a DAC component for systems with an analog signal line out and coaxial output for digital signal. It is plug and play for MAC’s but does require software and ASIO drivers to operate on Windows software as a DAC. FiiO have also upgraded a lot of aspects on the new X3 2nd Gen functionality. With the new chipset implementation the X3 2nd Gen can now decode DSD natively unlike the older X5 which converted DSD to PCM output and the X1 which does not do it at all. This also includes by default SACD (got a ton of those) right down to lossy regular formats such as MP3 and not just as a standalone DAP but also as a DAC out from your PC and MAC. It is a thoroughly modern DAP in all respects for hi res playback.

Sadly, like the X1, the new X3 does not have any inboard memory which old X3 users might feel is a draw back as it uses the same single slot micro SD card format as the X1. This means storage will top out at 128GB for micro SD support unlike the X5 which could hold dual micro SD cards at 256MB. However, FiiO have been a bit clever and added USB OTG support via firmware to the new X3 Gen 2, meaning you can add extra memory via flash drives much like Ibasso and the DX series. Given the ever falling price of memory cards once you hit your micro SD card size limit with the X3 2G an extra OTG small flash drive might just be a very useful alternative.