There is nothing worse than getting a dose of the “man flu” when you are in mid testing, especially when the unit for review is the all-new portable HPA-01M current drive amp from Bakoon. You really just have to sit there and wait it out while staring at a $1295 portable behemoth that could very well be my portable amplifier of the year.

Unfair I cried and spent 3 days poking Candy Crush on my iPad (still stuck on level 168 I might add) as my nose, then my ears all got congested. I spoke to Sonny Trigg of Inearspace a few days ago and I mentioned to him that ‘man flu” is the mortal enemy (tinnitus excepted) of headphone review people or just headphone lovers in general. We both agreed. Our ears are our tools and without them, the Bakoon seemed more like a beautiful paperweight than the revelation that might just bring back the pomp and splendor of the portable analog stacking days.

For those who have no clue who Bakoon is, they hail from South Korea and have developed a fine reputation for current drive amplification since the mid-1990’s in SE Asian before broadening out to global via their offshoot, Bakoon Products International in 2009. They are highly respected both for their engineering know-how and their panache for putting out some great audiophile desk top amplifiers and DAC’s such as the HPA-01, HPA-21, and the AMP-11R.

But one thing was missing from their lineup and that is something dear to our own hearts – a portable amplifier. True enough in late 2014, Bakoon reach out to us to let us know that indeed they are creating such an amp and named it the HPA-01M. That same current drive amplification which Bakoon term as the SATRI circuit is now slimmed down reorganized and squeezed into a much smaller portable package along with a dual 8.4V Li-Ion battery setup rated up to 8 hours on the go. It is not the smallest, certainly not the lightest but it is one heck of a classy looking solid metal amplifier and those who loved mid-90’s Meridian CDP designs will certainly appreciate the lines and form factor of the HPA-01M.

SATRI Circuit design works quite differently to typical technology you find in 99.9% of your desktop and portable amplifiers. It is one of the key reasons that make Bakoon products unique. We had reviewed Questyle’s CMA800 and their current drive setup last year but the Bakoon guys do it a bit differently. The key characteristics of the SATRI circuit design should be a simpler circuit design around their resistor technology. Through two resistors (input/output) and their SATRIC-IC this setup eliminates the need for traditional voltage based added circuit designs to filter the signal and in doing so it reduces common noise problems you would find in the traditional voltage based circuit designs. The benefits of such a design, quite apart from lower noise, should also mean a better signal to noise ratio and a fairly robust response to almost any source input and an excellent and powerful but very well balanced output response particularly for headphones.

I should point out though that for IEM’s though the effect of using current drive technology such as the simplified SATRI circuit in the HPA-01M may not be to your liking if you listen at very low volume as the L/R balance is uneven until you get to low/mid levels. Beyond those low levels though there are zero issues. I spoke to GM of Bakoon Soo In Chae on why the choppy waters for IEM users at low volume and he gave his explanation thus:

Regarding your question on the channel imbalance, we’re fully aware of this and this is due to our circuit characteristics. The SATRI Circuit controls overall gain at the very end of input stage, unlike conventional circuits which control gain at the beginning of input stage, which has its biggest disadvantage that it also affects/reduces S/N ratio (or signal “purity”) from the beginning. Our circuit reserves S/N ratio all the way and since the input signal is at full from the beginning to the end, yet only controlled by the potentiometer’s resistance at the end, it directly follows the potentiometer’s resistance characteristics, which always has greater resistance imbalance at the beginning (or at low resistance). Therefore, for high sensitive IEMs, it is the best to use low gain on current output, at which users can control the gain at “safer” region. In order to drive wide variety of earphones and headphones, the current gain setting was our choice for the HPA-01M, which will also meet very demanding headphones available today.

So there are plus and negative points depending on your desired usage with the HPA-01M but I would not give overdue importance to the low volume channel imbalance as I found out during testing nearly all cases where high sensitivity is a factor (customs, IEM’s) that imbalance faded away rather quickly on low gain and the results beyond a few turns on the pot where very satisfying.

For those who have seen their previous amplifiers or tinkered with them will know there is a heck of a lot of transistors packed into each amp, particularly on the latest board design, the SATRI-IC-EX. That entire design for the HPA-01M was miniaturized and re-thought to fit into a shell designed out of a single aluminum block and roughly half the volumetric size of the original HPA-01M. So it is neither the most pocketable, nor the lightest weighing in at around 1kg but I personally find the form factor and build quality to be really tight, solid and assuring. It kind of reminds me of high-end electronics in the 90’s from the outside. The added weight feels assuring. A rather illogical assumption that if it is heavy it must be good.

Compared to the HPA-01M, the Theorem 720 and Duet from Cypher Labs feel like featherweights with only the similar priced Aurender Flow looking bigger and weighing the same or a bit more. I understand when the concept art first came out a lot of people thought the front panel to be modular in design, a sort of Phone Bloks for the audiophile. Those grooved lines certainly look detachable on 2D. Sadly, or wisely, depending on your view, that is not the case but rather it is more of design flair in an otherwise homogeneous block of solid metal. This particular metal came in a gunmetal flavor also. There are three colors for you to pick from at the time of writing – black, silver and gunmetal. Having seen all three pre-production units that gunmetal really stood out from the crowd. It is a personal choice, some will opt for black and others silver but this one matched well with a lot of DAP’s I am using as well as my desktop. 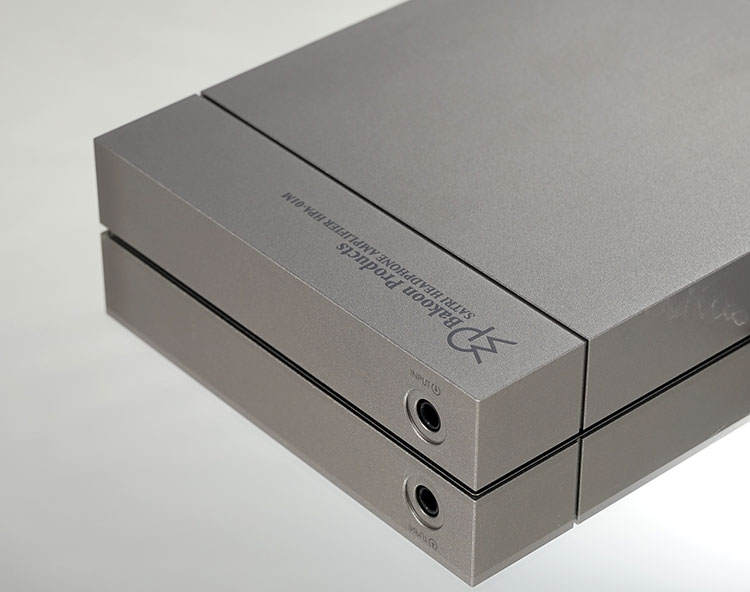 Given it is an analog headphone amp you will not find a plethora of buttons and digital effects and thankfully so. However, the HPA-01M does come armed with a power on/off switch, a low/high gain switch and two 3.5mm outputs; one of which is the current drive output and the second is a voltage drive output. Now having recanted the benefits of current amping you might be surprised to see a voltage output on the amp but after ample testing both outputs are welcome given both outputs give quite a different response and sound signature.

To the left side, you have also your AC input for charging and at the back is the analog 3.5mm input for your source signal. It was initially at the side where the AC input is but after much discussion and a many a head-fier and other bloggers Bakoon decided that it should be at the back. A wise decision as the front and side of the amp is blissfully clutter-free when wired up as well as DAP positioning (up or down) being largely irrelevant in the long run. The consequences of a side analog input for portable purposes would have been awkward to say the least.

The charging cycle of the HPA-01M is approximately 2-4 hours depending on your desired capacity. Two hours will get you 80% and 4 will take it all the way up to 100%. Charging is AC only and the charger is not insubstantial. You can listen to the amp during charging but be warned I found during testing that this impaired the charging process significantly to the point where I got around 30 mins or less playback time despite the charger showing a green LED indicating a full charge. Better you switch it off and go sleep in a cave and come back in 4 hours to enjoy that 100% which is, as described, around 7-8 hours.

The volume pot is set in slightly from the front panel and protected by a front guard machined from the same aluminum block as the rest of the unit. The guard, as in the Cayin C5 and the FiiO E18, does a great job of protecting from accidental volume hikes when moving around but it is much sturdier than the two cheaper amps in question and of much higher quality in the finish. Sadly there is no indication on the pot of volume levels (1-10 etc) and the only sign that you are starting at “0” is the small star screw that is visible right at the lowest level. The amp will not magically restart at a desirably safe low level so make sure this little screw can be seen before turning it on. There is nothing flakey about the gain and power switches either. Both are of very high quality aluminum chrome painted finish and not likely to break off under pressure or continued usage.

Apart from that you get two rather standout white rubber bands with the Bakoon motto “Ears and Years” for stacking stability which doubled nicely as cushioned rubber feet when on a desktop and a 3.5mm right angled Cardas HPI 6cm IC in black. The box itself is nothing remarkable, more of a brown box with a few stickers on it but it does the job safely and securely and Bakoon does ask you keep it in case of possible returns or warranty repairs. On the side of the box you do get your units serial number sticker which should match the one on the underside of the amp itself.