Tonally the M3 DAP has a musical and engaging response that I find to be largely neutral in character. It does manage to stay on the right side of full sounding without coming off as too thick or ponderous or annoyingly bright and tizzy.

The bass extends pretty well actually with decent definition, a relatively dynamic response with good extension but is it more neutral in character without any pronounced mid-bass hump or emphasis over and above the rest of the presentation. I wouldn’t describe it as lean either, it can hit pretty hard actually with good PraT just lacking less coloration. Some bass heads might find the bass perhaps a bit lacking in body compared to say the X5 with their favorite EDM but those after a splash of detail and a complimentary, fast and relatively accurate bass reproduction will appreciate the M3 a lot more.

The M3’s mids have a slightly more forward presentation and vocal presence making them more intimate and engaging than grand or analytical. Vocal performance never feels lost or recessed. Some vocals though do feel a little grainy or coarse with the odd dangerous flirt with sibilance. Sophie Elis Bextor’s poppy EDM track “Not giving up on love” didn’t quite have the same level of smooth vocal performance and control on the lower treble peak that I found say with the DX90. Dash Berlin “Better Half Of me” male vocal performance often slipped into a bit of sibilant sin also.

I was not entirely convinced that the M3’s upper midrange/lower treble was voiced in such a way to suit a high pitched synth and pop vocal barrage. Certainly not in the same way it dealt easily with huskier deeper female jazz vocals and smoother percussion heavy sequences from the likes of Buika and Seamus Blake that yielded far less sibilant results.

The treble performance on the M3 is more engaging and forward than the X5. Though not the airiest or detailed I found it to be engaging and articulate. On more serene tracks with delicate percussion, the M3 did an admirable job with the likes of the IE800 in reproducing that sense of fragility and space. Nothing feels blunted or veiled with the M3 treble performance. At times it can get a little peaky on synths and cymbal work but not consistently tizzy or bright.

Compared with its mid-range piers the FiiO X5 and the DX90 I felt the M3 DAP actually presented a really strong case sound wise as a worthy alternative. If you are considering the matching earphone or headphone my personal preference would be to pick out an earphone with a smooth treble rather than anything bright or thin. I tried working the M3 with the IE800, the Westone W4 and the RHA10i and whilst the IE800’s level of detail and precision was out of this world I didn’t feel it gelled that well with a lot of modern genres in the same way as the W4 and the RHA10i on the M3. The W4 and RHA10i where neck and neck really in terms of how they worked with the midrange but the RHA10i’s greater roll-off on the treble and bass weight on their treble filter setting felt the better match for casual listening on the go and modern EDM, pop, and rock.

What surprised me with the M3 was the power levels for demanding headphones such as the Alpha Prime. Though not quite sounding as full and dynamic as the Primes can be with dedicated desktops and say the HM-901 the M3 could definitely add some juice to the Primes without running out of steam hitting around 36 out of 60 on the volume control. It wasn’t the perfect match tonally for me personally sounding perhaps a bit too bright with a slightly harsh vocal range but it was by no means tinny or shrill.

Switching to lower power hungry cans like the Sony MA900 yielded excellent results with a much more pleasing tonality. The MA900’s forgiving and polite treble and strong midsection never allowed the M3’s tendency to display sibilance on brighter tracks to get out of control as well as adding a nice airy huge soundstage that the M3 never felt lost in.

Sibilance and a hotter treble did reappear with the AKG K550 though it sounded more weighted and detailed than the M900 and the match with the M3 tended to sound a bit brighter or more piercing. I tend to prefer my K550 matched to a bassier and warmer source than what the M3 can offer but that’s not the fault of the M3, the K550 just has that way about it with a peaky treble nature that really needs control to get the best out of it. 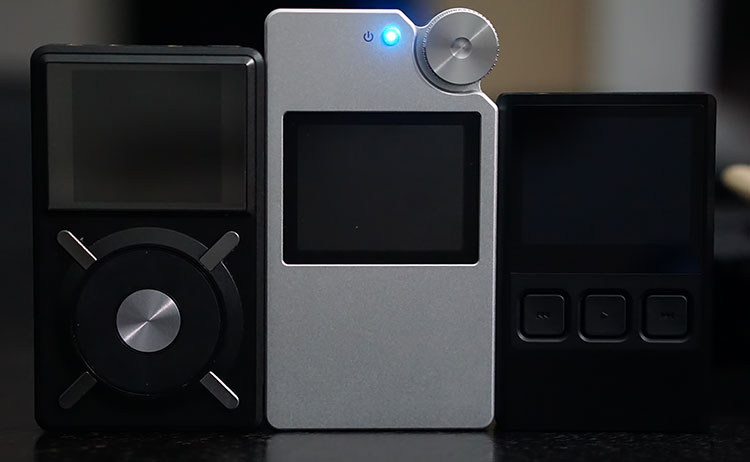 The M3 is tonally is bit brighter than the FiiO X5 with a greater sense of headroom and a more articulate treble reproduction. I also found its presentation to be a bit more forward than the X5 with the bass having a bit more snap to it though slightly less body. The X5 though had a slightly smoother vocal presence though both tended to drop the S now and then compared to say the DX90 which for me is a bit tighter and cleaner especially its attack and decay. Vocal presence on the M3 is more forward sounding than on the X5 which can tend to sound a bit more reserved and recessed but the X5 vocal presence is a bit smoother and with slightly less grain. No question the M3 has a more extended and forward treble presence with a touch more sparkle up top than the X5. I preferred the midrange on the M3 overall than the X5, I found the M3 to be just that bit more engaging and musical than the X5 though the X5 just had a touch more polish and detail.

The M3 tonality sounds more relaxed and flowing than the sometimes strident DX90 but not quite as clean, controlled or as detailed. The DX90 is the unquestioned king of control and detail compared to the X5 and M3. It has the sibilance licked and the treble behaves in a way that belies its mid tier pricing. That might seem unfair to the M3 but the M3 brings a measure of balance and a linear bass response that can sometimes be a tonic to the more strident DX90 dynamic response especially in the bass. Lana’s Summertime Sadness on the M3 had a more coherent feel than the DX90 making it sound somewhat more balanced and flowing even if the top end couldn’t match the DX90 in terms of detail. The DX90’s control was superior on this track on the top end but that low end was a bit more dominant and weighty than the M3 making the whole track feel a bit disjointed and less flowing.

Ultimately I would still pick the DX90 as my go to mid tier DAP simply because of the control and detail but the musically engaging M3 with its more linear lower end and better treble extension edged out the X5 for me. I always get a sense of involvement and fun from the M3 that sometimes the X5, though more polished and possibly better behaved, can forget from time to time.

Test Tracks – James Skelly & The Pretenders “Do It Again”

One of my favorite modern bluesy rock bands, Skelly’s coarse vocals combined with that rhythm and blues bass line on Do It Again is addictive and highly musical. The M3 compared to the iPod really nailed this track with bags more character and detail. This type of music is tailor made for the M3’s general sense of musicality and voicing which does a much better job with baritone male vocals. The iPod did a decent job but just lacked a bit of sparkle and sounded blunted and lacking in extension and detail compared to the M3. I guess the Classic is showing its age a bit and though by no means a slouch it is no match these days for modern portable hi-res players.

I think the M3 deserves to dine at the same table as its higher profile cousins the X5 and DX90 remembering how both started out. All 3 have different qualities and the M3 never comes off as aping either of these 2 portable players. The UI and build quality is rock solid and that command dial of the M3 is a real eye catching feature. Not once did I have any issues with the firmware though i do hope the manual can come out in English soon with more detailed explanations of what you can do with it. It is relatively feature packed with a tonality that makes it relatively versatile over a wide range of genres.

I do think the energetic treble of the M3 will present a slightly more complex challenge in matching to earphones and headphones with warmer and more forgiving head gear tending to sound more satisfying in the long run and cans like the K550 just too hot to handle for any long listening periods. Earphones such as the W4 and the RHA T10i might be cheaper and considered less resolving than the IE800 but the matching just felt more appropriate with the M3’s slight tendency to get a bit peaky and sibilant in the lower treble.

Power wise the M3 has plenty to tap into also so this is not a DAP made purely for IEM’s. Planars like the HE400i will run just fine right out of the jack and even the might Alpha Prime will run at decent volume levels though the HE400i had a much better tonal match overall. Dynamic cans of 16-32ohm impedance with rich warm signatures will be a great match for the M3.