2014 has been a very interesting year for Cypher Labs. It has seen them branch out into pure amping beyond their sophisticated and highly rated SOLO and Theorem 720 product lines. The Duet and Picollo portable amps by all accounts received some excellent reviews and showed that Cypher Labs could be a major player in portable amping arena. The new products lines also demonstrated Cypher Labs was on a majorly fast learning curve, listening to the feedback and more and more coming to a greater understanding of what headphone and IEM users needed in a portable amp. With the 720 we had clarity, dynamics but difficulty in low sensitive headphone/IEM background noise; with the Duet we had a sweet sounding analog amp but with the Picollo we had an amp downsized to a truly portable form factor that was marketed chiefly to IEM users and blissfully noise free.

With the launch of the Picollo DAC things have gone one step further with the integration of the Picollo into a true IEM user lifestyle by launching a portable amp with an integrated DAC that was Android OTG compatible (native or otherwise) as well as PC/MAC plug and play. The merging of phone devices with hi-res audio playback is how Cypher Labs started with the SOLO line a few years back so it has almost come full circle with the Picollo DAC except this time instead of Apple devices the Picollo DAC is aimed squarely at Android users. The original Picollo amp was priced at $399 earlier this year so at $549 the Picollo DAC is quite a jump in price for those thinking the lack of Apple licensing requirements would have saved a pretty penny but of course there is that additional DAC feature that you have to take into account.

Out of the box the Picollo DAC is the exact same size and dimension as the earlier Picollo amp only version despite the fact Cypher Labs have managed to pack a DAC inside the same chassis body. The original Picollo AMP was actually a discrete component analog design using triodes that took up a certain amount of physical space inside the unit. With the Picollo DAC Cypher labs have reverted to opamps instead of the original discrete design negating the need for hand tuning and matching and at the same time increasing the amount of available space inside to allow for the additional DAC component. Using Opamps have their pros and cons being much cheaper than discrete designs and implementations. The can also come with a preset level of tuning, resistance, impedance and in turn elements of pre-determined tonality that can save a lot of time and money for manufactures who in turn can focus on perfecting other components in the system.

Cypher Labs curiously have turned to a Texas Instruments PCM2704 DAC as their decoder of choice inside the Picollo DAC which is not the highest resolving DAC chip on the market, not by a long shot topping out at 16/48 kHz. Of course it can be argued that this is a pragmatic choice given that currently Android outputs at a maximum of 16/44 but lest we not forget, firstly, USB Recorder Pro can output at 24bit and secondly the Picollo is also a PC compatible DAC and amplifier and on that basis it is well short of the defacto expectation even by Cypher Labs own DAC design standards. For now thought the vast majority of Android users will be well catered for in terms of bit rate capability with the Picollo DAC but what if Android in their next revision is able to decode at a higher rate? There stands a question mark on the Picollo’s future proofing value if Android’s capabilities grow and develop as a high end digital transport.

Beyond that Cypher Labs bullion bar type of approach to the design and form of the Picollo DAC is to be commended. The build quality is very solid, more so than a lot of other portable DAC and amps out there on the market right now. The machined aluminum enclosure reminds me of an Apple like unibody type with very few design joints except on the lower casing. Physical measurements wise the Picollo DAC is 20mm x 53mm x 88mm which is almost the same height as the diminutive FiiO E11k and the rather more expensive VorzAmp Duo. It is marginally thicker than the Duo by 2mm which officially measures 83mm x 66mm x 18mm but putting them up side by side they are exactly the same length so not sure where Vorzuge get the 83mm length idea from. The Picollo DAC though is a fair bit narrower than the Duo being more akin to the E18k in length and width. The Picollo DAC comes in silver, grey and a sort of ‘goldmemberish freaky-deaky’ gold. I got the gold one – it’s super shiny and just so well…gold! 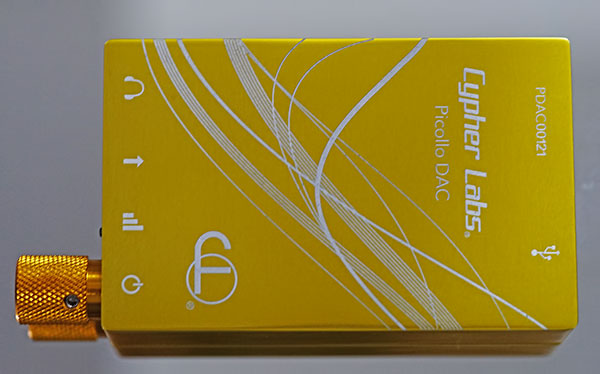 Inputs and outputs for the Picollo DAC are your standard analog line in and headphone jack output on the front panel and a single Micro USB input on the rear panel for both charging and DAC functionality from both OTG and regular USB output from your PC or MAC of choice. There is a tiny gain switch between the volume pot and the line in jack though curiously the labeling doesn’t state which level is which instead using a stepped bar logo indicating the gain function.

The gain switch is incredibly tiny and almost flush with the panel. I get that in terms of moving around you do not want to accidently hit the gain switch and blow your ears off though I would have preferred the labeling to be more intuitive out of the box so I know what gain setting I am starting with. There is a 23.5db gain swing between all three settings, the low gain starting at -12db up to the highest setting +11.5db. That is a significantly larger swing than say the VorzAMP Pure II which is 16db in total though the Pure II has a higher “high gain setting” at 15db than the Picollo DAC. Using a DX90 and a Westone W4 with volume set at 200, high gain comfortable listening was around 8-9am on the volume pot, mid gain was closer to 12 noon on the pot. Low gain required me to pump up the DX90 volume to 225 as the pot maxed out on 200. The most appropriate setting seemed be around 210 on the DX90 for comfortable control on the Picollo DAC low gain setting. Also compared to some forum reports on the previous Picollo amp I didn’t hear any noticeable pot “scratch” on any gain setting nor any channel imbalance on high gain at really low volume with the new DAC version.

The power settings of the Picollo DAC have also been slightly reduced for lower impedance or higher sensitivity headphones and earphones over the regular Picollo discrete amp. The DAC version delivers 40mW less than the amp only version into 32Ohms. Part of the claim of the Picollo DAC is its greater flexibility for IEM users over previous versions and other units in their line up so reducing the power at for a lower ohm load makes sense. 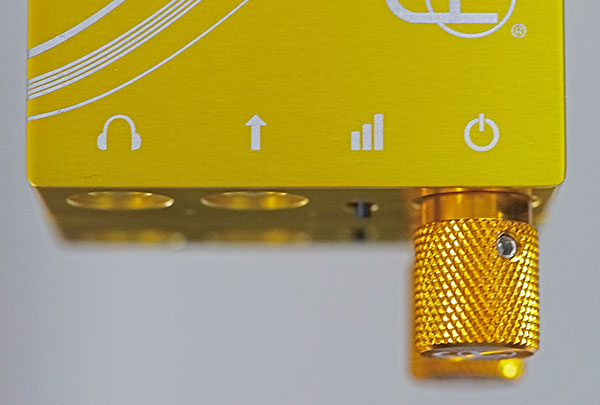 Of course the micro USB doubles up as a charging and OTG connector for your Android phones. Some OTG compatible cell phones will be direct digital Audio OTG like the Samsung S3, 4 and 5 and others will be compatible through USB Audio Recorder Pro. The level and type of connectivity is kind of hard to just outright confirm but as a general rule of thumb I tend to veer to the branded labels for direct audio OTG out rather than use the reliable but user unfriendly USB Audio Recorder pro.

Charging is done via USB and you can use the normal functions of the Picollo DAC whilst charging. Much like Vorzuge’s prized amps Cypher Lab’s Picollo DAC has excellent battery life, ranging from a respectable 12-18 hours when used with the DAC to an almost class leading 24 hours when used purely as an amp. My road testing so far with it has it close enough on the DAC lower end range around 12-14 hours and a little more towards 20 hours on a full charge as an amp. Your mileage may vary but this is a huge step up from even great amps like the Cayin C5 which has only around 50% of that battery life at 12 hours rated and almost equivalent to the Duo which is rated at around 26 hours playback time (my own experience of the Duo has been ever so slightly lower). 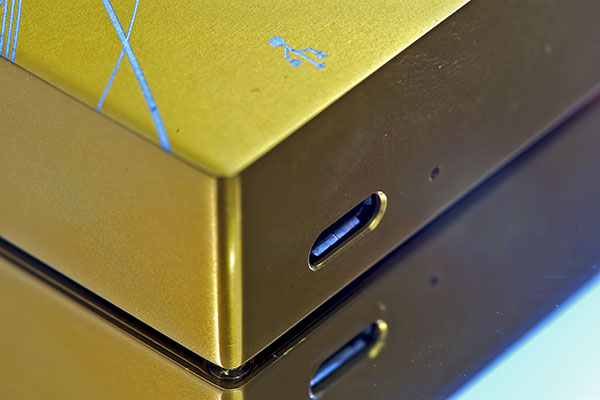 Now technically the Picollo, though Android OTG compatible, does not work as an OTG to Ibasso’s new DAC range or the DX100 sadly after testing. I was kind of hoping I could unearth some secret gold ticket but sadly no. But here is something that threw up an interesting end result with the DX90 and DX50 and that is some sort of passive power bank pseudo function when using the micro USB to micro USB connector supplied with the Picollo DAC. Now I say pseudo because I cannot confirm it is actively charging other than the little charge icon on the battery of the DX90 comes on when plugged into the Picollo DAC via USB. This could be a false signal from the DX90 thinking it is receiving a potential battery charge but in fact it may not be.

In a world of oriental silk and suede cloth pouches and utilitarian plastic sacks Cypher Labs actually nailed the one thing I have been asking amp manufacturers to do for ages and that is actually create a proper case for their portable amp much like IEM’s have their own carry cases. I mean you drop $549 for a solidly crafted amp, a gold one at that too, and then normally hit the local hypermarket looking for anything to put it in to safe keep it. It makes no sense for amps not to have something hard and durable to protect it. Most throw in a cursory soft velvet or leather pouch but Cypher Labs got the whole hog with a very nice zipper hard case with foam cut out for the amp and accessories. That is going the extra mile for me and easily worth $30 – 40 in added value. It’s got pimp value which is very Zen for the headphone local meets. 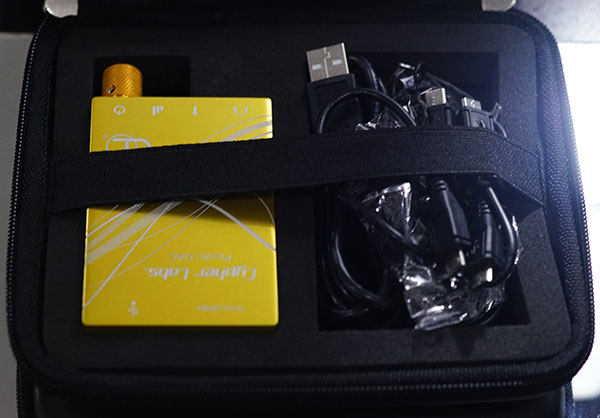 Apart from the case the Picollo DAC comes supplied with 2 short micro USB to micro USB connectors, a short analog 3.5mm IC, a regular length micro USB to regular USB for your PC or Mac, a leather cushion strap and 2 two rubber straps for stacking.