So Jonathan let’s get right to the heart of the matter with the new Grado E Series. What exactly prompted Grado to make a revision of the entire line into the e-series?

We don’t come out with new headphones every 6 months, every year, etc. We don’t have a set revision timeframe. We found a way to make the sound better so we started expanding on that, and a few years later we had The e Series. We’d only come out with something new when we think it’s a worthy improvement and produces a sound we’re proud of.

Do you think Grado achieved the goals then with the new e series?

I think there are two main goals with the entire Third Generation of Grado. On the headphone side, the e Series, we set out to create a more precise, clean, and powerful sound and we’ve accomplished that. They’re just all around the best headphones we’ve ever made. On the company side, we really would like have more people know about the Grado story, the narrative behind the headphones. We have people who have been using Grado since the 70s contact us just finding out that their cartridge is handmade here in Brooklyn. That goal is achieved just yet but we’re on the right track. 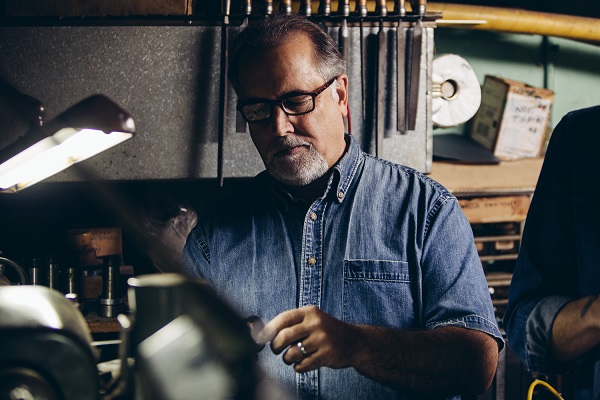 So for those not familiar what is the process Grado goes through in selecting the materials for a Grado headphone – especially the wood?

Everything has a tonal quality, and that’s what we look for. We test different bonding agents, types of polycarbonates, and even the height of the heigh rod can change the sound. The wood is tricky, but a lot fun too. The different types of woods have different tonal qualities, so we demoed all different woods until we were happy with a selection. With The e Series, we cured the wood in a new way and found the sound travelled through the grain differently. This produced a fuller sound using the wood’s natural tonal abilities.

So what exactly did you change in this production process to make sure you got the best set of headphones ever made by Grado to date?

We went over every component and improved it. The wood is cured differently to take advantage of it’s natural tonal properties, the polycarbonate is engineered to absorb excess energy and reduce secondary impulses, for a clearer tone, we gave all the headphones (except the GS/PS1000e) a 3.5mm plug, we applied our most refined geometry to the drivers, and more. (full list: http://gradolabs.com/the-e-series)

I am curious Jonathan, why did you name it the e Series?

With the last series having an i at the end of each headphone, we decided to keep that trend but flesh it out more. Thus the e Series was created. The ‘e’ doesn’t stand for any one word, but so far we’ve had enthralling, engaging, euphoric, energizing, and “everything sounds better”, sent in to us – and they’d all be acceptable definitions for the ‘e’!

In fact this engaging, euphoric and energizing set of headphones maybe already in your hands and you may not even know it. Grado are now stating that the process of producing the new e series actually started at the tail end of the i-series. We know that sometimes when you get something, the next day (sometimes literally) a new version comes out. Well change is scary sometimes and new can make the old seem, well old right?
So to avoid transition woes, Grado slowly shipped the e Series as the ‘i’ for the last 2-3 months. If you recently bought a Grado headphone and you can see a red colored driver then that means you have an e Series headphone already. Reminds me of Charlie and the Chocolate Factory’s Golden Ticket except this time the wait for the gates to open is not so long.