The art of stress reduction

The UI on the HM-901 is a new system called the Taichi UI and has been built from the ground up specifically for the HM-901 (and now for the new slightly cheaper Wolfson-based HM-802). Tai Chi of course is a renowned form of martial arts that is supposed to focus on ways of fighting stress. I appreciate the irony in that statement given my experience of the UI to date. Whilst I would not say I have been overly stressed with it thus far having experienced the birth of the DX50 I could say I am ready for anything but it did have a certain underwhelming experience given how far FiiO have come with their UI on the X5 as well as the snappy touch UI of the AK series. On a positive note it is far superior to the previous UI on the HM601/2/801 series of DAP’s and on a simple level I actually quite like it compared to the DX50 initial UI and the X3 UI but for a flagship I think there is some way to go before the UI is the finished article.

The most critical area for me is the wheel to UI sync, it feel imprecise and laggy at times and has a slightly annoying habit of missing my choice and going to the next one. I can’t say for sure that is a mechanical issue or a response issue of the UI but it should feel tighter than this especially if you are going through a relatively long list of files. That being said I believe only last week Hifiman released a new firmware that states in the change log “Improve the driving program for the wheel, filter most of the wrong signals caused by aging and fix the wheel reversing issue”. Now the wheel reversing issue is where I found the problems to be so I am glad that this new firmware is now out in the wild to address that issue. Most of the review I must point out was done with the previous FW so I might add something later when I get a chance to try out the new firmware.

Boot time for me on a full charge using v1.084 and a loaded 64GB SDCard was approx 18 seconds with the new UI. Comparing that with the X5 though and the X5 has a much faster boot time of 10 seconds and the AK100 with v2.01 has also a speedier boot time of around 12-13 seconds. Given it is not the most elaborate or complex UI and presenting a fairly graphic light interface I think there is room for the boot time to get a bit faster than that over new firmware releases. Thankfully the power down on the HM-901 was about 1-2 seconds which was as quick if not quicker than the other DAP’s in question.

The Home page and menu system

Once booted and into the home page the UI is very clearly linked to the use of the mechanical wheel. The use of an animated graphic wheel as a type of cursor or menu status indicator is actually a neat touch and really helps with reinforcing the fact this is not a borrowed UI from somewhere else. Scrolling the wheel moves the graphic wheel across a range of options including now playing status, a favorites option, the SD Card, a flat metatag library system (album, artist, genre, songs) and a settings option last. 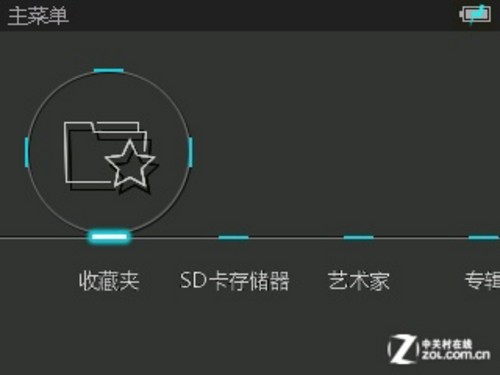 (not the image above is sourced from aliexpress.com and is the Chinese language version of Taichi but you get the drift I hope)

In comparison also with the AK touch UI, the X5 smooth overlapping menu and submenu system and of course the ever impressive ipod UI, the Taichi UI might just seem a little bit low impact or underwhelming to the eye. However what I did find appealing with Taichi UI was that it was easier to pick up and run with than some of the higher impact UI currently it is competing against. As a UI developer nothing more than 3 clicks away and back again was the mantra for us guys in web design years ago and the Taichi UI in many ways follows that mantra quite well.

I do however think the Tachi UI has plenty of scope to add more for the user to play with without breaking that mantra. For instance I would prefer to have seen the tag library sub menu with a genre>artist>album>song drill down and more room in the home page for features such as a custom EQ to go along with the hardware Hi/Vintage setting on the external panel. Some themes might be nice also just to liven up the screen a little and I found most of my well tagged FLAC had no cover support on the playback screen which makes it even more Spartan in the eye candy department. It does sound like a wish list at this point but when you think of the fact FiiO has future proofed the X5/X3 for DSD and USB DAC playback and also the DX50 through firmware rollouts you have to believe there is more to come from Fang and his team that we have not seen yet.

Click on next page for amp card module sound impressions…