Outside of the Colorfly D4 and Ibasso’s rather complicated DX100 the HM-901 is one of the biggest DAP’s in the market far outsizing the diminutive AK series and the slimmer X5. It looks really old school also with the analog volume pot to the upper right and a mechanical wheel and physical button’s adorning the central face plate. The casing is mostly hard but high quality plastics with a leathery finish on the upper rounded plate. It is a unique design, more retro than anything else on the market apart from maybe the C4 from Colorfly.

There is no touch screen on the HM-901 and perhaps just as well because the battery, huge as it is, is still one of the weaker aspects of the HM-901 armory of features. It’s not a PMP so I never really pay too much attention to the screens ability in DAP’s so long as they are clean and clear. I couldn’t find any in-depth specifications on the type of LCD screen they used but its seem to be around 3″ and has average reflective qualities and not the brightest of LCD screens in general. It is reasonably clear and easy to follow though if not under direct sunlight and the new Taichi UI seems purpose built for the HM-901 screen presenting no overall usability issues.

The button configuration on the HM-901 thankfully is a lot easier to get to grips with right out of the box than the FiiO X5 button configuration with easily identifiable icons beside each one for forward, back, play/pause and home on a vertical column to the left and a return or go back type button on the top right of the mechanical wheel which is dead center. The HM-901 mechanical wheel is unlike the FiiO X5 mechanical wheel being a bit smaller, click or stepped based and having a series of small ridges on the front to aid the user in being able to control the physical movement. To be honest given my experience in both, and accounting for the small amount of play in the X5 wheel, I do slightly prefer the snappier X5 wheel over the HM-901’s wheel which does not feel quite as in tune with the UI. That is not to say the HM-901 wheel is of lesser quality than the X5 wheel, probably far from it, just the interaction with the UI is not quite as tight as I would like it to be considering the flagship status.

On the left side of the HM-901 is the memory card slot (sdcard) which can accept up to 128GB as well as a small switch for balanced and normal playback. On the right side panel is an array of control features for power, a small hardware EQ switch up (HD/Vintage), a gain control (low and high) and red/green lock switch for the controls. The HD/Vintage button had me intrigued. I have used some hard EQ switches before most notably on the C&C X02 and the Go Vibe Vulcan amps but not on a DAP. The switch technically alters the HM-901’s dual Sabre DAC frequency response so with HD (high definition)turned on there is a greater extension in the upper frequencies as opposed to the vintage option which produces a 3 db roll-off at 20 kHz to mimic a more analog or tube like experience akin to older or retro amps from yesteryear. It’s a nice touch actually and something I will cover again in more detail when discussing sound impressions. 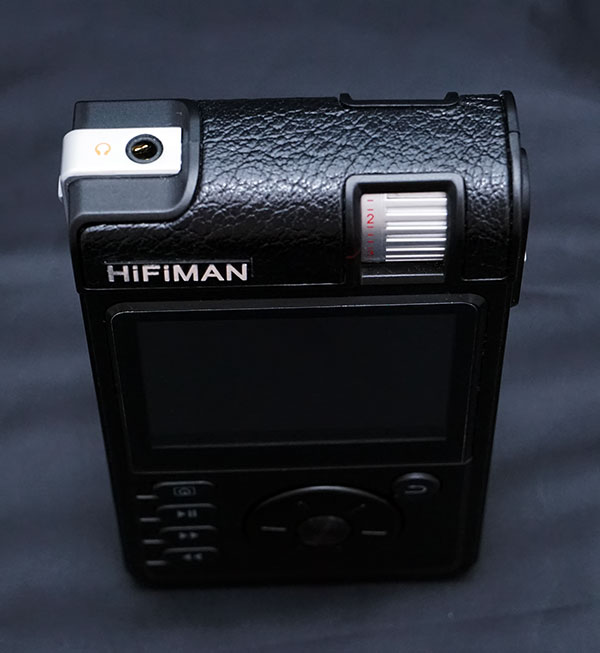 The analog volume pot is a stepped attenuator type and recessed into the top of the HM901 presumably to avoid accidental movement. It is one of the better ones actually with almost no channel imbalance even on demanding or sensitive earphones. The top is finished off with 3.5mm non-recessed jack input which can be adapted with a TRRS jack for balanced output using the balanced/normal switch just to the left of the jack. Sadly I don’t have a TRRS adaptor for this review so we won’t be going too much into the merits of going balanced on the HM-901.

Sadly the HM-901 does not have a universal output socket for data and charging such as what is being used by FiiO and A&K preferring instead to use a proprietary pin socket port and bundling the unit with a data cable for PC/Mac connections and, a spdif/RCA set of cables for line out and a power brick for charging. Note the data cable will not charge the HM-901 for that you have to use the supplied power block which is huge comparatively speaking. I have not seen that kind of charging for a while in modern DAPs and from usage during charging it seems you can only get a full charged HM-901 when turned off. Playback time is somewhere around 8-10 hours max and at times, depending on what amp card you use. It can drop as low as 6-7 hours on the balanced card which is kind of low to be honest for a flagship DAP and recent revisions of the replaceable battery by Hifiman suggest this is a recognized weakness despite its +/- 7.4 volts, 2,000mA rating. During playback and charging also the HM-901 does generate a fair amount of ambient heat from the casing. It is not hot or unbearable but it does get noticeable at times especially with the balanced card. I seem to remember the HM-602 suffer from similar heat issues. It is not something that bothers me but just something to be aware of.