The Kransen at first is pretty much as you expect upon first play with a bass dominant warm and dark sound signature coming from that 10mm dynamic driver and a tapered top end that is a bit restrictive. Boo says I until I listened just a bit more carefully on some good gear and there it was – a pretty forward midrange and vocal stage that actually performed quite well for more laid back genres where vocals need to grab attention. Where a pounding bass line is not required and a fast moving articulate top end the Kransen can actually sound quite acceptable. Lana Del Rey’s “Born To die” vocals was impressively clear and engaging, much more than I expected so kudos to Urbanears for getting that bit ok in my opinion.

I have to note at this stage the Kransen, at 100db sensitivity, is not the most sensitive pair of earphones I have encountered and as such I actually think a DAP with a good amp or a headphone amp might be need to get the best out of these earphones. Big Bad Voodoo Daddies “I wanna just be like you” on my ipod Classic 7th Gen out of the jack with nothing added sounded flat, narrow and totally lacking in dynamics. I have not had a lot of luck lately jacking out of my ipod so I guess I shouldn’t be too surprised but I have a feeling this is the exact audience Urbanears are appealing too. Female vocals tend to be clearer than male vocals on the iPod Classic but the whole presentation seems terrible blunted and bass dominant even with its above average vocal stage. 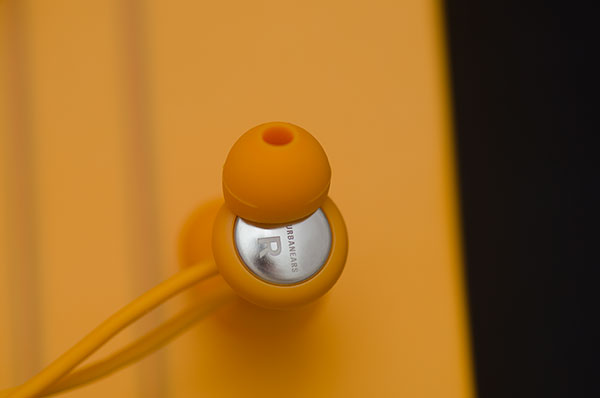 The driver doesn’t really have the sophistication or articulation to handle anything expansive or requiring accurate tonality or imaging. The Kransen is really all about the bass with an added bonus of having a midrange that is thankfully forward rather than recessed. Everything else beyond that is a bit of a blur and lacking in resolution and detail. I could throw an expensive amp and DAP at this such as the AK100 and yes things do pick up with more sparkle and dynamics but I can’t see that match happening in the real world. The price gap is too big and the audience too far apart.

I do not think people will buy a Kransen and pair it with anything other than a mobile phone an iPod or shuffle and tap into a never ending stream of R&B and House whilst commuting or hanging out with buddies. And it is exactly with those genres that you really do understand what the Kransen is all about – huge over powering booming bass. Deadmau5, David Guetta, Benny Benassi, Rhianna – take your pick because this is where the Kransen belongs. But those with a keen sense of memory will remember I said I would pick these over the ADV Alphas and I stand by that. The Kransen might not be the standard at budget level – that is RHA’s territory for me, but the Kransen’s more expressive midrange and slightly brighter sound signature than the Alpha actually made this a much more enjoyable experience for dance and R&B than the frustrating uber dark Alpha. Sorry Westone but ‘them’s the knocks’.