What’s in a single number change? Moving from 5 to 6 should be an evolution of sorts, I mean the EF5 was a pretty powerful little tube amp that packed about 2.5W per channel and took little or no space in 2011. But that was then and this is now and the world of planers has moved onto balanced beasts such as the Mjolnir and even moved the game into portable powerhouses such as the ALO Audio RX MK3 in balanced mode. What was great then is just ok now and we can virtually thank the Hifiman HE6 and the Audeze LCD-2 for driving the whole power amplification market to what it is today.

The EF6 is Hifiman’s big response ironically to it’s own creation the HE6 planer and is designed to match the needs and tonality of the HE6 which, given the right 3rd party amp, can sound wonderfully smooth and possesses huge scaleability potential, frighteningly so actually. Let me tell you in the flesh the EF6 is nothing like the EF5. This is a totally different beast and frankly one of the biggest headphone amps I have ever laid eyes on. I think it is even bigger than my old Denon 3 series integrated amplifier and weighs a ton also. I dunno I feel satisfiingly excited and assured the power might be there seeing something that big on my desktop purely for headphones.

The EF6 is a 10 kilo pure class A transistor circuit headphone amp. No push and pull, no hybrid technology stuck in there coloring and adjusting the flavor. Sporting a ‘hand-made’ 24 step attenuator and that all important 5 watts per channel this is the flagship amp for power, the soul mate for planers and perhaps, just perhaps, a problem solver for any inefficient driver masquerading as a regular headphone (hello AKG).

Perhaps the peculiar aspect of such a behemoth though is the single ended circuity tucked inside the black casing. No balanced mode? Yes that is correct the EF6 is single-ended unbalanced setup even though some might be fooled by the 4 pin XLR output on the front plate the input at the back is RCA only. Yes the EF6 can double up as a pre-amp with the dual RCA input and single RCA output on the back as well as a single line-in on the front plate but balanced mode it does not do sadly. Since it retails for around $1600 I felt it should have had a balanced circuitry option in there somewhere. It certainly is big enough to carry one and quite a lot of planers these days have either been re-cabled in balanced mode or come with a balanced mode option such as the Bryston BHA-1 and the Schiit Mjolnir (considerably cheaper also than the EF6). 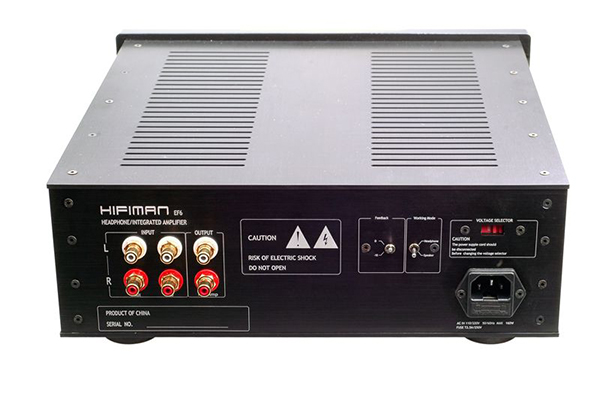 Front and center we have the 24-step custom made attenuator (volume knob in case you pause for thought) which although superior to the Alps pot variant does sometimes lends itself open to concerns from a few that accurate volume setting is not possible. Having used the Burson stepped attenuator on the HA-160 for the best part of 2 years with relative ease I found the EF6 attenuator to be pretty accurate though and a small minor adjustment at the source level was perhaps quicker for varying levels of source volume levels rather than minute fiddling with the amp controls. Added to that stepped attenuators have better left and right balancing than regular volume pots with higher quality resistors being used.

To the left we have the single power on and off button and to the right we have the three source selectors – CD, Aux and line-in and then the single ended clamp jack and XLR can inputs to the far right. Being a solid state class A powering up the amp was effortless, smooth and surprisingly, after extended listing periods, relatively cool to the physical touch unlike some other class A amps or planer orientated amps such as the Lyr which sometimes you could fry an egg on after 30 minutes use. To the rear we have that singled RCA setup I spoke about earlier with dual input RCA’s and then single pre-amp output. Apart from that you have a voltage switch, AC and a simple high/low gain switch which is normally in my testing time used at the low level setting except for the HE6 and LCD-2.