The J88 by JBL, or should I say the JBL J88 by Harman. There is a lot in that sentence if you read carefully. Harman is basically Harman Kardon if you are not already familiar with that and they are also responsible for the AKG in one way or another. Now I love my AKG stuff, mostly, and my K501 and K550 are among my favorite everyday casual listening cans and the Harman Kardon CL we reviewed a few weeks back was a very decent classy looking headphone. JBL on the other hand I tried maybe 4 years ago with their reference 5 series NC cans and to be honest I didn’t like them in either sound or implementation. The NC was an external brick-like minature kidney disalysis machine and the on-ear design was more like an origami expert trying to make an ugly swan out of my ears.

That is the last myself and JBL had any sort of contact really until a few weeks ago when the new “J” line came out and I landed myself the striking white and orange version top of the line J88 edition. Well there is the J88i with the inline mic but honestly I have never used a mic for any of my cans so makes no difference. Show me a headphone with inline Angry Birds and I might relent but until then its straight flat cable all the way.

I did say striking didn’t I? Yup the J88 has a few nice color combinations in silver and black but the white and orange just felt the better photoshoot session. Sure its a touch Beats/pop-culture (insert cultural meme of choice here) but honestly I am in a white mode of late and it looks kind of cool actually. More fun than the black and silver ones for sure and I think generation whatever these days is braver than mine about color choices so if you can’t beat them, join them eh?

It certainly comes packed with a few “fun” extras that I think for the price of $140 or 6.69k make it fairly good value for the budding headphile such as a detachable single 3.5mm terminated flat cable thats has almost no memory retention, a lapel clip for the cable and a nifty padded soft carry pouch in a fairly large box I might add. The large box is pretty much as small as it can get since the cans themselves are in no way small or foldable. These are M50 sized headphones with fairly deep padding and finished in a hard plastic mould with metal finished cup plates. The cup and headband plether is accented in an orange finish with the plastic mostly in white and cup plates in silver or metal finish. Give it a shake and it makes a bit of noise – it’s not the most compact of finishes but there is enough flex to make me think it can take a fairly solid bashing outdoors and still play well. 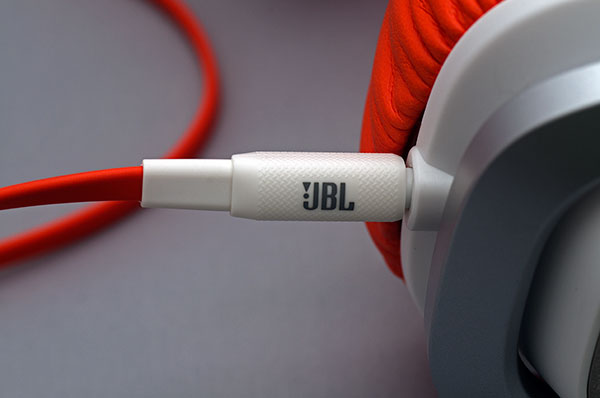 On the head its a fairly comfortable fit, no size or sweet spot issues with those large over the ear pads so headsup old JBL Reference users the origami folder has left the building – this is a much gentler and caring experience thankfully. For a closed headphone its has pretty low isolation levels in terms of leakage and background noise. The pressure is about average though clamping could be tighter. If I could fold it I think it would be a touch more win on the go but as it is I just feel it is a bit on the large side. That being said I felt the fit was above average for portable circumaural cans and the cable has almost zero memory retention making it a nice clean and fast plug and play set of cans compared to most of the fiddly cheesewire cables from pricier competitors.

At 32ohms this means the J88 is a fairly easy headphone to drive also and whether a small tube amp or SS or an ipod unamped I didn’t get an overly worrying impression that the JBL J88 would be too taxing and so it proved the case with plenty of power at roughly 60% of the volume on an ipod 7th Gen Classic and less than 9pm on a Trends PA-10.1D volume pot. For all but the weakest of DAP’s it is really not necessary to amp these cans unless your aiming for some slight change in dynamics or really test the 50mm drivers to the limit.