Rein Audio of Austria is a name that came onto our radar quite recently with the X-Phone desktop amplifier which we felt was a bit of a work in progress but had some good plus points and a nice price tag which I am glad to see is still there at $399. The X3-DAC has been out just a little longer than the X-Phone but is a much weighter effort and as such comes with a much weightier price tag of $1680 (introductory has just passed now at $1280 which is a shame) and some really nice design and build material choices that mark it out a little from the rest of the crowd. It is double the price of the Gungnir and almost treble the price of the tiny powerhouse Just Audio uDAC-2496 and if some of you read my uDAC-2496 review you would be forgiven for thinking I was not recommending the X3-DAC which to be honest would be to miss the point of that review as the uDAC-2496 is all about capability for size and price.

Unboxing the X3 from it’s rather exotic Asian-style box you have to give credit to the team at Rein Audio for putting together a really well constructed physical box. Being more deep than wide and sporting a nice digital UI display and button controlled rather than a more typical switch dial, the X3 has a nice minimalist feel to it’s design. The back is the really cool part sporting some splended Rhodium plated connectors and sporting balanced, single ended, coaxial, optical and USB inputs and ouputs. I love my Schiit Gungnir for having two RCA unbalanced ouputs but the Rhodium finish on the X3 is so darn classy my V100 amp just made the short journey from the left of my rack to the right and piggy-backed the X3 in a heartbeat. Class attracts class I guess.

On the front of the X3 you have the graphical UI to the left and 4 simple buttons to the right with power on and off, source selection, digital filter selection (of which there is 5) and the final one allowing you to choose to upsample most streams to 192k which I tend to enjoy a lot. The drivers for the ditial media connection are C Media 2.0 which luckily is the same drivers for the Gungnir if memory serves me correct as I didnt need the driver CD that comes with the X3 to get PC interface (USB 2.0 High Speed True HD Audio) up and running. 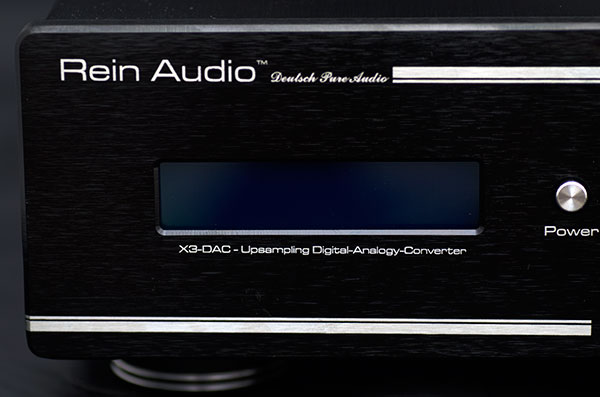 The X3 sports a dual Wolfson WM8741 chip decoding setup which is a more premium grade DAC chip and a step up from the older but very popular WM8740. Streams are decoded up to 24/192 from all input points be it USB, Coaxial or optical and sampling rates are selectable from the front panel switch also from 44 to 192k depending on your preferences. The digtal filtering has 5 different flavors from filter one which is the boldest and more forward presentation to the most restrained filter option no 5. My preference was for filters 1 and 2 given my personal preferences of having slightly forward presentations and big dynamics in most of my music.

Given the range of options available for filtering the sound I got a keen sense Rein really went to town on figuring out what the best implmentation setup could be for the dual WM8741 DAC chip. I have seen plenty of WM8740 with some fantastic implementations such as the Just Audio uDAC-2496 but of coure the onboard I/V of the WM8741 means things get a little bit harder to vary so kudos to Rein for being able to give us some nice variation in the end product that many DAC’s (even expensive ones) rarely do.

How it sounds on the next page….