I remember the 80’s! Though I don’t readily admit to every aspect pleasing me I still do look for my dose of hair metal and Lost Boy soundtracks as my reference material when I need a good pep up. The 80’s will never be as stylishly outlandish as the 70’s but for tech freaks the 80’s was the era of the Casio digital watch, Metal Mickey, Rubik’s cube and of course the humble but game changing cassette tape of which the TDK name was to the fore. TDK made a number of other splashes into the audio market such as some tape decks and until recently some low end earphones and throwaway PC headsets.

But something has changed, TDK have gone kind of cool and done something rather interesting by releasing a line of audio gear that has more than passing nod to the nostalgia of the 80’s with two lines of headphones – the ST800 and the wireless WR700 and the super bling remake of the iconic boombox (you just have to see it to believe it, very big, very boombox and honestly it just commands you to play Mister Mister from the word go!). TDK are taking this audio lark a bit seriously now but does it stack up against what is already a very competitive market?

The ST800 is perhaps the standout headphone over the wireless WR700 for audio quality so lets look at that. The WR700 I have tried and enjoyed but really see that as a great functional headset for moving around rather than an involving musical experience. The ST800 though is pitched in at the $150 – $200 market and as such it is up against the likes of the formidable Sennheiser HD25-1 II, the funky Aiaiai TMA-1, the warm and woody ESW9 and the omnipotent marketing beast that is Monster to name but a few. It’s got it’s work cut out to be a success in such hallowed company.

Now the local price of these are just over 6k php ($150) so I am going to base my opinion on that price entry point and not the US MSRP of $300 because I am going to go right for the jugular and say this is not a $300 headphone – it just doesn’t have the finesse and build for that price. At $150 it is a much more interesting proposition and to be honest in the local market pricing them at 6k with decent packaging should make a few ripples and grab attention.

The one thing to note about the TDK Life on Record ST800 is that the packaging is well thought out for the price. It’s big, square with a nice two third cut away and plenty of sexy pics of the headphones adorned on the outside. It’s eye catching, modern and a cut above some of the more spartan competitor packaging at that price point.

Opening up the package you get a nice little envelope type pocket for the warranty and product sheets at the front which drops down at an angle to reveal the cans. The inside is a mock suede contoured tray holding the headphones. It is none too shabby to be honest and you do feel you are getting your money’s worth with the packing. Some genuine thought has been put into this. Reminds me of the TMA-1 in that respect. I wish some other marquee headphones companies would try this more often at this price range. 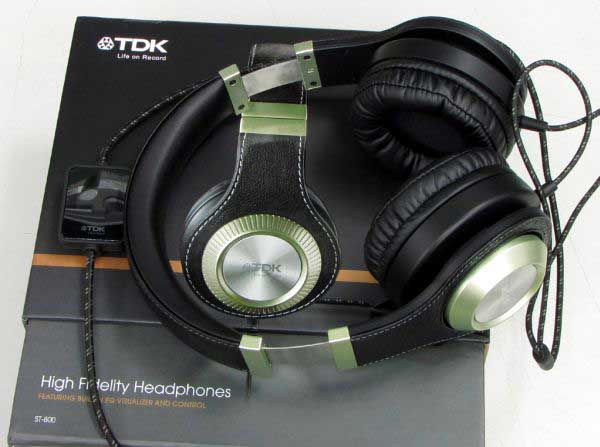 Game of two halves here – the leather type finish of the band stretching down over the cups is fabulous for a headphone at this range and punches way above its competitors who are still messing around with captain plastic. So first half to TDK then but then in comes the plastic bits on the cups and I just found them to be a little out of place and a bit cheap compared to the rest of the unit. It sort of feels like its not quite as integrated as it could be. Looks wise top marks, the touch and feel of the plastic though takes away from a full thumbs up. Overall though this headphone feels pretty durable, well put together and certainly it would be hard to find a headphone as classy looking as this at this price point outside of the ATH-M50 ( a traditional bang for buck super headphone pulled out to just embarrass everyone else trying to make musical magic on a shoestring budget for our new readers and one of our personal house favorites.)

The cable is a cord type clothed covered cable which looks pretty durable and terminated in a 3.5mm silver and gold plug (comes with 1/4 adapter and extension cable also should you need them). Below the y-split its blissfully memory free but sadly the left and right cables from the ‘y’ up the cups on this were a tad more unruly and did on a few occasions it did try to curl up under my chin. The nylon does make it a tad stiffer and heavier and probably would not have minded a light cable for more flexibility.

They are a biggish headphone more in keep with Beats Studio than Beat Solo dimensions but the thick circumaural leather pads are comfy and the whole thing is quite well balanced once on your head. The leather might leave you prone to a bit of sweat with prolonged play but nothing too irritating. Overall these are relatively comfortable to wear with no unwanted pressure points.

TDK Life on record’s drive for a retro rebirth means we have a few unique features on this headphone that for serious headphone enthusiastic might be seen as an unnecessary distraction but for many other listeners they might add a touch of fun and flexibility to their listening pleasure.

The first is the little plastic square box halfway down the cord – the EQ box which gives you about five steps of bass and treble which you can separately tune to get your favored EQ setting. They are a tad simplistic but they do work and they do alter the tone of the sq from the headphone. Its a definite throwback to the 80’s with the simplistic equalizers and tiny LED simplistic displays.

The second one I am not that in favor of and that is the volume control dial in the right cup of the headphone itself. To be fair it is quite low profile and doesn’t protrude but the control is messy and not very precise and can be cumbersome to use. I can understand the inclusion of it as a feature to help those with their main volume control – amp or DAP from having to reach in their bags and pockets but personally I just found the right volume match and let it stay there. It really is just one more barrier to your ears in all honesty.

The EQ activates the volume dial so if you run out of battery juice (note these need 2 AAA in the cup) you can still use them as regular headphones with the eq turned off.

The isolation was excellent for my ears and allowed me to just focus on what was coming out of the cups. They are bit more challenging to drive than say my ESW9 having forced me to go up about 2 notches on my FiiO E9 and the ALO Audio RX2 porta-amp so be prepared to juice it a bit more if your trying it out of a headphone jack of your ipod.

So sporting 50mm drivers in circumaural cups and big pads I was expecting a big sound huge quantities of bass. It is a closed headphone so not expecting massive sound stage but better than average isolation. In actual fact I was not too far off.

Without the eq box switched the bass, though not as impactful as say an ATH-M50 or colored as the ad700 MK2, was quite capable given the 50mm drivers on offer. It did excel on v-curve friendly music such as electronica, R&B but sadly less sparkling on faster detail orientated rock and metal tracks. The top end sounded a bit mute and the smallish sound stage gave a congested feel not allowing the guitar work to soar or flow as I would like. Put it back again into tracks like Daft Punks “The Grid” and that low end bass puts it right at home again. It has a relatively warm signature without the eq which is nice and non fatiguing and I don’t see anyone dropping dead from listener exhaustion from them.

So lets turn on the eq and see what we got then eh? When you turn it on there is a slight pause while it boots up before allowing you to hear your music and it does remember your previous setting which is nice. But be warned the volume dial on the side of your right cup becomes active so best maybe take it off first just in case you have it on high. The default is flat on the bass and treble and you can push either up by 5 clicks. Pushing the bass only up to the 5th click gives me something akin to the ATH PRO700 mk2 coloration with just a wall of bass and not much else to be honest. Cool if your a bass nut but not so great if you want to hear anything else beyond that. Pushing up the treble to 5 though was not as extreme as I though it would be – no piercing or high end sharpness you would expect with overemphasized treble possibly suggesting the treble is a tad muted. Now mixing it them together was actually more fun to me than the default flat eq. If I am paying $150 I want fun and not analytics to be honest. I found the best match of bass and treble to be around 2/3 – switch that combo either way based on your preference but it seemed to give the best balance between block rockin’ beats and clarity.

Overall the headphone is a bit of fun with some sleek retro styling and at 6.5k local and about $150 street price international I would say its worth it. I initially had reservations given that I am not a fan of gimmicks such as eq boxes in the line and a volume dial but the eq box does add a touch of fun to the sq when you need it. As for the volume dial just get the right setting and leave it, it adds little to the setup and not as accurate as it should be for quick adjustments.

Its warm sq will be enjoyable for many and frustrating for the more discerning with its muted highs and small congested sound stage. Its a tad big for portability but robust enough to be take outdoors. Pair this electronica, hip-hop, dance and R&B and you got a good package worthy of the price. Try to take this further and it may struggle. If your matching with amps and a DAP go for neutral and transparent setups to squeeze every last drop out of the top end and try to avoid existing dark sq sources and amps.