Android 3.0 Honeycomb is Google’s first foray into tablet operating systems. Unlike its main competitor which only improved upon its existing platform and upscaling it to a tablet form factor, Google decided to develop its user experience by taking some features of a desktop layout and streamlining it for use in Android-based tablets. The result was a visually new interface that is markedly unique compared to previous Android versions. Dubbed the Holographic, or “Holo” UI, it largely resembles futuristic, TRON-like design elements with its dominating blue color scheme and use of outlines and borders on some UI elements. 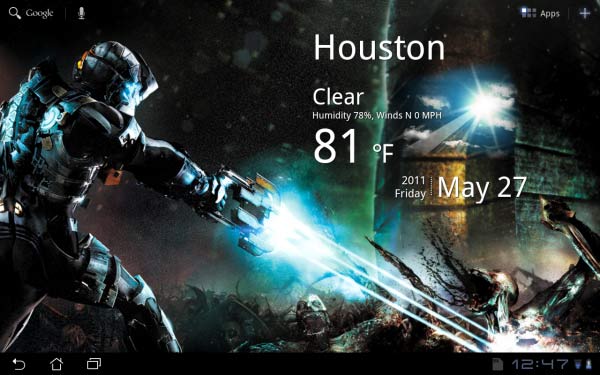 Welcome to my default homescreen.

First, let’s look at the homescreen. In Honeycomb, the user is given a maximum of 5 homescreens to play with; fill it with icons, widgets, anything you like. Homescreens scroll in 3D-like effect as is shown in the picture, complete with a neon outline to show the transition between each screen. This has been an implementation we’ve seen in some 3rd-party home launchers like LauncherPro and ADW, and now is enabled by default on 3.0. With the system able to incorporate full hardware acceleration, scrolling through the OS is buttery smooth even when filled with content. 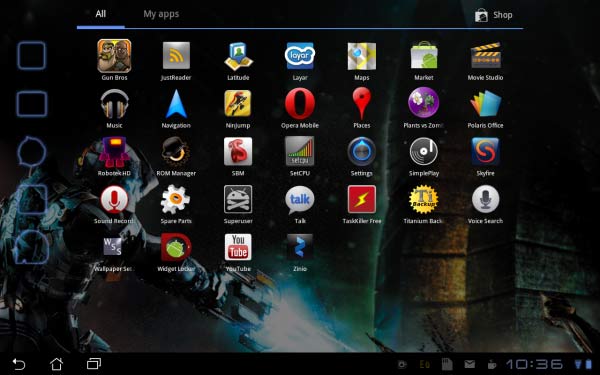 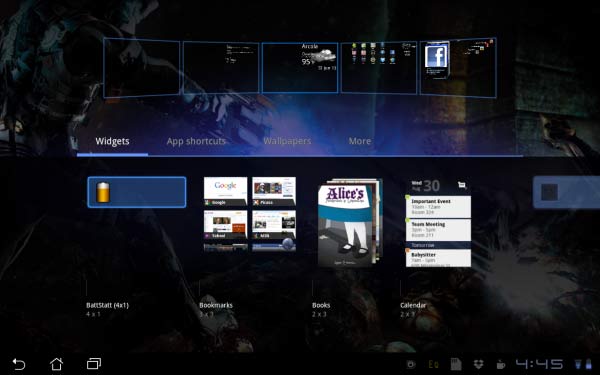 This screen allows the user easy access to different shortcuts, widgets, and more.

Over to the top left there’s a quick-access Google search bar as well as Google Voice Search icon; these are now built-in to the system unlike being as widgets in previous versions of Android. On the top right is the App Drawer to access the entire library of apps present in the device, as well as a + symbol which enables users to quickly add elements to the homescreen. This opens a selection screen that displays a preview of your 5 current homescreens, and down below is a categorized drawer for specific UI elements: widgets, wallpapers, shortcuts, and other functions. You can either tap on a selected item and it goes to the center homescreen panel, or you can drag it into a panel you wish to place it on. Deleting such elements is easy as well; all it takes is a long-press of an icon or widget, and have it dragged to the trash can icon in the same spot as the + symbol.

Widgets have always been a feature that characterizes Android, and Google continues to improve upon it with Honeycomb. New designs of the default Google widgets are available, like the updated interfaces of the GMail, contacts, bookmarks and calendar widget as well as the awesome Analog Clock. ASUS has its own take on widgets, incorporating into the Transformer their own weather, email, clock, gallery (MyZine) and cloud storage (MyCloud) widgets. And aside from the default settings and layouts, Honeycomb (at least 3.1) now officially supports resizeable widgets and introduces an entirely new layout: the stacks widget. Essentially, the Stack aggregates data such as news articles and apps in unique scrollable thumbnails; users would just flick through the thumbnails and they scroll in a 3D-like fade, and a tap on the selected item takes them to the relevant app or content. This is seen in some high-profile widgets such as the Google Market, Youtube, Google Books and more 3rd-party solutions. 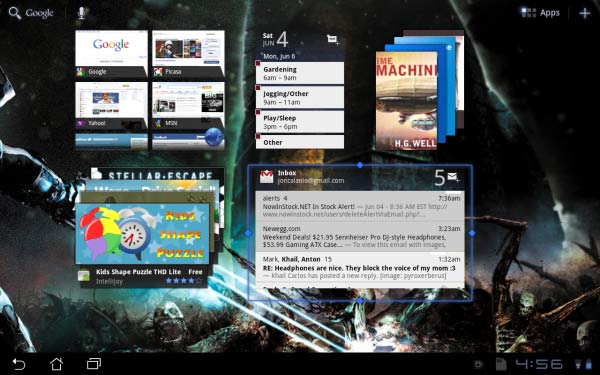 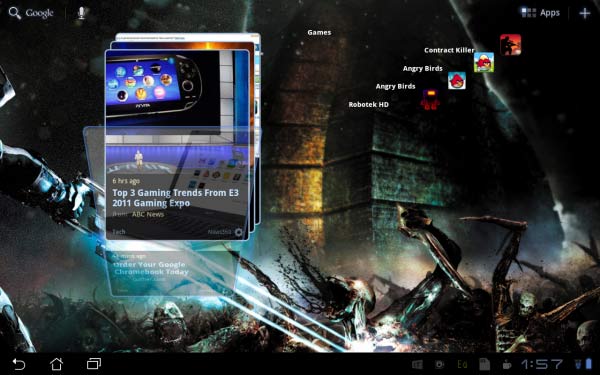 The Stack widget in action, see the transition from one preview to the next.

The lockscreen is another cool thing worthy of notice. Instead of the traditional slide-out to unlock feature found in Android and iOS, Honeycomb has the “Ripple” lockscreen enabled as default. This is basically an icon of a padlock that users have to drag to the edge of a circle, making rippling animations as it goes. This is rather a fun feature, since people can just roll around the lock without having to unlock the screen by just moving it about and not hitting the edge of the holographic circle. Other lock options also exist, like the use of the Android-native pattern lockscreen as well as a numeric PIN or an alphanumeric password.

One unique aspect of Honeycomb is its focus on a button-free experience. There’s no physical Home button for most Android tablets like the Transformer; instead, Google decided to implement a familiar feature we commonly see in desktop platforms – the taskbar. Like in Windows, the taskbar in Honeycomb performs most of the basic functions of the system. It has a Back, Home, and Multitask button for UI navigation, while over to the opposite side of this is the clock and status icons, where things like WiFi status, battery, and notifications are displayed. Tapping the clock reveals Honeycomb’s extended menu, where it displays even more useful information such as a scrollable list of recent notifications and an icon for easy access to the most common Settings toggles: Airplane Mode, Brightness, and Auto-Rotate among others. This implementation is easy, non-obtrusive, and very intuitive compared to others. 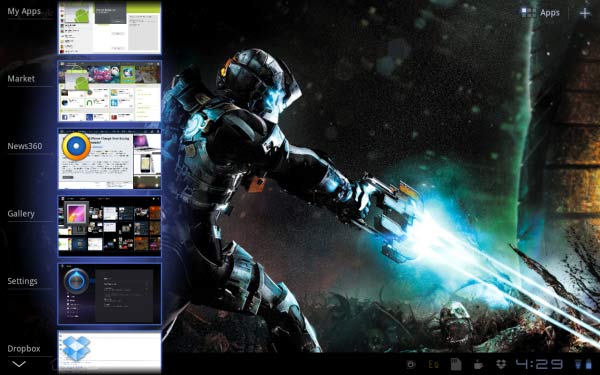 All running applications are displayed in this column of previews.

Building upon this taskbar-oriented interface, Google decided to ditch the traditional Home Button long-press to display all running applications. Instead it implemented the Multitask button, which displays the most recent applications in a vertical scroll complete with a thumbnail snapshot of the apps. In Android 3.0 this feature is limited to only display the 5 latest running processes, but in 3.1 this is increased to all running processes and applications in the tablet. This is a welcome improvement over the multitasking options in the older Android builds, as people now have easy access to their apps through a tap of the shortcut. Most, if not all, running apps will continue to run their operations even when minimized: loading a Youtube video, downloading Market updates, and more.

The full Settings menu of Honeycomb has been revamped as well. All of the core settings found in other Android versions are presented in a more systematic fashion, with the main selections are pinned to the left panel and sub-menus are to the opposite panel. The Storage menu now previews the total space occupied by various content in a multi-colored bar, and on the Screen menu there is a feature only found embedded within the ASUS Transformer: the screenshot capture toggle. This is how I get these screenshots without using 3rd-party software. And last but not the least, there is a nice little effect seen while scrolling through all menus, and not just in the Settings but throughout the entire OS; if a user hits the top or bottom of a scroll selection, instead of a kinetic bounce effect in iOS, Honeycomb uses a glow effect to signal that the end of the menu has been reached. This is also implemented in 2.3 Gingerbread, but the original idea stems from Android 3.0. 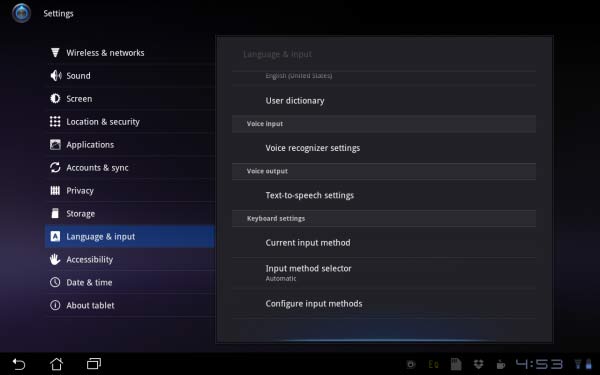 Notice the subtle blue glow on the bottom of the selection.

Click on page 3 to go to Part 3: Official Google Apps